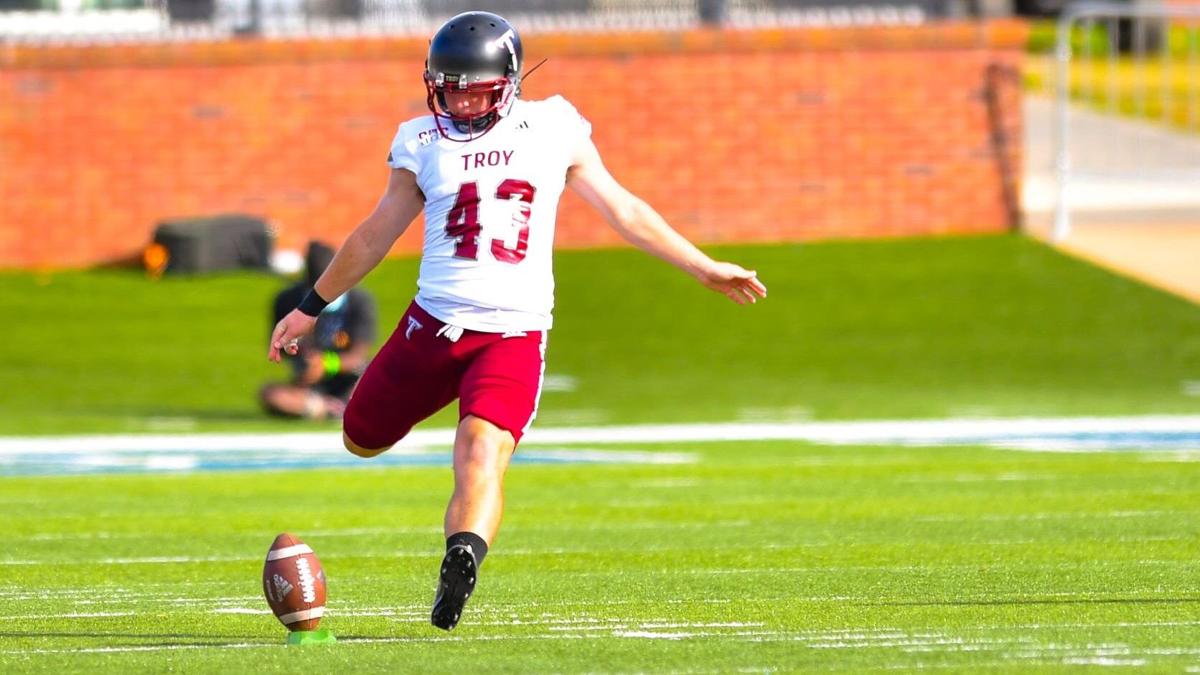 Dothan’s Jack Martin, seen with Troy last year, has committed to play football at Alabama after entering the transfer portal.

Calling it an opportunity to compete on the “biggest stage,” former Northview kicking standout Jack Martin announced on Twitter he has committed to play football next year for defending national champion Alabama.

Martin spent the last two years as a punter and kicker at Troy before entering the transfer portal on April 28. He has three years of eligibility remaining, thanks in part to the recent NCAA ruling to allow an extra year of eligibility to all college athletes because of the COVID pandemic.

“My dream has always been to play at a big school – a huge school,” Martin said in a Dothan Eagle interview Saturday about going from Troy to Alabama. “That is my dream – to play on a big stage. I have always wanted to do that.”

Now, he will get to do that at Alabama.

The Dothan native finished this past season as a first-team All-Sun Belt Conference honoree at Troy after leading the nation in net punting with 45.8 yards. Opponents returned only four punts for seven total yards.

He was fifth nationally in punting average at 46.1 yards a punt. Eight of his 25 punts were 50 plus yards and he placed six inside the 10. None went for touchbacks.

The 6-foot-2, 222-pounder was also a standout on kickoffs for the Trojans, averaging 56.9 yards per kickoff with 19 of his 49 kicks going for touchbacks.

He will have an opportunity to do both at Alabama. Last year, the Tide averaged just 38.0 yards per punt behind the combined efforts of Charlie Scott (39.2) and Sam Johnson (35.4). On kickoffs, Will Reichard averaged 52.4 yards a kickoff and Chase Allen 49.5. All four players remain on the Tide roster.

Reichard is also the incumbent on field goal and extra-point kicks. A year ago, he hit 14-of-14 field goal tries and 84-of-84 point after kicks.

“They definitely said I would be competing for the spots,” Martin said of punting and kickoffs. “Obviously nothing is given to anybody, especially at Alabama. You have to earn it. They want me to compete for the punting and kickoff job.

“Obviously, they had a real strong field goal kicker last year – Will Reichard. They want me to be almost a back-up for Will if something happens to him or he injures himself.”

Martin said he loved playing at Troy, but felt it was a good time to look for a better opportunity. He said Alabama was a good fit for him as far as potential playing time.

The 2019 Northview graduate said he talked to a handful of programs while in the transfer portal, including Arkansas State, Texas Tech and some smaller schools. He also said he had some interest from LSU.

“I thought it was a good opportunity, not just because it is Alabama – obviously, a lot of people say, ‘I want to go to Alabama,’ but I really looked at it as an opportunity to get on the field because that is what everybody wants – to play,” Martin said. “The plus is obviously being a part of the Alabama football program, but I think it is going to be a good fit for me.

“I talked to a few schools and felt Alabama was the best opportunity for me and felt like it was a good fit for me, especially punting and kicking off wise. I thought it would be a good opportunity for me to hopefully play. That is the goal. I wouldn’t be going if I didn’t think I could play.”

While it didn’t really play a role in his decision, Martin said he also liked Alabama because it had a finance school. He is majoring in finance and plans to earn his degree next May.

Martin said the timing of his decision was also good in that the NCAA is allowing transfers this year without having to sit out a year, meaning he can play right away next year.

In entering the transfer portal, he felt he had established a good body of work at Troy that would attract other programs.

“After the season I had last year, I felt like I developed a good platform for me to find somewhere,” Martin said.

He noted he had an advantage over other players in the transfer portal who had only one or two years of eligibility remaining.

“Nobody has three years (left) that has had college experience,” Martin said.

He announced on Twitter two weeks ago that he was entering the transfer portal.

“I appreciate the opportunity Troy University gave me and all the support Troy has given me. Troy will always have a special place in my heart... Thanks,” Martin said in the tweet.

He reaffirmed that thought on Saturday.

“I love Troy,” Martin said. “They were awesome to me. I love Troy’s program.”

With his commitment to Alabama in the books, Martin doesn’t have much time before reporting to the defending national champions.

“I am really excited to get to work,” Martin said. “I actually will be up there when summer workouts start next week. I am ready to get up there to compete and play on the biggest stage – That is the goal. I am excited about it.”

What sports are most affected by weather?

Alabama football will hold its homecoming game against Tennessee on October 23, the university announced in a release of events for this seaso…

Tide, Tigers have two selected in NBA Draft for first time since 1987

For the first time since 1987, Alabama and Auburn had two players apiece selected in the same NBA Draft on Thursday night.

Will Brian Robinson Jr. be the go-to back for Alabama this season?

For the first time since 2015, a man with the last name of Harris won’t lead Alabama football in rushing attempts.

Oklahoma and Texas accepted invitations to join the Southeastern Conference in July 2025 on Friday, worried that their storied athletic progra…

Hall of Fame college football coach Bobby Bowden announced Wednesday he has been diagnosed with a terminal medical condition.

HOOVER — Alabama head coach Nick Saban’s ability to reload rather than rebuild will be tested once again this fall.

Dothan’s Jack Martin, seen with Troy last year, has committed to play football at Alabama after entering the transfer portal.