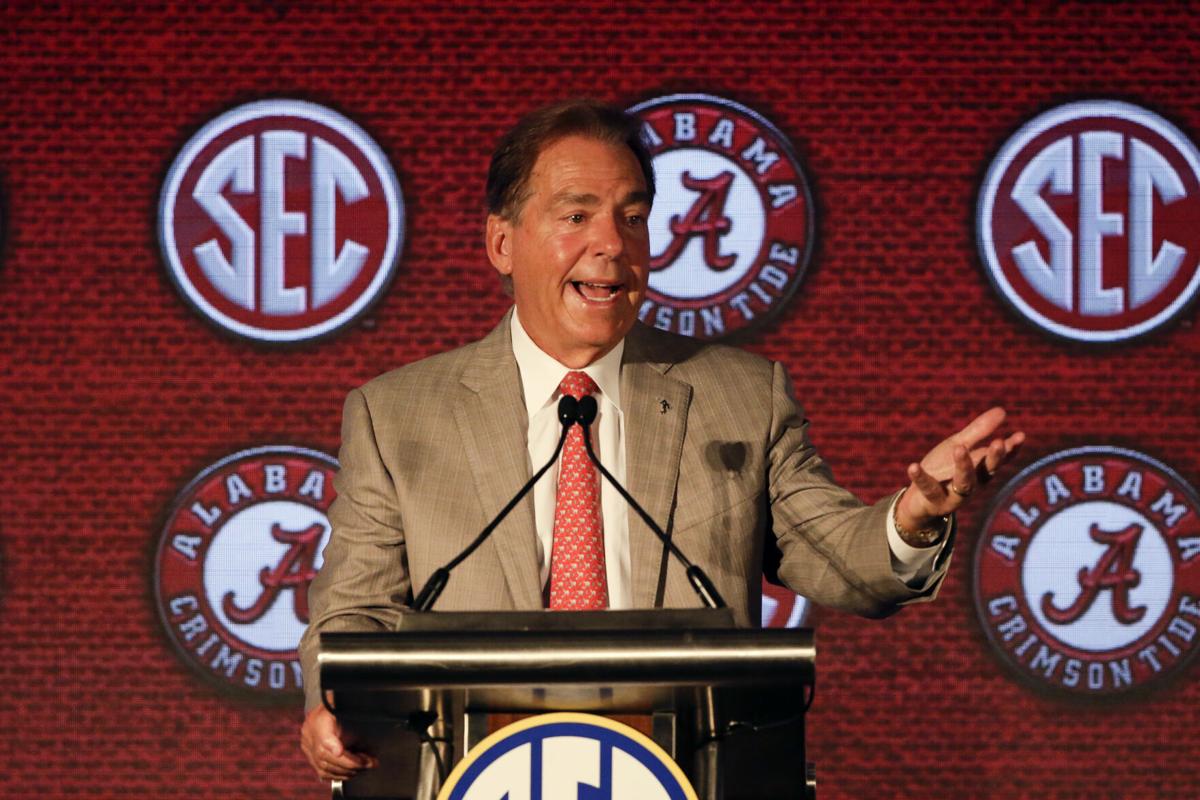 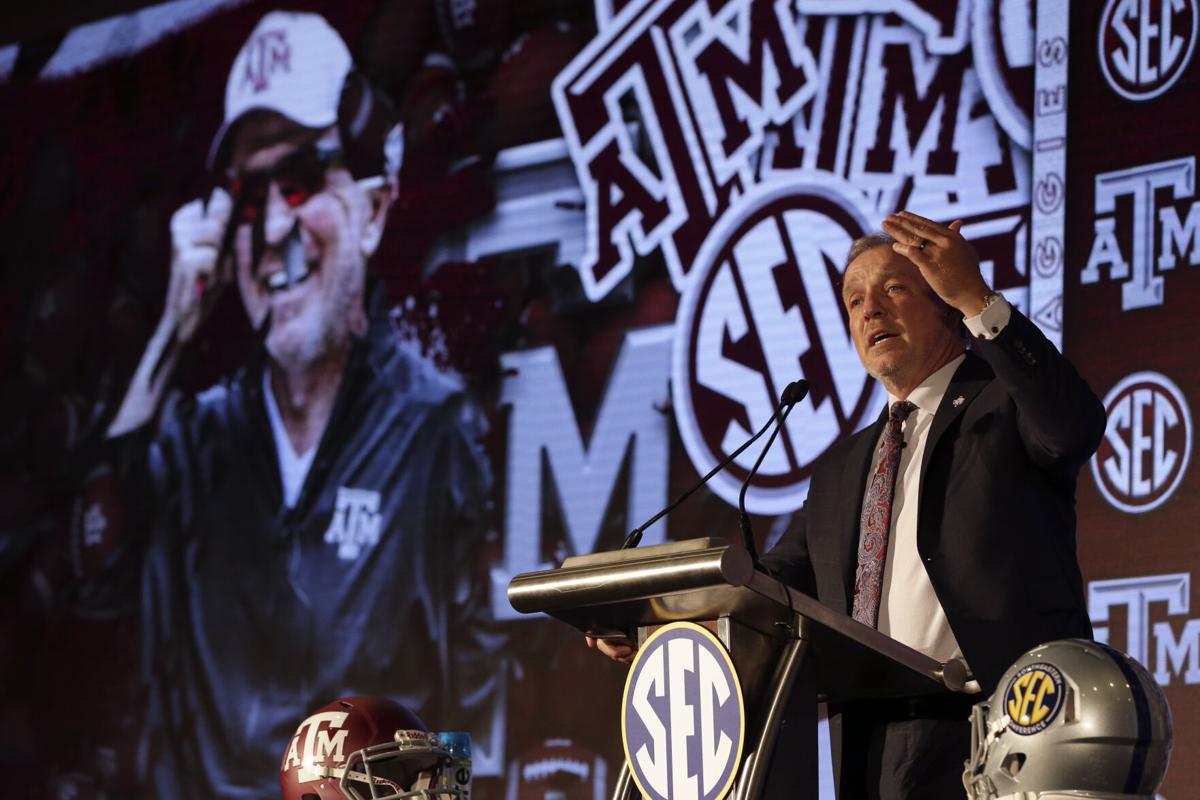 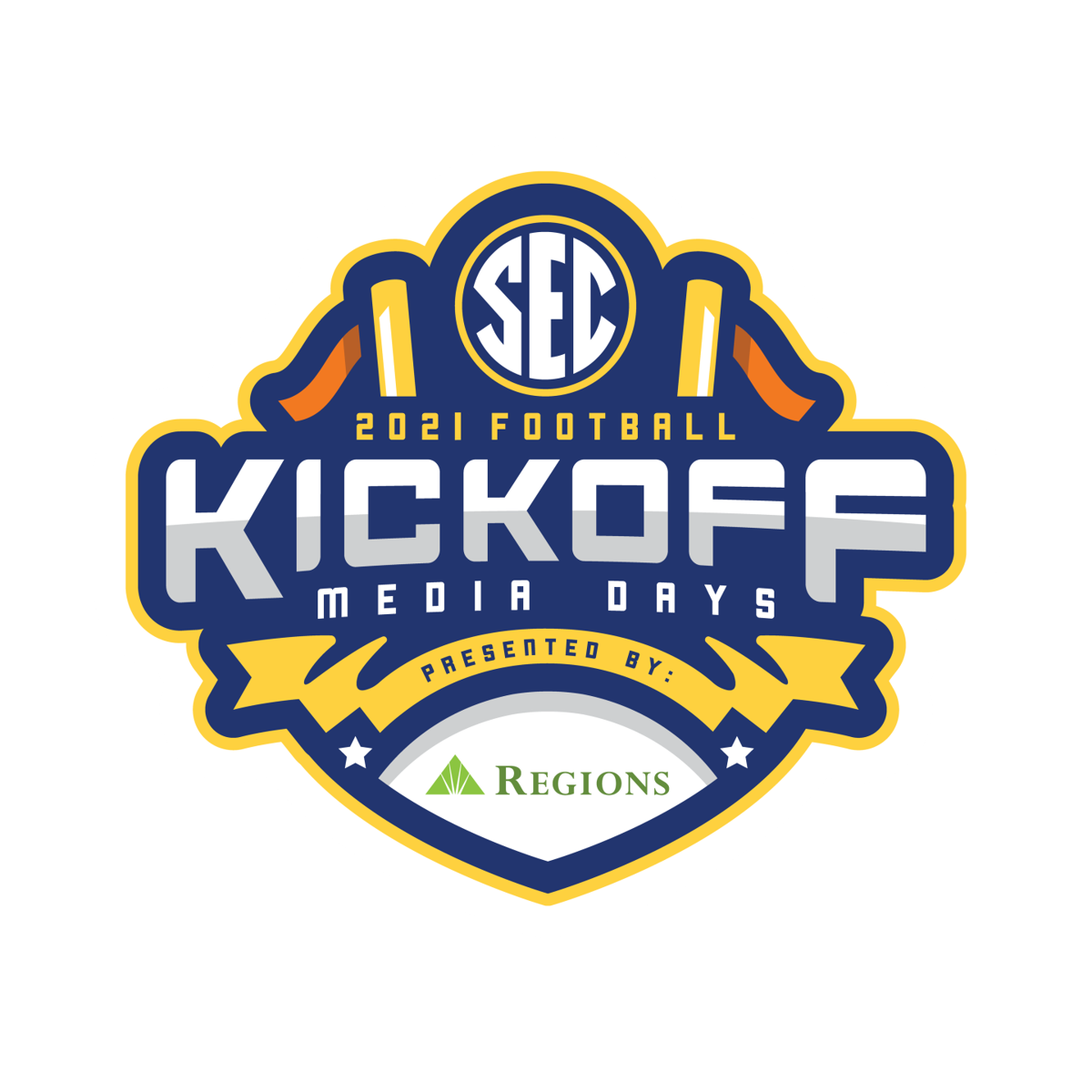 HOOVER — Alabama head coach Nick Saban’s ability to reload rather than rebuild will be tested once again this fall.

Saban was the main story at Wednesday’s session of SEC Media Days as the Crimson Tide tries to defend its national championship, the sixth during Saban’s time in Tuscaloosa. The veteran head coach explained Alabama’s run at another title is by no means a given, but he’s liked what he’s seen so far this offseason.

“The penalty for success when you win a national championship is you won because you had a whole lot of good players. They were well-coached, so you had a lot of good coaches,” Saban said.

“When you lose some of those players — and we lost six first-round draft picks and 10 guys overall in the draft and you lose some of those coaches to better opportunities — the challenge is you’ve got to rebuild with a lot of new players who will be younger, have new roles, less experience and how do they respond to these new roles? That’s why rebuilding is a tremendous challenge. That’s why it’s very difficult to repeat.

“I’ve been pleased so far with the way our players have embraced their new roles and new responsibilities, how the new faces on our team have worked hard to develop in a way that they can have enough consistency in performance to have success and develop the confidence they need to be able to have success.”

Saban pointed out Alabama will be breaking in eight new starters on offense, and while the team does return roughly eight starters on defense he noted the Crimson Tide have several difficult games to start the 2021 season. He described this year’s squad as a work-in-progress and said the focus across the board will be improvement.

While the Crimson Tide will feature several unproven pieces this fall, the team remains one of the favorites to be in the hunt for the national title. It’s become the standard under Saban, who stands as the conference’s longest-tenured head coach as he enters his 15th season at Alabama.

When asked about his longevity in the SEC, Saban made it clear the primary reason was an obvious one.

“I think it’s probably good players, good coaches and supportive administration that gives you the tools that you need to be able to continue to provide the resources to help the players be successful are all probably key ingredients of that.”

Saban talks NILSaban drew some attention on Tuesday when he spoke at the Texas High School Coaches Association’s annual convention and mentioned sophomore quarterback Bryce Young had agreed to endorsement deals that altogether were worth “almost seven figures.”

Saban began his media session Wednesday by saying his current opinion on the new issues in college football such as name, image and likeness would not be as informed as they would be in, say, one year since he’ll have more experience and will understand all the ramifications.

When asked about his comments regarding Young’s deals, Saban explained players have always been able to work outside of football and make money and that the key now is for the program to help them make the most of the sport’s new landscape.

“All we’ve done is create an opportunity for players to work,” Saban said. “The only thing is, the question is because it’s not going to be equal and everything that we’ve done in college athletics in the past has always been equal.

“Everybody’s had equal scholarship, equal opportunity; now that’s probably not going to be the case. Some positions, some players will have more opportunities than others, and how that’s going to impact your team, our team, the players on the team. I really can’t answer because we don’t have any precedent for it.

“I know that we’re doing the best we can to try to get our players to understand the circumstance they’re in, the opportunity they have, and how those opportunities are not going to be equal for everybody.”

Mississippi State head coach Mike Leach has a history of providing off-the-wall answers during his press conferences. While Leach did offer a few gems Wednesday, he also gave his pitch for keeping competitive balance with NIL now in effect.

Leach explained he wants to see schools encourage players to graduate and offered the pitch of universities giving a player $100,000-to-$150,000 upon graduation, an amount that would be forfeited if they decided to transfer.

Leach added the amount isn’t his main concern; making sure a competitive balance remains in the sport is.

“The amount [we would pay the players] could be whatever. I just don’t want a bidding war, and I think that, if we end up with bidding wars, that will definitely hurt football,” Leach said. “I think we’ve got to keep an eye on encouraging people to graduate and not making it so enticing to transfer.”

And now for one of those Leach gems.

Leach was asked on Wednesday about rumors he was on the cusp of being hired as Tennessee’s head coach two years ago when the Volunteers ultimately fired then-athletic director John Currie.

Leach didn’t hesitate in acknowledging his candidacy for that job and also made sure to mention Currie’s fate in Knoxville.

“I talked to Tennessee. Nothing ever got nailed down. Then they had a coup d’etat,” Leach said. “You can sort that out amongst yourselves. I didn’t end up in the middle of a coup. Lucky for me.”

After just missing the College Football Playoff last season, Texas A&M is aiming to break through in 2021.

There is, of course, the elephant in the room that could once again prevent such success.

Earlier this summer, Texas A&M head coach Jimbo Fisher spoke about beating Alabama while Saban is the head coach. Fisher was asked about those comments Wednesday, and he made it clear he did not regret the comments while also expressing his admiration for Saban.

“He’s the standard, and the standard is what you have to play to — just like the standard at Florida State to take over the ACC and go win a national championship.

What sports are most affected by weather?

Alabama football will hold its homecoming game against Tennessee on October 23, the university announced in a release of events for this seaso…

Tide, Tigers have two selected in NBA Draft for first time since 1987

For the first time since 1987, Alabama and Auburn had two players apiece selected in the same NBA Draft on Thursday night.

Will Brian Robinson Jr. be the go-to back for Alabama this season?

For the first time since 2015, a man with the last name of Harris won’t lead Alabama football in rushing attempts.

Hall of Fame college football coach Bobby Bowden announced Wednesday he has been diagnosed with a terminal medical condition.

Oklahoma and Texas accepted invitations to join the Southeastern Conference in July 2025 on Friday, worried that their storied athletic progra…