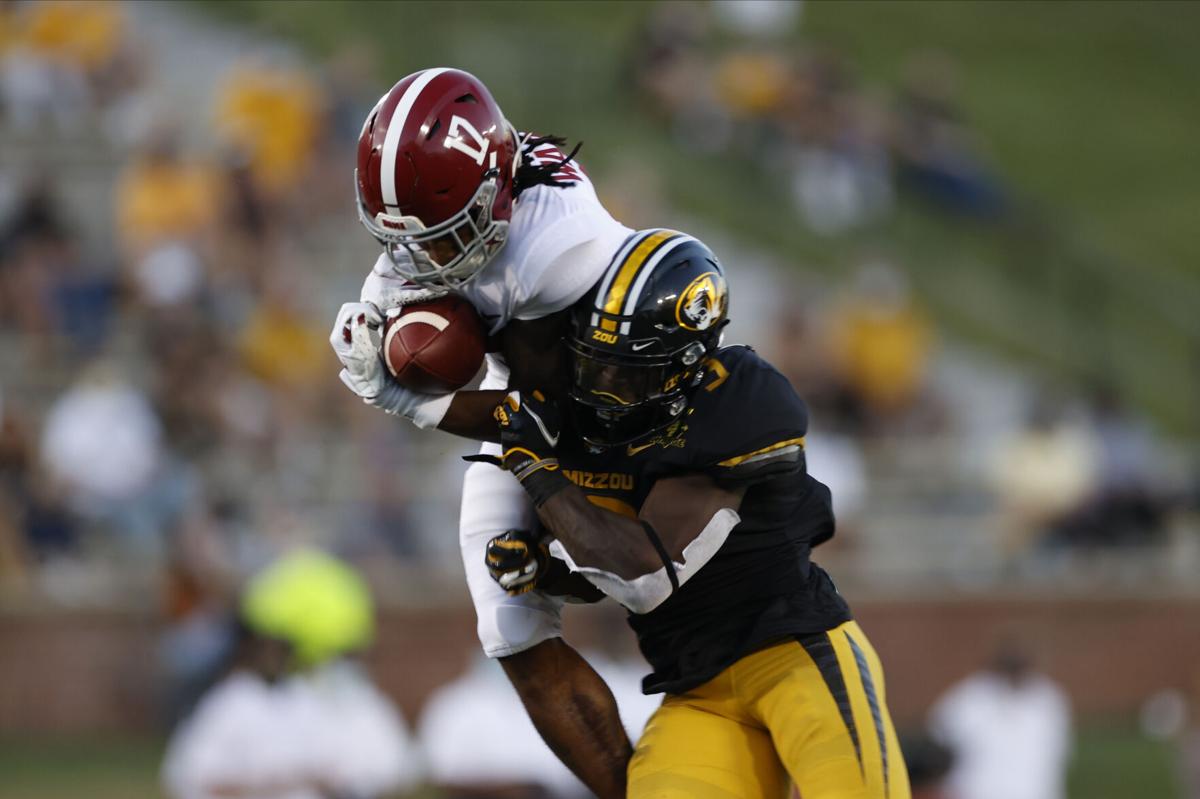 Alabama wide receiver Jaylen Waddle (17) earns a catch during the first half against a Missouri defender. 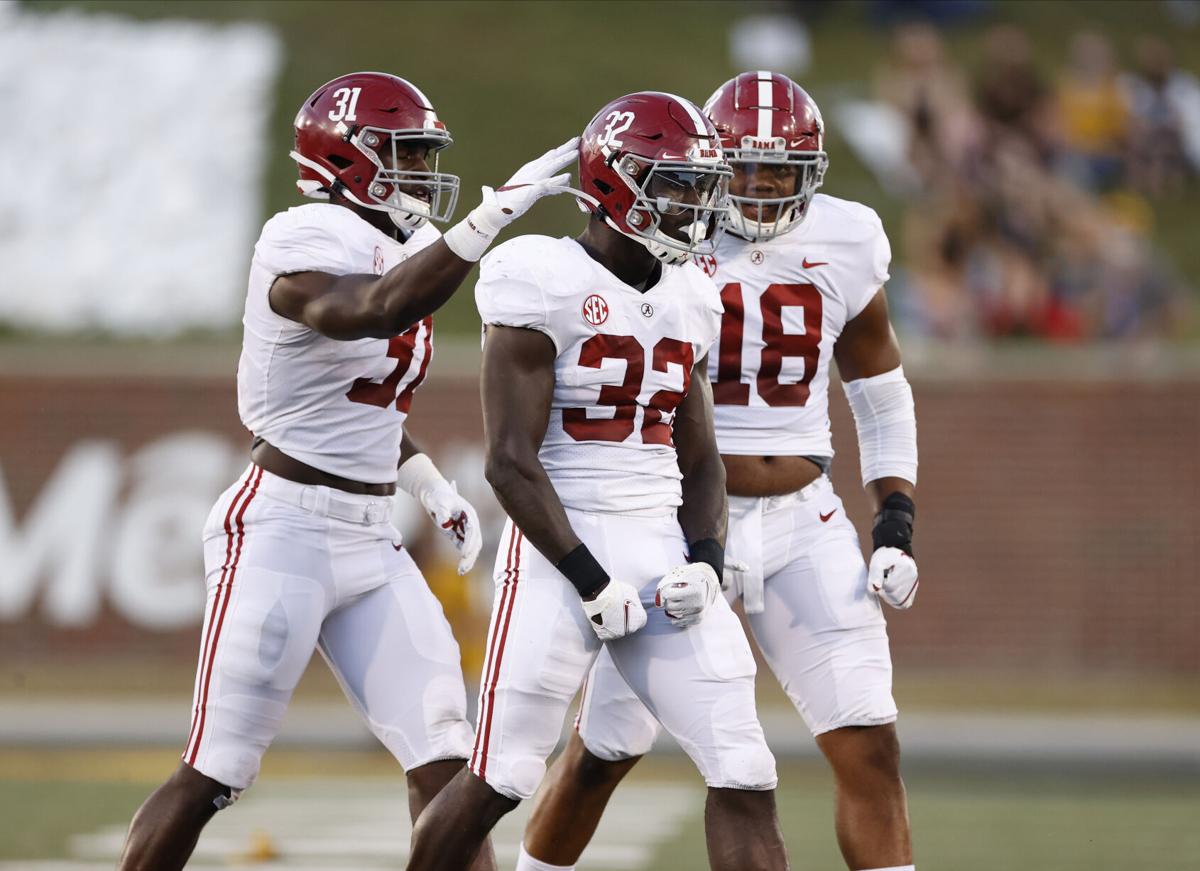 Tide players, including Dylan Moses, celebrate a play during Saturday's win over Missouri. 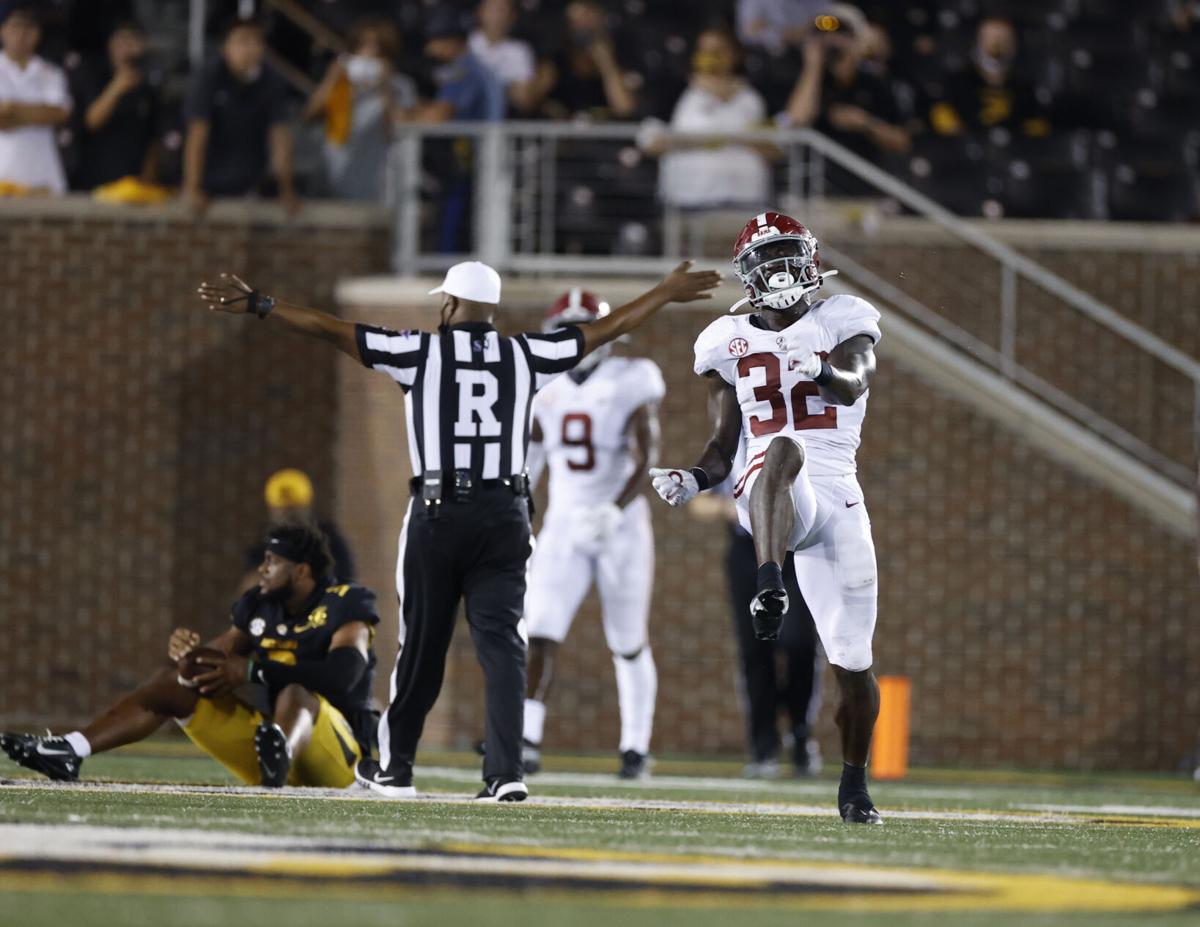 BRETT HUDSON For the Eagle

COLUMBIA, Mo. --- Alabama’s 21 unanswered points in the first 15 minutes, 23 seconds of the game began a convincing 38-19 win over Missouri.

Here are three things we learned from the game.

Junior wide receiver Jaylen Waddle knew this was his season to break out. After two seasons of playing behind Jerry Jeudy and Henry Ruggs III, he would be the primary threat to pair with DeVonta Smith.

He did his best to prepare for a new set of responsibilities. The early returns were convincing.

Waddle exited the game with eight catches for 134 yards and two touchdowns. The seven catches were a career high and the 134 yards were four yards shy of tying his current career high, set in 2018 against Louisiana-Lafayette.

Waddle did not get a chance to return a kick or punt — where he made his biggest impact last year — but one game was enough to show Waddle won’t have to wait for kicks and punts to make his presence known. Waddle, after all, was the target of 10 of Alabama’s 32 pass attempts.

Miller Forristall, Cameron Latu, Carl Tucker and Jahleel Billingsley were all seen early and often in the game. Only Forristall had an impact as a pass catcher — one reception for 34 yards — but the rotation among the three showed UA will use its wealth of depth at the position in multiple ways.

Forristall was a receiving threat last season before his throat injury, catching 12 passes for 131 yards and three touchdowns in the first eight games. Tucker was a receiving threat in his career at North Carolina. Latu and Billingsley have played too little to know anything of their skill sets, but that could change if the usage against Missouri extends through the rest of the season.

Inside linebacker play has improved

It was safe to assume the return of All-SEC linebacker Dylan Moses to the Crimson Tide’s defense was going to help, and it did. Moses contributed two tackles for a loss and kept UA’s defensive positioning in order for the most part, which was problematic at times in 2019.

Moses’ partner in the middle, Christian Harris, showed development from his freshman to sophomore season. Like Moses, he added two tackles for a loss and a sack in six tackles, tied for second on the team.

A more experienced defensive line should help UA’s defense improve against the run, evidenced against the Tigers by LaBryan Ray’s four tackles, one for a loss. But Alabama’s defense will live and die with its inside linebacker play, and the season opener was a step in the right direction for that position group.

TUSCALOOSA — Najee Harris has developed a reputation as a finisher. Of his 21 touchdown runs in his last 10 games, 15 of them have been of 6 o…

Rushing touchdowns by three different players and a defensive touchdown contributed to another Alabama victory over Tennessee, 48-17

KNOXVILLE, Tenn. — Losing their most dynamic player left Alabama in no mood to celebrate — not even a big win over a longtime rival.

Alabama has given up plenty of long passing plays, but it hasn’t always been forced to defend deep passes.

TUSCALOOSA — As Alabama’s offense has proliferated in its new pass-forward era, it has found a consistent foil.

Little changed in Tide play calling after loss of Waddle

TUSCALOOSA --- When Alabama lost Jaylen Waddle for the game, and then the season, on the opening kickoff against Tennessee this past Saturday,…

TUSCALOOSA — Replacing LaBryan Ray is more than replacing Alabama’s most experienced defensive linemen and its best defensive end. Alabama has…

Alabama has dominated Tennessee over past 13 seasons

TUSCALOOSA — It’s one thing to own a streak of 13 straight wins against a rival. It’s another to completely dominate the rival over most of th…

Alabama wide receiver Jaylen Waddle (17) earns a catch during the first half against a Missouri defender.

Tide players, including Dylan Moses, celebrate a play during Saturday's win over Missouri.