Auburn wide receiver Kobe Hudson (5) flips in the air as he is tackled by Georgia State linebacker Jordan Veneziale (40) during the first half of an NCAA football game Saturday, Sept. 25, 2021, in Auburn, Ala. 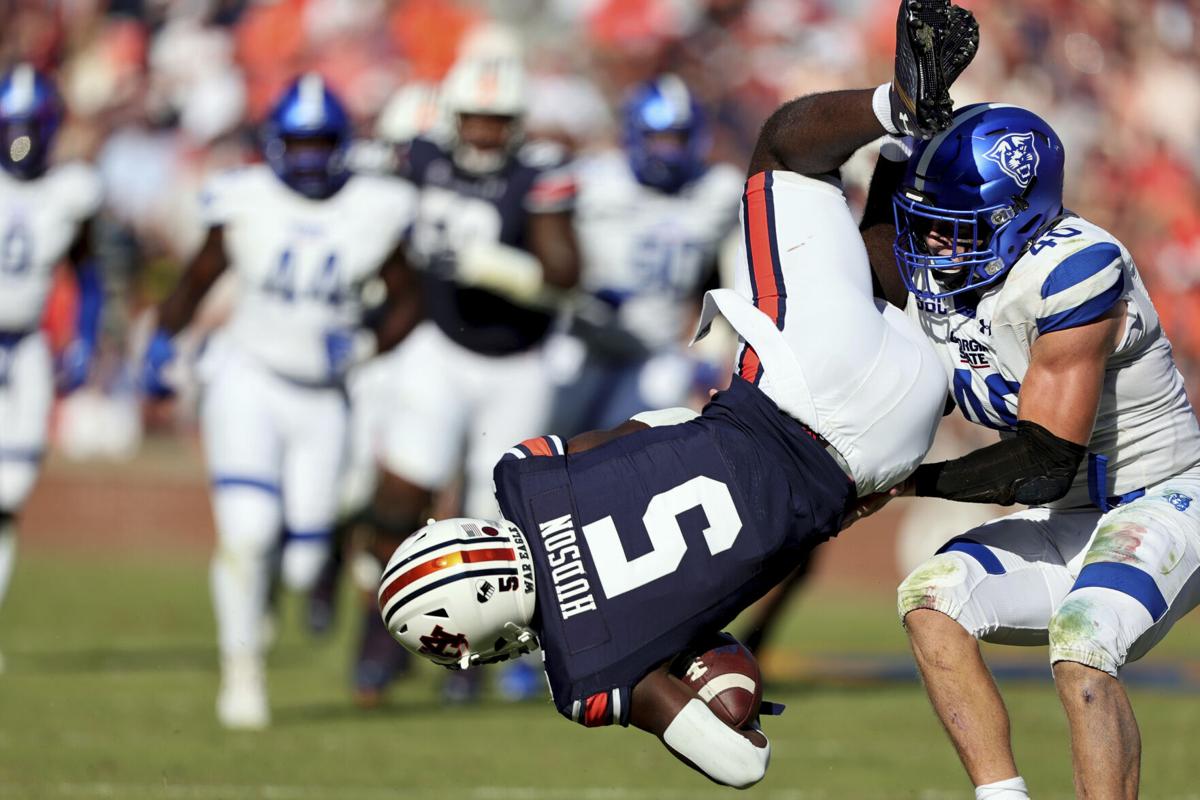 Auburn wide receiver Kobe Hudson (5) flips in the air as he is tackled by Georgia State linebacker Jordan Veneziale (40).

AUBURN --- In the biggest moment of his young Auburn career, backup quarterback TJ Finley delivered when the Tigers were on the verge of a demoralizing upset loss.

Finley scrambled out of trouble, collected himself and fired a touchdown to Shedrick Jackson on fourth-and-9 late in the fourth quarter to help lift Auburn over Georgia State in a 34-24 victory.

Finley stood as the big storyline of the game as the sophomore quarterback replaced Bo Nix for the Tigers’ final five drives of the victory, capped by a game-winning 98-yard drive.

“I saw some pressure coming from the left side; I’ve never done this before, but I spun off the tackle and Shed did an amazing job coming open and catching the ball and coming down with it,” Finley said. “It was amazing. It was a great feeling.”

Finley led the Tigers on an 88-yard drive to the Georgia State 10-yard line when a short run on first down followed by consecutive incompletions left Auburn in do-or-die mode on fourth down. Rather than panic, the LSU transfer kept his cool and made his first real chance to play quarterback on the Plains one worth remembering.

Finley took the shotgun snap on fourth down, quickly dropped back and scrambled backward with two Panthers charging in. He swiftly juked past the two would-be tacklers and fired toward the end zone at Jackson, who had a Georgia State defender closing in quickly.

The Panther in pursuit failed to reach Jackson, who jumped up, secured the ball and came down for the go-ahead score.

“It was a broken play,” said Jackson, who had four receptions for 70 yards and one score. “TJ did a great job of scrambling and keeping his eyes downfield and just finding somebody to throw the ball to him.

“When I saw him, I just knew he was going to throw it. I had to make a play.”

Finley then connected with Kobe Hudson on the ensuing 2-point conversion to give the Tigers a three-point lead with 45 seconds to go in the game.

Finley ended the game 9-of-16 passing for 97 yards and one touchdown.

As exciting as Finley’s touchdown pass to Jackson was, the Tigers couldn’t truly relax until safety Smoke Monday officially ended the Panthers’ upset hopes on the next drive.

Needing something in a hurry, Georgia State quarterback Darren Grainger fired a pass downfield right at Monday, who took advantage of the situation. He grabbed the interception then raced to his left, where he found blocking and plenty of room to run on a 36-yard pick six.

Monday’s score and Anders Carlson’s extra point made it a 10-point contest with 31 seconds to go in the game.

Auburn’s comeback looked like wishful thinking until both the Tigers’ defense and special teams rose to the occasion after halftime.

With the Auburn offense still stagnant well into the third quarter, the Tigers’ special teams came through with a momentum-shifting moment.

After the Tigers’ defense forced a three-and-out, Auburn’s Caylin Newton rushed the Panthers’ punt and got a hand on the football, which sent it careening toward the end zone. Barton Lester – who scored on a blocked punt against Arkansas last October – raced to the ball and recovered it in the end zone to help cut Georgia State’s lead to 24-19 with 4:44 left in the third quarter.

The blocked punt came after the first of what proved to be four consecutive three-and-outs forced by the Auburn defense, which only gave up just 85 yards in the second half after struggling mightily to open the game.

Saturday’s first half saw the Tigers fail to capitalize in several big moments while the Panthers pounced on nearly every opportunity.

Both teams traded field goals through the opening minutes of the first quarter before Carlson pushed the Tigers ahead with a 23-yard field goal with 2:57 left before the second.

The Panthers answered with a commanding 15-play, 75-yard drive that ended when Darren Grainger found Jamari Thrash all alone in the end zone on a 12-yard pass early in the second quarter.

Georgia State’s go-ahead score – which created a 10-6 contest – proved just the start of a disastrous series of plays by the Tigers’ defense.

The Panthers scored touchdowns on their next two drives after the Grainger-to-Thrash score. Grainger pushed Georgia State’s lead to 17-9 when he again spotted a wide-open Panther in the end zone – this time Roger Carter – and hitting him for a touchdown.

On the next Panthers possession, running back Tucker Gregg broke free on a 50-yard touchdown run to hand Georgia State a 12-point lead with only 1:56 to go until halftime.

Georgia State’s offensive success coincided with lackluster play by the Tigers’ offense. From the Thrash touchdown reception to the Gregg touchdown run, all Auburn could muster were two more Carlson field goals.

The tension in Jordan-Hare Stadium was palpable just before halftime. After a fumbled snap on Auburn’s last offensive play of the second quarter ended with Nix wildly scrambling then firing the ball out of bounds, the fans rained boos on the Tigers to close out a first half all involved hoped to forget.

Auburn returns to action Saturday when the Tigers play at LSU.

Auburn looks to capitalize on running the ball against Arkansas

FAYETTEVILLE, Ark. — Following a crucial fourth-down stop by the defense, Auburn didn’t hesitate to try and land the knockout blow against Ark…

Auburn’s victory over Arkansas on Saturday could be perfect timing for the Tigers.

Auburn wide receiver Kobe Hudson (5) flips in the air as he is tackled by Georgia State linebacker Jordan Veneziale (40) during the first half of an NCAA football game Saturday, Sept. 25, 2021, in Auburn, Ala.

Auburn wide receiver Kobe Hudson (5) flips in the air as he is tackled by Georgia State linebacker Jordan Veneziale (40).