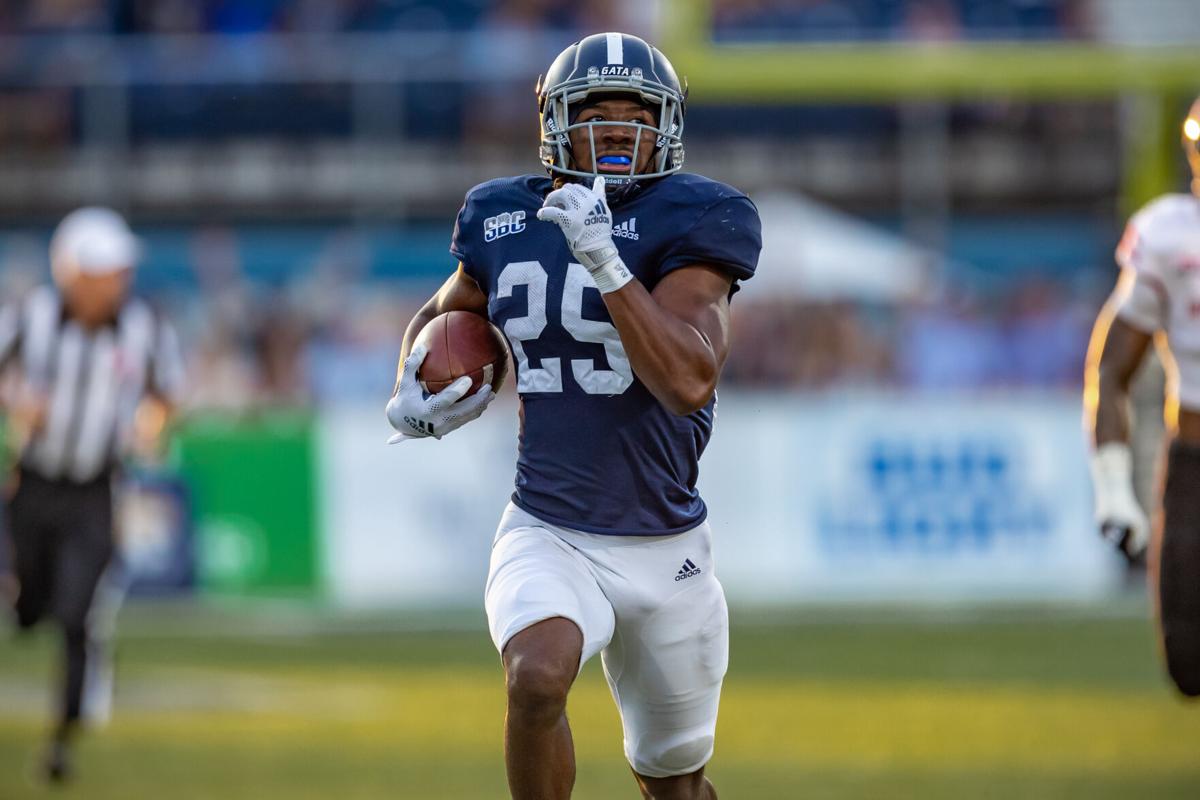 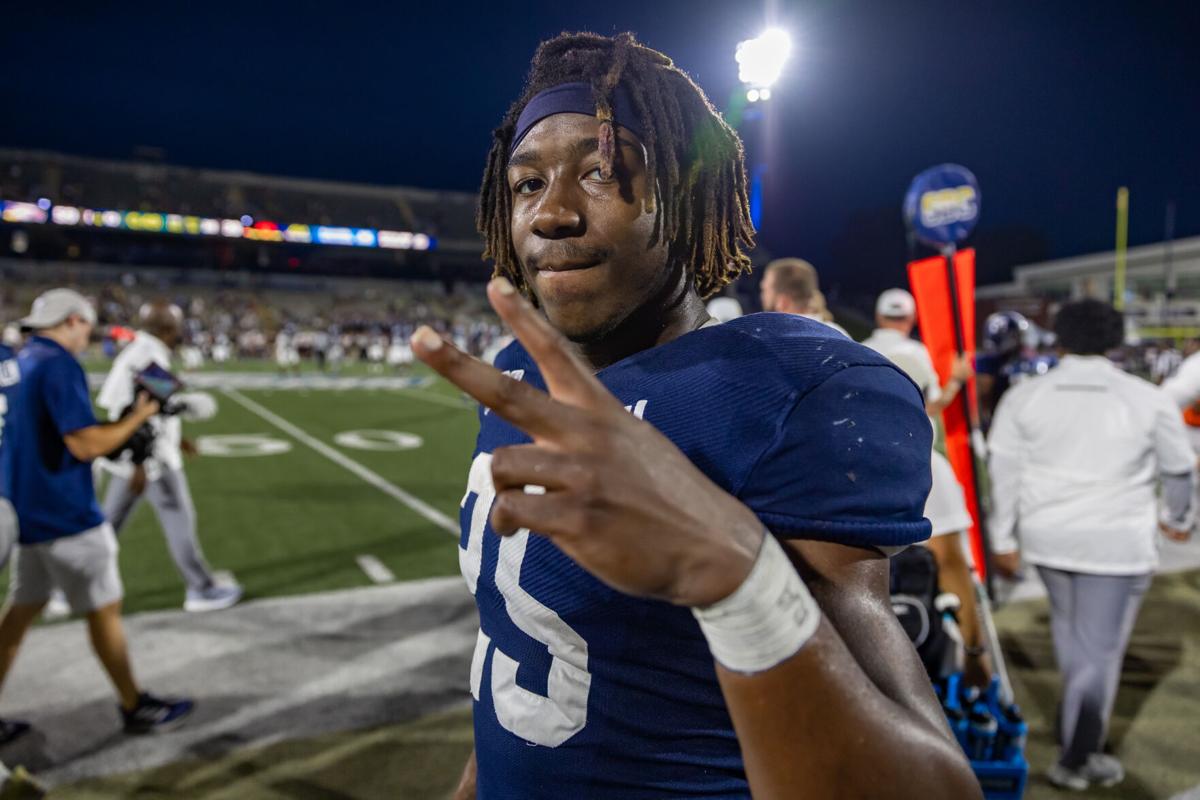 As a record-breaking running back at Daleville High School two years ago, Jalen White admittedly had a chip on his shoulder during the college football recruiting process.

It’s still there to an extent.

“In high school, I didn’t feel like I got the looks that I thought I would, but you know, everything happens for a reason,” White said during a phone interview this week.

“Every day I just try to go to work with a chip on my shoulder and that’s the stuff that motivates me to keep going and everything.”

White is starting to earn his stripes as a sophomore running back at Georgia Southern. In last week’s 59-33 win over Arkansas State, White rushed for 154 yards on 14 carries and scored on touchdown runs of 59 and 47 yards.

It was the best performance of his college career and he hopes to keep rolling as the Eagles visit Troy this Saturday for a 6 p.m. kickoff. Georgia Southern is 2-3 overall, 1-1 in the Sun Belt, while Troy is 2-3 overall, 0-1 in conference play.

“Coming back home is going to be pretty cool because I know I’ve got some friends that are coming to watch the game, so it will be special to play in front of them for the first time (as a college player),” White said.

Despite leading the nation in rushing as a senior for Daleville with 3,517 yards, which set an Alabama High School Athletic Association single-season record, Troy was among the colleges that bypassed on offering White a scholarship.

“With the recruiting process, yeah I did talk to Troy, but they just never threw out the offer,” White said. “It is what it is.”

As a high school senior, White tied the state single-game scoring record with eight touchdowns against Barbour County, each of those scores coming in the first half. He compiled more than 5,000 career rushing yards and was named the AHSAA Class 2A Back of the Year and the Dothan Eagle Super 12 Player of the Year following his final prep season.

Troy head coach Chip Lindsey was certainly interested in White, but decided to go in a different direction deep in the recruiting process.

“I know he went to camp here and was very impressive and had a great high school career right down the road,” Lindsey said this week. “Obviously each year you evaluate recruits and you’re looking at how many running backs you have, commitments and how many you can take and so forth.

“He was definitely a really good player that we were really high on, but when we got the commitment from Kimani (Vidal) who was in the same class with him, we were probably done with that class.

“But I’m very impressed with him. He looks like he’s improved tremendously. He’s a big, physical back and he’ll have a great career there at Georgia Southern.”

As a freshman at Georgia Southern, White played sparingly, mainly on special teams. During the offseason, he bulked up and it’s paying dividends. Coming out of high school, White was listed at 6-foot, 195 pounds. He’s now up to 215 pounds.

“I was working out four days a week, usually doing about two hours of working out and then also getting in my conditioning,” White said of the preseason. “I tended to do a little extra work on my own.

“I think it’s helped pretty good, because when I do get the reps to play in the game, I try to make sure I don’t go down on the first tackle. I think it’s paid off in that aspect.”

The run-oriented offense Georgia Southern employs is a drawing card for any running back. The Eagles average 291 yards per game rushing, which ranks fourth in the country.

“It’s pretty fun, because when you come here you know you’re going to get touches because we’re a run first offense,” White said. “Probably about 75 percent of our plays are running, so if you’re a running back, you’re going to have a good time. You’ve just got to be prepared when your time comes.”

The performance last Saturday was a coming out party of sorts for White.

“I try to give credit to the O-line,” White said. “The holes were opening up the right way. Even if you get wrapped up, just keep your feet going until the whistle blows. The rest will take care of itself.”

“Since he’s been here so long, he does a good job of breaking things down,” White said. “He knows defenses really well and he always has tips to give at practice.

“Like, he’ll say like, ‘Get your pads low, read defenses from inside out, always keep your eyes up – just some things like that. He’s knowledgeable with his experience.”

Georgia Southern made a coaching change following the fourth game of the season as head coach Chad Lunsford was fired and Kevin Whitley, who was the cornerbacks coach, was named the interim head coach.

“It was tough on the team, but we still have an opportunity to go get everything we want and achieve this season,” White said. “We have to use that as motivation. That’s the way we try to look at it.”

The Eagles responded in a positive fashion with the win over Arkansas State, which was the first with Whitley in charge.

“They’re very similar,” White said of the former head coach and the new one. “They are both positive and bring a lot of energy to the team and just want to win.

“That’s the mentality. Anything else is unacceptable.”

It didn’t take long for Clair Goodson to find her way back to the Wiregrass.

Five Auburn Tigers are preparing to play elsewhere in 2022.

It appears Auburn head coach Bryan Harsin is making a change on the offensive side of the ball.

The choice of Jon Sumrall as the new head football coach for Troy University appears to be a popular one among the Trojan Nation.

According to Bryan Harsin, he’s in no hurry to leave Auburn.

ATLANTA — Even with Georgia undefeated in 2021 and unanimous No. 1 in The Associated Press Top 25 for the eighth consecutive week, Nick Saban …

Alabama survives in 4OT over Auburn

AUBURN — It took four overtimes, plenty of antacids and players who refused to give in before Alabama finally walked off the field a 24-22 win…

Auburn’s Bo Nix to weighs options about next season

Auburn quarterback Bo Nix has some decisions to make in the coming weeks and months.