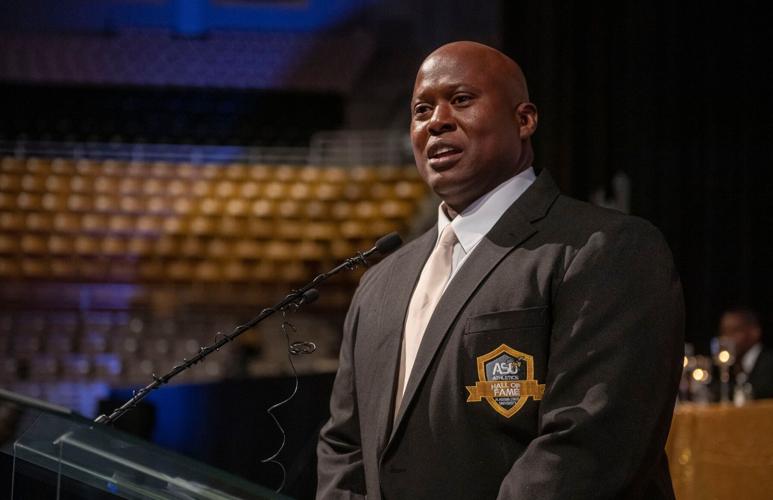 Slocomb native Brad Baxter, who was a star running back for Alabama State and the New York Jets, is shown during a recent induction ceremony into the Alabama State University Athletics Hall of Fame. 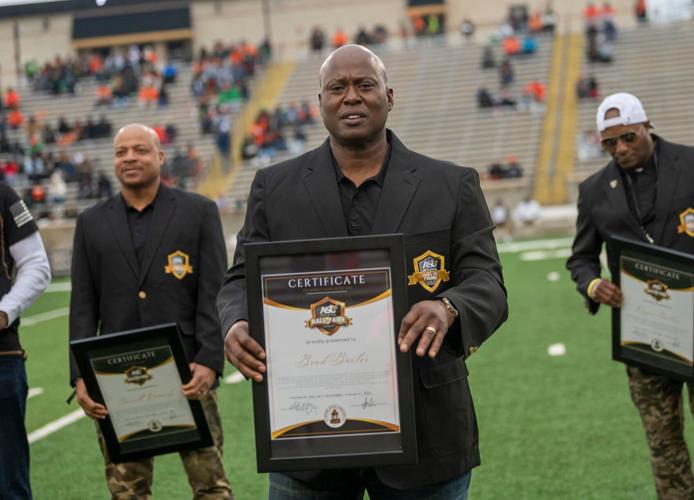 Brad Baxter is shown being recognized on the football field Nov. 12 before a game between Alabama State and Florida A&M.

Slocomb native Brad Baxter, recently inducted into the first class of the Alabama State University Athletics Hall of Fame, has found peace away from the football field.

“I focus on the most important things in life now,” Baxter said by phone Friday afternoon. “I’ve got a brand new grandbaby, who I’m with today.

“You know, a lot of times we weren’t able to do things like I’m able to do now, because you’re so occupied. There were other things you really thought that mattered, but they didn’t. I believe family is the most important thing.”

For the former star running back at Alabama State and in the NFL ranks with the New York Jets (1989-1995), a good day means sharing his Christian faith and spending quality time with his wife of 20 years, Debbie, at their home in Bonifay, Fla.

“I like to keep my life private because so many years it hasn’t been,” Baxter said. “Other than my church family, I just like to keep it that way.”

But two Fridays ago, Baxter was back in the spotlight on the Alabama State campus in Montgomery where he and 15 others were recognized during an induction ceremony and then honored on the football field the following day as Alabama State hosted Florida A&M.

“I’ve been back once since I played,” Baxter said. “It brought back a lot of memories. I’m very humbled, honored to be inducted. Everybody treated me and my wife with the most dignity.”

While there, he was three-time all-Southwestern Athletic Conference (SWAC) selection as running back, finishing with a school-record 3,728 career yards and 30 touchdowns.

“It meant the world,” Baxter said of his time at ASU. “I had teammates that we bled together, sweat together, and went out and competed together.”

Football was once at the forefront of Baxter’s life. From the small town of Slocomb to Alabama State and then into the pro ranks, Baxter established himself as one of the top fullbacks in the NFL once signing with the Jets as a free agent after not making the Minnesota Vikings roster as an 11th round draft selection in 1989.

“Yeah, it was a culture shock,” Baxter said of arriving in New York City. “A country boy from the South. You walk down the street and you’re happy speaking. They don’t do that; they look at you like you’re crazy.

“But I enjoyed it. The people always treated me nice in New York and I can’t say nothing bad about them.”

Baxter emerged as a star fullback for the Jets in 1990, rushing for 539 yards on 124 carries. Perhaps his best season came the following year when he had 11 rushing touchdowns, which ranked third in the NFL and led the AFC. That season, he also rushed for a career high 666 yards in helping the Jets make the playoffs. In 1992, he rushed for 698 yards and six touchdowns and was well established in the NFL.

In seven seasons with the Jets, Baxter rushed for 2,928 yards with 35 touchdowns along with being a tremendous blocking fullback.

During the offseason, Baxter would transport cattle from Alabama to Texas. There have been stories reported that Baxter fell out of favor with new Jets coach Rich Kotite in 1995 after showing up late for the first practice of the season. As the story goes, Baxter was detained for a required rest for 12 hours by the Department of Transportation during one of his cattle hauls after it was discovered through his logbook he had been on the road too long without a break, eventually causing him to miss a scheduled flight to New York for the first day of camp.

Baxter says he was stopped, but contrary to some reports, he wasn’t late for the beginning of mandatory practice.

“At the time it was a voluntary mini-camp,” Baxter explains. “I was a starting running back. Everybody else (veteran players) was going on vacation. You weren’t getting paid to come to voluntary camp.

“My business was my business at the time. The thing was, I enjoyed trucks and it wasn’t because of that (incident) that I got out of the game.

“It was about they (Jets) wanted to pay less for me to do a job that I knew what the job took. I was not willing to take less pay, because the simple fact is this – the guy behind me wasn’t ready.”

Baxter’s playing time dwindled under the new system with Kotite as the coach and he was released after the season, but has no regrets.

Instead, he’s never been happier.

“I tell you what, I’m a saved Christian,” Baxter said. “I believe different; I think different. Me and my wife take family trips.

“We believe in faith and family. Just relax and take one day at a time and enjoy life, because this life is short.”

He credits the senior pastor of Northside Assembly of God in Bonifay, Ed Bell, for putting him on the right path.

“Everybody has trials and tribulations in their past,” Baxter said. “A lot of people put God second when He should be first. I thought I was a Christian, but I really know I am now.”

While Baxter now resides across the Alabama state line, he still visits his parents – Herman and Bessie Baxter – regularly in Slocomb, a place near and dear to his heart where he first made a name for himself as a high school football star.

“That (football) is past tense … that’s what I used to do,” Baxter said. “That was my life at the time. I enjoyed it and I was blessed with the talent. But you’ve got to think about this, too: I had to start somewhere before I got there, which was Slocomb.”

“I’m not going to make my story sound better than nobody else, because it’s not no better than anyone else,” Baxter said. “It is what it is and I thank God that I’m healthy and I don’t have to work. My wife doesn’t have to work. We just live and enjoy ourselves and go to church and I love everybody.

“I can do whatever I want to do. I try to walk a mile a day and I stay active and I'm in pretty decent shape for my age.

TROY – By golly, the Troy fans pulled over the goal post in the south end zone and ran across the field with it in parts before taking it out …

Fresh off a Sun Belt Conference championship, the Troy football team learned Sunday afternoon it is bound for the Cure Bowl in Orlando to take…

Former Eufaula star Rodarius “Rara” Thomas, a sophomore who was a leading receiver for Mississippi State this season, announced via social med…

Troy senior linebacker Carlton Martial, the all-time tackles leader on the FBS level, came up short of winning the Burlsworth Trophy on Monday…

Troy football coach Jon Sumrall, who was named Tuesday one of eight finalists for the 2022 Eddie Robinson Coach of the Year national award, is…

Wesley McGriff is returning to Auburn for a third stint on the Tigers’ coaching staff.

70% of Portugal fans say Ronaldo should be dropped

70% of Portugal fans say Ronaldo should be dropped

Slocomb native Brad Baxter, who was a star running back for Alabama State and the New York Jets, is shown during a recent induction ceremony into the Alabama State University Athletics Hall of Fame.

Brad Baxter is shown being recognized on the football field Nov. 12 before a game between Alabama State and Florida A&M.