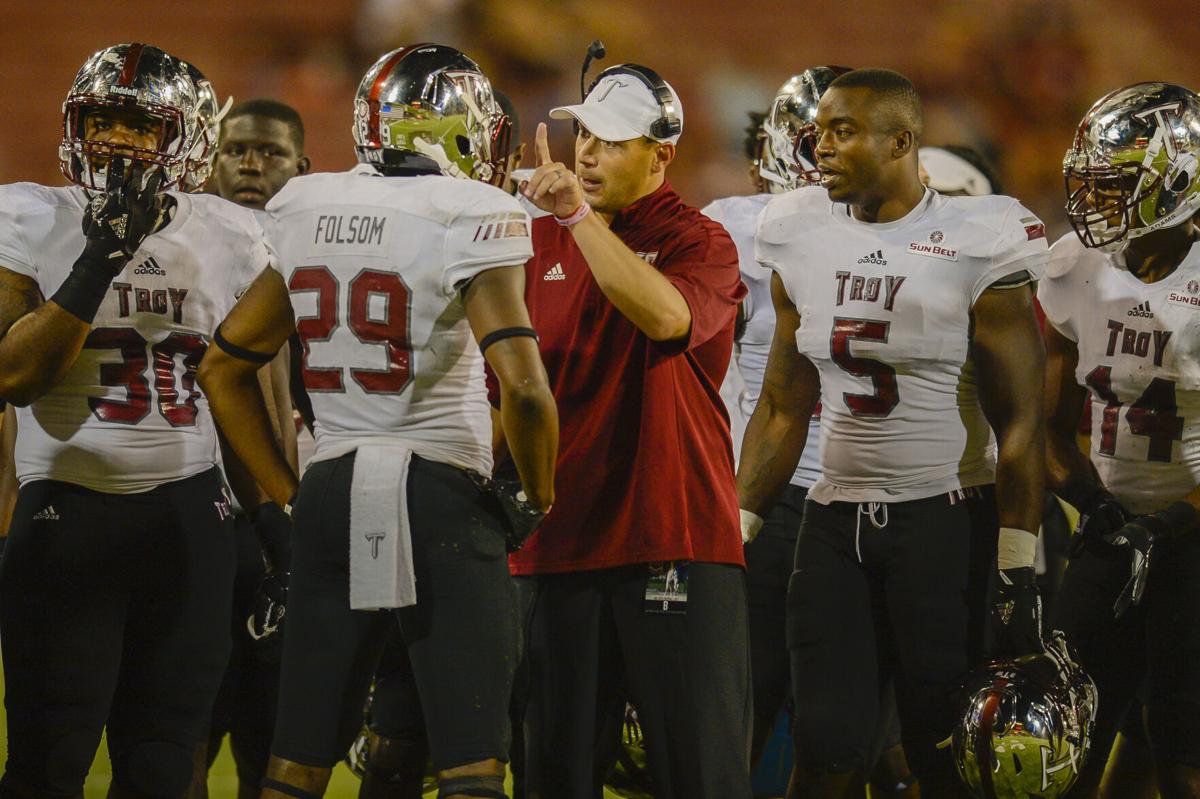 Jon Sumrall is shown during his first stint at Troy from 2015-2017 when he was assistant head coach to Neal Brown. 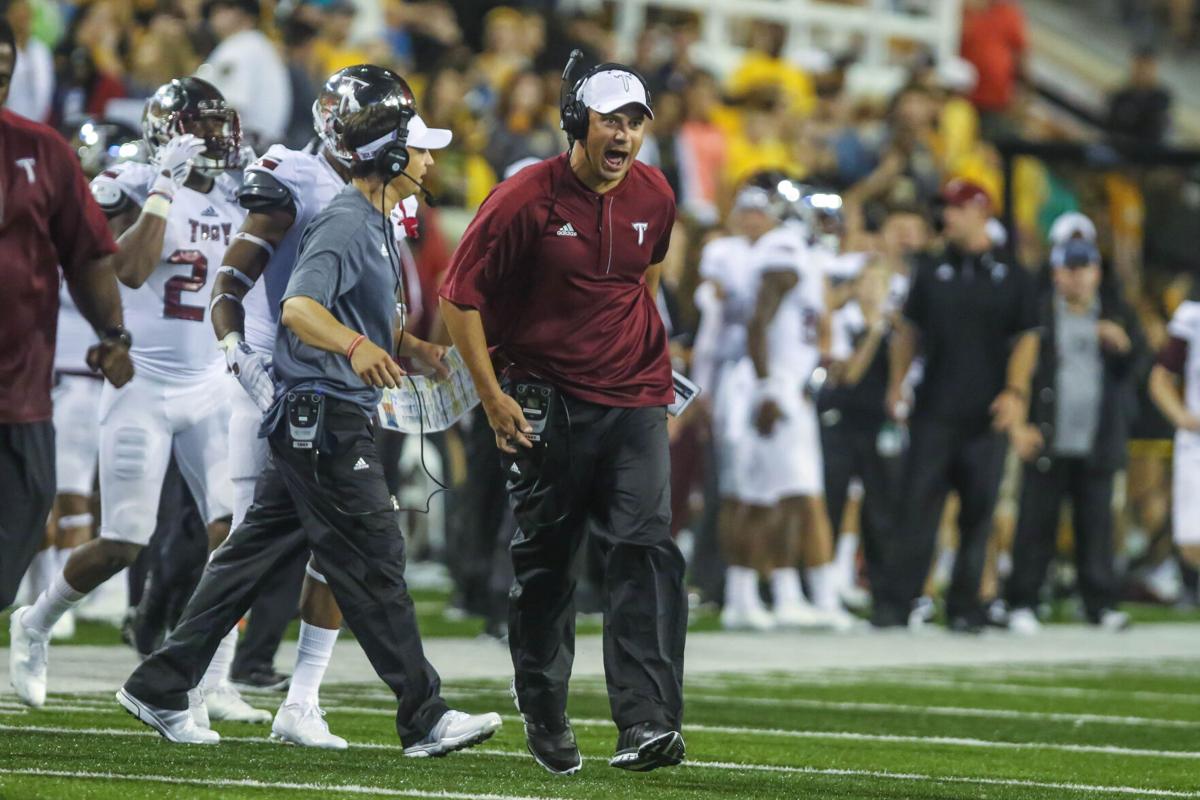 Jon Sumrall was named Troy’s new head coach on Thursday night after spending the past three seasons as an assistant at Kentucky.

The choice of Jon Sumrall as the new head football coach for Troy University appears to be a popular one among the Trojan Nation.

The hiring was announced Thursday night to bring the former Troy assistant and Huntsville native back to the school after he served the past three seasons in that role at the University of Kentucky. Sumrall spent one year at Ole Miss after leaving Troy and before going to Kentucky, where he was a linebacker during his playing days.

Dothan native and former Troy kicker Bratcher Underwood was a member of the team during Sumrall’s last stint at Troy under then-head coach Neal Brown from 2015-2017 and is excited to see him returning.

“He really gets you excited to play. If you’ve ever seen any videos of him or of him in person, he’s a ball of energy. Guys are going to want to come to Troy and they’re going to love Troy for what it is.”

Sumrall, who coached linebackers at Kentucky, was also co-defensive coordinator on Mark Stoops’ staff. During his time at Troy, he spent time as assistant head coach, linebackers coach and special teams coach.

“Really the first two years I didn’t get to interact with him too much personally except for team meetings and talking to him in the hallway since he was the linebackers coach, but then that last year he became the special teams coordinator,” said Underwood, who graduated in 2018.

“He reached out to me personally when we were playing if I wasn’t playing well or doing this or that and had things going on … whether that was a phone call or meeting at the fieldhouse, anything like that.

“He’s a genuine guy and has a lot of passion and fire.”

Sumrall was quoted about the impact Troy had on his family through a school release on Thursday following the hiring.

“Troy University and the Troy community left an indelible mark on our family,” Sumrall said. “I am humbled and extremely grateful to Dr. (Jack) Hawkins, (athletics director) Brent Jones and the entire selection committee for their trust in me to lead this storied football program.

“Ginny and I fell in love with Troy and can’t wait to return home and reconnect with the tremendous fan base. Troy Football has a proud tradition of success, and I look forward to leading this program back to a championship level.”

Trojans’ play-by-play announcer Barry McKnight learned about the positive impression Sumrall often leaves on people shortly after the coach was hired at Troy the first time.

“My brother Mike, who was writing for Sports Illustrated, was doing a story one time about a linebacker at Tulane named Nico Marley, who is Bob Marley’s grandson … a 5-9 guy who was making a zillion tackles and his position coach was Jon Sumrall down at Tulane,” McKnight said.

“He interviewed Jon about him and got what he needed and everything and wrote the story, and when Neal (Brown) got the (Troy) job, he texted me and said, ‘Man I see where Jon Sumrall is on your (Troy) staff.’ I said, ‘Yeah, what can you tell me about him?’

“He said, ‘People tend to remember that guy.’ He was exactly right. He’s one of those guys who tend to make an impression to say the least.

“There are some people that you go through life that make an impression and he seems to me to be one of those guys, whether it’s only for a minute, or recruiting visit or for an interview or for an entire collegiate career – the man makes an impression. There’s no question about that.”

McKnight isn’t surprised that many Troy supporters had Sumrall at the top of their wish list.

“I don’t want to overstate it, but his personal interactions with people around Troy, again, made an impression and were memorable. The core group of people who wanted him back, wanted him back because of the person that he is and the vision he wanted for the program.”

Enterprise resident Warren Bowron is among the fans glad Sumrall got the job and believes he could be there for quite a while.

“Jon seems to be a good guy; the right fit I think,” Bowron said. “We got spoiled by having coach (Larry) Blakeney for so many years and of course it was his first head coaching position when he came from Auburn.

“We’re in a situation where if you fall in love with Troy, you’re going to stay. I know we were very blessed to have coach Brown for the years we had him, but you could tell from the beginning he was at some point was going to be somewhere else.”

“I’m an old-school kind of fellow. Let’s get some 6-8, 300-pound linemen and let’s just run it down your throats and when you need to throw it, you’re going to throw it. I think defense wins championships.”

Bowron said he and his wife are already looking forward to next season.

“I’m tickled to death that coach Sumrall is coming on board and I think he’s ready to take that mantle of head coach and bring back Trojan Nation,” Bowron said. “Rhonda and I have got our seats ready for next year and we’re going to go to any and everything that we can.”

Brawl breaks out between Cowboys, 49ers fans outside AT&T Stadium

Brawl breaks out between Cowboys, 49ers fans outside AT&T Stadium

These rare photos show Tom Brady from his baseball days

These rare photos show Tom Brady from his baseball days

It didn’t take long for new Troy defensive coordinator Shiel Wood, who spent the past two years coaching at Army, to get a good vibe about the…

Jon Sumrall is shown during his first stint at Troy from 2015-2017 when he was assistant head coach to Neal Brown.

Jon Sumrall was named Troy’s new head coach on Thursday night after spending the past three seasons as an assistant at Kentucky.