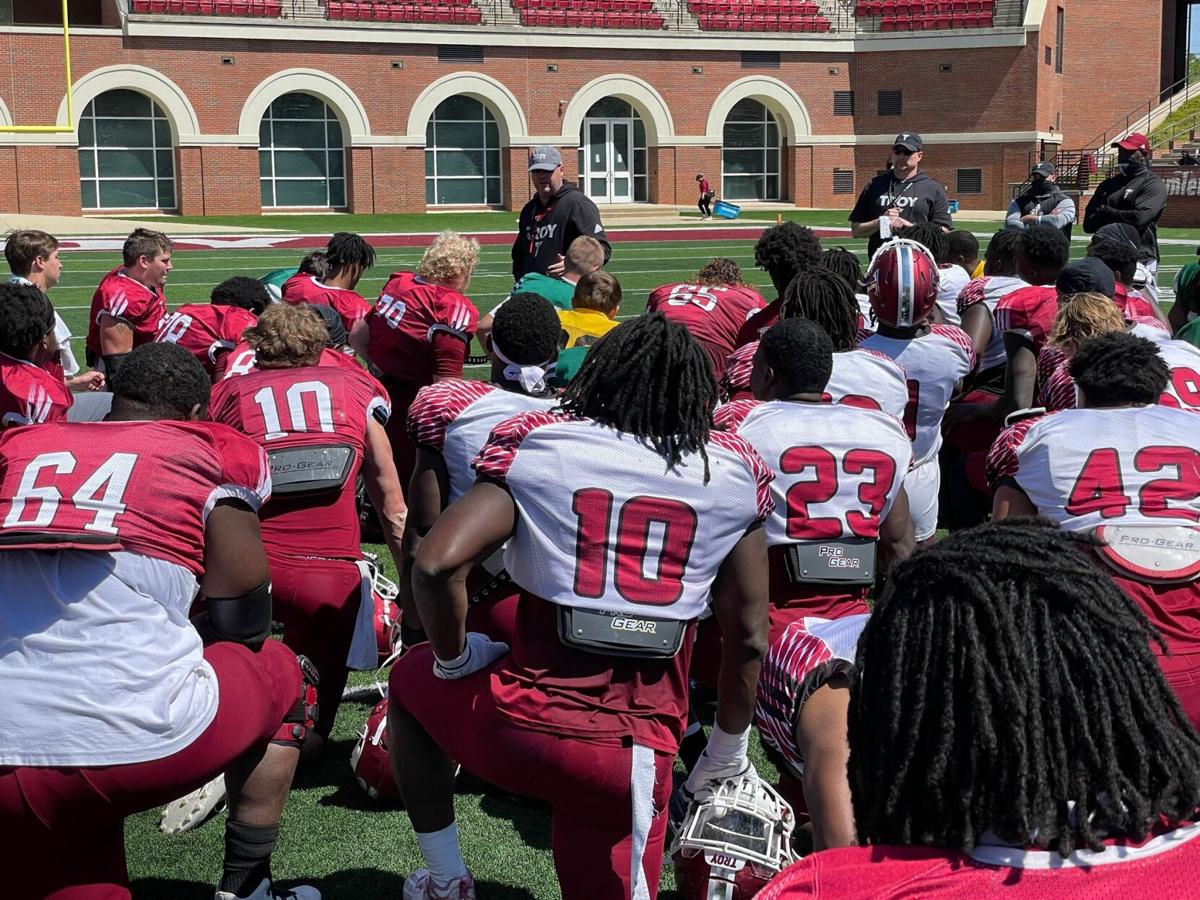 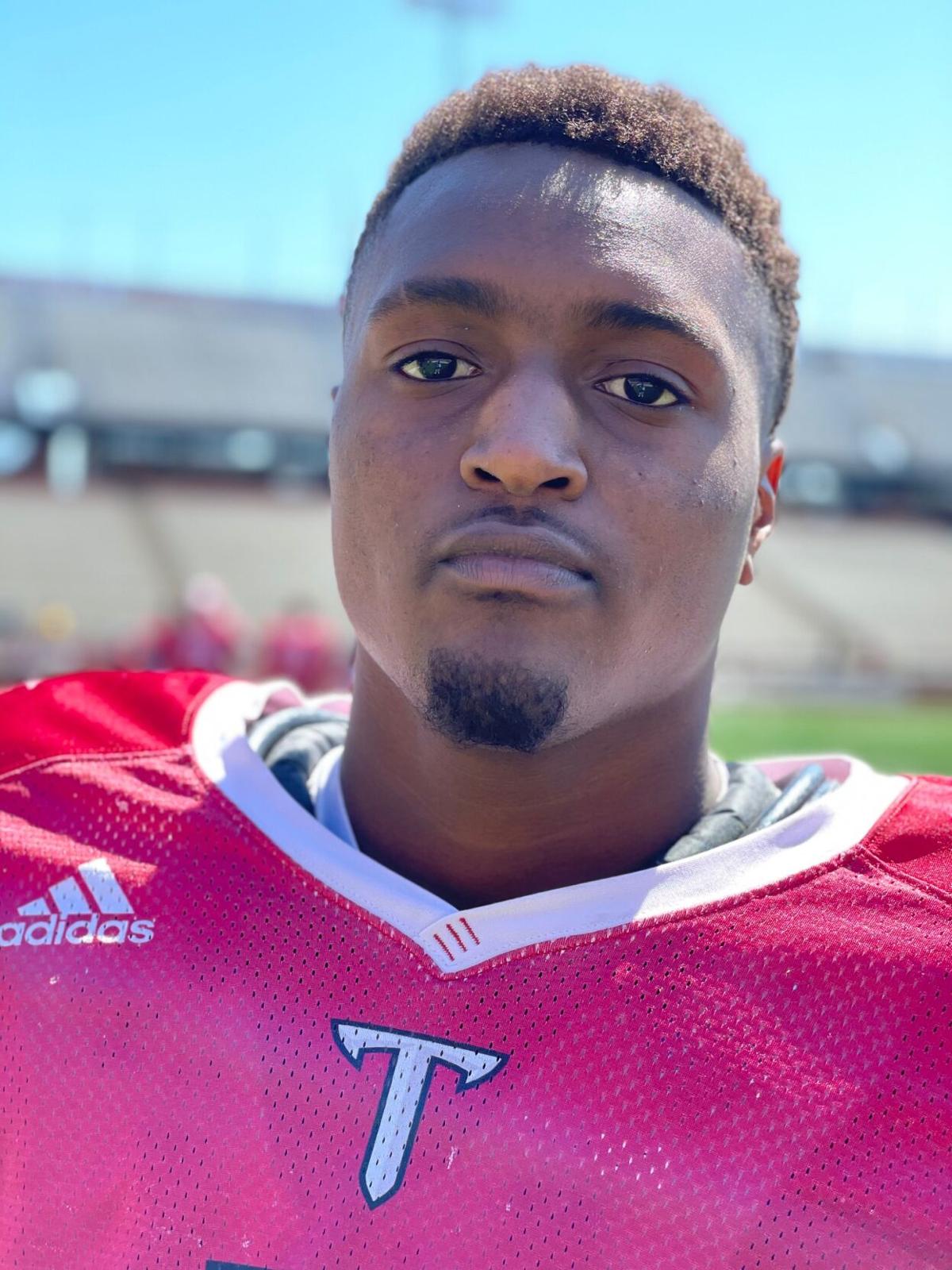 TROY – The defense won the day in Troy’s second scrimmage of the spring on Saturday, getting the better of an offense that dominated a week earlier.

“Overall I was really proud of how the defense came out with great energy today,” Troy head coach Chip Lindsey said. “I thought those guys really came out with the right mentality.

“There were a lot of guys playing with a sense of urgency. I felt like those guys came out with something to prove, which tells you what they’re made of.”

The Trojans have two practices remaining before the annual T-Day scrimmage is held at Veterans-Memorial Stadium next Saturday with a 1 p.m. kickoff.

“Today was a big situational scrimmage,” Lindsey said. “A little bit of two-minute, a little four-minute, red zone, backed up – good to put our guys in those situations. The scrimmage probably didn’t flow as much as last week because of that, but I thought we got a lot of good work done, and special teams.

“Offensively, we had some hit and miss, but not too bad either. I thought we handled our substitutions good on special teams, which was a big point of emphasis as well. No mistakes there. A lot of good film to grade.”

Former Dothan High standout Jabre Barber, a freshman wide receiver that redshirted last season, made the most of his opportunities on offense during the scrimmage.

In the fourth series, Barber made a nice catch and run on a pass from Jacob Free and on the last series of the day made a 20-yard touchdown catch on a ball thrown by Gunnar Watson.

“I didn’t play as much, but when I did, I just tried to take advantage of it,” Barber said. “I’ve just got to do what I’ve got to do to get on the field this year.”

Lindsey believes Barber is on the verge of getting in the mix with what’s an extremely talented group of veteran receivers.

As a senior at Dothan in 2019, Barber caught 38 passes for 619 yards with nine touchdowns. He also rushed for 118 yards and four touchdowns.

“He’s really improved and I think he’s got a really bright future here,” Lindsey said. “He’s playing behind some really good players right now in Kaylon Geiger and Tez (Johnson) and then we have Deshon Stoudemire (JUCO transfer from Iowa Western).

“His time is coming, because he’s got explosion and he’s got really good hands. He was a running back in high school I think for every year except for his last one, so he’s got running back skills at the wide receiver position. So I’m really pleased with his progress.”

Missouri transfer Taylor Powell took the majority of the reps at quarterback with the first team offense, while Free worked mainly with the second unit. Watson, last year’s primary starter, mixed in with both units.

Watson threw a 12-yard touchdown pass to Stoudemire on the fifth series of the scrimmage to put the offense into the end zone for the first time of the day and Free connected with Bryce Kelly on the seventh series.

Right before the halfway mark of the scrimmage, the defense came up big after Powell had moved the team down the field. Powell connected with Stoudemire down to the 1 on a second-and-goal play, but then threw incomplete on third down when a receiver appeared to break the wrong way. The QB had a pass swatted down on fourth down.

After a break, Free connected with Rondell Cole on a touchdown pass of around 35 yards. Cole was open down the middle and caught the ball inside the 10 before taking it in for the score.

Barber finished off the scrimmage with the final TD of the game.

As the race for the starting quarterback job continues between Watson, Free and Powell, Barber has plenty of confidence in all three and those blocking for them.

“All of them can play and do the job,” Barber said. “We’ve just got to make them look good. Dylan Bradshaw (senior center) – they’re all vets and they know what to do for us to win this year.”

It was an up and down day for the receivers, who made some nice catches but also dropped some well thrown passes.

“I tell our team this all the time, what you put on film is all we can go by,” Lindsey said. “It’s who you are. If you get an opportunity to make a play, make one.

“We had a bunch of young guys (receivers) with that second group. We tried to really play with the ones the guys that are rotating in throughout a real game and let our other guys get more reps. I think we had close to 90 plays total, which is good.”

Kyle Coale connected on a field goal of around 40 yards early in the scrimmage and Jack Martin, the former Northview standout, had several nice punts. Martin was also true on each of his extra point attempts and had a long kickoff out of the end zone.

Martin is expected to handle the punting and kickoff duties and is in the mix for the starting placekicker role with Coale. Freshman Scott Taylor Renfroe, a signee from Pike Liberal Arts, could also join the placekicker battle when he arrives on campus this summer.

Lindsey was asked what he hopes to accomplish next week before the T-Day game.

“I think really just kind of correct mistakes from today and polish up what we’ve been doing from base offense and base defense and then finish with a good T-Day next Saturday,” he said.

TROY – Troy men’s golf head coach Bart Barnes has resigned his position to pursue other opportunities, Barnes and Troy Director of Athletics B…

Troy blanks No. 20 Florida State to even series

TALLAHASSEE, Fla. – Troy secured its first-ever road win against Florida State by shutting out the No. 20 Seminoles on a hot afternoon inside …

KNOXVILLE, Tenn. — The Tennessee Lady Vols have signed Alexus Dye, the Sun Belt Conference player of the Year, as a graduate transfer.