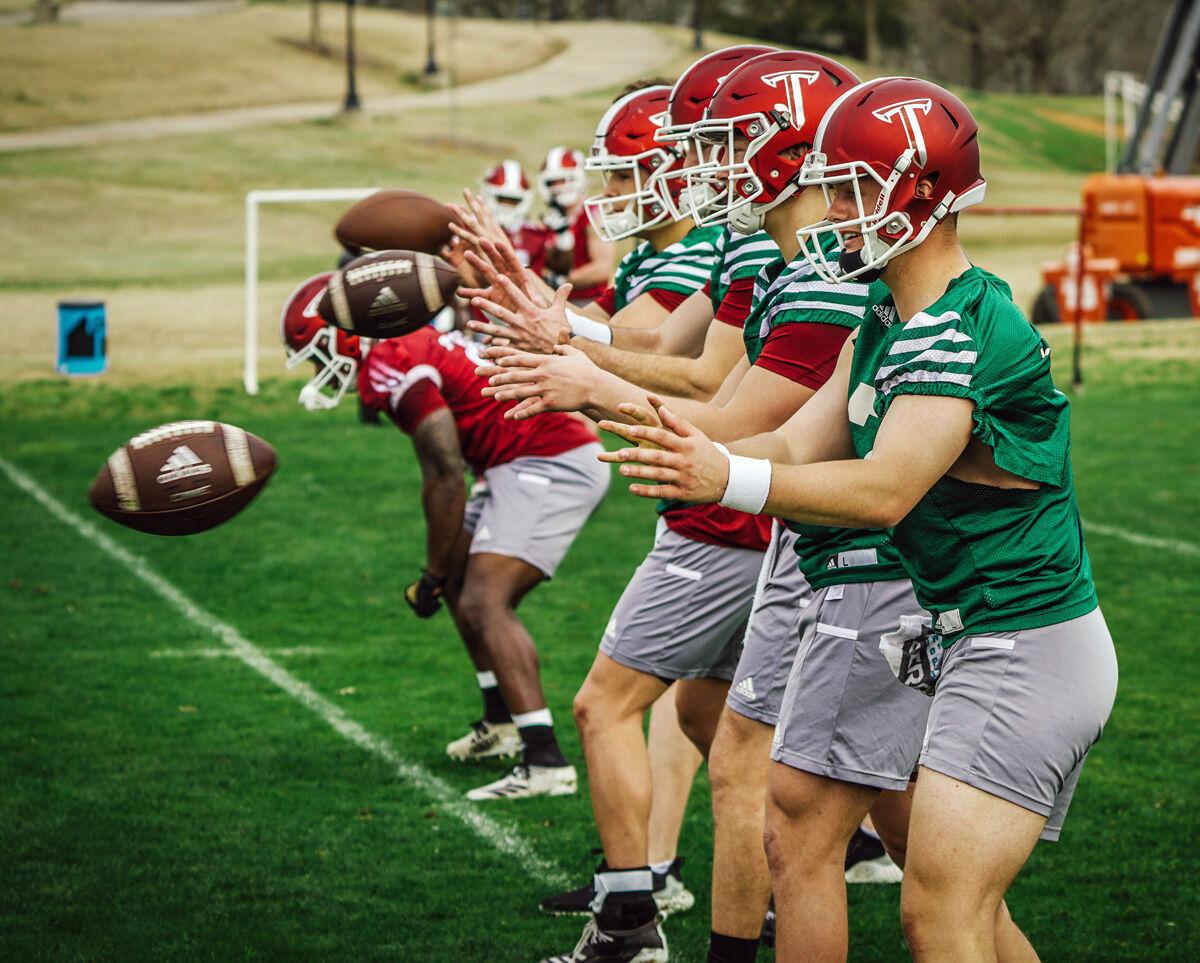 Troy quarterbacks work during the first day of spring practice on Monday. 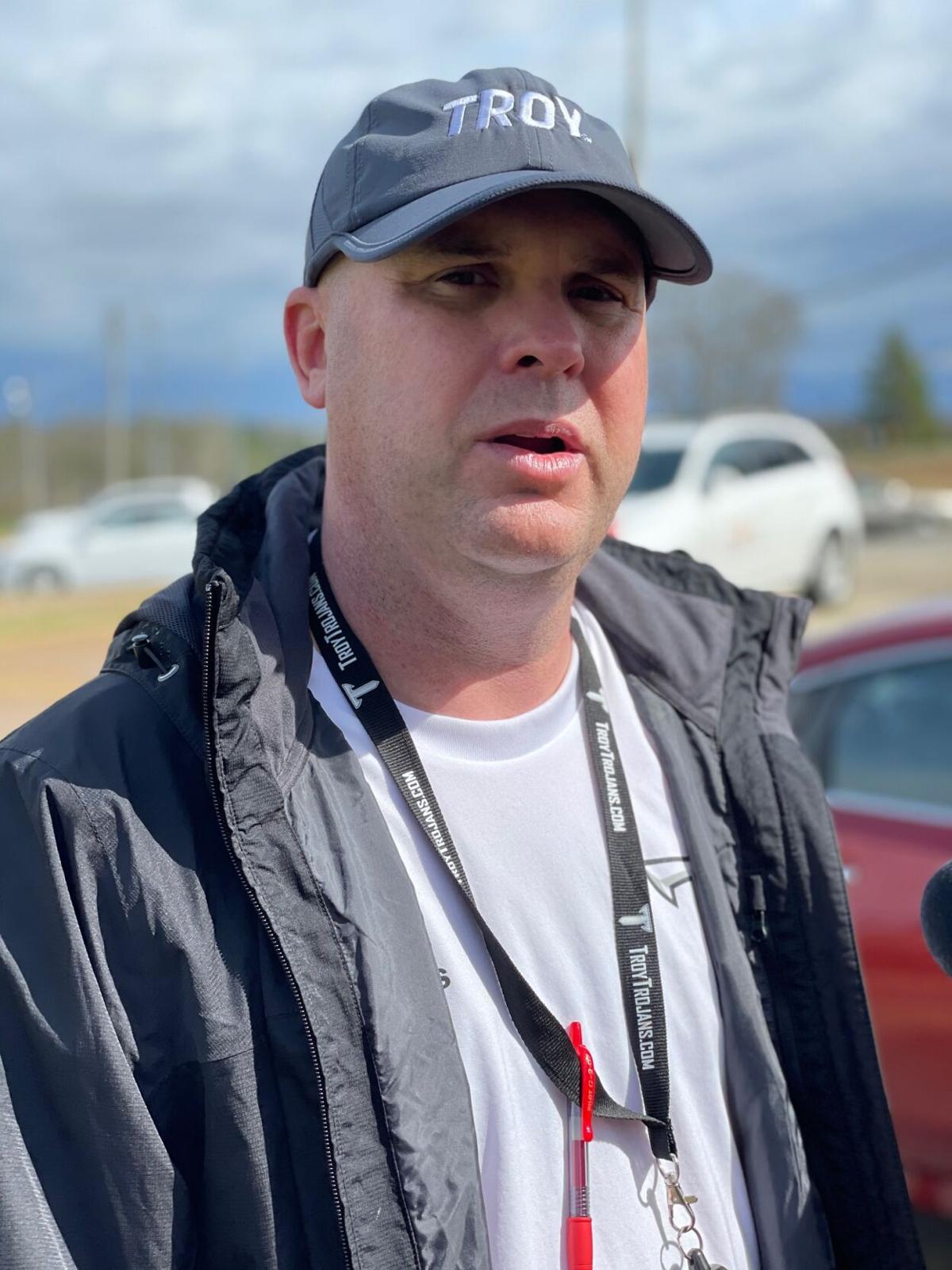 TROY – The Troy football team opened spring practice Monday morning and received its upcoming fall game schedule as well when the Sun Belt Conference released it later in the afternoon.

After opening the season with two straight home games – vs. Southern on Sept. 4 and vs. Liberty on Sept. 11 – the Trojans will play five of the next six games on the road, which includes an Oct. 2 date at South Carolina.

Trips to Southern Miss (Sept. 18), ULM (Sept. 25) and South Carolina are followed by a home game with Georgia Southern (Oct. 9) before it’s back on the road against Texas State (Oct. 16) and Coastal Carolina (Oct. 28).

Three of the final four regular-season games will be in the friendly confines of Veterans-Memorial Stadium as Sun Belt foes South Alabama (Nov. 6), Louisiana-Lafayette (No. 13) and Appalachian State (Nov. 20) pay a visit before the regular season wraps up for the Trojans at Georgia State on Nov. 27.

The Trojans had two hours of practice on Monday with the final 45 minutes or so taking place under light rain showers.

“The field was a little slick, but I really thought our guys did a good job of pushing through and focusing on trying to improve,” head coach Chip Lindsey said. “It was an install day for offense and defense and I think it’s really important in the spring that we spend a lot of time establishing our base offense, defense and special teams.

“I think we have eight or nine new guys out there that we added in January, so it was good to see those guys move around. I like where we are out from the competition standpoint. I think we have more depth than we’ve probably had since I’ve been here and obviously that’s important in developing your team.

“It creates competition at all positions. I’m looking forward to seeing how that plays out throughout the spring.”

Much of the focus will be on the quarterback battle between last year’s primary starter, Gunnar Watson, back-ups from last season, Jacob Free and Kyle Toole, and recent Missouri transfer Taylor Powell

“I think all four of these guys are talented enough,” Lindsey said. “All four have really focused in January and February in trying to spend some time in the film room, studying the playbook and just trying to improve on where we were last year.

“We have to play better at that position and we understand that as a football team. Competition makes everybody better and I think you’re going to see that not only at our quarterback position, but at a lot of other positions as well.”

Watson and Free, who happen to be roommates, welcome the competition for the starting job.

“It makes you come every day prepared,” Watson said. “It’s tough sometimes, but we all get along and push each other, so it’s a good thing.”

Free, a Brantley native, got several starts Last season when Watson was out with an injury.

“We’re all getting the same amount of reps right now and I think we’re making each other better,” Free said. “I’m definitely looking forward to it the rest of the spring and in the fall.”

Lindsey says he will be looking for more consistency from the quarterback position.

“The whole key to whoever wins this job will be taking care of the football and really executing at a higher level,” Lindsey said. “At times we did that last year, just not consistently enough, so we’re looking for consistent guys that will take care of the ball and execute. That’s what we’re looking for in the spring and we’ll see how it plays out.”

Working hard: Defensive tackle Will Choloh said the Trojans have been working hard in the weight room under the direction of strength and conditioning coach Rusty Whitt and he’s certainly seen the benefits.

“I’ve gained about 10 pounds this offseason and I feel like I’m stronger than ever,” Choloh said. “I’m just ready to go for this upcoming season.”

While Choloh has added weight, Watson has trimmed down.

Lindsey has noticed the strength improvement on the team overall.

“I think our guys look a little more developed – I know we’re stronger,” Lindsey said. “That goes along with helping prevent injuries and really performing better. I think we’ve worked extremely hard for the six weeks leading up to spring ball and for a lot of them it’s paid off.”

Number switch? Running back Kimani Vidal, who wore No. 23 during his true freshman season, has switched to 0.

“One evening after workouts I had went in the equipment room and he was saying that they had zero available, so I just took it,” Vidal said. “I just wanted to change it up a little bit. I’ve never been a single digit person since like Little League and I just wanted to do it this season.”

So who gets No. 23? Keyshawn Swanson, a redshirt freshman safety from Pensacola, Fla., who spent a year at Akron, now has that number.

Healing time: Receiver Tray Eafford and running back D.K. Billingsley are being held out of spring drills while recovering from off-season surgeries to what Lindsey termed “clean up deals” on their shoulders.

Next up: The Trojans are scheduled to practice again Wednesday and Friday mornings before taking a week off as the school has spring break.

Countries that have never won an Olympic medal

Will the Saints make the playoffs?

Will the Saints make the playoffs?

Troy Trojans have sense of urgency

Going into his third year as the Troy head football coach, Chip Lindsey understands there is a sense of urgency to show marked improvement.

Jacob Free’s career as a Troy Trojan quarterback is over.

TROY – It didn’t take long for new Troy baseball coach Skylar Meade to understand what comes with the job.

The Mark Smartt era as Troy head baseball coach has come to an end.

TROY – Already named the No. 3 returning linebacker in the country by Pro Football Focus, the industry leader announced Wednesday that Troy ju…

Troy quarterbacks work during the first day of spring practice on Monday.