Free and open election coverage when you register today!
From now through Nov. 7, we're providing FREE access to election coverage, made possible by our subscribers. You can help support our work by becoming a subscriber today.
Log in Sign up {{featured_button_text}}
You have permission to edit this article.
Edit 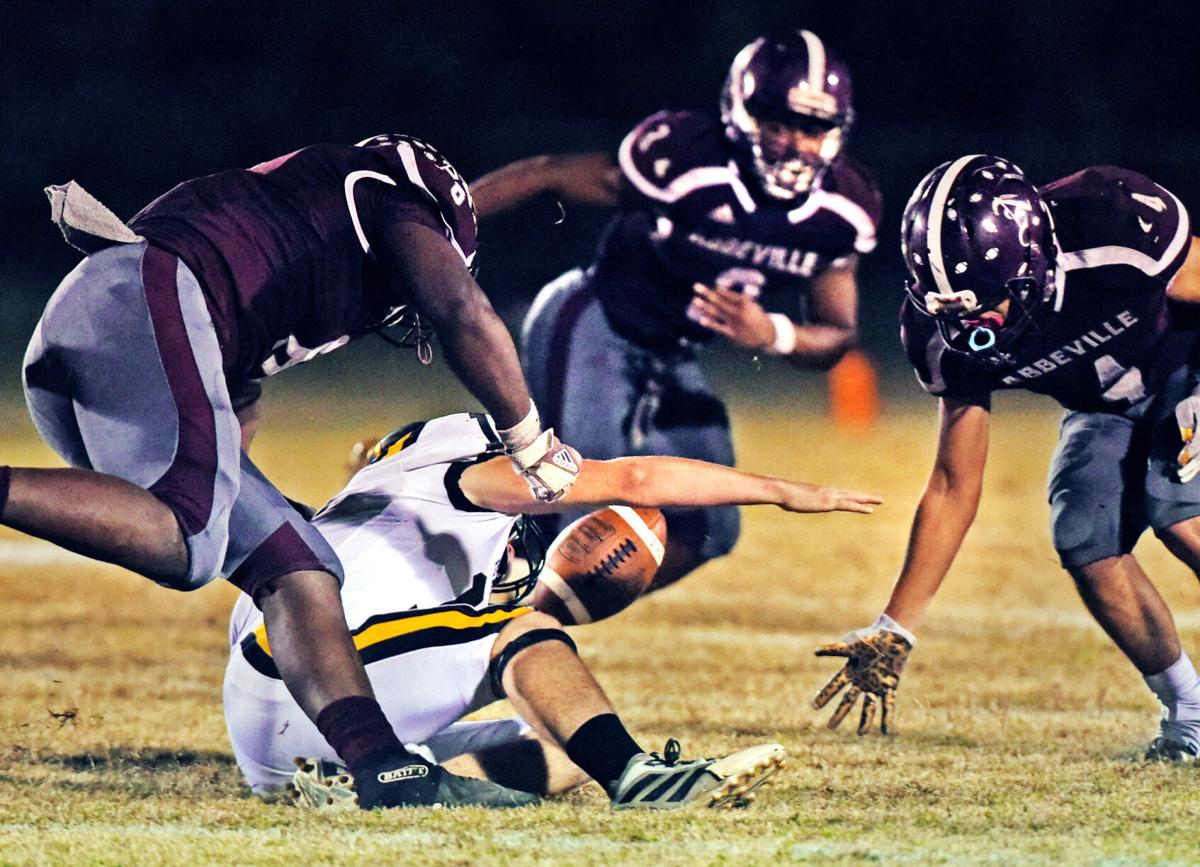 The Abbeville defense forces a fumble during the Class 2A quarterfinal playoff game againt Isabella on Friday night in Abbeville. 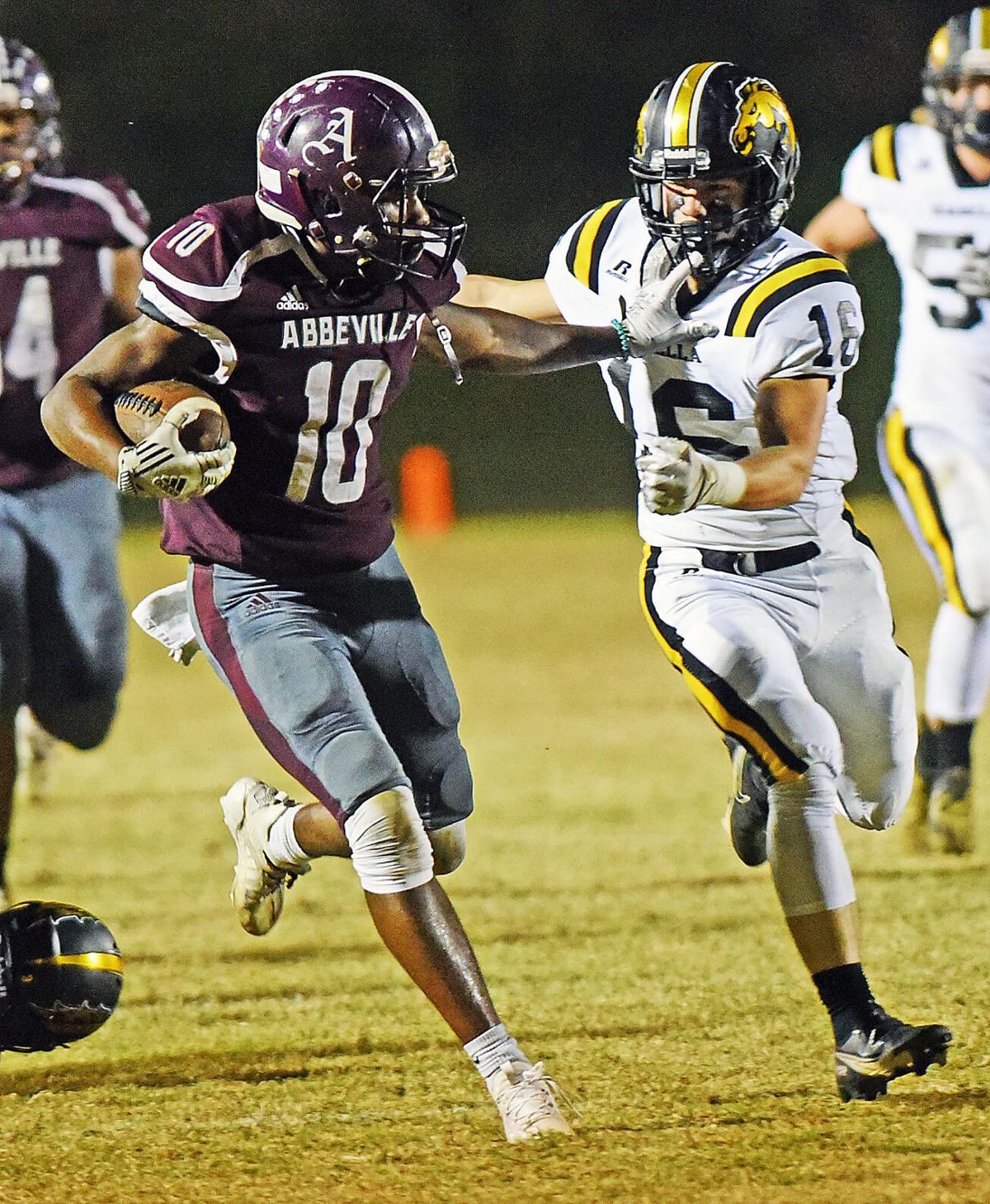 Abbeville's Randy Glanton stiff arms an Isabella defender on his way for a touchdown during the second quarter of the Class 2A quarterfinal playoff game on Friday night in Abbeville.

JEREMY WISE For the Eagle

ABBEVILLE — With the Abbeville Yellow Jackets desperately needing some breathing room Friday night against Isabella, the old-school combination of defense and ground game delivered it.

Randy Glanton intercepted a Mustangs pass early in the fourth quarter, setting up a Wauntavious Conley rushing touchdown that sealed a 38-20 victory.

The Yellow Jackets reached the fourth round of the playoffs with the victory for the first time ever but will hit the road for the Class 2A semifinal game.

Next Friday, Abbeville will travel to Leroy, a 28-21 winner over Lanett, for a chance to advance to the title game.

Prior to Glanton’s interception, Abbeville led 26-20 but had struggled to put the Mustangs away. The Yellow Jackets had struggled to string together drives, using big plays primarily from Glanton and his cousin Martavious Glanton to generate points.

But Glanton’s interception turned the tide with 10:30 left in the contest. Abbeville, which had 65 yards rushing to that point, compiled 76 yards on the ground on the ensuing possession.

Conley capped the drive with a 24-yard scoring scamper, giving Abbeville a 32-20 lead with 8:28 left to go.

The defense then stepped up again. After the Mustangs reached inside the 5 on a run from quarterback Jake Logan, Abbeville’s defense made a goal-line stand on a couple of runs.

The Yellow Jackets then deflected a Logan pass on fourth down to kill the drive.

Martavious Glanton added an insurance score on a 59-yard scoring run with 58 seconds left, and Jayven Anderson added a final interception to seal the deal.

Isabella’s game plan — keeping the ball away from the explosive Abbeville offense — was on display early on. The Mustangs took the opening kickoff and burned 7:04 off the clock before scoring on a 1-yard run from Logan.

Isabella then attempted an onside kick, but Abbeville recovered. In contrast to the Mustangs, the Yellow Jackets needed just three plays to score on the first Glanton-to-Glanton connection, a 60-yard touchdown pass from Martavious to Randy.

Abbeville’s try for two failed, and the Yellow Jackets trailed 7-6 after one quarter.

The next Glanton-to-Glanton connection wasn’t pretty, but it was just as effective.

On a third and long play, quarterback Martavious tried a run to the outside. Isabella’s defense, stout against the run most of the night, clamped on him immediately.

Martavious forced an awkward pitch that actually hit the ground, but Randy picked it up and raced 44 yards for a touchdown. The Yellow Jackets converted the two-point try and led 14-7 with 8:36 left in the half.

Isabella, focused on the running game most of the half, answered through the air. The Mustangs suckered the Yellow Jackets’ defense in, leaving Austin Jones wide open for a 42-yard TD pass from Logan.

The Glanton-to-Glanton connection wasn’t done yet. After Martavious Glanton found Anderson for a 35-yard pass, he dialed up a short pass to Randy Glanton.

Glanton then found a seam and found paydirt from 16 yards out. Abbeville led 20-14 at halftime. The drive was set up by a recovered onside kick at midfield,

The Yellow Jacket offense struggled for most of the third quarter, allowing the Mustangs to tie it on a 1-yard run. Ky’Juan Kinsey blocked the extra point, though, keeping the score at 20 apiece.

Abbeville finally found offensive rhythm after Martavious Glanton tossed an 18-yard pass on fourth down to Anderson. That set up an 11-yard touchdown run from Rico Dozier with 30 seconds left in the third quarter.

The Yellow Jackets then sealed the win with a strong fourth quarter.

Martavious Glanton led the ground attack with 119 yards and a touchdown on 10 carries. Dozier added 62 yards and another score on 14 carries.

Isabella managed just 100 yards on the ground on 52 carries, led by Jason Wilson’s 57 yards on 19 rushes.

Logan was 8 of 14 passing for 138 yards, a touchdown and two interceptions.

The Abbeville defense forces a fumble during the Class 2A quarterfinal playoff game againt Isabella on Friday night in Abbeville.

Abbeville's Randy Glanton stiff arms an Isabella defender on his way for a touchdown during the second quarter of the Class 2A quarterfinal playoff game on Friday night in Abbeville.