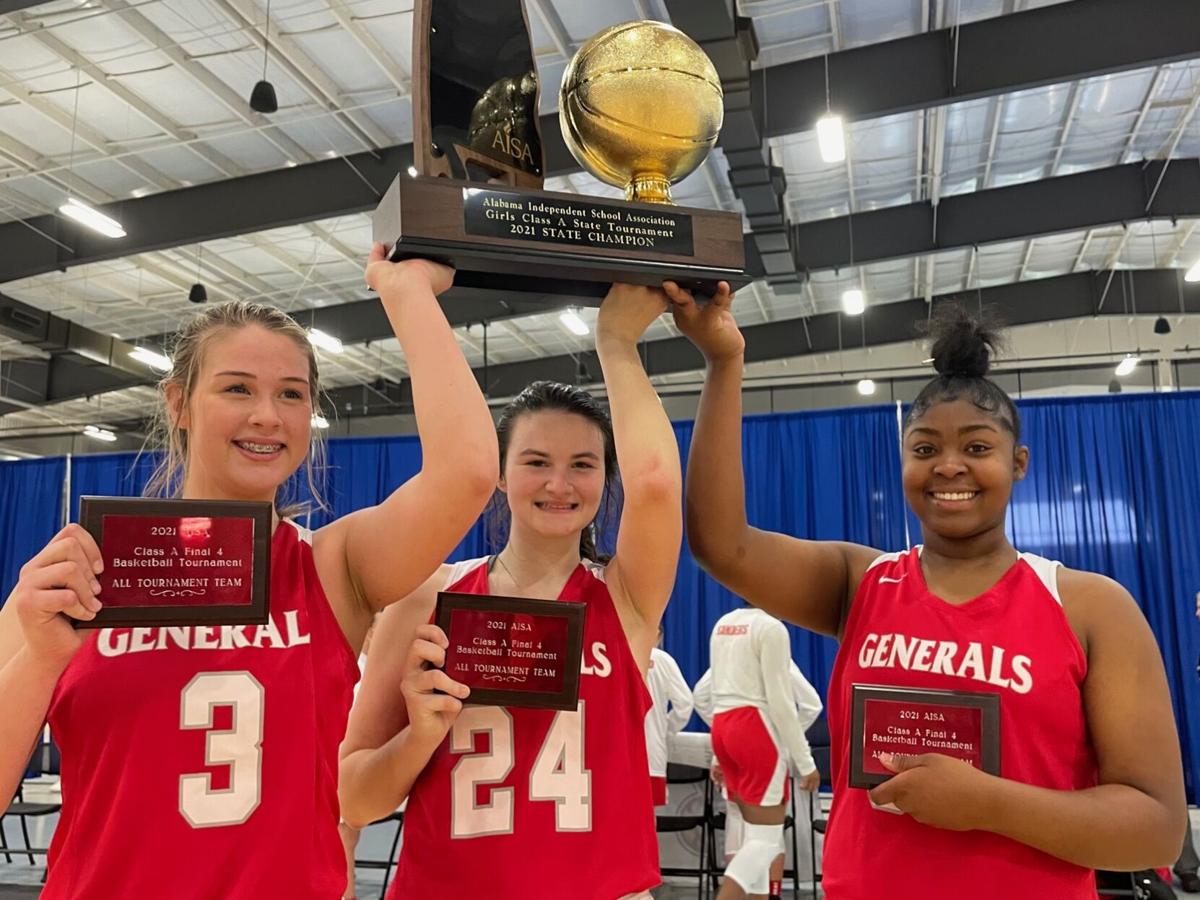 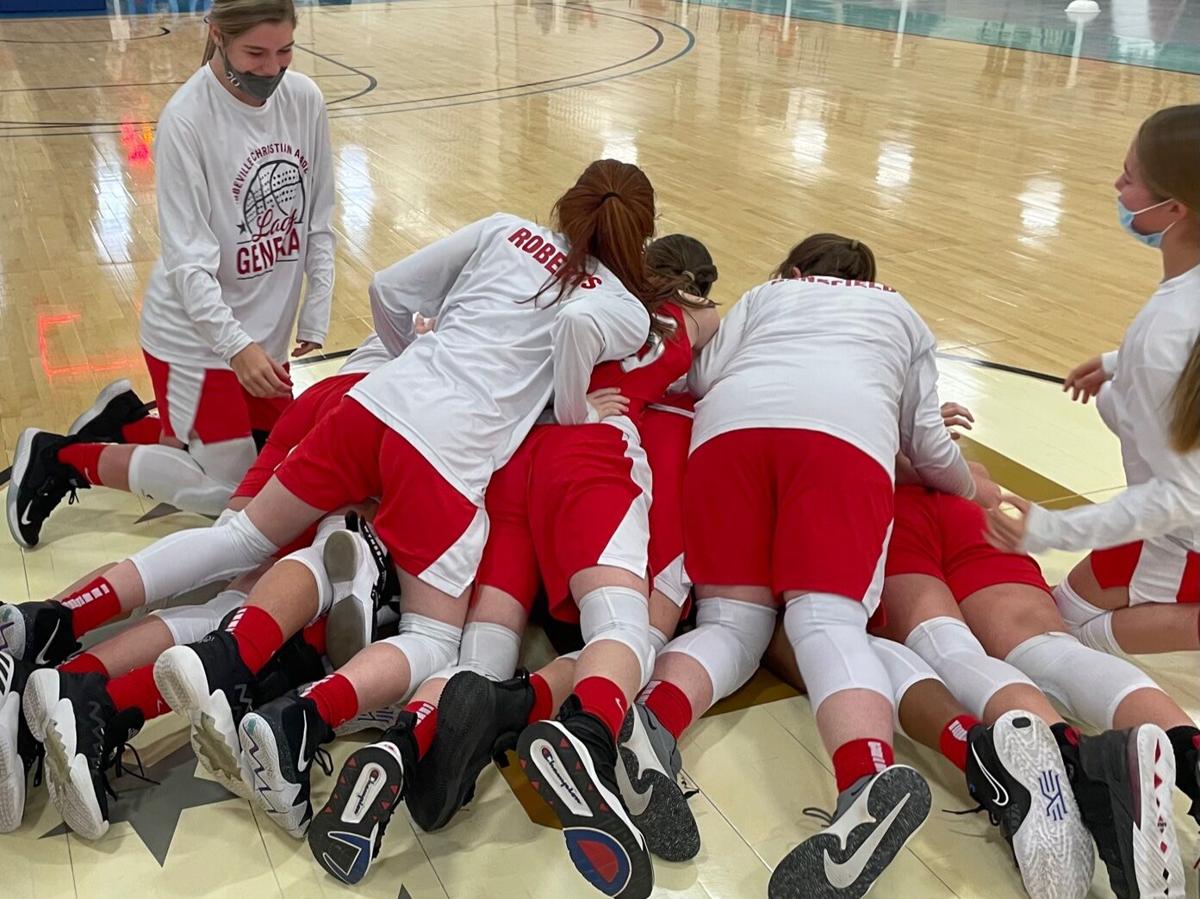 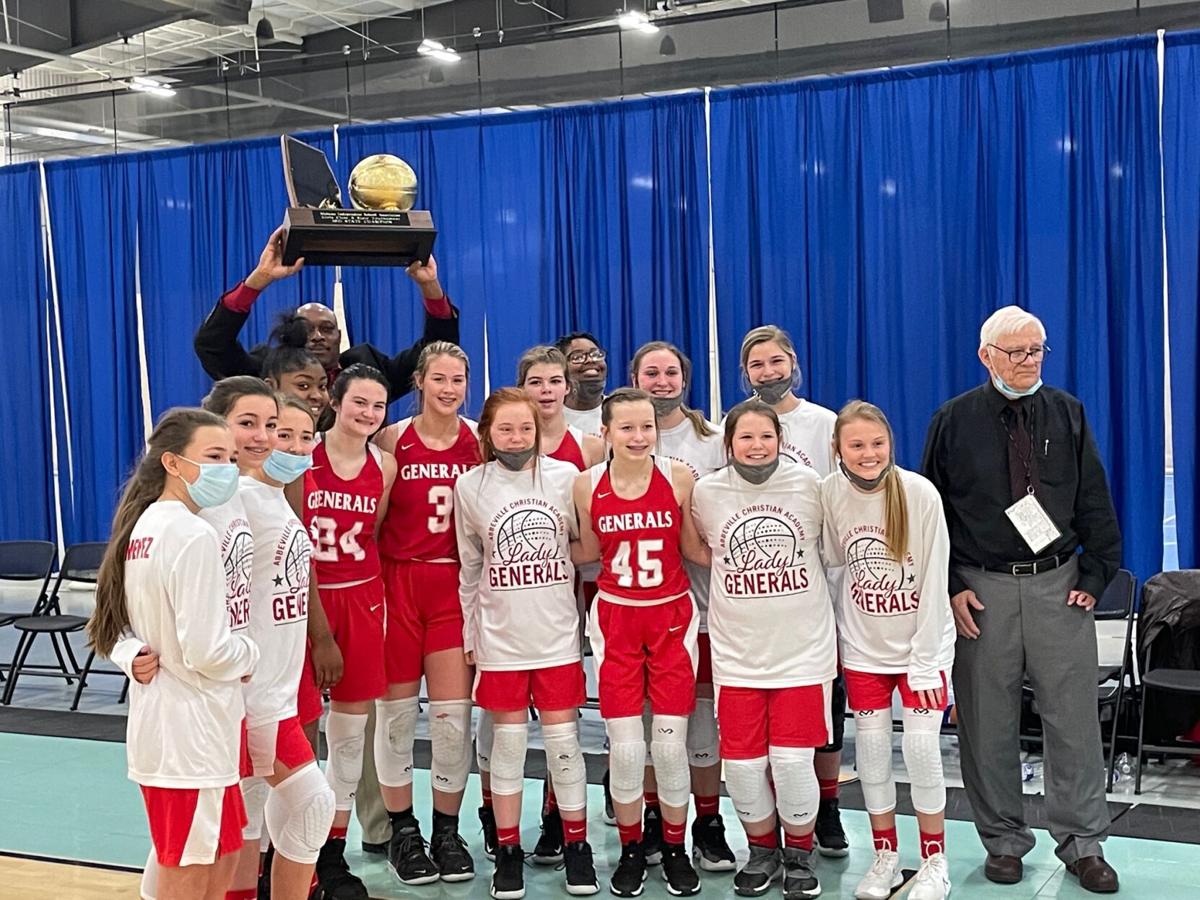 Abbeville Christian Academy celebrates with the AISA Class A championship trophy on Thursday in Montgomery.

MONTGOMERY – Some things get better with time.

Abbeville Christian Academy defeated Pickens Academy 49-48 Thursday at the Cramton Bowl Multiplex to claim the AISA Class A championship, the first for the girls basketball program since the school opened in 1970.

Ricky Ward has now coached a team to 10 state AISA titles – the previous nine coming as the head coach at Lakeside School.

And this Lady Generals team got better with time as well, winning five of its final six games in compiling a 10-8 record while playing a schedule that was disrupted numerous times due to COVID-19 protocols.

Ward, in his sixth year as head coach of the Generals, saw his program finish state runner-up in 2017 and 2019 and eliminated in the semifinals a year ago before finishing on top Thursday.

“Everybody says it must get old, but it never gets old,” Ward said of winning a title. “They just all feel the same, you know what I mean? You don’t never forget. It's a lot of hard work. It's hard to win.

“We lost eight seniors off of last year’s team,” Ward continued. “We had to retool. Until we started the playoffs, we had played only two 1A games. Evangel beat us at our place by four and we beat them at their place in double overtime by one. The rest of them were 2As and 3As.

“Every time we lost, we started getting better. If you get to a certain level, you learn more from your losses than your wins. People that are winning, they keep going along like they’re doing. People who keep losing are saying, ‘Why am I losing?’

“They have really improved. Early in the season we were having a hard time scoring 30 points.”

Sophomore guard Caroline Armstrong, who scored 16 in the game, said teamwork was the key.

“At the beginning of the season we were taking some bad shots – shooting too fast,” Armstrong said. “Once we started passing the ball, we really started winning games. To finally get our goal in the end feels amazing.”

Junior forward Amiyah Govan was the key for the Generals down the stretch. She scored 21 points in the game with 14 coming in the second half.

“We told her the other night, ‘Amiyah, you will be the factor for who wins this game,’” Ward said. “And she was. She rose to the occasion.”

Govan had some words of encouragement for her teammates during a timeout in the fourth quarter.

“I just pulled my team to the side and said, ‘We’ve got this’ and tried to build them up and we pulled through,’” said Govan, who was also part of ACA’s volleyball state championship team this fall.

Pickens Academy, which trailed 21-14 at the half, got hot near the end of the third quarter to pull within 34-29 going into the final eight minutes.

The Pirates scored the first basket of the fourth quarter in making it a 34-31 game, but Govan would score the next six ACA points to keep the Generals in the lead at 40-37 with four minutes left.

Britney Fitch hit a free throw for the Pirates to make it a two-point game, but ACA’s Lyla Carlisle calmly sank both ends of a 1-and-1 free throw opportunity with 3:13 left to push the lead to 42-38.

Armstrong then came up with a steal on the ensuing inbounds and scored on a layup to make it 44-38 with just under three minutes remaining. Govan scored the next four points of the game to give the Generals a 10-point lead and it looked as if the game was well in hand.

But Pickens Academy tallied seven quick points – the final basket of the stretch coming on a 3-pointer by Lily Lowery – and all of the sudden the Pirates were within 48-45 with still 58 seconds left.

On the next possession, the Generals calmly worked the ball around with nice passes in running the clock down before Anna Grace Blalock was intentionally fouled with 20 ticks left. Blalock hit one of her two free throw tries.

The Pirates would pull within 49-46 after Kate Wilkins was fouled and hit one of two free throws with 17 seconds left. Blalock was quickly fouled on the inbounds and sent to the free throw line with 15 seconds left and missed both tries.

Pickens Academy, however, didn’t elect to put up a 3-point try in an attempt to tie the score – instead getting an uncontested shot in the lane from Lizzie Noland as the clock wound down to end the game as ACA held on for the one-point win.

Abbeville Christian Academy celebrates with the AISA Class A championship trophy on Thursday in Montgomery.