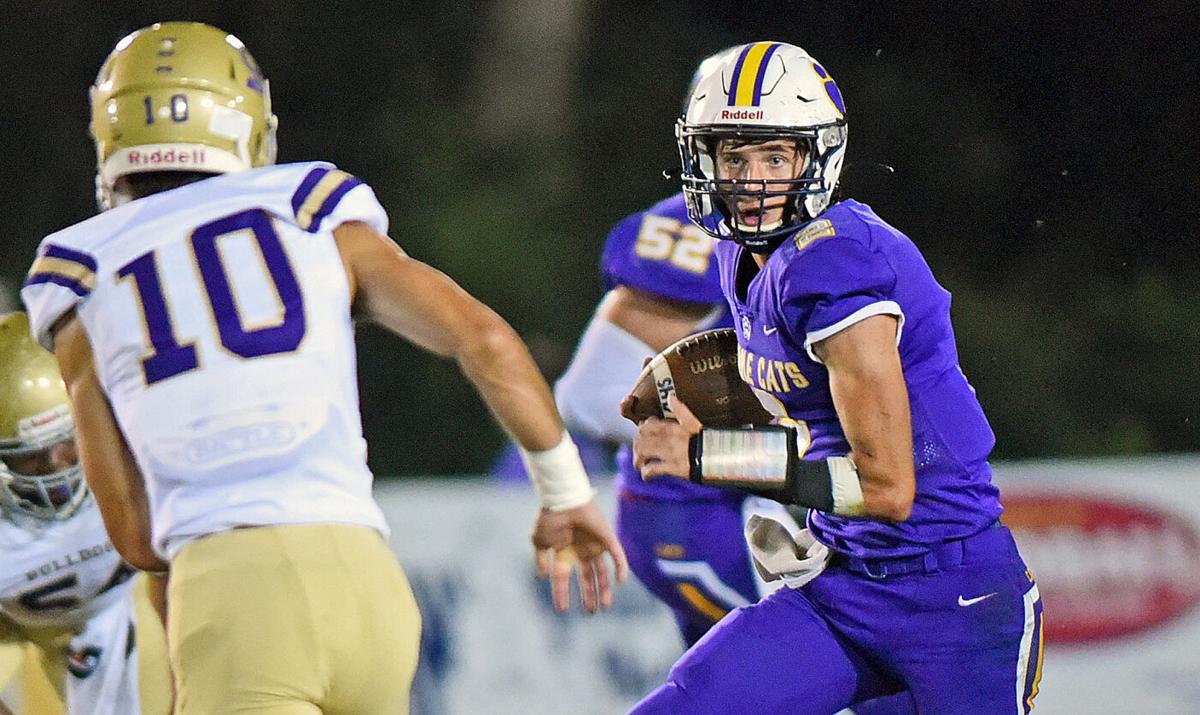 Ariton quarterback Ian Senn scrambles away from the Geneva County defense during Friday’s game in Ariton. The host Purple Cats routed the Bulldogs 42-0. 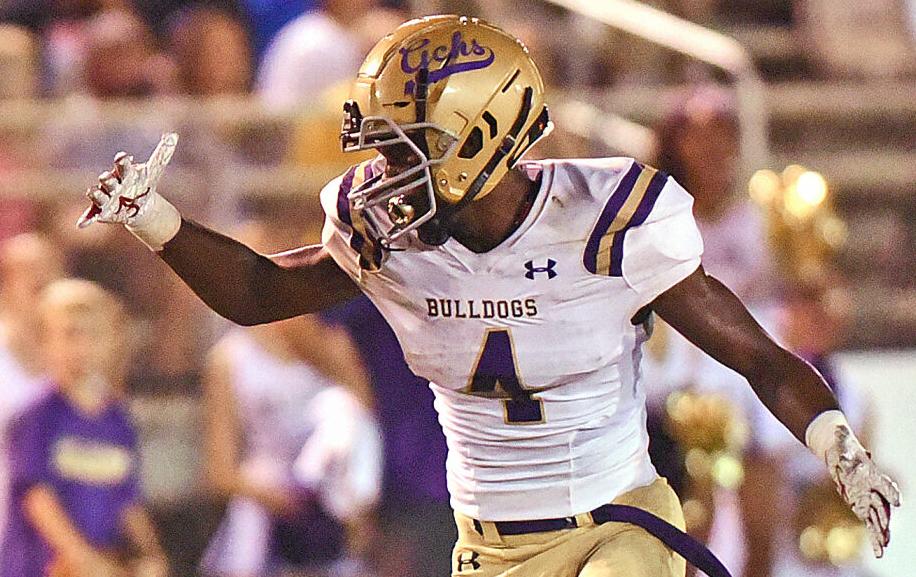 Geneva County running back Emmanuel Henderson misses a pass down the middle of the field during a game against Ariton on Friday night in Ariton.

ARITON – Ariton’s defense set the tone on the game’s opening series, stuffing Geneva County star running back and Alabama commitment Emmanuel Henderson for a 5-yard loss on a 4th-and-1 play at the Purple Cat 29.

It was all Purple Reign the rest of the night in the Class 2A, Region 2 match-up.

The Purple Cats scored on their first six possessions and held Henderson to just 20 total yards on 10 carries in a dominating 42-0 rout of a less than full strength Geneva County team Friday night at Robert F. Zumstein Memorial Stadium.

The Purple Cats improved to 4-0 overall and 2-0 in region play. The 2A third-ranked Bulldogs, who had six starters out on both offense and defense because of COVID-19 re-acclimation protocols, fell to 2-1 and 1-1.

Ariton amassed 514 yards on offense and allowed only 73 yards and four first downs to Geneva County in the game, which was played with a running clock for most of the second half after the Purple Cats built a 40-0 advantage.

“I thought we played well a complete game all the way across,” Ariton head coach Steven Kilcrease said. “I was proud of our guys. We had a few out (missing) ourselves as you run into that on a weekly basis. I thought offensively we controlled the line of scrimmage and defensively, we swarmed to the ball.”

On the other side, it was a tough night for Geneva County, which was missing key starters on both sides, especially on the line and in blocking backs.

“We didn’t come with a loaded gun and we played a great football team,” Geneva County head coach JimBob Striplin. “Hat’s off to them. They are a classy group with a lot of great athletes and a great coaching staff. They will do great things this year.

“We have to pick our tails off the ground and turn around quickly because it doesn’t get any easier as this region doesn’t allow you to rest. It is high school football and you have to roll with the punches.”

Both teams have showdowns next week. Ariton welcomes in unbeaten rival G.W. Long, while Geneva County, which expects to get most of its starters back, travels to No. 5 ranked Abbeville.

While Ariton’s offense had a big night, its defense was a major story, shutting down Henderson, who hurt the Purple Cats the last two years, including 367 yards rushing last year.

Other than getting loose for a 20-yard run on a speed sweep, Henderson found no breathing room against an aggressive, fast-pursuing Purple Cat defense. Four of his 10 carries went for losses in the backfield and another for no gain. The 20 rushing yards were the fewest for Henderson since his freshman season. He did not play in the second half after Ariton built the big lead.

“Obviously, not let him get outside, but we also worked as much with the back side guys because I was so scared of the cutback,” Kilcrease said. “That is where he has killed us the last few years. I thought we did a good job of stopping him on the front side for all but one run, but we also had guys coming from the back side. He is a player. He is really good.”

The Ariton offense was also at full gear, scoring at will in building a 32-0 halftime lead and extending it to 40-0 on the first series of the third quarter.

Running back Jordan Smith and quarterback Ian Senn ignited the attack. Smith, who didn’t play after the first series of the third quarter, rushed for 149 yards on 16 carries with two touchdowns, while Senn threw for 208 yards and three scores on 9-of-10 passing and added 86 yards on seven carries with one score.

“I thought Jordan ran the ball really hard and really well,” Kilcrease said. “He is such a hard worker. When we were in quarantine (last summer), he sent me videos every other day of him doing cone work.”

He was equally pleased at Senn’s performance.

“I told the coaches during the week to turn him loose,” Kilcrease said. “I thought we needed that. We had not run him hardly any at all.”

The defense, though, set the tone early.

On the game’s second play, Geneva County hit the Purple Cats with a 41-yard pass from quarterback Jackson Stewart to David Payne, pushing the ball to the Ariton 38.

Henderson gained 2 and 7 yards on the next two plays, but the Purple Cats stopped him for no gain on third down, forcing 4th-and-1. Henderson got the call on a sweep to the left, but Ariton’s Dwayne Riley and CJ McNabb shot through to stop him five yards in the backfield.

The Ariton offense then went to work with an 11-play, 66-yard drive, overcoming a holding infraction with a 23-yard Senn to Landon Tyler completion. Smith capped the series with a 1-yard plunge off the left side. Andyn Garris converted the point after kick to make it 7-0 with 4:16 left in the quarter.

After Ariton’s defense forced a three-and-out, the Purple Cats hit several big plays in a five-play, 63-yard scoring drive. On 3rd-and-2, Senn faked a handoff to the middle, made a defender miss right off the edge and raced down the left side on a 32-yard scoring run. Garris’ kick made it 14-0 with eight seconds to go in the quarter.

Geneva County gained one first down on the ensuing series with Henderson throwing a 36-yard pass to Grayson Bell to move the Dawgs to the Ariton 28, but the drive ended with a fourth-down interception by the Purple Cats’ Lawson Leger at the 5-yard line.

Three plays later, Senn dropped back and unleashed a long pass to the left where Ariton receiver Matthew Harrell caught it between two defenders. Both defenders went past Harrell and he raced away for an 81-yard throw and catch TD pass. The extra point failed, leaving it 20-0 with 8:09 left in the third.

Smith padded the margin to 32-0 by halftime with a 9-yard scoring run and a 13-yard reception off the right side from Senn late in the second quarter.

The Purple Cats put it away early on the first series of the third quarter on a 14-yard scoring pass from Senn to Tyler, who gained inside position on a defender to make the TD catch.

Ariton’s final score came late in the third quarter. With Geneva County backed up in punt formation, a snap went to the left of the back-up punter, who had the ball go off his hands into the end zone where he had to fall on it for a safety that made it 42-0.

Ariton, behind a 54-yard run by Brayden Marotz, moved to the Bulldog 18 with four minutes to go, but Kilcrease, with the running clock in play, elected to knee the ball four times to turn the ball over on downs in the final minute.

Ariton quarterback Ian Senn scrambles away from the Geneva County defense during Friday’s game in Ariton. The host Purple Cats routed the Bulldogs 42-0.

Geneva County running back Emmanuel Henderson misses a pass down the middle of the field during a game against Ariton on Friday night in Ariton.