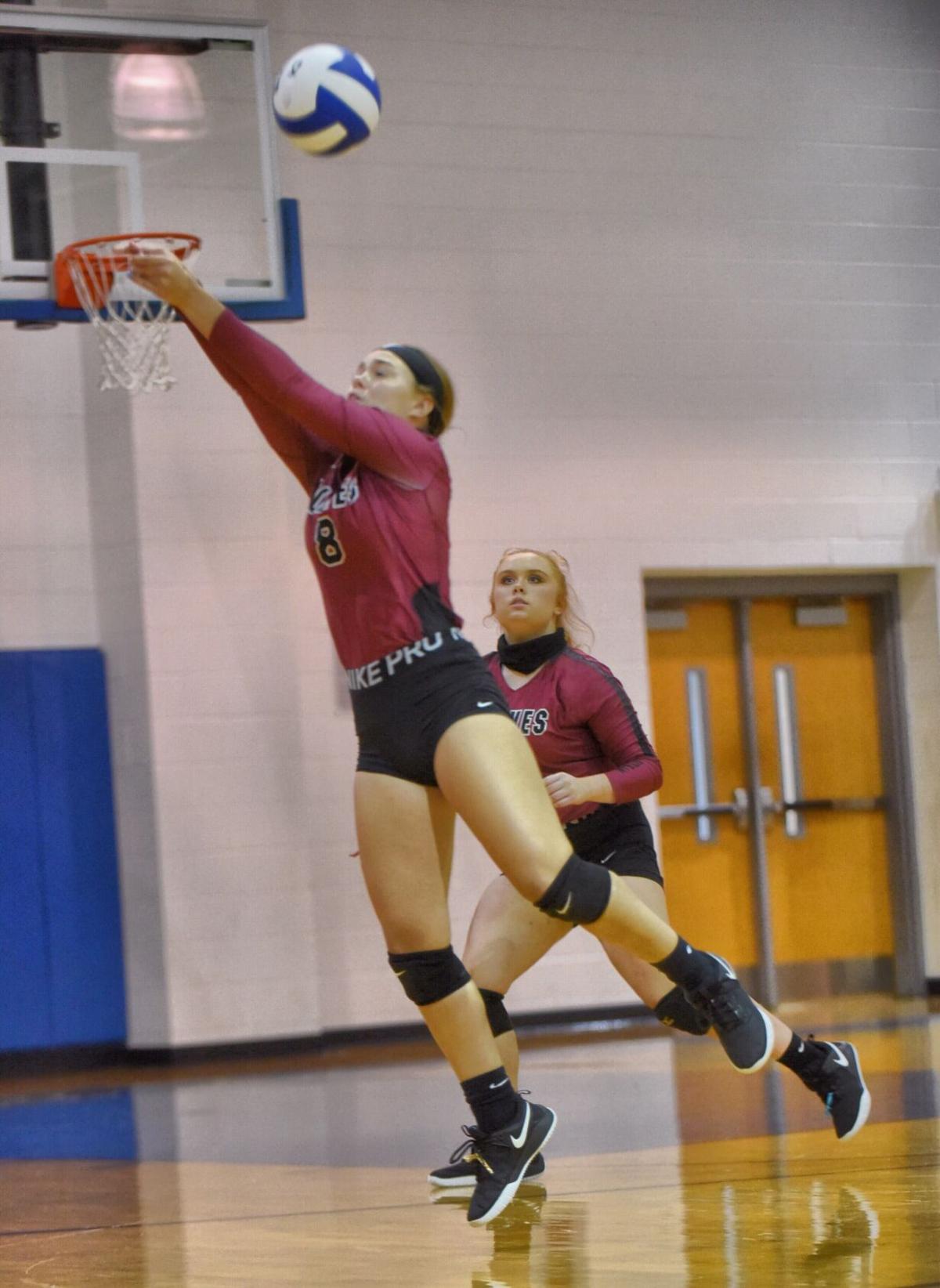 Dothan’s Nicole Turner returns a shot during a game against Rehobeth at Rehobeth on Thursday night. 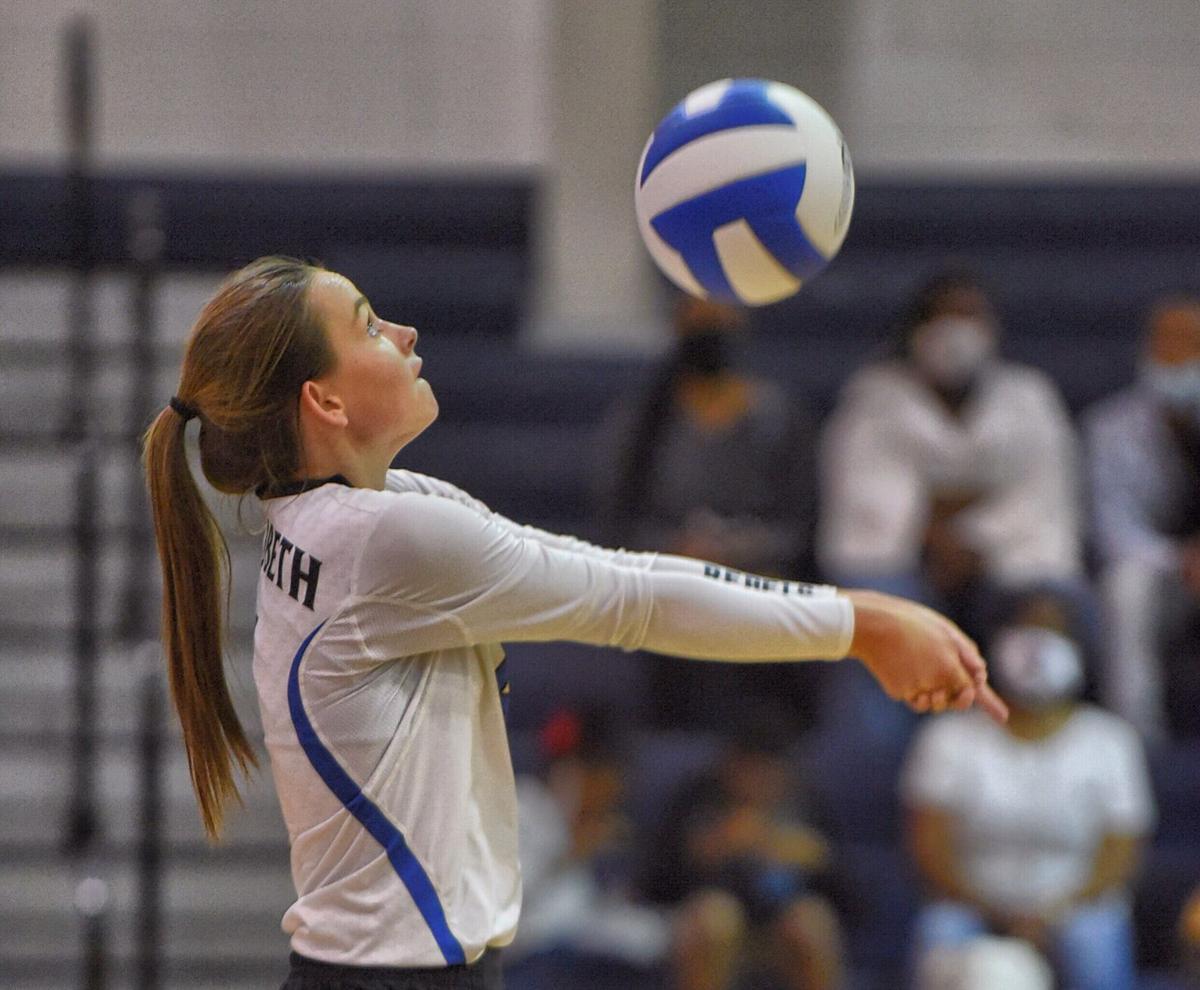 Rehobeth’s Peyton Hartigan sets up a shot during a game against Dothan High School at Rehobeth on Thursday night.

Those were the dominate feelings among Rehobeth and Dothan volleyball players and coaches Thursday afternoon moments before the teams faced each other at the Rehobeth gym.

The contest was among the firsts Thursday throughout the state of Alabama for the 2020 high school volleyball season.

The result, while important to the participants, wasn’t the top matter on the day. After months of uncertainty because of the coronavirus and the fear of a potential positive test shutting down a program, just playing was the overriding theme.

For the players at Dothan, Thursday’s opportunity to play hits home hard. Earlier this week, the school’s football team had to shut down because a player tested positive for COVID-19.

“It means everything right now,” senior Natalie Turner said of playing. “We are just grateful that we have the opportunity to play because you never know when our season could be cancelled just like football. They are out two weeks, so we are grateful. We will take it one game at a time and give thanks to God that we are able to play.”

Volleyball players at both schools have had to sacrifice a lot, keeping away at times from friends or fellow students to protect themselves from potentially getting the virus while wearing masks among all the protocols.

Temperature checks at practice and hand sanitizing as well as constant sanitizing volleyballs during practice are now among the routine.

While players on the floor didn’t wear masks during Thursday’s match, those on the bench along with coaches and game officials did. Players usually donned a mask during time out huddles.

“I have told them, other people don’t have anything to lose, but we have a volleyball season to lose and they have their senior seasons that they can lose from this,” Dothan head coach Brianne Kent said. “Others might not take this seriously, but we have got to if we want to keep playing.”

While excitement and grateful were the most prominent feelings, there were other feelings.

“It was a big relief that I found out we were playing this week,” Rehobeth senior strong side hitter Grayci Webb said.

“I was a little iffy at first because they pushed back school (to September 8), so they had said we wouldn’t be able to play, but then they changed it for sports to where we could. I was glad that it happened because this is my senior season and I want to be able to play.”

Fellow senior Caitlyn Jackson, Rehobeth’s libero, was also glad her final high school season was able to start. She admitted the thought of not having the chance to play was “scary.”

“I am very grateful because I didn’t know if we were going to be able to complete my senior season and knowing I have played the sport since my seventh-grade year,” Jackson said. “I am just happy that we are going to get to play.”

Dothan setter/outside hitter Nicole Turner was also relieved at the chance to play.

“I was worried we weren’t going to be able to play,” she said. “With us (her and twin sister Natalie) being seniors, I was probably more nervous than the rest of the team. It is nice to get out here.”

Rehobeth senior setter Claire Watson, who will sit out the first two weeks because of a knee injury from softball but has been practicing, said there are some new things to get used to on the floor.

“It is harder with these masks on when you are running around the floor (in practice), but it is fine,” Watson said. “Being away from the players – six feet apart – is tough because you want to go in and congratulate them after they did a good thing.”

Dothan’s Natalie Turner had a similar thought about the new protocols.

“We have to wear a mask and that is not the funniest,” Turner said. “Coach comes around with the spray bottle sanitizer and we have to keep changing balls out.”

Watson said players already have made adjustments in their celebrations on the court instead of the normal close group circular celebrations usually seen after an ace and a victory of a set. In fact, she said teammate Jenna Hixson and her had practiced “rubbing elbows.”

“We have to learn to talk to each other from far away or touch feet or elbows,” Watson said.

For Rehobeth coach Leger, the status of the season starting was an up-and-down rollercoaster, especially after Dothan’s football team had to shut down Monday.

“Probably two weeks ago, I was still up in the air about it,” Leger said. “Then I felt confident we would start when I found out school was getting pushed back to Sept. 8. With school starting earlier, I was like, ‘What if we are only in school two weeks and we get shut down (because of a student testing positive)?’ With school not starting until the 8th, I thought we might get a good 1/3 of the season underway.

“Then this week when I saw Dothan’s football got shut down, I was little worried because I didn’t know if they would shut down their volleyball down too. I was worried we might not get to play (Thursday). But we are finally here.”

Dothan’s Kent admitted the positive test in football had her feeling a little frazzled too.

“I would say Tuesday of this week I finally realized that we would make it to Thursday,” Kent said. “With our football team getting shut down so recently for two weeks really had me on edge, hoping the girls were not socializing with the football players. I hate to say that, but we have to be unselfish in these times.”

Several players on both teams already experienced “heartbreak” from the COVID-19, having had their softball season in the spring halted and eventually cancelled after barely getting started. That experience makes them appreciate the chance to play volleyball now.

“It makes us all more grateful to be out here because now we really understand that tomorrow we could get a call that we can’t go play, so we are trying our best each and every practice and game because it might be our last game,” Dothan’s Nicole Turner said.

Dothan’s Nicole Turner returns a shot during a game against Rehobeth at Rehobeth on Thursday night.

Rehobeth’s Peyton Hartigan sets up a shot during a game against Dothan High School at Rehobeth on Thursday night.