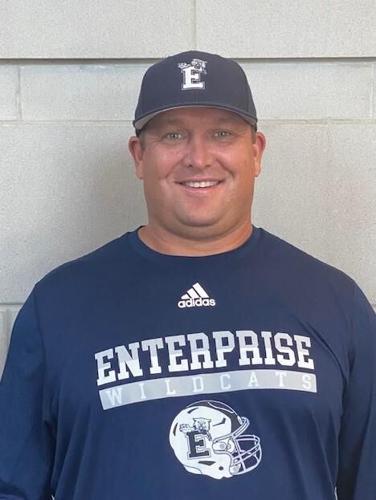 In taking over as the new head football coach of the Dothan Wolves, Jed Kennedy plans to focus on four characteristics.

“We will be a program that is built on building great relationships, having discipline, toughness and never being outworked,” Kennedy said during a Dothan Eagle interview Monday night, shortly after being hired as the Wolves coach.

“Our goal is to have a football program that people will want to be a part of, that people want to support because they love how we play and how we carry ourselves and love the brand of football we play. All that comes back to the kids. We will be a relationship driven program.”

The Dothan City School Board approved Kennedy as the Wolves head coach during its board meeting Monday night.

Kennedy comes to Dothan after serving three years as defensive coordinator just up the road at Enterprise High School.

He has a 14-year career head coaching record of 115-47 in leading five programs, including Brookfield Central and Kenosha Bradford in his native Wisconsin. He guided Brookfield Central to a 49-12 record in five seasons with two state runner-up finishes in Division 2 before coming to Enterprise.

Earlier, he led Kenosha Bradford to a 54-9 record over five seasons highlighted by a Division 1 state title and an undefeated season in 2011 when he was named the Wisconsin Football Coaches Association/Green Bay Packers Coach of the Year honor.

In between, he had one-year head coaching stints at Edgewood (Fla.) and Pulaski (Wis.).

Kennedy got his first head coaching job in 2005 at Decatur MacArthur in Illinois. He coached there two years before leaving for Kenosha Bradford in 2007.

A former standout at the University of Wisconsin-River Falls, he began his coaching career in 2002 as a graduate assistant there before serving two seasons an assistant coach with linebacker duties at Lake Brantley (Fla.).

Kennedy is a native of Alma, Wis., located on the Wisconsin-Minnesota state border.

“We are excited to have coach Kennedy join our DCS family and lead all aspects of our football program from our feeder schools to the high school,” Dothan athletic director Jessica Noble said in a press release announcing the hire.

“His passion is football, but more importantly, he has a passion for building positive relationships with students. It’s an exciting time for our football program, our school, and our community.”

Coe, in the same press release, added, “Jed brings a wealth of experience at the high school and college levels. He is a proven winner. His passion for molding student-athletes was what attracted us to him the most. We look forward to many good things to come under his leadership.”

The new Dothan coach comes aboard after the Wolves finished 2-7 and 4-6 the last two years. Dothan was 8-3 in its inaugural season in 2019 after the consolidation of Northview and Dothan, while it was still a Class 6A school. The program moved up to 7A in 2020 and has struggled in its two years in the classification.

Kennedy said he was impressed with Noble and Dr. Coe in their plans for the program of “being kid-driven, relationship driven, and discipline driven.”

“Ever since the first time I had a chance to sit down with coach Noble and Dr. Coe and listening to their vision, I had nothing but excitement as their vision is my vision is for building a football program,” Kennedy said.

“I certainly have had a chance to look at the program as a region opponent and I never would take a job where I didn’t think we could have a high level of success when it comes to winning. With that being said, we have a lot of work to do to get to that point.”

The first objective of the new Dothan coach comes on Tuesday when he meets with the players.

His second priority is building his coaching staff. He did not announce any hires during Monday’s interview.

“I can promise you, I will build a staff that No. 1 cares about kids and No. 2 is going to work extremely hard to make this program successful,” Kennedy said. “Those are two things that all of our coaches will have and those are two non-negotiable to join the staff.”

J.T. Pitchford says putting down the basketball and concentrating solely on baseball was “a game changer” in his athletic endeavors.

During the first five games of the season, Dothan head coach Jeremy Bynum said his Wolves had shown glimpses of their offensive capability.

The preparation is complete. The stage is set. Now, it’s time for action.