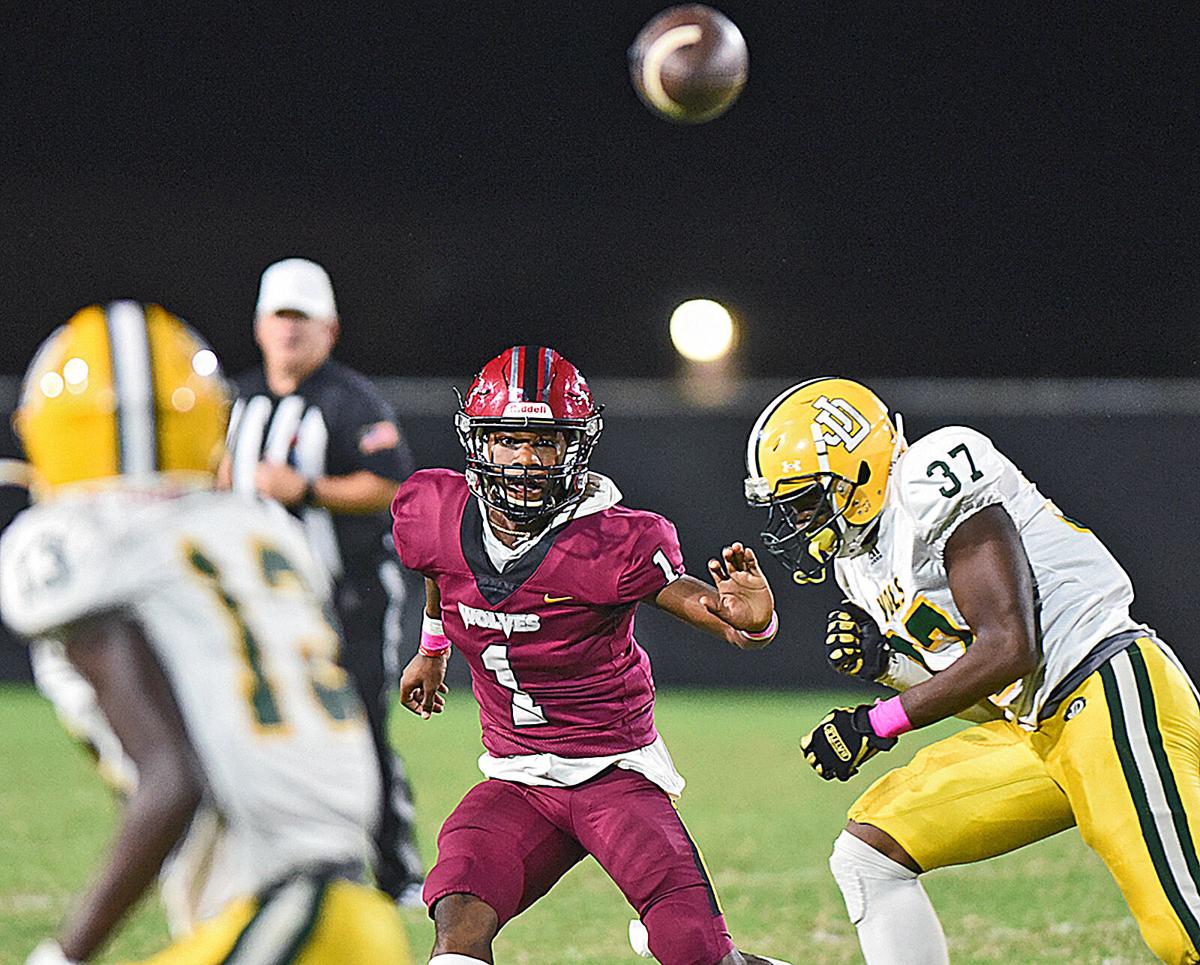 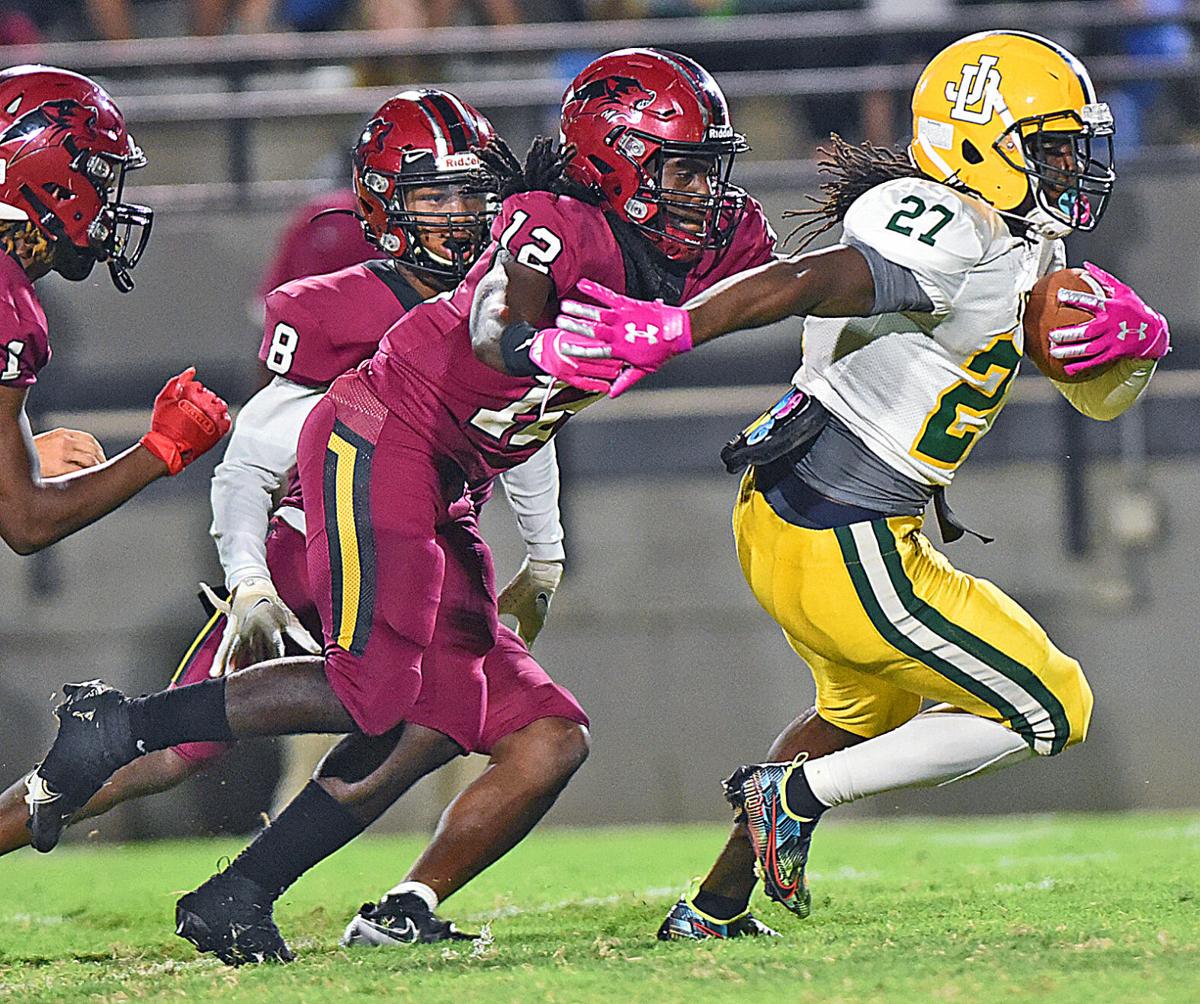 JEREMY WISE For the Eagle

After struggling most of Friday’s contest — and the year, really — the Dothan Wolves’ offense shined in stunning fashion to stun Jeff Davis.

Javierre Jackson fired a tight pass to Braxton Hornsby for an 18-yard touchdown with 2.2 seconds, lifting Dothan to a 20-18 win over its Class 7A, Region 2 rival. The play capped a furious nine-play, 63-yard drive that was needed after the Volunteers took an 18-13 lead with a late scoring pass of their own.

“I thought (Hornsby) was out of bounds. I couldn’t tell from where I was,” said Wolves head coach Smitty Grider, indicating how close of a play Dothan needed to secure the victory. “It must have been a heck of a play on that sideline. It doesn’t (surprise us). We know what he’s capable of.”

The Wolves’ offense, which had not scored more than 14 points in a game entering the contest, again had quiet moments in Friday’s game at Rip Hewes Stadium. The Wolves’ first touchdown didn’t come until the third play of the second quarter when Octavious Thomas rushed into the end zone from 39 yards out.

With the extra point, Dothan had a 7-6 lead.

Jackson faked a handoff to Thomas then fired a pass across the middle to Raymon (Paul) Blackmon. Blackmon picked up a block from a fellow receiver on the outside and raced all the way to paydirt for an 89-yard score.

A high snap on the extra point resulted in a block, leaving the score 13-6 with 8:42 left in the first half.

From there, the Dothan offense went quiet until the final minute of the game. Fortunately in the interim, the Wolves’ defense made some key stops — with the help of a Jeff Davis (1-6, 1-4) squad that committed at least 16 penalties.

Dothan led 13-12 at halftime, which is where the score remained until the latter stages of the fourth quarter.

The Volunteers faced a daunting challenge when they started their penultimate drive. A Dothan punt pinned Jeff Davis, which trailed by one, at its 4 with 4:23 left. On third down, Savion German connected with Donald Harris for a 31-yard gain to give the Volunteers breathing room.

A sack threatened to derail the drive, but the Wolves were whistled for two 15-yard penalties on consecutive plays. The final flag placed the ball at Dothan’s 36, where German threw a 36-yard scoring strike to Rakia McCall with 1:36 left in the game.

The Volunteers’ try for two points failed, leaving the door open for an outright Dothan victory in regulation.

“Our defense has had our back all season. It was time for us to step up and get the (win) for us,” Jackson said.

It didn’t come easy. Jackson scrambled for a first down on the second play of the drive, but two incomplete passes and a sack left the Wolves with third-and-15 situation at their 44.

Jackson, though, connected with Blackmon for a 29-yard gain to reignite the drive.

Again, two incompletions and a sack threatened to kill the possession, but Jackson connected with Blackmon for an 18-yard gain to power Dothan into the red zone.

“Paul made a great play across the middle to get us in range to take some shots,” Grider said. “Really proud of the execution of the two-minute drill. The kids got lined up quickly, and we had two timeouts. That was big, too.”

With 15 seconds left and the clock running, Jackson called the Wolves’ final offensive play. Jackson moved in the pocket then fired toward the end zone near the right sideline, where Hornsby hauled in the game-winning grab.

“The game-winning play, we ran over and over in practice,” Jackson said. “We connected on it all week, and we knew it would be big for us. I had confidence in my receiver. He (converts) it all the time in practice.”

“We work this in practice every day, so I knew it was going to come,” Hornsby added. “When the ball was near me, I turned my head a little bit to catch the ball. I looked (at the sideline), and fortunately I was still in.”

Thomas paced the ground game with 131 yards and a touchdown on 22 carries.

Jeff Davis rolled up 470 yards of offense. German completed 11-of-23 passes for 195 yards, three touchdowns and an interception. He also rushed 13 times for 86 yards.

Marceldrick Brown powered the Volunteers’ ground game with 103 yards on 12 carries. Harris caught eight passes for 159 yards and a touchdown, while McCall added four catches for 91 yards and two scores.

Defensive front delivers for Wicksburg vs. HA in Panther win

NEWTON — When Wicksburg needed an answer for Houston Academy and its passing attack, the Panthers’ defensive line delivered.

Despite struggling on the scoreboard most of the season, Northside Methodist football players have never stopped working this season, says Kni…

Dollar says he did not resign as Headland football coach

A week after not coaching the Headland Rams, Rodney Dollar said Friday during a Dothan Eagle interview that he did not resign as the head foot…