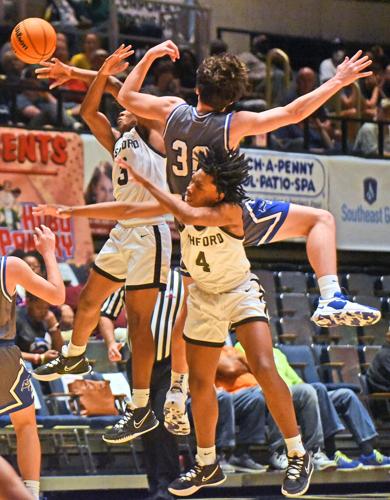 Ashford’s Michael Knight (3) and Cameron Fields battle for a rebound against Rehobeth’s Cayden Turvin during the first half of a game in the Downtown Dothan Hoops Classic on Tuesday night. 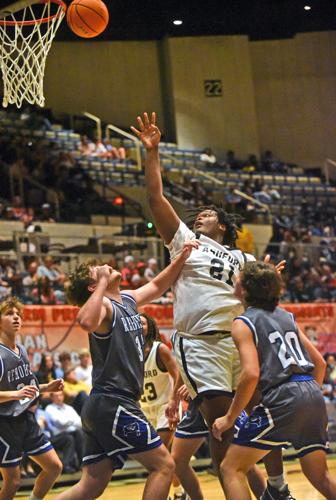 Ashford's Ernest Williams launches a shot during the first half of a game against Rehobeth in the Downtown Dothan Hoops Classic on Tuesday night.

Jacket players made the change work, creating turnovers to spark a decisive second-quarter run during a 81-50 win over the Rebels in first-round action of the tournament at the Dothan Civic Center.

Ashford (7-7) advanced to play at 8 p.m. Wednesday against Geneva County.

A young Rehobeth team, which has no seniors and six of its 14 players as sophomores or younger, dropped to 5-10 and was eliminated from the tournament with the loss.

“It was a great team win,” Ashford head coach Michael Edge said. “Our guys all came out and played together. The whole season we have been up and down, but we came together as a team tonight.”

Four players scored in double figures for Ashford with a fifth with nine points. Pete Reaves, a 5-foot-5 freshman guard, sparked the Jackets with 16 points and five steals off the bench.

“Pete is our energy,” Edge said. “He started the year on JV (junior varsity) but I saw where he could help us (on varsity) in relieving the two guards who start. He brings a spark every game, getting those steals and getting those layups.”

Kobe Small followed with 14 points and Cameron Fields and Stelan Griffin were next with 13 and 12 points, respectively. Ernest Williams added nine points and had a team-high nine rebounds.

Both teams came out clicking on offense. The Rebels hit their first three shots in the first minute and a half, including two 3-pointers by Colton Trotter, while Ashford hit its first two, both by Fields, as Rehobeth led 6-5.

The pace continued for most of the first quarter as the teams were tied at 17 with 1:17 left in the period following a jumper in the lane by Rehobeth’s Baker Hataway.

“We got away from our full-court press and went to more of a half-court trap with pressure on their ball handlers and it was successful,” Edge said.

“They (the players) made the adjustments on defense that we called out. We jumped to the ball (in the halfcourt defense) and we were able to get out and run like we like to do.”

The Jackets, behind their halfcourt defense, went on 16-0 run to midway in the second quarter to build a 33-17 advantage. Ashford created eight turnovers during the five-minute stretch, including four steals, leading to fastbreak opportunities. Three of the steals were by Reaves.

Reaves also paced the offense during the stretch for Ashford with five points. Six players overall scored for Ashford during the 16-0 run as Cade Waller had three points and Small, Williams, Fields and Griffin added two each.

Ashford maintained a comfortable margin to halftime, taking a 37-21 lead to the intermission.

Rehobeth briefly cut it to 13 early in the second half, but Ashford pushed the margin to 53-36 at the end of the third quarter. The Jackets outscored the Rebels 28-14 in the fourth quarter to pull away.

Ashford’s defensive work resulted in 28 Rehobeth turnovers on the night and help limit the Rebels to 38 percent shooting (19-of-50).

Wicksburg 76, Barbour County 31: The Panthers scored the game’s first 16 points and were in control the rest of the game in downing the winless Jaguars.

Wicksburg (9-5) advanced to play the Dothan on Wednesday night at 6:30 p.m. Barbour County (0-10) was eliminated from the tournament.

After Wicksburg opened its 16-0 lead, Barbour County’s Martavious Griggs scored with 2:21 left in the first period for the Jaguars’ first points. The Panthers finished the period with eight straight points to go up 24-2 after one.

The Panthers built the margin to 43-7 by halftime, hitting 16-of-30 shots in the opening half, including 5-of-11 on 3-pointers. Barbour County made only 3-of-25 first-half shots.

Wicksburg, rotating players as much as possible in the second half, built the margin to 71-17 after three quarters before cruising in the final quarter.

Griggs and Dyqwayshon Grubbs had nine points each to lead Barbour County.

Dothan 48, Geneva 46: Trailing most of the game, the Dothan Wolves delivered when it mattered in the fourth quarter Tuesday night, especially on defense, to rally for a 48-46 win over Geneva.

In surviving, Dothan (7-9) advanced to play Wicksburg in Wednesday’s quarterfinals at 6:30 p.m. Geneva dropped to 8-6 with the loss.

Geneva led 45-41 with 3:16 left after a Reagan Brannon layup off a nice pass from Timothy McReynolds, but it would be the last basket of the night for the Panthers.

Dothan’s defense, which allowed only seven fourth-quarter points, earned five steals in the final three minutes to stymie the Panther upset bid. Overall, Dothan was credited with 17 steals in the game.

Jayvis Moton, who sparked Dothan’s offense with six points in the final quarter, scored on a layup with 3:01 left to close the margin to two.

Dothan missed on two shots after two steals, but AJ Porter Jr. converted a layup off an offensive rebound and pass by Bryson Berry. Porter was also fouled on the play and hit the free throw to push the Wolves in front 46-45 with 2:18 left. The free throw gave DHS its first lead since late in the first quarter at 6-5.

Geneva’s 6-foot-6 sophomore Evan Griffin missed a contested dunk, but teammate McReynolds tracked down the rebound in the corner and was fouled with 2:08 left. However, the Panthers were not in the bonus and had to inbound. On the ensuing play, McReynolds missed a shot and Dothan’s Berry, a freshman, came up with his second clutch rebound.

The Panthers, though, earned a jump ball tie-up seconds after the rebound and the possession arrow was in Geneva’s favor, giving the Panthers the ball back.

A steal by Porter – the last of the five late steals by Dothan – led to a foul on Quinton Norton, but Norton missed the 1-and-1 free throw with 31.2 seconds left, opening the door for Geneva after a Johnson rebound.

After a Panther time out with 18.6 seconds left to avoid a trap and the ball going out of bounds off a Dothan player with 17.4 seconds left, Geneva made several passes before Johnson drove to midway down the right side of the lane and put up a mid-lane shot under pressure that missed.

Geneva’s Brannon was underneath and grabbed the rebound and tried to save it toward the middle, but Dothan’s Dowd caught it and was fouled with 0.1 of a second left.

Dowd hit the first free throw to make it 48-46 and missed the second on purpose to not allow Geneva to inbound and get a shot off.

JD Palm led Dothan with 10 points. Norton followed with nine and Porter, Dowd and Moton had eight points each. Dowd had a team-high 10 rebounds.

Johnson led Geneva with 16 points and eight rebounds and Griffin had a double-double of 11 points and 10 rebounds.

Northside Methodist, which is in its second year as an AHSAA member, led most of the first half and stayed close before the Bulldogs made an early fourth-quarter spurt to pull away from the scrappy Knights for a win in the final game of the tournament’s opening round.

Geneva County (11-4) advanced to Wednesday’s quarterfinals to face Ashford at 8 p.m. The Bulldogs are playing the tournament without Henderson, their senior star who is in Orlando at the Under Armour football game.

Northside Methodist (4-8) was eliminated from the tournament, but not before putting a scare into the Bulldogs, who were lethargic early on.

NMA seized the momentum early, racing to a 10-2 lead before Geneva County regrouped and closed the gap to 15-12 by the end of the first quarter.

The Knights, though, stayed in the lead most of the second quarter before the Bulldogs took a 22-20 lead on a J.P. Beasley 3-pointer with 1:20 left in the half.

Northside Methodist’s Justice Hallman answered with a three but Geneva County’s J’quan Broxson put the Bulldogs up 25-23 at halftime on a drive and free throw.

A 3-pointer by Alden Corbin gave the Knights a 28-25 lead early in the third quarter, but the Bulldogs scored eight straight to go in front 33-28 late in the third. Two David Payne baskets ended the run.

A layup by NMA’s Hallman made it 33-30 after three quarters.

Broxson, a senior inside force, took over in the fourth quarter, scoring the seven Geneva Conty points in the first three minutes to help build a nine-point lead and the Bulldogs maintained control down the stretch.

Broxson scored 11 of his game-high 19 points in the final quarter. He finished with a double-double, adding 14 rebounds. Payne and Omari Holmes added eight points each.

Hallman led Northside Methodist with 12 points and Jadyn Watkins had 11.

Up next: The quarterfinals are now set for Wednesday. Providence Christian and Headland meet at 3:30 p.m., followed by defending champion Eufaula against Houston Academy at 5 p.m.

Dothan and Wicksburg battle at 6:30 p.m. and Ashford meets Geneva County at 8 p.m.

Wednesday’s winners play in the semifinals on Thursday at 6 and 7:30 p.m. The tournament consolation and championship games are set for Friday night.

During his baseball playing days at Central Alabama Community College, Parker Moman played for a successful coach in Steve Lewis.

Ron Watson will now be coaching on the basketball court that bears his name.

Eufaula twins Caleb and Josh Paige have played basketball together on the same teams all their lives.

Luke Fripp scored goals in bunches in tallying 41 during the season for Providence Christian, while Joe Nelson returned to the sidelines to le…

Wanting to develop young kids into men and restore Abbeville Christian’s football team back to winning heights, Matthew Mims has taken over as…

LeBlanc to launch program tying sports with education across Wiregrass

Kenneth LeBlanc is a visionary.

OXFORD – Despite a gutsy effort, Geneva’s softball team came up short of a state title Friday at Oxford’s Choccolocco Park.

HEADLAND – Headland’s Tee Hardamon and Patrick Burke figure they have been playing basketball together since they were 6 or 7 years old.

Colin Kaepernick secures Raiders workout after 5 years out of NFL

Ashford’s Michael Knight (3) and Cameron Fields battle for a rebound against Rehobeth’s Cayden Turvin during the first half of a game in the Downtown Dothan Hoops Classic on Tuesday night.

Ashford's Ernest Williams launches a shot during the first half of a game against Rehobeth in the Downtown Dothan Hoops Classic on Tuesday night.