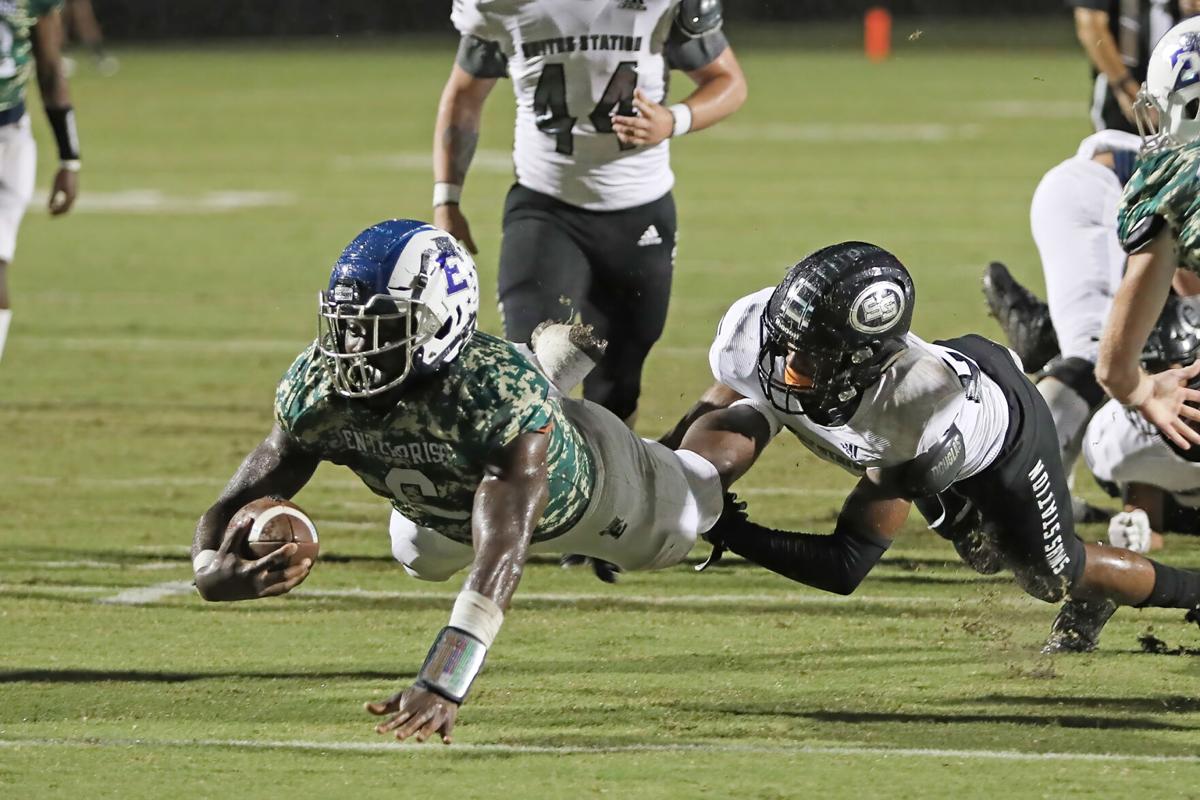 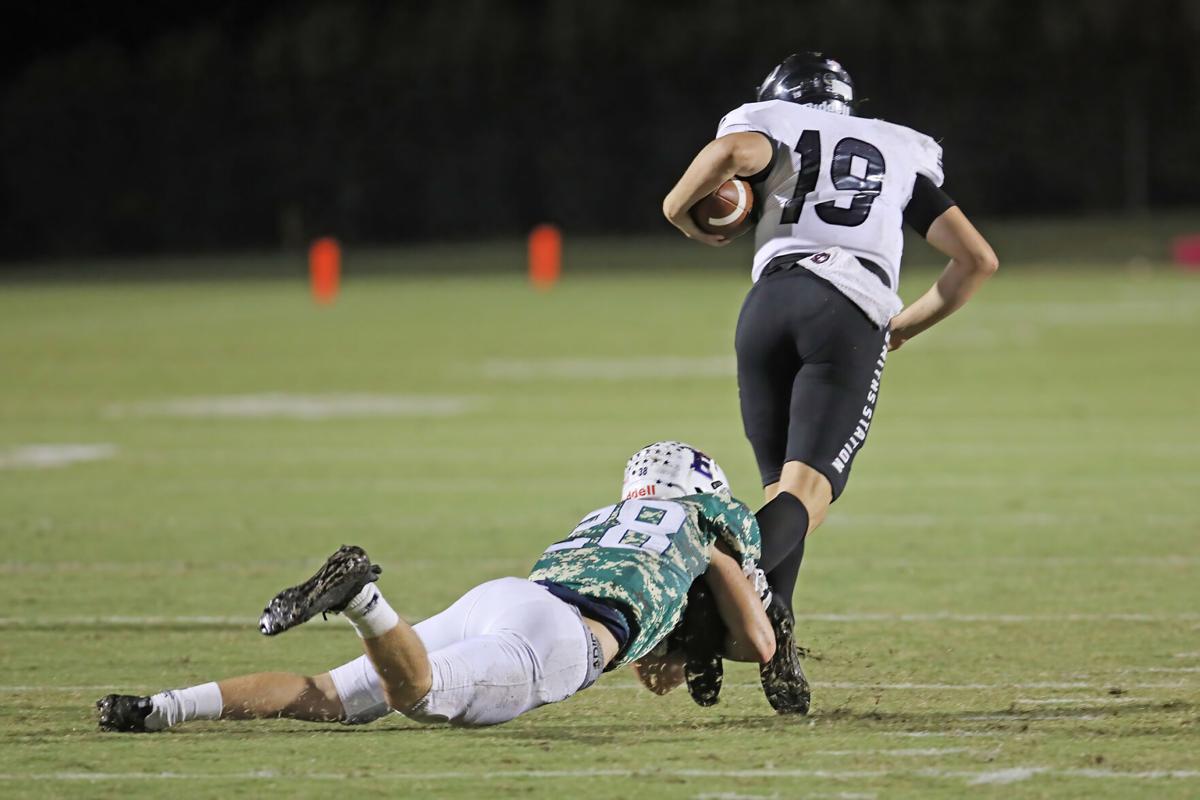 Julio Jones of Enterprise makes a diving tackle during a win over Smiths Station Thursday night.

And even when the Panthers did, Enterprise seemed to find a way to make a play.

The Wildcats’ 35-13 victory came with an exclamation point on the final play of the third quarter.

Facing an unlikely third-and-27 at the Smiths Station 45, Quentin Hayes lofted a high pass down the right sideline for Josh McCray, who was well covered. It didn’t matter. McCray timed his leap perfectly, came down with the ball, stayed on his feet after a brief stumble and finished the 45-yard touchdown play.

That gave the Cats a 28-7 lead at the start of the fourth quarter.

That set up a 10-play, 73-yard drive to a touchdown. Hayes threw a 10-yard completion to McCray in the left flat that converted a third-and-4 and kept the drive going at the Smiths Station 26.

The drive stalled out, but on fourth-and-13 from the 29, Hayes found Jomari Bayaban on a 29-yard touchdown pass in the end zone. Matt Sheahan added the extra point and Enterprise led 7-0 with 3:50 left in the first quarter.

The Panthers got nothing going offensively in the first half. After a three-and-out, Enterprise went on another long drive. The Cats came up empty, however, when a fumble on a handoff exchange resulted in a turnover on third-and-goal from the 3.

Smiths again went three-and-out on its next two possessions – the second of which ended when Enterprise linebacker L.Z. Leonard sacked quarterback Corey Minton for a 10-yard loss on third-and-2 from the 28.

The Cats’ drove to paydirt with the ensuing punt. McCray took a pitch on a counter, then pitched back to Aiden White, who threw a strike to quarterback Hayes running alone up the right sideline.

The “Philly Special” play went for 33 yards and a first down at the 12-yard line. Mykel Johnson then carried off the right side for 11 and a first-and-goal at the 1. McCray took a direct snap and powered into the end zone off right guard for the score with 2:20 left in the first half.

Smiths Station got its second first down of the half on its next possession. It’s third came on a holding penalty against the Cats, but the Panthers trailed 13-0 at halftime. The Panthers didn’t have a snap on Enterprise’s side of the field in that half.

In five first-half possessions, the Wildcat defense held Smiths Station to 45 yards of offense on 15 snaps and 10:14 of possession time.

The Enterprise offense opened more breathing room with the first drive of the third quarter. A play after Hayes hit Jared Smith for 17 yards and a first down to the 30, running back Zy’Air Boyd covered that distance off the wing, ending a five play, 67-yard drive. Johnson added a two-point conversion for a 21-0 lead.

Smiths Station, whose running attack was kept under wraps most of the night, answered with its first touchdown. Minton, the Panthers’ punter and quarterback, ran a fake punt 47 yards for a first down at the Enterprise 31. Four plays later, facing fourth-and-6, Minton was under a heavy rush but hit Cianan Williams for 27 yards and the touchdown with 5:07 left in the third quarter.

Smiths came back with a 20-yard TD pass from Minton to Ahmari Peabody.

The Cats answered with a clinching touchdown on a 2-yard TD run by Keion Dunlap, which was set up one play earlier in McCray’s 25-yard run around left end on fourth-and-1 at the 27.

Earlier in the week against Jeff Davis, Enterprise raced to a quick comfortable lead, lost it and then regained control in taking a win.

Opelika boys basketball coach Emanuel Brown has resigned four games into his tenure with the Bulldogs.

Julio Jones of Enterprise makes a diving tackle during a win over Smiths Station Thursday night.