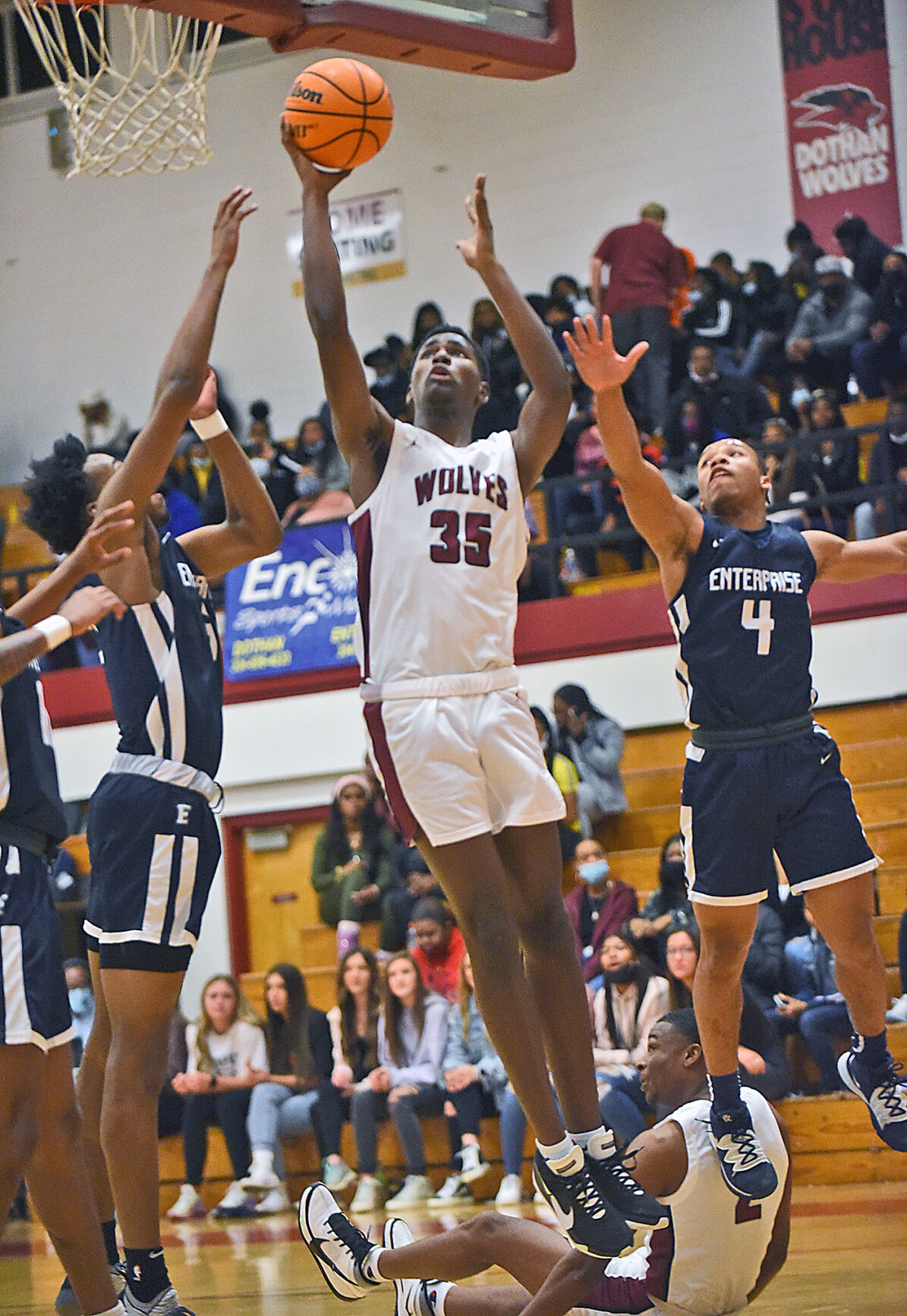 Dothan High's J.D. Palm shoots a jump shot during a game against Enterprise on Friday night at Dothan High. 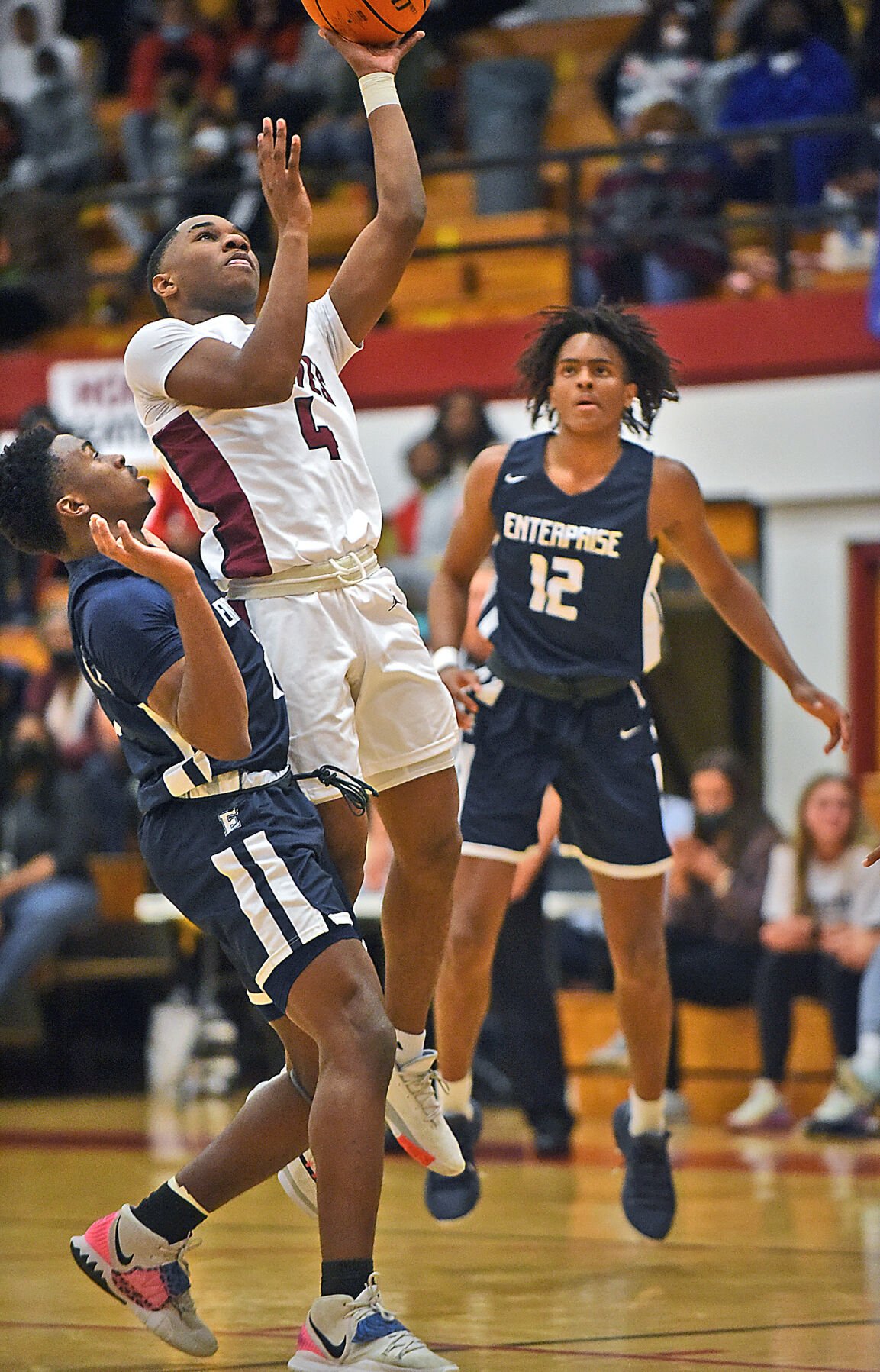 Dothan High's Quinton Norton goes in for a shot during a game against Enterprise on Friday night at Dothan High.

Earlier in the week against Jeff Davis, Enterprise raced to a quick comfortable lead, lost it and then regained control in taking a win.

On Friday, the Wildcats again roared to quick lead, but this time stayed in control, answering each time Dothan gained momentum before pulling away in the second half to a 54-37 win over the Wolves at the Dothan gym.

The Wildcats jumped out to an 8-0 lead three minutes in and increased the margin to 11-0 before Dothan scored. Enterprise led the rest of the way, though the Wolves did work it down to four points midway in the third quarter. The Wildcats, though, went on a 9-1 run to build the advantage back to double digits and padded the margin to as much as 19 in the fourth quarter before winning by 17.

“It was our best start,” Enterprise head coach Rhett Harrelson said of the first-quarter surge. “We have had good starts in the past but then we had letdowns whether it be a five-point lead or a 10-point lead and let teams come back to tie us. Then it is a dogfight.

“That is kind of what happened in our first area game against Jeff Davis. We had a really good start, got up 9-0 and they fought back by early in the second quarter and it was a dogfight the rest of the game. Dothan did a good job of trying to answer and picked up the energy, picked up their defense, but we did a good job of controlling the pace and stayed solid.”

Quentin Hayes, who led the Wildcats with 17 points, scored on a drive 12 seconds into the game and added another drive roughly two minutes later. Josh McCray earned a putback and Hayes followed with a fastbreak layup for an 8-0 lead with 5:01 to go in the opening quarter.

During the three-minute stretch, Enterprise hit four of seven shots and scored on four of its first six possessions, while Dothan struggled with three missed shots and two turnovers against Wildcat pressure.

McCray, who followed Hayes in the Wildcats' scoring with 15 points, hit 1-of-2 free throws with 4:05 left and Keion Dunlap scored on fastbreak layup off a nice pass from Jalen Cunningham following a steal by Jay Sconiers to make it 11-0 with 2:36 left in the period.

Prior to Dowd’s trey, Dothan was 0-of-6 from the floor with four turnovers. The Wildcats held the Wolves to one shot on six Dothan field goal attempts.

“I thought our energy was really good at the start,” Harrelson said. “It was something we have been talking about and working on all season long. We were able to come out and stay solid defensively. We didn’t gamble. We kept everything in front and finished possessions with block outs (for the rebounds) then got good shots on offense.”

After a Jared Smith off-balance jumper of the right side of the lane under pressure for Enterprise, the Wolves finished the period with five-straight points to cut the margin to 13-8. Quinton Norton hit a 3-pointer and 6-foot-9 eighth grader J.D. Palm scored low for Dothan.

Enterprise, though, opened the second quarter on a 10-1 run to take a 23-9 lead with 4:27 to go before halftime. Hayes started the run with a 3-pointer and had five points to spark the surge. McCray added a basket as he was going down backwards on the floor as he was fouled, while Cunningham hit a shot in the lane and Elijah Terry hit 1-of-2 free throws to also highlight the spurt.

Dothan followed with an 8-2 run, including five straight points on the back side to cut it to 25-17 with 1:11 to go before intermission. Palm, who led Dothan with 12 points, scored down low after a nice pass form Jayden Folmar and Raymond Blackmon followed with 3-pointer.

Enterprise finished the half with 1-of-2 free throws each by Mykel Johnson and McCray to go up 27-17 at halftime.

Dothan opened the third quarter with five straight points – a 3-pointer by Derrick Fletcher and a basket down low by Palm - to cut it to 27-22.

After missed opportunities by both teams, Enterprise surged in the final minute, scoring six straight points to seize a 40-28 lead going to the fourth quarter.

McCray scored on a layup after a nice pass from Jordan Hines before Hayes made two free throws with 24.6 seconds left and finished the quarter, driving three-fourths of the court after an inbound pass from the baseline for a layup with 3.5 seconds left.

The Wildcats quickly built the margin to 16 in the opening minute-and-a half of the fourth quarter, highlighted by an ally-oop dunk by Terry off a pass from Hayes then cruised in for the win.

Enterprise had an efficient night offensively, hitting 20-of-47 shots and making only 10 turnovers.

Dothan’s offense struggled, mostly inside the 3-point arc. Overall, the Wolves 13-of-47 shots, but were just 6-of-26 on two-point shots with most of Enterprise’s 11 steals coming inside the lane.

While it struggled inside the arc, the Wolves were efficient outside, hitting 7-of-19 3-pointers.

Enterprise led 12-7 with 6:05 to go in the second quarter following a 3-pointer by Nene Nelson, but Dothan’s Alexis Hudgens and Amiyah Rollins came to life, while the Wildcats went cold and also struggled with turnovers.

Hudgens scored on a bank shot and free throw and Rollins scored on two drives to push the Wolves in front 14-12.

Dothan led 18-14 in the final minute of the half when it capitalized on Enterprise’s point guard going out of the game in foul trouble. The Wolves pressured the Wildcats and earned three straight steals to score five points in the last 18 seconds, the last a 3-pointer by Hudgens, to go up 23-14 at halftime.

The Wolves continued to pull away in the third quarter, building a 31-14 advantage as Enterprise missed on 11 straight shots.

Dothan increased the lead to 22 in the fourth quarter before taking the 12-point win.

Rollins finished with 21 points and Hudgens 18 to lead Dothan.

Shakayla Flowers led Enterprise with nine points, all in the fourth quarter. Nelson and Jalyn Williams added eight each.

Dothan JV boys 37, Enterprise 35: Navion Flowers scored on a layup and Jayvis Morton hit 1-of-2 free throws on two different trips in the final minute to help Dothan overcame a 35-33 deficit and earn the win.

Enterprise, which had nine players score, was led by Jadell Presley with seven points and Dylan Baldwin with six.

ARITON – Ian Senn scored 19 points in leading Ariton to a 54-36 win over Elba in boys high school basketball on Thursday.

Dothan High's J.D. Palm shoots a jump shot during a game against Enterprise on Friday night at Dothan High.

Dothan High's Quinton Norton goes in for a shot during a game against Enterprise on Friday night at Dothan High.