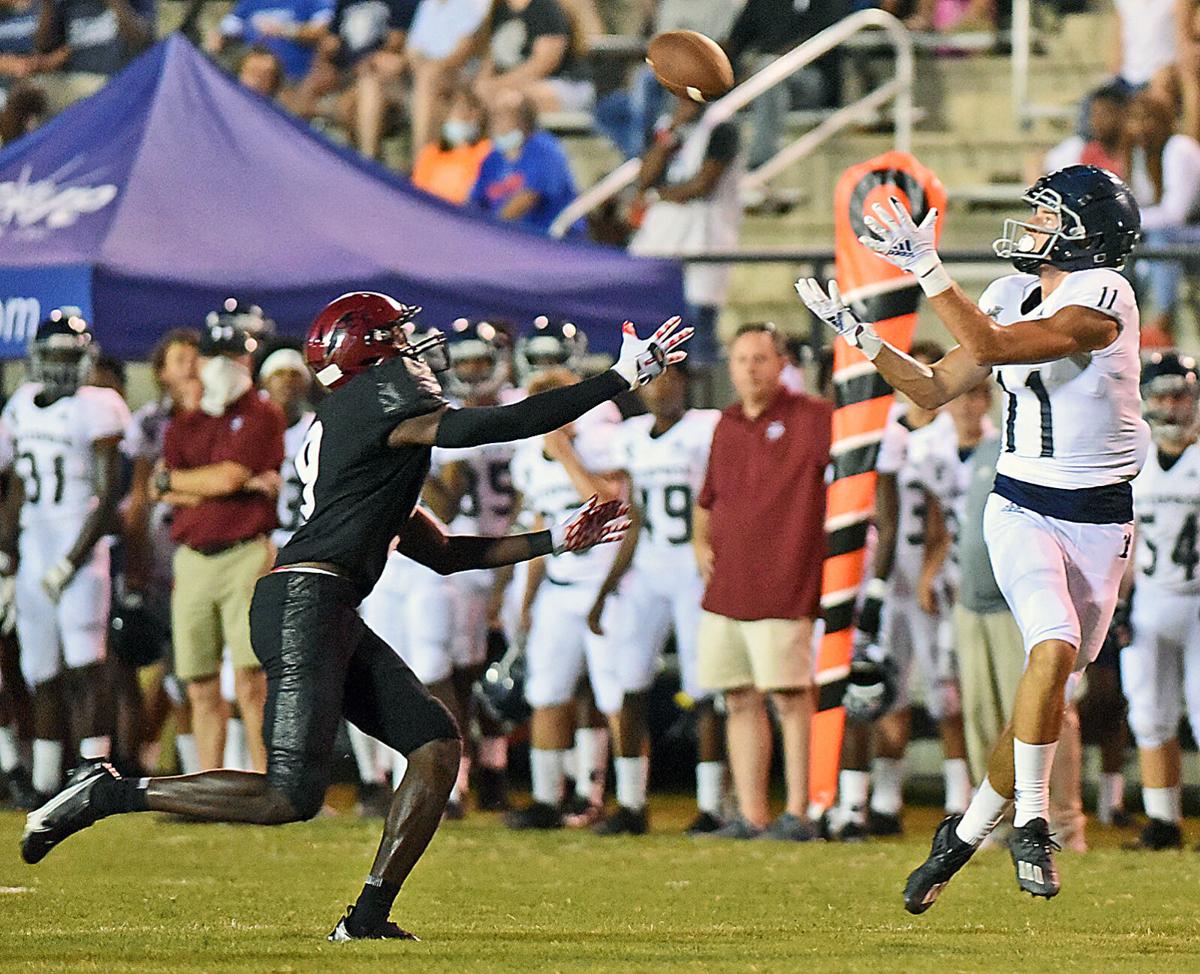 Enterprise receiver Jared Smith hauls in a touchdown pass as Dothan's Kolby Reese defends during the first quarter of a game at Rip Hewes Stadium on Friday night. 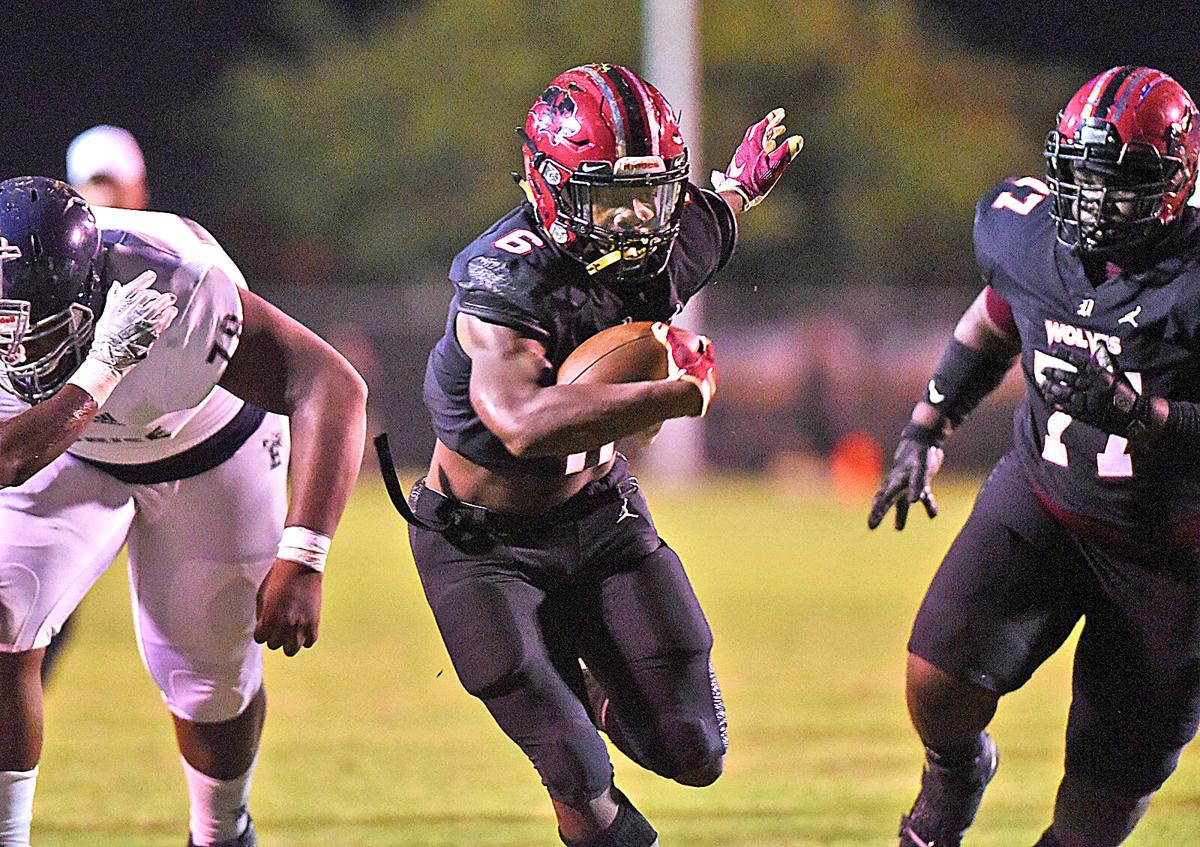 Dothan High running back Jaylin White breaks a away for a touchdown during the second quarter of a game against Enterprise at Rip Hewes Stadium on Friday night. 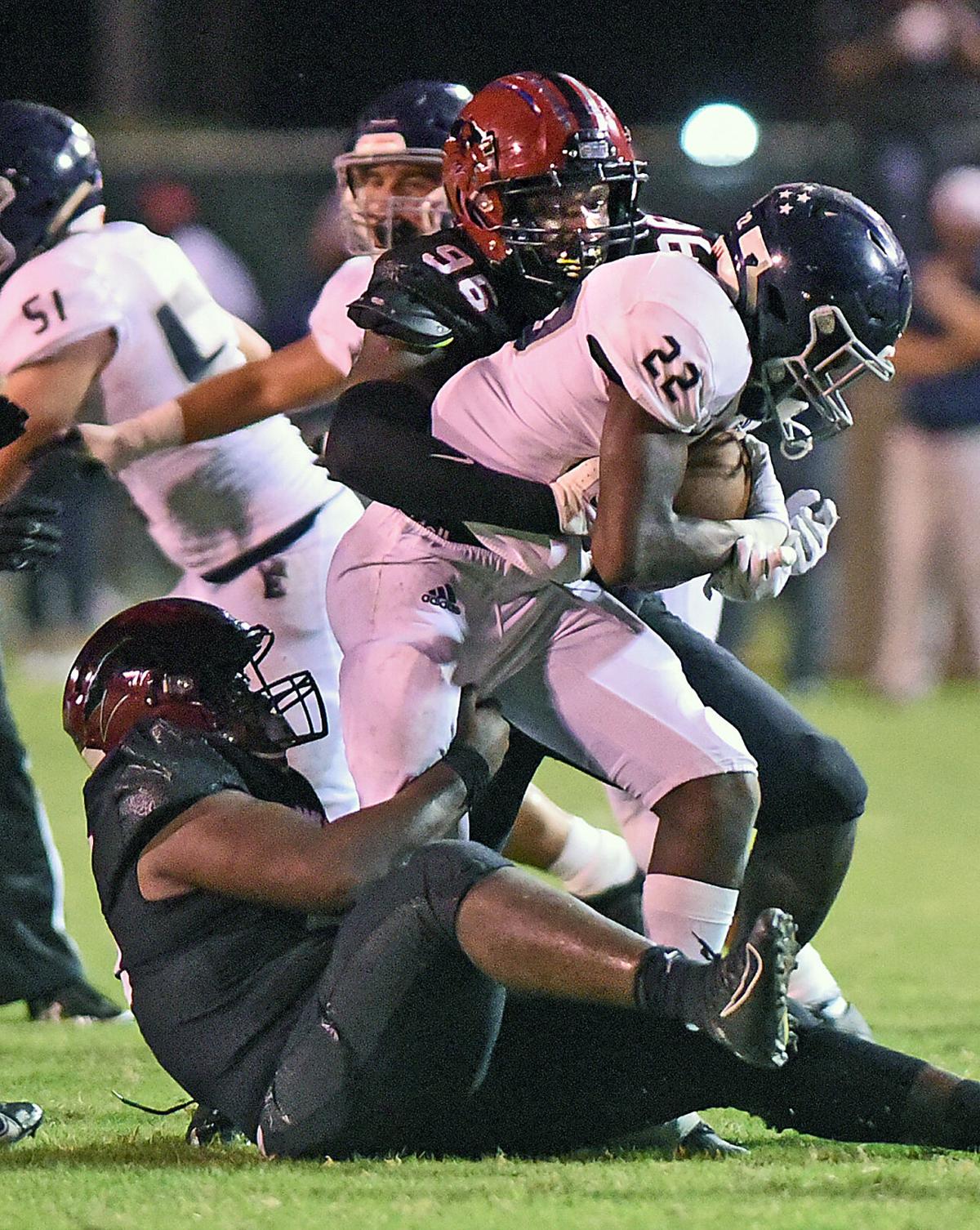 The team name may change at Dothan and the cast of characters might be different, but Enterprise winning at Dothan’s Rip Hewes Stadium remained a recent tradition Friday night.

The Wildcats broke open a close game with three scores over a five-minute stretch in the second half and rolled to a 42-13 win over the Wolves in a Class 7A, Region 3 game.

The win was the 16th in the last 19 games for Enterprise and eighth in the last nine trips to the Dothan venue, which includes wins over the Northview Cougars and the Dothan Tigers, the precursor to the current Wolves.

Enterprise quarterback Quentin Hayes threw for three touchdowns and rushed for one, Josh McCray added a rushing score and Jaylon Webster returned an interception for a touchdown for EHS. The Wildcats opened up a 14-0 lead early but had to pull away from a 21-13 advantage with the three scores from late in the third quarter to early in the fourth quarter.

It was a similar script as last year, only in reverse with Dothan pulling away to a lopsided win in the second half.

Enterprise improved to 2-0 with Friday’s victory, 1-0 in region play, while Dothan fell to 0-2 overall and 0-1 in region. The game was the season opener for Dothan, which had to quarantine for two weeks because of a COVID 19 positive test and forfeited last week’s scheduled game against Park Crossing.

Enterprise, noted for its single wing and double wing running formations, seized a quick a 14-0 first-quarter lead through the air.

On its first possession, the Wildcats drove 70 yards in 10 plays, scoring on a 20-yard touchdown pass from Hayes to Mykel Johnson. Hayes threw deep to the left side and Johnson caught it at the 10, circled around a Dothan defender and raced to the end zone for the TD.

Matthew Sheahan added the extra-point kick to make it 7-0 with 5:29 left in the opening quarter.

Hayes completed 2-of-2 passes for 34 yards in the possession, which also was also highlighted by a 20-yard run by Hayes off the left side, a play before the TD pass.

Dothan, which struggled offensively for most of the first half, earned a first down on a 19-yard run by Jaylin White, but had to punt.

The Wildcats struck four plays later, going to the air again for the score. Like he did on the first score, Hayes threw deep to the left side and Jared Smith caught it at the 20 behind a defender and beat the oncoming safety from the middle of the field to the end zone to complete a 44-yard TD pass.

Sheahan booted the extra point kick, pushing the visiting Wildcats up 14-0 with 31.6 seconds to go in the opening stanza.

Dothan’s White gained a first down on a 15-yard run on the ensuing series, but the Wildcats stuffed the next three plays, forcing a punt.

However, the Wolves got it back three plays later with a fumble recovery at the Wildcat 7. One play later, White scored off the right side with 10:02 left in the half. William McCarthy converted the extra point kick, closing the gap to 14-7.

The Wildcat defense dominated the first half, allowing only four Wolves’ first downs in six possessions. The aggressive unit gave up only 49 rushing yards, sparked four straight plays of 34 yards in losses late in the half. Dothan quarterback Bauer Sharp, under pressure most of the half, completed just 3-of-6 passes for 25 yards, but he was forced to scramble many times.

The Wildcats would eventually sack Sharp five times, most coming in the second half.

The Enterprise offense, meanwhile, earned 128 yards rushing and 83 yards passing in the first half off 4-of-5 passing, highlighted by the two TD passes.

The Wildcats increased their lead midway in the third when Hayes made a nice fake sweep to the left and rolled right and spotted a wide open Smith in the end zone  a 10-yard TD pass on a 3rd-and-9 play. Sheahan added the extra point kick to make it 21-7 with 2:49 left in the third.

Dothan, though, answered on the ensuing series. White, the Wolves’ standout back, moved from the backfield to the slot before the snap and Sharp found him straight down the middle of the field on a slant pass. White caught it at the 45, turned and nearly ran over a game official before turning on the jets to the end zone for an 80-yard TD pass play. The extra point failed, but Dothan closed it to 21-13 with 2:27 left in the third.

Enterprise quickly answered before the end of the quarter. Sparked by a nifty 39-yard kickoff return by McCray, who hurdled one player and broke another tackle on the return, the Wildcats moved into Wolves territory on the following play. Hayes, who was brilliant running the EHS offense, took an option to the right to the 50 then pitched to trailing running back Johnson, who took 32 more yards to the 18.

Three plays later, McCray, out of the wildcat formation, scored up the middle on a 3-yard run. Sheahan added the point after kick to make it 27-13 with 23.6 seconds left in the third quarter.

The Enterprise defense then gave the Wildcats some breathing room. Under pressure, Sharp threw wildly down the middle of the field and Webster out-leaped the Dothan receiver for it. Webster then took it to his left and raced down field for a 52-yard interception return for a touchdown. McCray scored on a two-point conversion, making it 35-13 Wildcats with 10:57 left.

Hayes put the exclamation point on the victory by scoring on a 17-yard run with 7:16 left in the game. Sheahan added the extra point to make it 42-13.

Dothan, behind 11 plays resulting in 79 yards in losses, including the five sacks, finished with just 39 yards rushing. White had just 40 yards rushing and missed the entire fourth quarter with cramps. Sharp ended up 7-of-19 for 168 yards with one TD and one interception.

Dothan Wolves fall to Prattville on the road

PRATTVILLE – The Dothan Wolves are still in search for their first win of the season.

Northside Methodist and North Bay Haven (Fla.) went back and forth throughout Saturday’s game at Bozeman High in Panama City.

Class 5A No. 2 ranked Providence Christian won all six of its matches to win the 11th Annual Enterprise Invitational Saturday in Enterprise.

G.W. Long won four of its six matches and won the Silver Bracket of the 11th Annual Enterprise Invitational Saturday in Enterprise.

After dealing with Hurricane Sally and no school or practice for a couple of days, six Dothan Eagle high school volleyball coverage teams retu…

Enterprise receiver Jared Smith hauls in a touchdown pass as Dothan's Kolby Reese defends during the first quarter of a game at Rip Hewes Stadium on Friday night.

Dothan High running back Jaylin White breaks a away for a touchdown during the second quarter of a game against Enterprise at Rip Hewes Stadium on Friday night.