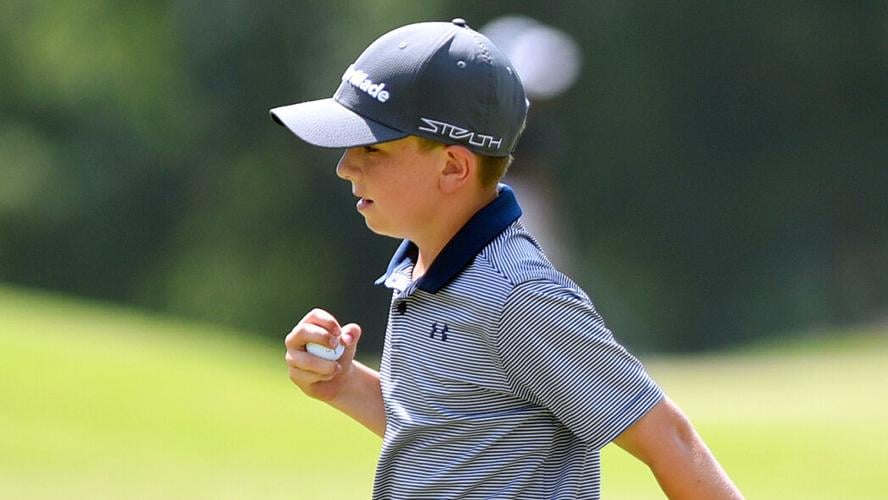 Logan McGinn gives a fist pump after sinking a putt on the 18th hole Tuesday to win the Future Masters’ 10-under age division at the Dothan Country Club. 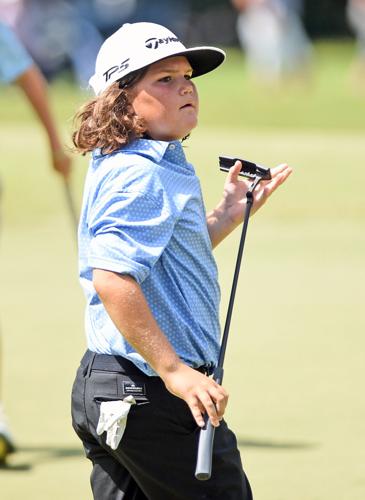 Benny Ossi reacts Tuesday after lipping out a putt on the 18th hole to get in a playoff for the Future Masters' 10-under age division at the Dothan Country Club.

Playing in the second to last group in Tuesday’s final round of the 10-under Press Thornton Future Masters at the Dothan Country Club, Logan McGinn knew he had to have a good final hole.

The South Williamsport, Pa., resident delivered with a clutch birdie on the 18th hole to take the lead as the final group behind him approached the last hole.

In the final group was Benny Ossi of Ponte Vedra Beach, Fla., who was only a stroke behind McGinn following a bogey on 17.

Ossi put his wedge approach shot within 20 feet of the hole for a shot at a birdie and forcing a playoff with McGinn. However, his putt went just off the edge of the hole and past. Ossi had to settle for a par, giving McGinn the title.

“I cried,” McGinn said of his reaction to winning the Future Masters title. “It felt so amazing. It is just awesome.”

The 10-year-old McGinn said it was a special to win the title, noting the current No. 1 player on the PGA tour won the same age division in 2006.

“It feels really special,” McGinn said. “I love to win this event. I remember that Scottie Scheffler won it when he was 10 and he has now won four events this season (on the PGA tour). So I am happy to win it.”

Playing a bogey-free round, McGinn won with an impressive 4-under 31 on the DCC’s back nine on Tuesday to go with opening round 36 to finish with a two-day 3-under 67 total, just one off the 10-under 18-hole record of 66.

Ossi finished in second place with a 2-under 68, matching 34 scores on both days.

Lincoln Rubis of Farmers Branch, Texas, captured third place and Coley Cassedy of Grovetown, Ga., Monday’s first-round leader with a 33, took fourth after both finished with 1-under 69 totals. Rubis earned the higher spot based off the USGA tiebreaking policy of best back-nine finish as he had a 34 to Cassedy’s 36 on Tuesday.

Martin Bustos of Chattanooga, Tenn., was fifth with a 71 following a 34 on Tuesday and Trebor Melendez was sixth after his 35 on Tuesday also put him at 71.

Bryce Lloyd of Leesburg, Va., Cullen Beck of Greenville, S.C., Eli Townsend of Barlett, Tenn., and Crosby Revell of Bowdon, Ga.., rounded out the top 10 after all finished with a 72.

Dothan’s Wiley Alford finished in 20th place in the 40-golfer field with a 38-39—77 and fellow Circle City resident Mac Steltenpohl dropped down to a 23rd place tie after falling off to a 42 on Tuesday after a 37 on Monday.

McGinn entered Tuesday’s round three strokes off the lead after his opening-round 36.

“Just be aggressive and make as many putts as I could,” McGinn said of his approach for the round.

“After I made the birdie putt on 15, I knew that put me at 2-under for the day and I knew the leader (going in) was 2-under, so I knew I had a chance to winning it,” McGinn said.

Still, he didn’t totally know for sure what was happening behind him as he approached the final hole, though he did get an update or two during the round from his dad.

“I knew I had to birdie that to have a chance,” McGinn said of the 18th hole.

“On the drive, I was just trying to hit it as far as I can down the fairway. Then my approach shot, I was trying to get it to inside 10 feet because I know I was making a lot of putts. The putt was a little downhill right to left. I was trying to dial it right in the hole and I got it in.”

With the clubhouse lead, McGinn then had to wait for Ossi and Cassedy, who both still had a chance to forge a tie. Cassedy, who was 1-under, had to have an eagle, while Ossi, one back, needed a birdie. Both finished with par.

Ossi, though, nearly forced the playoff.

“I hit a perfect drive and my wedge was like 20 feet (of the hole),” Ossi said. “I barely missed it (the birdie putt) on the high side.”

“I hit my approach shot over the green and I had a 5-foot putt and it lipped out,” Ossi said. “You can’t be far (away) from that hole because it is a tough chip and I chipped it good, but I missed that putt.”

“I felt great,” Ossi said. “I just went out and played my game.”

McGinn said his short game was pivotal to his win.

“My wedges,” McGinn said. “I was hitting them to inside 10 feet on every shot pretty much and then made putts.”

“These last couple of weeks to months, I have struggled a little bit with putting, but today I did really good with it,” McGinn said.

“This is six in a row (tournaments) and I have won four of the events and come in third and second in the others,” McGinn said.

Gregory Psaki of New York City won the age group’s Bill Maddox Award for most improved score from the first round to the second round. Psaki improved by 10 strokes, going from 46 on Monday to 36 on Tuesday.

One of the top senior high school football players in the Wiregrass has narrowed his college choice down to six schools.

It appeared any drama was over when eventual champion Tyler Spielman of Cave Creek, Ariz., teed off on the final hole holding a two-stroke adv…

During the past year, Geneva County’s Emmanuel Henderson had a dominating football season and a spectacular basketball campaign, Houston Acade…

FUTURE MASTERS: Locals give it their all in final round

Dothan natives Luke Thornton and Mason Crowder walk to the ninth green side-by-side, park their pushcarts and proceed to finish their round in…

Second round play was somewhat faster with lower scores overall, but there is still very little separation going into the final round of the 1…

Super 12 athletes, coaches to be recognized during banquet Sunday at Civic Center

Logan McGinn gives a fist pump after sinking a putt on the 18th hole Tuesday to win the Future Masters’ 10-under age division at the Dothan Country Club.

Benny Ossi reacts Tuesday after lipping out a putt on the 18th hole to get in a playoff for the Future Masters' 10-under age division at the Dothan Country Club.