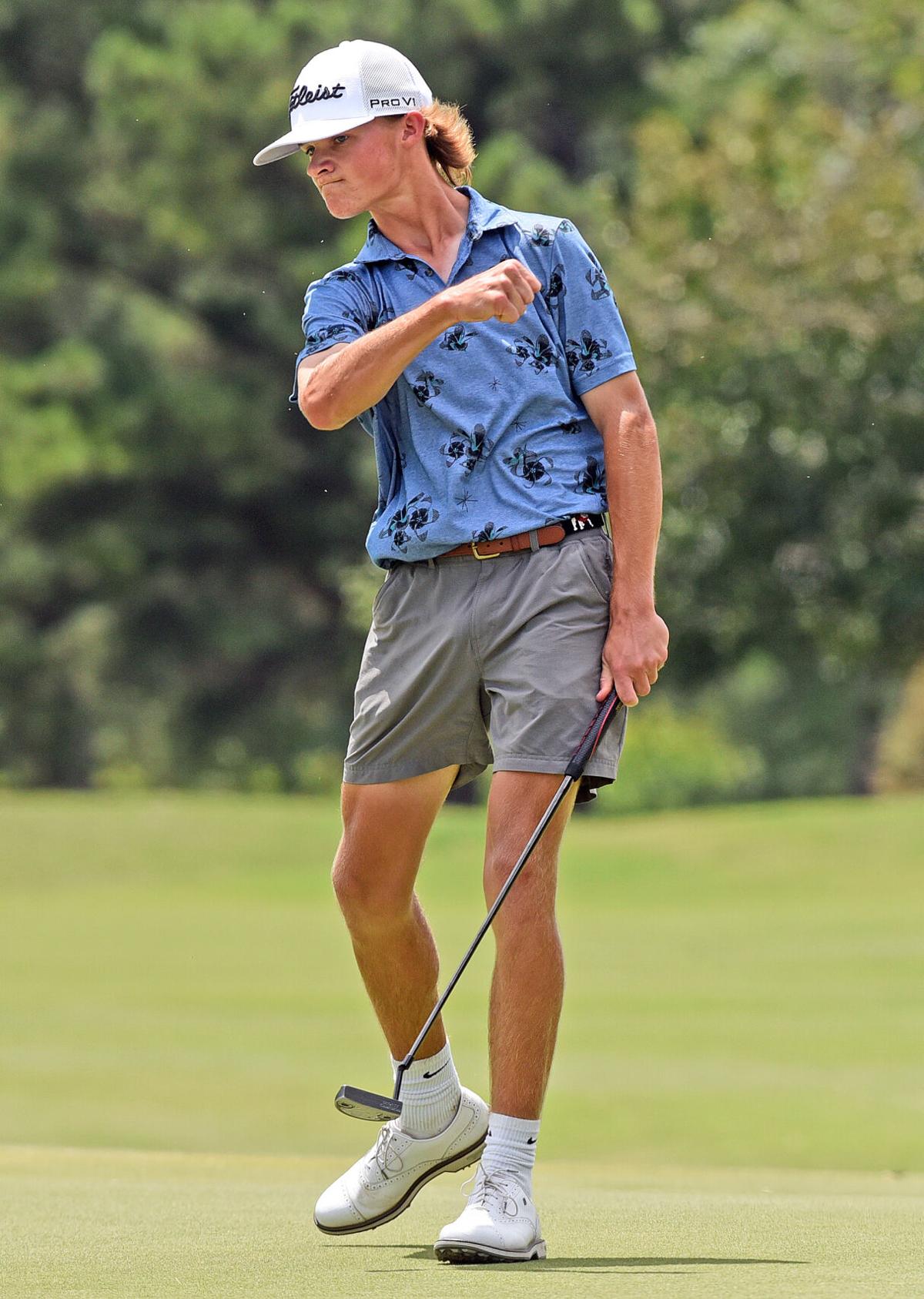 Carter Loflin reacts after sinking a putt on the 18th hole to force a playoff during the final round of the Future Masters on Saturday. 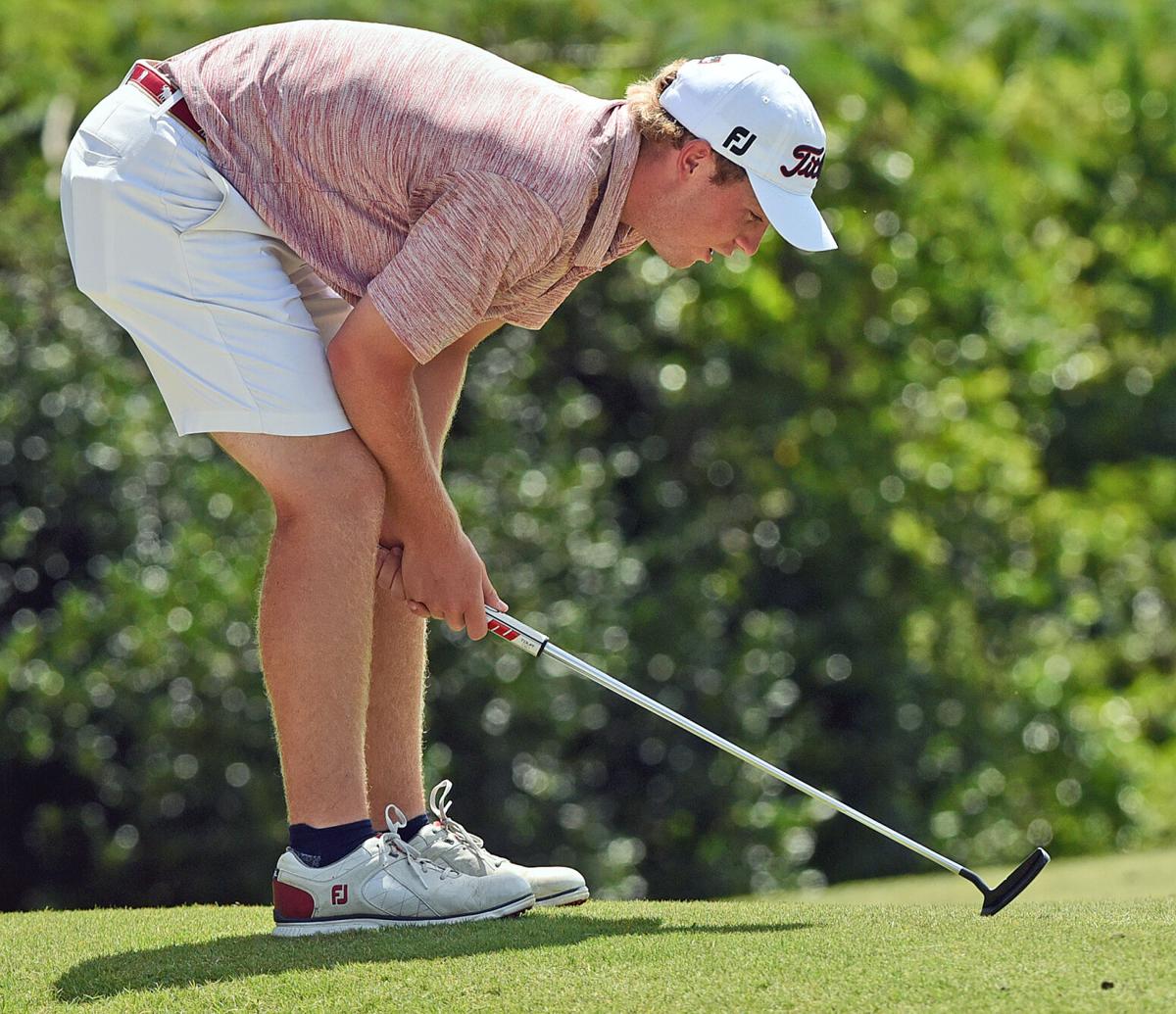 Jones Free reacts to lipping out a putt on the 14th hole during a playoff with Carter Loflin in the final round of the Future Masters on Saturday. 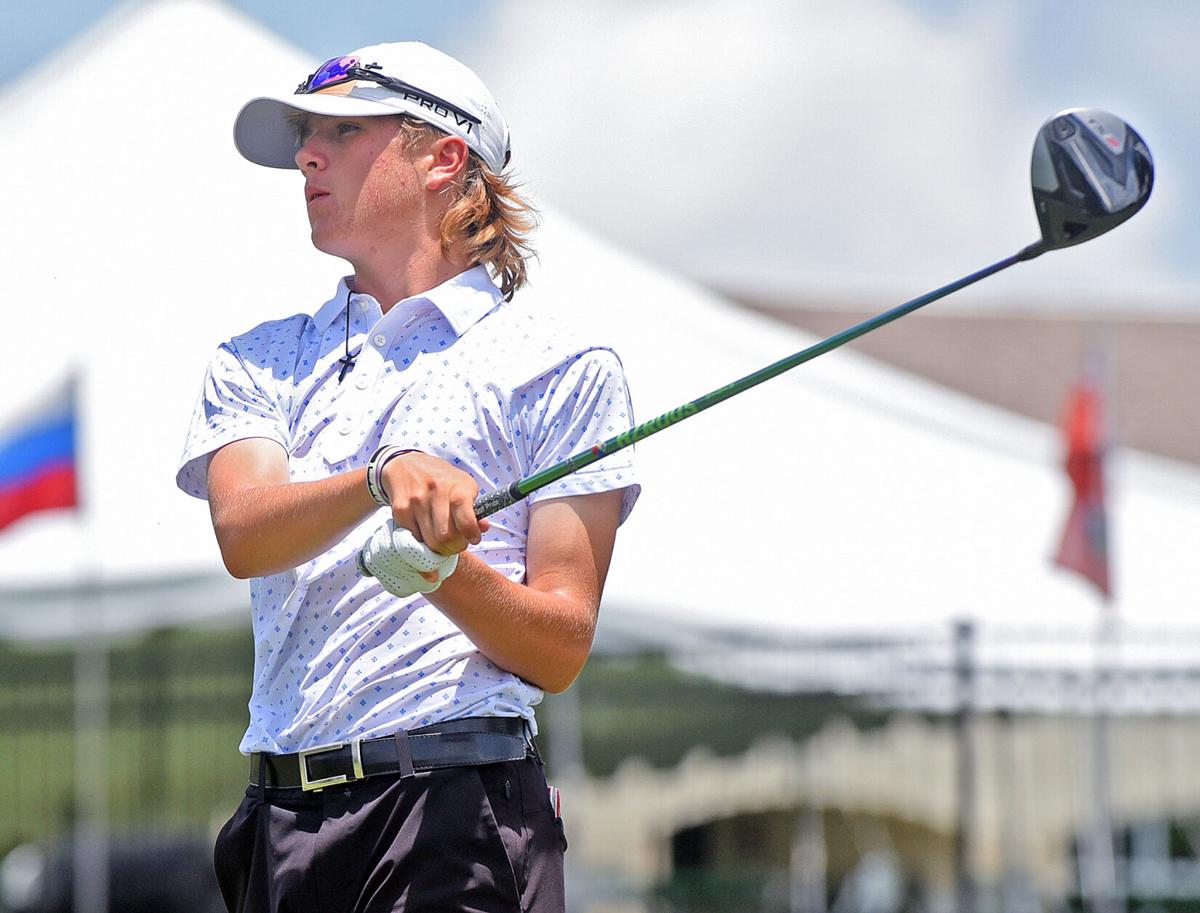 Camden Smith watches his tee shot on the 14th hole during the final round of the Future Masters on Saturday. 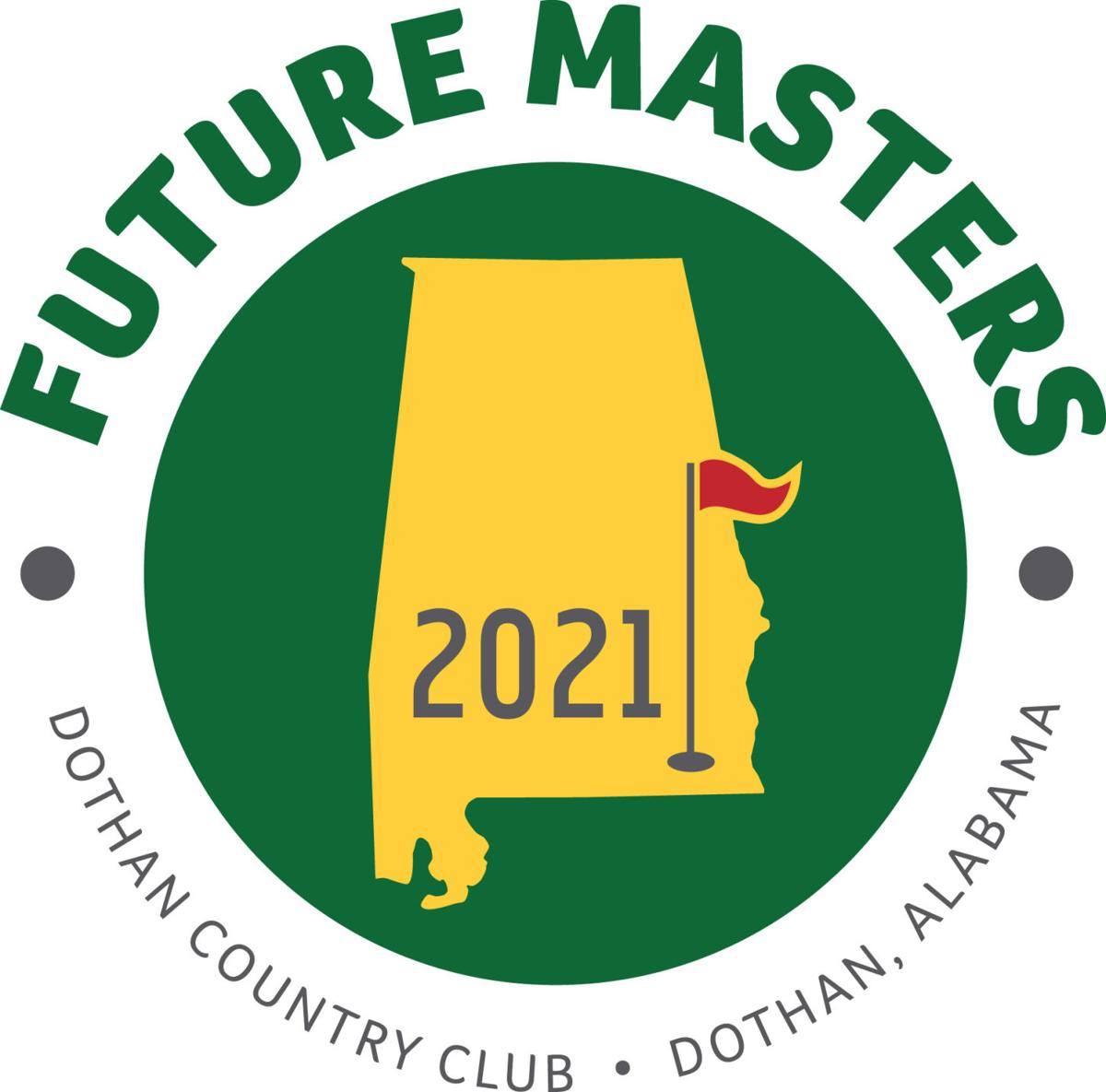 It came down to a battle of the last two Press Thornton Future Masters champions in a sudden-death playoff.

Defending champion Carter Loflin of Duluth, Ga., had drained an 18-footer on No. 18 to send it into extra holes against Jones Free of Selma, a University of Alabama signee who won the tourney two years ago.

Two holes into the playoff, on hole No. 14, Loflin dropped a 5-foot birdie putt to win just after a long putt off the fringe by Free lipped out.

The Loflin and Cink families are close friends, making the feat that much more special for Loflin, a University of Georgia commit.

“It means a lot,” Loflin said of sharing such a feat with Cink. “It’s pretty cool to kind of repeat it after him. He’s always been a real good mentor for me, so it means a lot for sure.”

Loflin and Free were two strokes back of Camden Smith of Windermere, Fla., to begin the round. Free took a 1-stroke lead with four holes left to set up the showdown at the end.

After Loflin and Free each made par on the first playoff hole, No. 18, the two went to No. 14 for what would be the eventual deciding hole.

Free went right into the rough on a bank with his tee shot, while Loflin went straight down the middle of the fairway. Free’s second shot went just short of the green on the fringe, while Loflin hit a beautiful shot just above the hole.

Free’s putt from the fringe hit the cup and spun out.

“I read it perfect,” Free said. “I guess I could have hit it a little bit harder and it might have gone in. I can’t complain. It was a good putt. The approach shot wasn’t what I wanted.”

Loflin knew he was fortunate that Free’s putt didn’t drop.

“He was probably about 5 or 6 feet off the green putting through some grainy fringe, but he hit a great putt and it looked like it was going to go in forever,” Loflin said. “It had a pretty bad lip out.”

It left Loflin with a short downhill putt for birdie to win it.

“I put it in a good spot,” Loflin said. “I was a little bit above the hole, but I had a pretty straight putt. I was like, ‘If I can just put a good stroke on this it should go in.’”

Loflin’s birdie putt on the final hole of regulation was more remarkable. His shot onto the green was far short of the pin, which was on the top right side of the green.

“It was a little bit farther than I would have wanted,” Loflin said. “I have really been working hard on left to right putts, so I kind of liked that one a little bit because I’ve been struggling with them recently.

“I knew it was going to break a bunch at the end and it just kind of waited forever to do it. Finally, it just started turning right and dropped.”

Smith, a 17-year-old who was playing in his first Future Masters, missed two birdie opportunities that could have gotten him into the playoff. He finished just a stroke back at 207 (68-69-70).

Down a stroke going to 18, Smith had a great shot onto the green with the ball stopping about 8 feet below the hole. His putt for birdie was just short.

“You’ve just got to get it to the hole on the last one and I didn’t,” Smith said. “I was a little nervous and a little tight and left it short. I’m happy with my play. It sucks not to pull off the win, but that’s golf.”

Smith had another birdie try on 16 that hit the flag stick.

“I hit a really good 8-iron in there from 160 and left it just below the hole,” Smith said. “I hit a great putt and it was traveling a little too fast and hit the flag stick and bounced out. That one stings, but I knew I had two more opportunities coming in and it hurts not to capitalize on it.”

Free made clutch par putts on 16 and 17 to remain in front by a stroke until Loflin tied it on the final hole.

He showed good composure down the stretch.

“You’ve always got to have the same mentality no matter what, whether you’re putting for par or birdie, whether you’re up or down, you’ve got to keep grinding,” Free said. “That’s what junior golf is pretty much about, in my opinion.”

Loflin felt fortunate to overcome Free for the title.

“He’s a great kid and a tough competitor who doesn’t make many mistakes,” Lolfin said. “I didn’t think I was going to be able to catch him.”

He believes winning a year ago helped.

“If anything, it kind of took some stress off me because I was thinking I’ve done this before,” Loflin said.

Tristin Wisener of Hartselle finished fourth at 209 after firing a final round 68. Trace Bracknell of Tuscaloosa and Paul Bruce of Guntersville each came in at 210. Connor Macmillan of Canton, Ga., Zach Adams of Charleston, S.C., and Collins Adams of Charlotte, N.C., each finished at 211. John Bruce of Guntersville, Will Jones of Alpharetta, Ga., and Harrison Sims of Homewood came in at 212.

Duane Mock is in the record book as an American qualifier for a U.S. Olympic Bobsled team and as Lakeside School’s winningest football coach b…

GENEVA – Geneva held on for an exciting 26-25 victory over rival Geneva County on Friday night in high school football action.

Ron Watson played on the court as a student, coached on it for 16 seasons and watched his three daughters – Sara, Hanna and Rachel – take part…

Charles Henderson falls on the road at Williamson

Charles Henderson hung tough with Class 4A No. 6 Williamson for a half, but the Lions roared away in the second half to a 39-22 win at Mobile’…

The halfway point of the schedule has hit for high school football teams in the ASHAA, which means a non-region week.

Carter Loflin reacts after sinking a putt on the 18th hole to force a playoff during the final round of the Future Masters on Saturday.

Jones Free reacts to lipping out a putt on the 14th hole during a playoff with Carter Loflin in the final round of the Future Masters on Saturday.

Camden Smith watches his tee shot on the 14th hole during the final round of the Future Masters on Saturday.