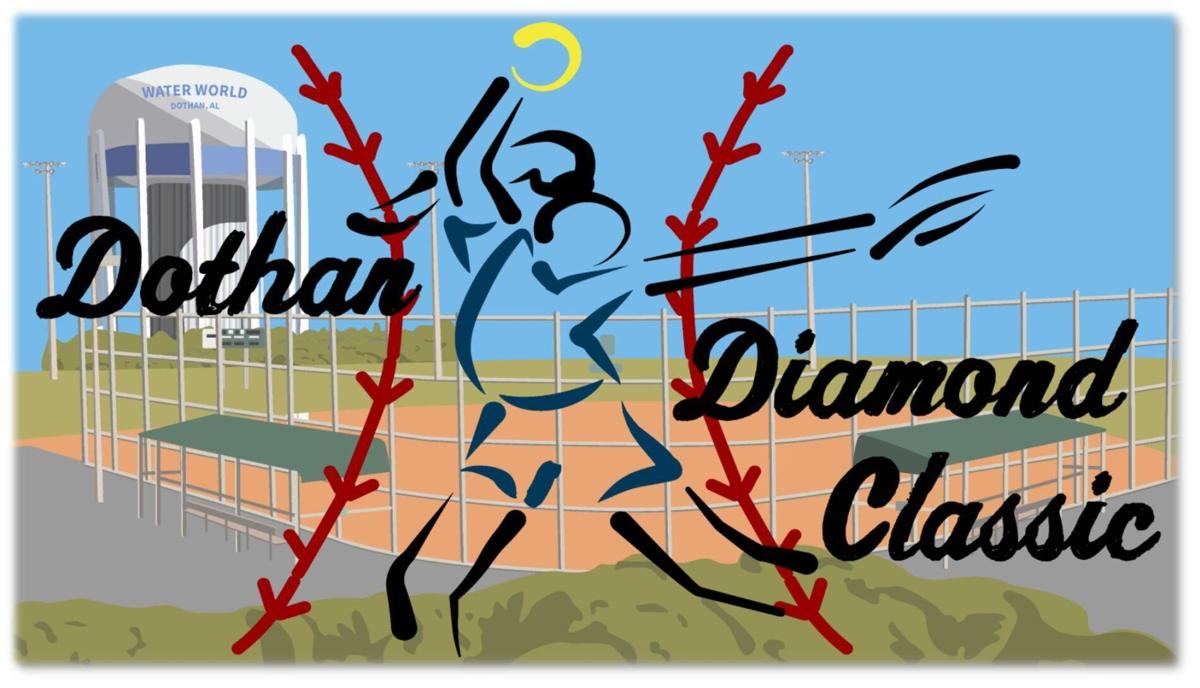 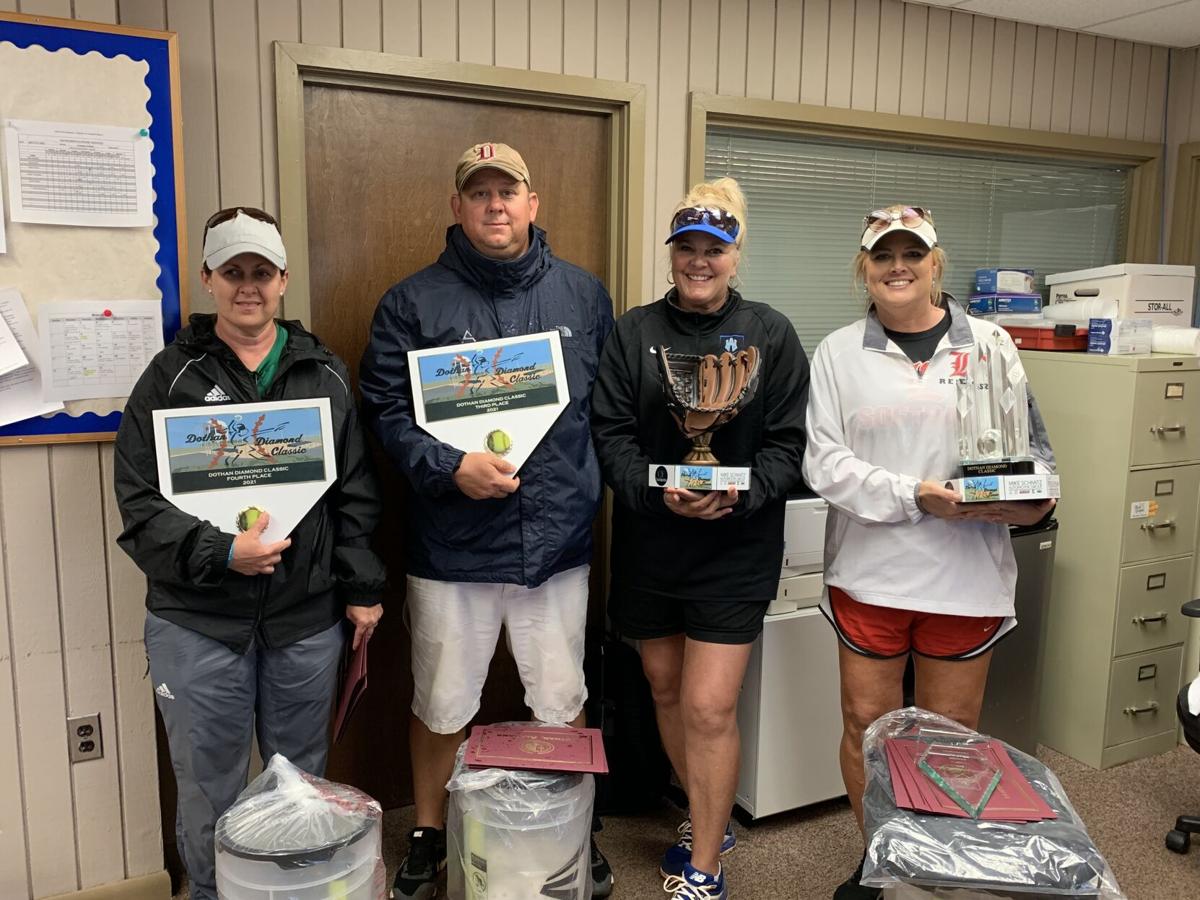 With the postseason starting in less than three weeks, G.W. Long head softball coach Nikki Long hopes her Rebel team is beginning to hit its stride.

The Class 2A No. 3 state-ranked Rebels (19-2) created momentum toward the postseason with a title Saturday at the Dothan Diamond Classic at the Westgate Softball Complex.

Also halted was a consolation game between Dothan and Brantley. The Wolves led 3-2 in the second inning when play was stopped. Both teams finished the tournament with 4-1 records and Dothan was declared the third-place finisher off a tiebreaker of fewest runs allowed in the tourney.

G.W. Long won all five of its tournament games, including a 10-0 semifinal win over Class 1A No. 1 ranked Brantley. The Rebels, behind pitcher Morgan Ferguson, allowed only six runs over five games. Ferguson, Long’s only senior, struck out 38 batters and allowed only 15 hits over 27 innings. She was named the tournament MVP.

“It was a big tournament for us and for Morgan to be able to pitch through some of the things she did and the adversity she faced,” Rebel coach Nikki Long said. “It should give us some confidence going into the playoffs.”

Houston Academy (29-4) went 4-1 in finishing runner-up. The Class 3A No. 3 ranked Raiders reached the finals with an 8-6 eight-inning semifinal win over Dothan, overcoming a 4-0 deficit.

“It was a great opportunity to get to play in this tournament, hone our skills and be in those pressure situations and to come from (four) runs behind for a win,” Houston Academy coach Sharon Cherry said. “I think it helps our kids grow a lot.”

Both Long and HA scored a run in the first inning before the championship was called. Maleah Long had a run-scoring single for G.W. Long in the top half, driving in her older sister Makenna. Emily Maddox singled home Alexis Milanowski in the bottom half for Houston Academy.

The Rebels earned a hit with two outs in the top of the second, but Milanowski, HA’s pitcher, got a fly out to end the inning as rain continued to increase.

Houston Academy’s Lizzy Kate Skinner was about to step in the batters’ box to start the bottom of the second when lightning was detected, forcing action to be stopped. Moments later hard rains hit the complex, forcing officials to call the tournament at that juncture.

Long hit five home runs, including two each by Whitehead and Makenna Long. Ferguson added the other home run. Ferguson’s homer was a two-run blast as was the second one by Makenna Long. The other three were solo shots.

Ferguson, meanwhile, struck out 12 in a seven-inning complete game performance. She allowed only two hits and one walk.

Houston Academy 8, Dothan 6: Houston Academy’s Emily Maddox delivered a go-ahead two-run single in the top of the eighth and the Raiders held off a Dothan threat to win a back-and-forth semifinal game.

Dothan, behind a run-scoring single by Andrea Harris and a RBI double by Natalie Turner in the first inning, led 2-0 before extending the margin to 4-0 on a fifth-inning two-run double by Collier Peaden.

Houston Academy cut the margin to 4-3 in the top of the sixth on a three-run homer by Maddox, who had two hits and five runs batted in the game. Dothan eased out to a two-run lead on a Natalie Turner solo homer in the bottom half.

The Wolves were one out away from the win after getting two quick outs in the top of the seventh, but Tylaya Lingo singled and Smith doubled to keep HA alive.

Milanowski then hit a grounder to the third baseman for what appeared to be a potential game-ending out, but the throw to first was wide to the home plate side past the first baseman, allowing Milanowski to reach and both runners to score to tie the game at 5-5.

Beachum singled to score Milanowski from second to put HA up, but Maddie Anners’ solo homer tied it up at 6-6 for Dothan in the bottom half.

With the international tiebreak applied in extra innings, Beachum was placed at second base to start the HA eighth before being replaced by pinch runner Harmoni Descalzi. Mattie Havas singled to move Descalzi to third. Havas then stole second and Maddox brought home both runners on a single, putting HA up 8-6.

Dothan had runners at first and second base with one out in the bottom half, but Milanowski got a fly out and strikeout to end the game.

Havas added two hits to go with Maddox’s output for the Raiders.

Natalie Turner had three hits and two RBI for the Wolves, while Peaden, Harris and Terrell had two hits each.

Dothan 4, Geneva 3: Dothan rallied from a 3-1 deficit with two runs in the fifth to tie the game before winning it in the sixth on a Collier Peaden walk-off hit.

Peaden and Natalie Turner both had two hits and a RBI for Dothan. Rayleigh Thagard added a hit and RBI.

Madison Johnson was 3-for-4 with a triple and Makaley Boswell belted a two-run homer for Geneva. Pazley Lamb added a single and RBI.

G.W. Long 2, Rehobeth 0: Morgan Ferguson struck out 13 in a three-hit, seven-inning shutout and Makayla Phillips and Maleah Long had run-scoring hits for the only offense in the game.

Phillips had two hits, one a double, for G.W. Long and Makenna Long had two singles.

Jaci Parker had two hits for Rehobeth, including a double.

Ansleigh Smith had two hits for HA. Emily Maddox had a two-run single and Milanowski, Jaysoni Beachum and Caley Caldwell had a hit and RBI each. Caldwell had a triple for her hit, while Beachum had a double as did Mary Suzan Aman.

Kylie Barnes and Ella Grace Kelly had a single each for Wicksburg.

Dothan 4, Enterprise 1: Natalie Turner hit a three-run homer in the third and twin sister Nicole Turner made it hold up, allowing just a run on seven hits with four strikeouts in a complete-game effort.

Natalie Turner and Rayleigh Thagard both had two hits for DHS. Nicole Turner drove in the Wolves’ other run on a ground out. Maddie Anners had a double.

Emma Faulk hit a solo homer to account of the Enterprise run. Georgia Lessman added a double among the seven Wildcat hits.

G.W. Long 3, Dale County 2: Dale County struck with two runs in the first, but G.W. Long scored three in the third and pitcher Morgan Ferguson made the advantage stand for a 3-2 win.

In Long’s third, Mollie Munn, who singled to open the inning, scored on an error during Emmaline Hughes’ grounder. Hughes, at third after the error, scored on an Ally Whitehead sacrifice fly. Makenna Long followed with a solo homer.

Gracie Suggs had a RBI single to score Shelby Allen and Suggs later scored on a wild pitch for Dale County.

Houston Academy 4, Slocomb 1: Houston Academy scored all four of its runs in the first inning and pitcher Alexis Milanowski allowed only two hits and a run over five innings with five strikeouts in the Raider win.

Mattie Havas and Emily Maddox hit back-to-back homers for HA in the four-run first. Jaysoni Beachum also drove in a run. Mary Suzan Aman and Ansleigh Smith had a single each for the other HA hits.

Gracie Ward provided the Slocomb offense with a solo homer. Gracen Hodges added a single for the other hit.

Chloe Joyner and Kelsey Ellenburg both had three hits with Joyner, who had a double, driving in two runs and Ellenburg one run. Abbie Ellenburg added a double and RBI.

Brooke Delvecchio had a single for the lone Cottonwood hit.

Brantley 13, Ashford 0: Kendall Navarre struck out 12 and pitched a six-inning, three-hit shutout, while also going 3-for-4 with two RBI on offense to lead Brantley.

Mary Driggers earned two hits, one a triple, and drove in four runs and Elleigh Layton had two hits off a solo homer and a double for Brantley. Campbell Hawthorne and Lauren Hudson both had two hits with one RBI and Manning Fox added a hit and RBI.

RaeLeigh Jordan had all three Ashford hits, one a double.

G.W. Long has turned to a veteran assistant coach with plenty of championship coaching game experience as its new head football coach.

Three insurance runs in the sixth inning proved to be crucial as Providence Christian held on for dear life to beat T.R. Miller 8-6 in the qua…

Ariton’s basketball programs will have a new look next season.

Houston Academy and Elba were at the top of the leader board in their classification, Enterprise was in second place and three local individua…