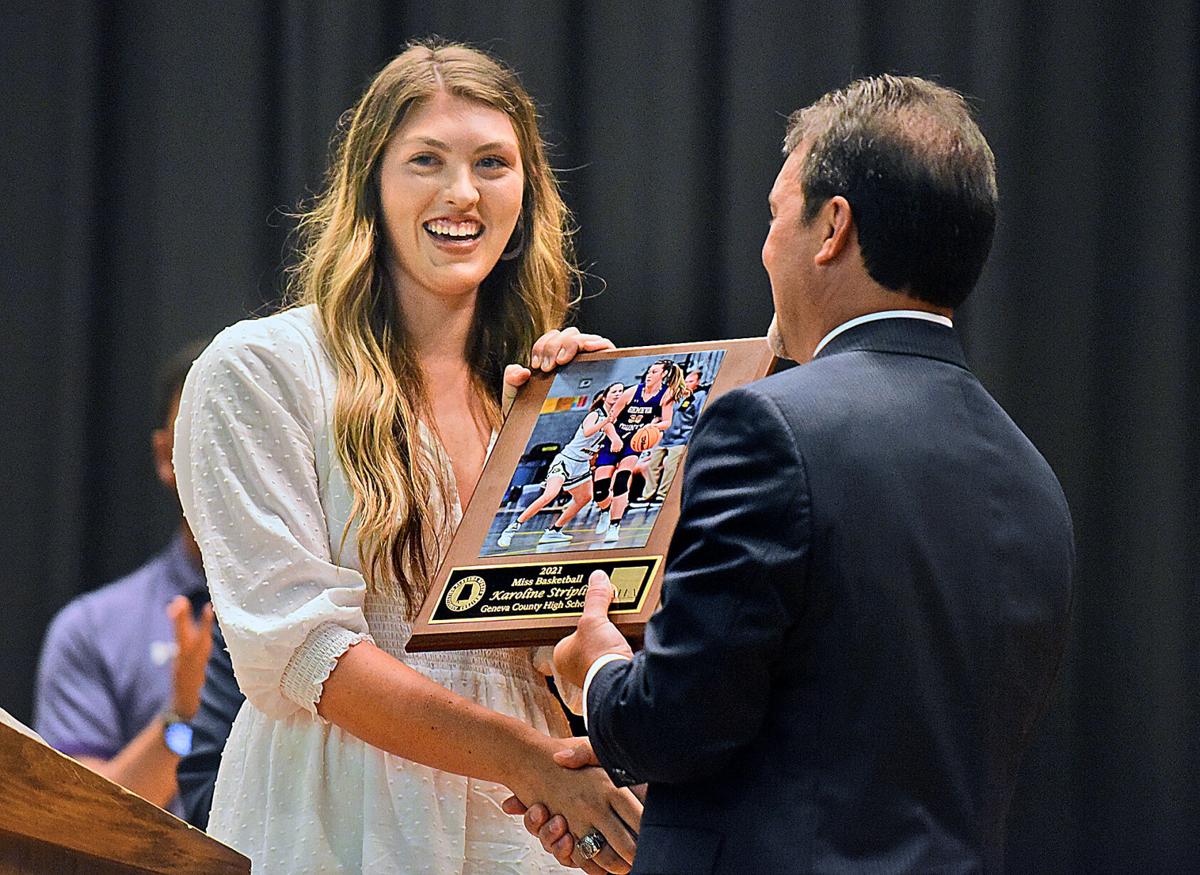 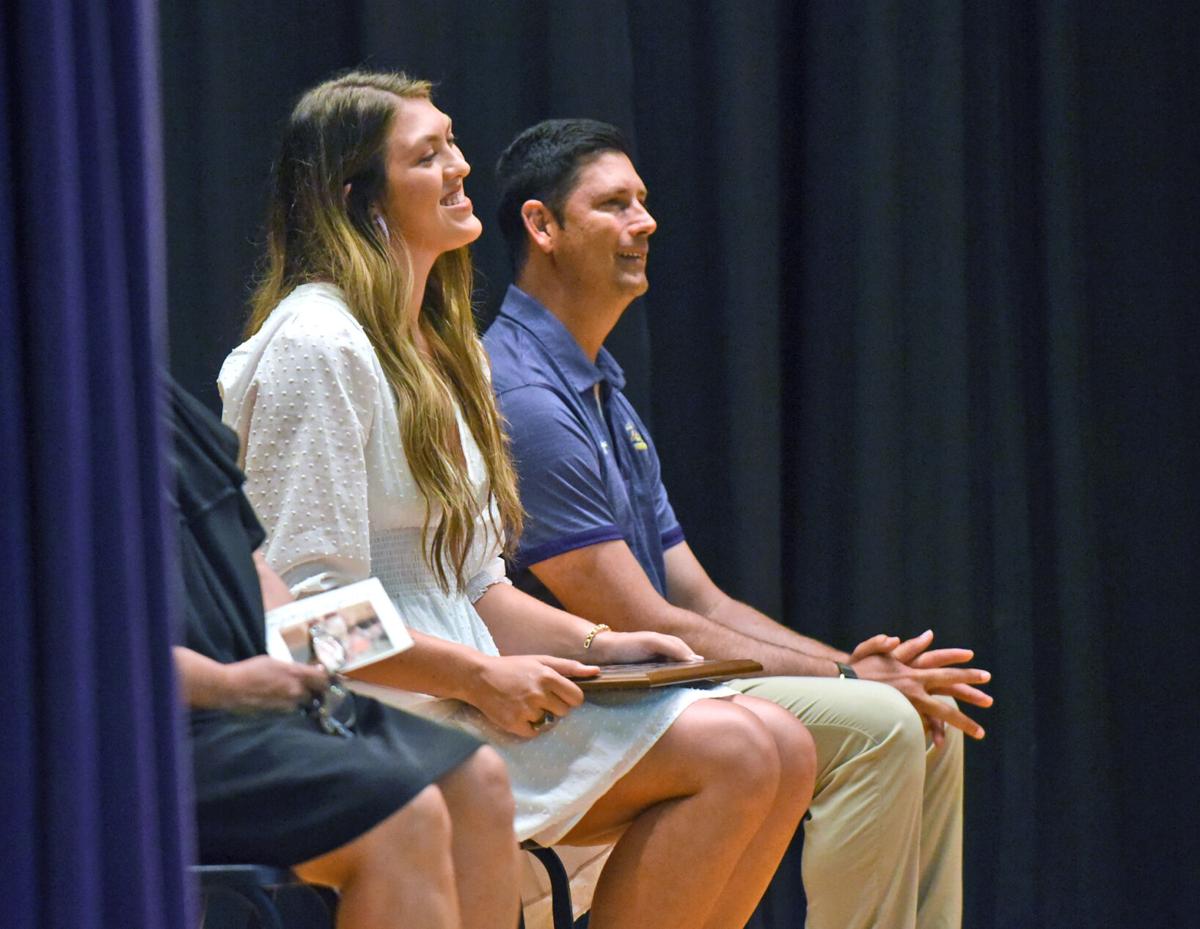 2021 Alabama Miss Basketball Karoline Striplin and her father Jimbob listen to a speaker during a plaque presentation at Geneva County High School on Tuesday.

As she sat on the stage in the Geneva County High School auditorium in a white dress flanked by her dad JimBob to her left and Geneva County Superintendent Becky Birdsong on her right, Karoline Striplin listened to guest speakers at the podium talk about her basketball skills and her as a person.

She began to get a little emotional, but quickly hid it.

A few minutes later, she was called to the podium by Alabama Sports Writers Association representative Ben Thomas and Alfa agent Ken Olive.

At that moment, Thomas handed a plaque to Olive, who then presented Striplin with the state’s Miss Basketball Award for the 2020-21 season.

Striplin, Geneva County’s standout senior, was named the winner of the state’s top high school basketball award for girls basketball last month in voting by ASWA members. The award is sponsored by Alfa.

On Tuesday, the ASWA and Alfa presented the award to Striplin.

“It is just awesome,” Striplin said of officially receiving the award along with her Class 2A Player of the Year award. “I can’t put it into words. I am so incredibly thankful and grateful. It is a great experience.”

The 6-foot-3 Striplin, a versatile player who played guard, forward and center during the season, averaged 26.8 points, 16.8 rebounds, 6.2 blocks, 5.6 assists and 4.2 steals a game in helping the Lady Dawgs to a 20-7 record and to the Class 2A regional tournament. She also earned 10 triple-doubles, one quadruple-double plus a handful of double-doubles out of 25 games played (two games were forfeited by opponents).

Striplin, who has signed to play college basketball at the University of Tennessee, is just the second Wiregrass player among the 34 overall winners to be honored with the coveted award. Eufaula’s Gwen Jackson was the winner in 1998.

“I am just overwhelmed with gratitude and honored,” Striplin said.

During her acceptance speech, she thanked the AHSAA, the Alabama Sports Writers Association, Alfa, Geneva County school administrators and her coaches, both at Geneva County and with her AAU team, the Alabama Southern Starz, as well those in the community plus those in attendance, including local media. She especially thanked her family and mainly her parents and coaches, Karie and JimBob Striplin.

She concluded, “Thank you to my friends and family and everyone for being here today. I couldn’t be more excited and all the glory goes to God,” Striplin said.

She wasn’t the only one emotional during Tuesday ceremony.

Her mom and head coach Karie Striplin was seen with misty eyes, while her dad/assistant coach JimBob Striplin listened attentively as his daughter received the award.

“The thing that was so special was hearing what other people had to say about her and how hard she has worked and seeing it payoff is really rewarding as a parent,” Karie Striplin.

“I got to sit there as a parent and watch and just take it all in. It was real special to see the prestige of the Alabama High School Athletic Association, the Alabama Sports Writers Association and Alfa being here and presented her with an award.”

JimBob Striplin had a similar feeling.

“Really surreal,” Striplin said. “You hope your kid wants to participate in sports when she is a small child and to see her not only participate but excel and then be given the greatest (high school) honor in her sport is real miracle and a proud dad moment.

“I felt like she had earned it and that she belonged there. I was proud of her and the way she carried herself. Not only is she a great basketball player, but the thing I love the most about her is that she is a great kid.”

The newest Miss Basketball winner admitted she got emotional some during the ceremony, especially when hearing words from Lee. The AHSAA representative recounted a conversation he had with Mike Chase, who coached Striplin during the Alabama-Mississippi All-Star game in March. The Geneva County star was the game MVP in helping the state to a 102-70 win.

“This is a direct quote,” Lee said. “He (Chase) said, ‘She was always locked in. No matter what the situation was, she was always had great body language and looked me in the eye and nodded her head with understanding and approval. She always accepted coaching. When the person decides that they want to learn, the teaching is easy.”

Lee later added, “Coach Chase said ‘I truly believe I could have told her to go play with one hand behind her back and she would have done it.’”

Lee also spoke to Striplin’s fellow students assembled in the back of the auditorium.

“For the students in the back, I want to say to you that today you may not realize it, but one day you will look back and you will realize that you had the opportunity to watch one of the greatest girls basketball players to play in this state. You will look back and be full of pride for the fact that you went to school with her.”

Striplin admitted the words hit home to her as she finishes her career at the school.

“Jamie Lee’s speech really got me,” Striplin said. “I started crying. I was hoping I wouldn’t cry my eyes out when I was doing my speech. I am just so thankful and just overwhelmed with gratitude.”

Striplin now focuses on her future career. She graduates from Geneva County on May 24. Six days later, she has to report to Tennessee.

“I am in full workout mode right now,” Striplin said.

Her biggest emphasis for now is getting physically stronger.

“I know there are going to be a lot of bruises in the SEC in who I am going to go up against, so getting stronger (is important) so I can hold my own,” Striplin said.

Rehobeth’s softball team won a pair of three-inning games off no-hitters in winning the Class 5A, Area 3 Tournament title with 16-0 and 22-0 r…

2021 Alabama Miss Basketball Karoline Striplin and her father Jimbob listen to a speaker during a plaque presentation at Geneva County High School on Tuesday.