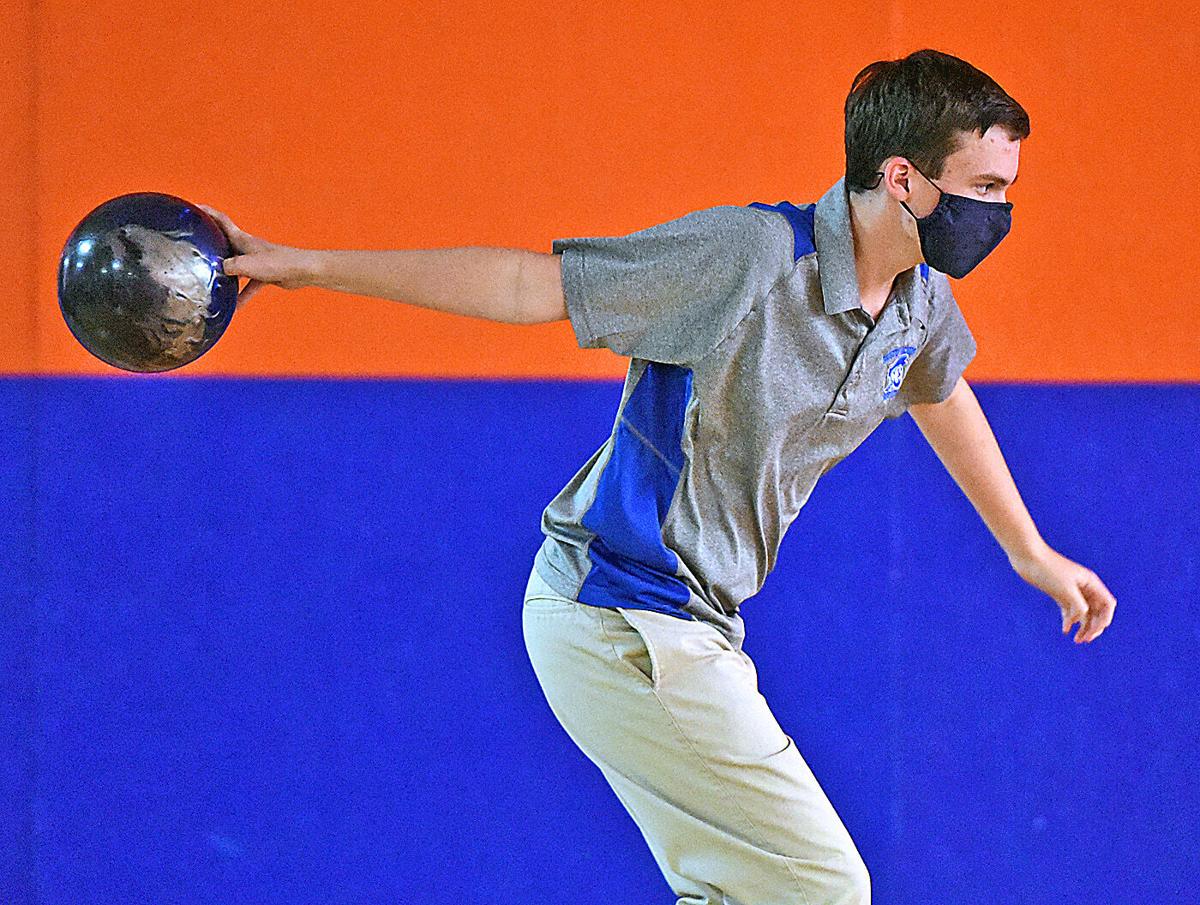 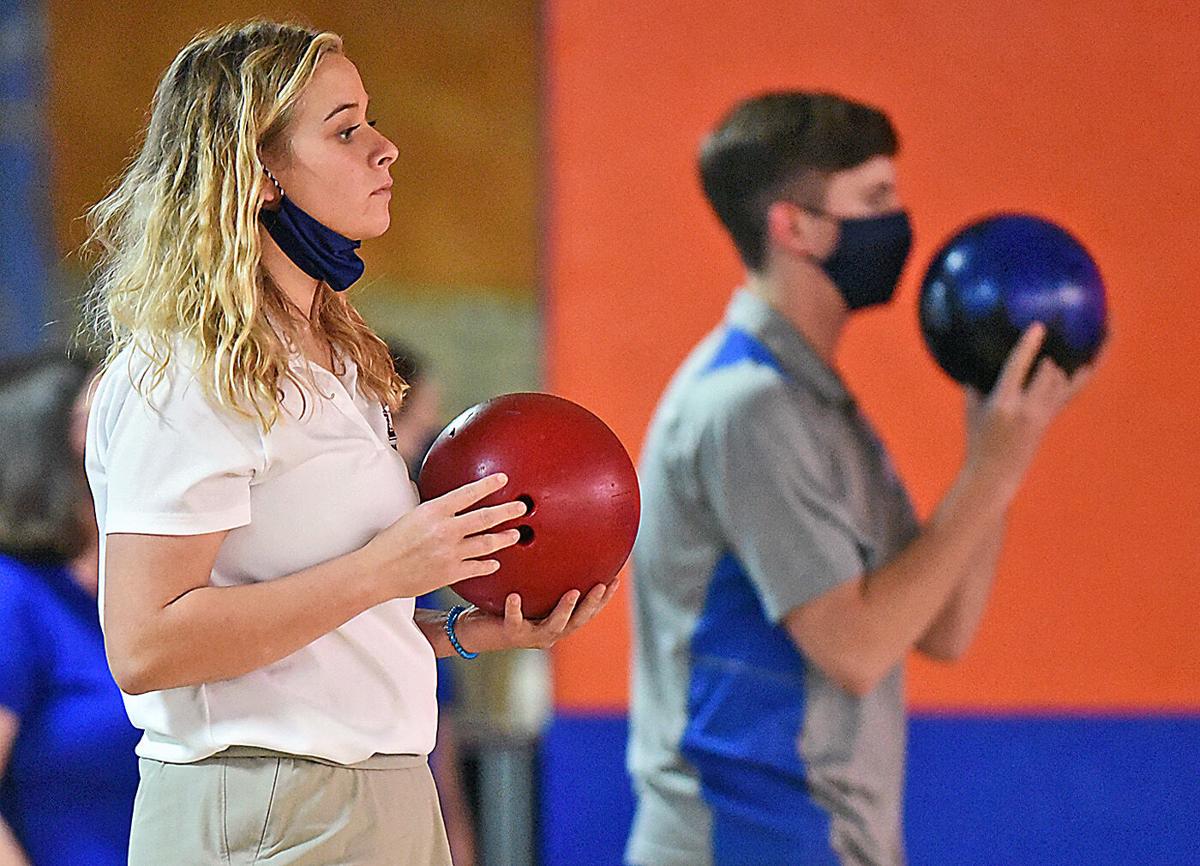 Slocomb's Maggie Hales concetrates on her next roll during a bowling match against Houston Academy at Dothan Lanes on Thursday night.

The Houston Academy girls bowling team clinched a third straight trip to the postseason on Thursday.

The Raider boys, meanwhile, kept their postseason hopes alive and now seek major help to create a tie for a potential winning tiebreaker to a postseason spot.

The teams put themselves in those scenarios Thursday by winning a tri-match at Dothan Lanes over Slocomb and Pike Road in Class 1A-5A, Region 2 action.

The HA girls led virtually from start to finish in rolling to a solid win over the RedTops and Patriots, finishing with a 1,054 score to Slocomb’s 908 and Pike Road’s 835.

The Raider boys also got off to a strong start, but had to hold off surging Slocomb in the final Baker game to earn a 35-pin win over the RedTops, 1,114 to 1,081. Pike Road, coached by former Houston County head football coach and former Dothan assistant football coach Mike Atkins, finished third with a 960.

With their win, the HA girls finished region action with a 6-2 record, runner-up to Beauregard (6-1 with one match left). The two top teams advance to the regional Jan. 22 in Spanish Fort. Slocomb is right outside the top two with a 4-3 record and one match remaining with Pike Road (0-5) remaining.

On the boys side, Houston Academy improved its record to 5-3 in region play, but needs winless Pike Road (0-5) to beat Beauregard (5-2) to force a tie for second behind region winner Marbury. If the Patriots pull off the major upset, HA wins the spot based off a tiebreaker of pin differential over Beauregard.

The Slocomb boys earned its first region win of the season by finishing ahead of Pike Road.

Behind good balance, the Houston Academy girls took command of the tri-match during the opening traditional games. The Raiders finished with a 692 total to Slocomb’s 616 and Pike Road’s 493.

Marley Conner paced the HA effort with a 153 and Leanne Potter followed closely behind with a 150. Kaelyn Tolley and Lucy Jeffcoat weren’t far behind with a 139 and 138, respectively.

“They were very consistent tonight,” HA girls coach Natalie Jeffcoat said. “They practiced hard for this meet and we had a great turnout with the consistency.”

The Raiders continued to pull away from their nearest competitor, Slocomb, during the first two Baker games, winning the first one 124-88 to extend the margin to 816 to 704. Pike Road bowled a 150, but was still well behind the two leaders at 643. HA outbowled both in the second Baker, earning a 130 to Slocomb’s 93 and Pike Road’s 104.

The third Baker game was mostly a formality with Slocomb scoring a 111 to HA’s 108 and Pike Road’s 88.

Jeffcoat, the coach, said reaching the regional tournament was an accomplishment for HA girls. She credited the leadership of seniors Lucy Jeffcoat, Potter, Victoria Osunsanya and Fatima Ghori and junior Abby Curtiss in helping the Raiders achieve the feat.

“We had four seniors and two were returning (from last year) so they were strong, but we also had Marley Conner, a junior, who stepped up to roll a career high and a school record 203 (a couple matches ago). We also have Kaelyn Tolley, a sophomore, who is a strong bowler and we have Ananya Reddy step up as a freshman. This was their goal – to get to the regional.”

The Houston Academy boys also had a strong start Thursday, knocking down 729 pins in the traditional round to seize a 61-pin lead over Slocomb, which had a 668. Pike Road was at 646.

HA struggled early in the third and final Baker game, but strikes by Cooper Andrews and Jackson Byrd followed by a 9 rolled by Luke Thompson in the last three bowls helped the Raiders hold on for the 35-pin win.

“They came out pretty good at the beginning in the traditional game,” Houston Academy coach Jody Ryan said of his boys team. “They were putting together a lot of marks (strikes) in the first two-three frames then kind of slimmed off in the middle, but picked it up again at the end of the traditional.

“We ended up over 700 and for us, anytime we finish traditional over 700 that is our mark. So we were able to do that and we had a little bit of cushion. Slocomb bowled well in the first Baker game and cut it from 61 to 40 and then in the second game to 23 but we held on in the last game.

“We had a couple of big strikes when we needed them and those made the difference – those two strikes – to hold on.”

Thompson and Andrews, two seniors, helped pace HA on the night. Thompson finished the traditional round with a 181 and Andrews had a 152. Both also had strong Baker performances.

“I was proud of the two seniors for the way they bowled,” Ryan said. “They are both one-year guys. Thompson has bowled well the whole year and Cooper in the last two-three matches has come on strong.”

Ian Kauffman also had a strong night for the Raiders, including a 156 in the traditional round.

The Slocomb boys were led by Kaleb Drake in the traditional with a 153. The girls were paced by Ava Wilson with a 175 and Graci Phillips with a 152.

Pike Road was led by Konner Reybitz on the boys side with a 170 and Kacey Reybitz in the girls with a 125.

Fresh off being hired, new Samson basketball coaches Jacob Nawlin and Josh Blalock have quickly gotten to work in their new roles.

As minister of Highland Home Church of Christ, Dean Kelly is used to leading the congregation and overseeing activities.

Rehobeth’s Brantley Scott set a couple of goals for his high school senior year on the golf course.

Slocomb's Maggie Hales concetrates on her next roll during a bowling match against Houston Academy at Dothan Lanes on Thursday night.