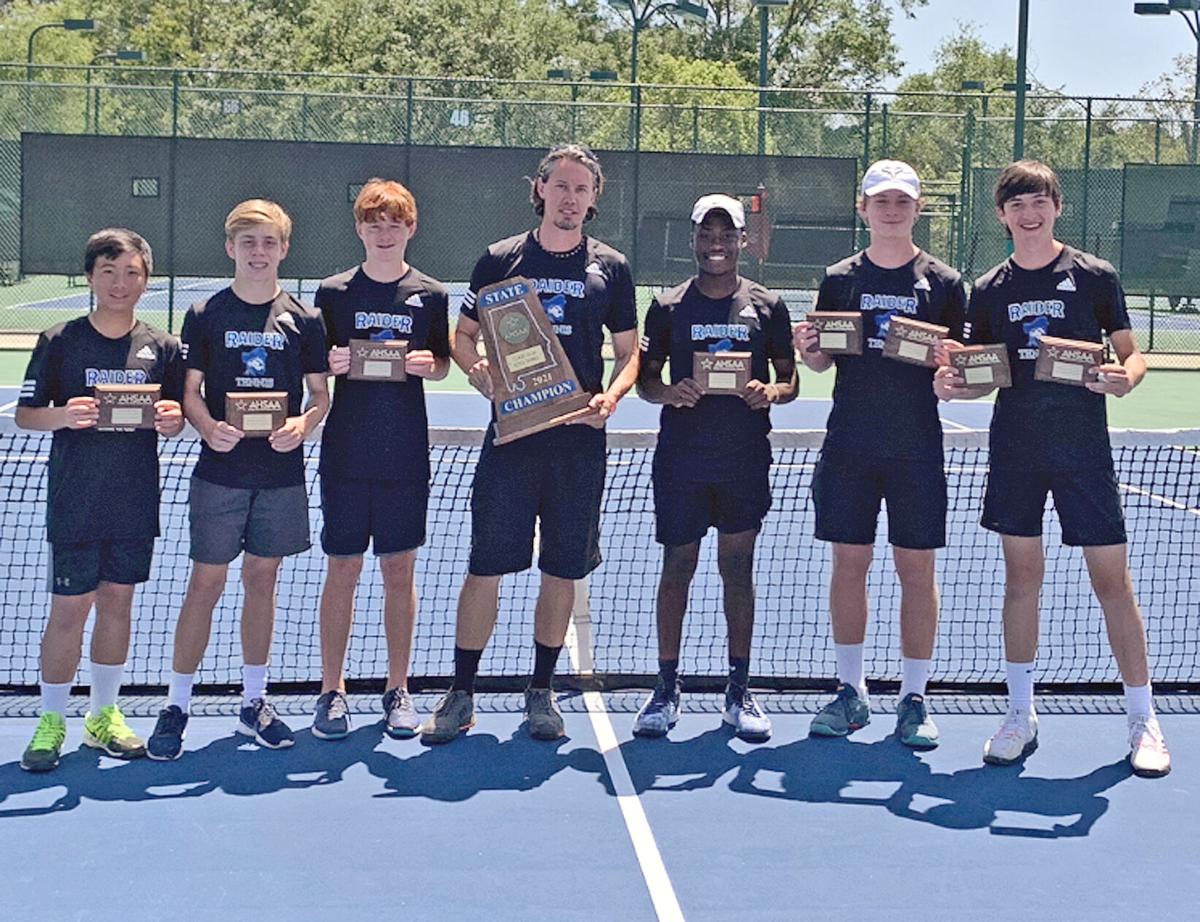 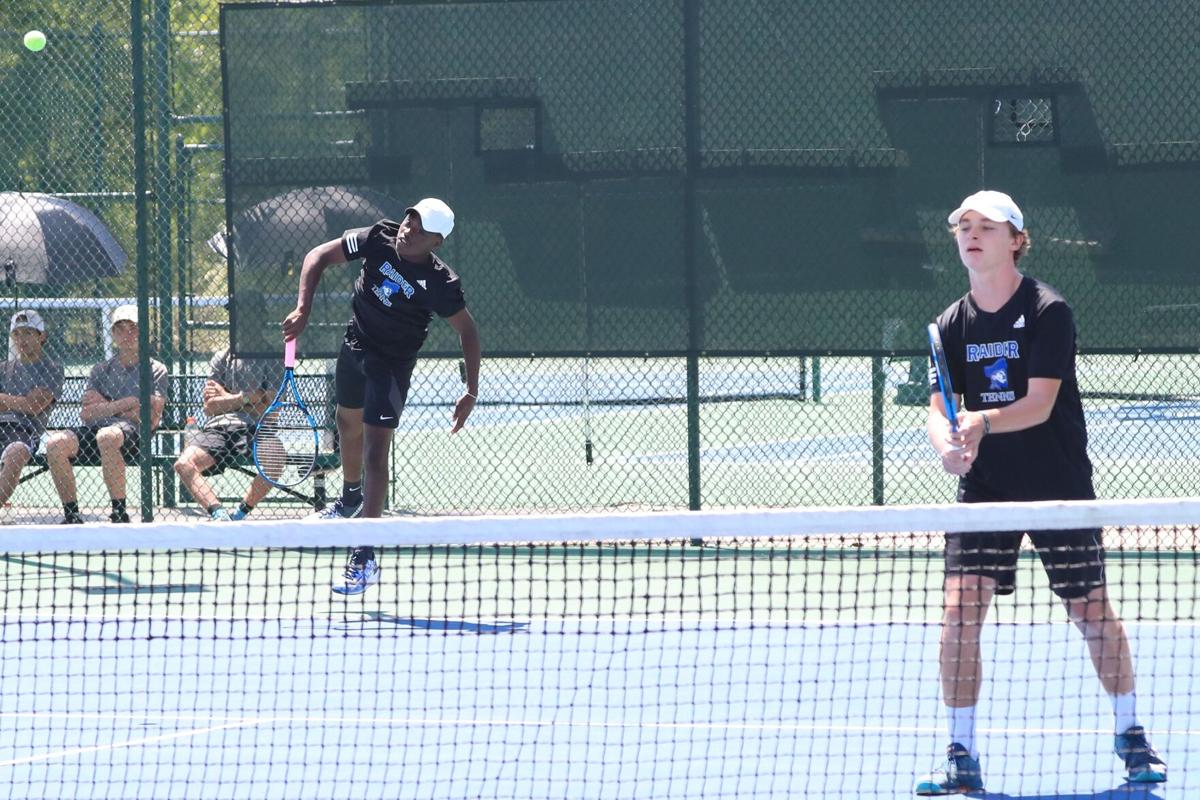 The Houston Academy Raider boys tennis team once again made its way to the top.

Unable to get a chance to defend its 2019 state title last spring because of the state-mandate stoppage of sports because of COVID-19, the Houston Academy boys defended that title in 2021, capturing the AHSAA Class 1A-3A state tennis crown Monday and Tuesday at the Mobile Tennis Center.

It’s the Raiders third straight state title, albeit over four years since no championships were held last year.

Behind two individual singles titles and three doubles crowns, HA pulled away to a convincing title at the two-day meet, racking up 53 points to Westminster of Oak Mountain’s second place total of 31.

Providence Christian, meanwhile, finished tied for third in the 1A-3A meet with Montgomery Catholic, the Eagles’ best AHSAA state finish in girls or boys tennis. Both PCS and Catholic had 19 points. The Eagles also had their first ever individual to win a state title during the week.

The Enterprise girls and boys tennis teams, meanwhile, competed at the Class 7A State Tournament in Montgomery, but both had one singles winner and finished in eighth place out of 10 teams.

Houston Academy dominated the 1A-3A championships despite its youth. The Raiders have no seniors and only one junior with the bulk of the team eighth and ninth graders.

“Even though we have had some success in recent years, this one is different because it was almost a completely different team,” HA coach Brian Hart said, noting only two players played at the state championships two years ago. “It is a whole new crop of kids. I have two freshmen and three eighth graders on this team, so it is pretty special to the boys. They were super amped up to do this. They put in a lot of hard work into it.”

All six Raider players won either a singles or a doubles title at the state meet.

Freshmen Mitchell Piedra and Brody Williams won individual titles at No. 1 and No. 3 singles. Piedra combined with Andrew Ayodeji to win the No. 1 doubles, while Williams and eighth grader Jason Mun won at No. 2 doubles. Wills McRae and Thomas Buntin, a pair of eighth graders, won at No. 3 doubles.

“It is pretty crazy,” Williams said of HA’s team title. “It still really hasn’t sunk in yet, but getting the awards and taking pictures with the team was worth it. That was my favorite part.”

Piedra, who along with Ayodeji contributed to the state title two years ago, also expressed excitement at the Raider title.

“It feels really good,” Piedra said. “It feels like our preparation really paid off.”

Williams felt off-season work in the summer was crucial in helping the Raiders hone their skills in time for the season.

“The key was practice over the off-season,” Williams said. “We have a clinic we go to run by Jody Perry that is every day in the summer and almost every member of the team did that over the summer. That contributed to the team success.”

Piedra said teamwork was also a key component to the Raider success.

“It was how we pumped each other up,” Piedra said. “We prepared for each match wonderfully and stuck with every person playing. We had great teamwork.”

The Raiders dominated Monday’s opening day when five of their six singles players advanced to the finals and all three doubles moved into the championship round.

“We essentially were almost perfect on the first day,” Hart said. “We only lost that one individual semifinal (at No. 2) and basically Catholic, Providence and Westminster all kind of beat up on each other so much that we built up a big-first place lead that nobody could catch us.

“We won it on the first day. I didn’t tell my parents and players this, but mathematically we clinched it yesterday (Monday). I didn’t want to tell them because I wanted them to keep fighting (on Tuesday).”

Piedra, who won the No. 6 singles title two years ago, won all three of his state matches, starting with a 6-2, 6-0 win over Decatur Heritage’s Michael Vandiver and a 6-3, 6-1 semifinal win over Montgomery Catholic’s Sebastian Sayegh. He beat Westminster’s Grant Eller 6-1, 6-4 in the championship.

“It had a lot to do with my focus,” Piedra said of how he won. “There were a bunch of crowds here cheering and a lot of distractions, but I was able to keep focus and win it.”

Williams overcame an unexpected obstacle to earn his title at No. 3 singles.

“The part I am most proud of is playing through a broken finger,” Williams said. “Mitchell tackled me in my (hotel) room on Sunday night the night before the first day and I was in the ER (emergency room) until 3 a.m. and played yesterday (Monday) with four hours of sleep. I came back today and won the whole thing so that is the highlight of the trip for me.”

The injury was to the middle finger on the left-hand for the right-handed hitting Williams.

“If there is a silver lining to that, it was definitely that it was my left hand (and not my right hand),” Williams said, adding it affected only his backhand shots but not his for forehand or serves. It also helped that he generally plays mostly up front in doubles where he doesn’t have to do a lot of backhand shots.

The injury wasn’t the only thing he overcame during the day, either. In the championship match against Decatur Heritage’s Michael Chang, he quickly fell in an early hole.

“The crazy thing is I lost the first three games then won the next 12 so I pulled it together there,” Williams said. “I honestly think it was nerves. I wasn’t following through on my shots and my strokes felt off.”

He refocused during a break on the bench in between points.

“(I hit) the mental refresh button,” Williams said. “It was 3-0 and I came to the realization that if I didn’t win this next game, my state title (dream) was probably about doomed. That realization created a greater focus.”

Piedra and Ayodeji won at No. 1 doubles, beating Montgomery Catholic’s Sayegh and Cooper Davis 6-4, 6-2. They beat a Decatur Heritage duo in the opening round 6-2, 6-0 and won by the same score in the semifinals over Providence Christian’s Jackson Tate and Kelly in the first two rounds.

Williams and Mun won the No. 2 doubles with a 6-0, 7-5 over Westminster’s Ben Brannon and Mitchell Drennan. They defeated a Decatur Heritage duo 6-0, 6-3 and Providence Christian’s Jackson Sneed and Landon Holloway, 4-6, 6-1, 10-7 in the first two matches.

In addition, three Raiders finished runner-up – Mun at No. 4 singles, McRae at No. 5 and Buntin at No. 6. All three won two matches before losing in the championship match.

Ayodeji won his opening match at No. 2 singles before losing in the semifinals.

Hughes won his individual title at No. 6 singles, beating Houston Academy’s Thomas Buntin in the championship 4-6, 7-5, 10-8.

He opened the tournament with a 6-2, 3-6, 11-9 win over Westminster’s Andrew Robinson before beating Lexington’s Nick Malon in the semifinals 6-3, 6-3.

The Eagles had two other individuals reach the semifinals – Jackson Tate at No. 1 singles and Griffin Kelley at No. 3 singles.

The No 2 (Jackson Sneed), No. 4 (Whitman Rikard) and No. 5 (Landon Holloway) players all lost in the first round.

All three doubles teams advanced to the semifinals and finished 1-1 at the tournament. The teams were Tate and Kelley at No. 1, Sneed and Holloway at No. 2 and Rikard and Hughes at No. 3.

G.W. Long has turned to a veteran assistant coach with plenty of championship coaching game experience as its new head football coach.

Three insurance runs in the sixth inning proved to be crucial as Providence Christian held on for dear life to beat T.R. Miller 8-6 in the qua…

Ariton’s basketball programs will have a new look next season.

Houston Academy and Elba were at the top of the leader board in their classification, Enterprise was in second place and three local individua…