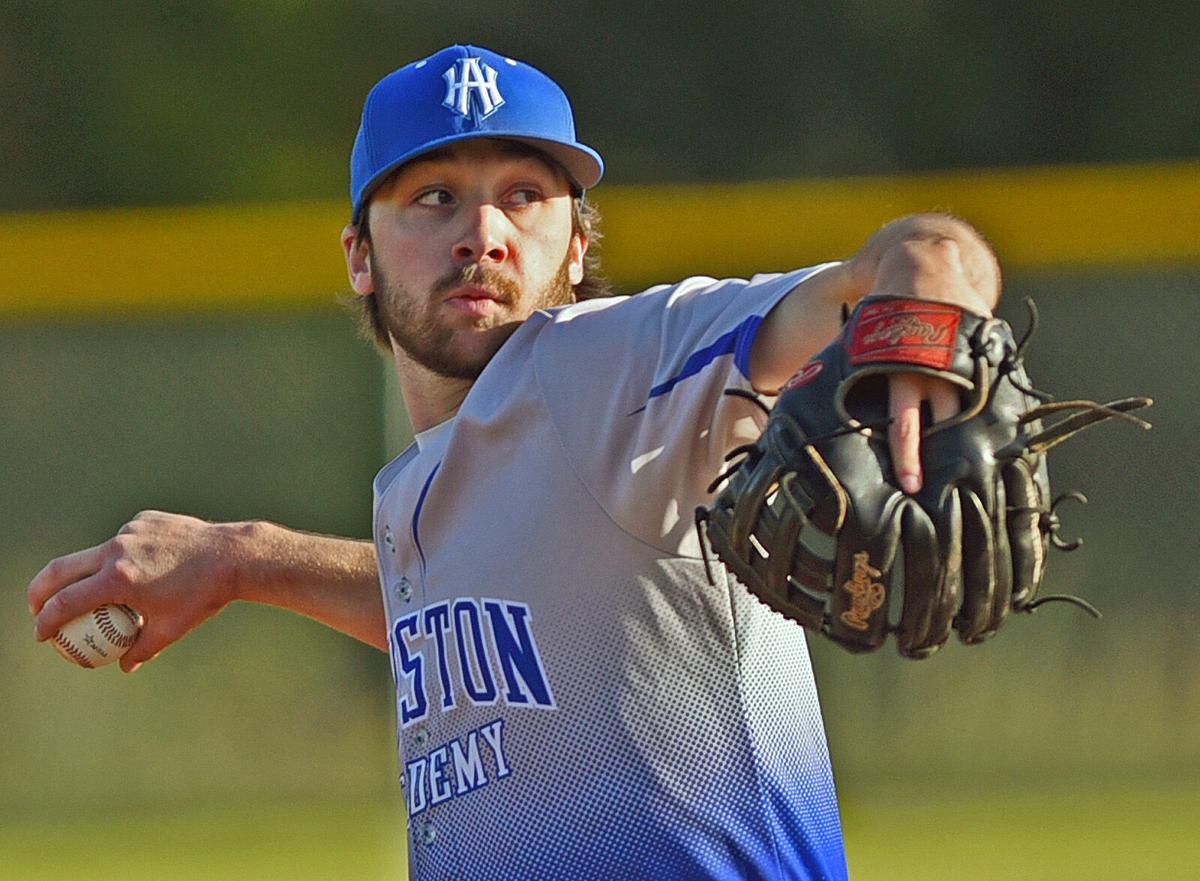 Houston Academy’s Braydon Harvin prepares to make a pitch during the second inning of a game against Wicksburg in Wicksburg on Friday. 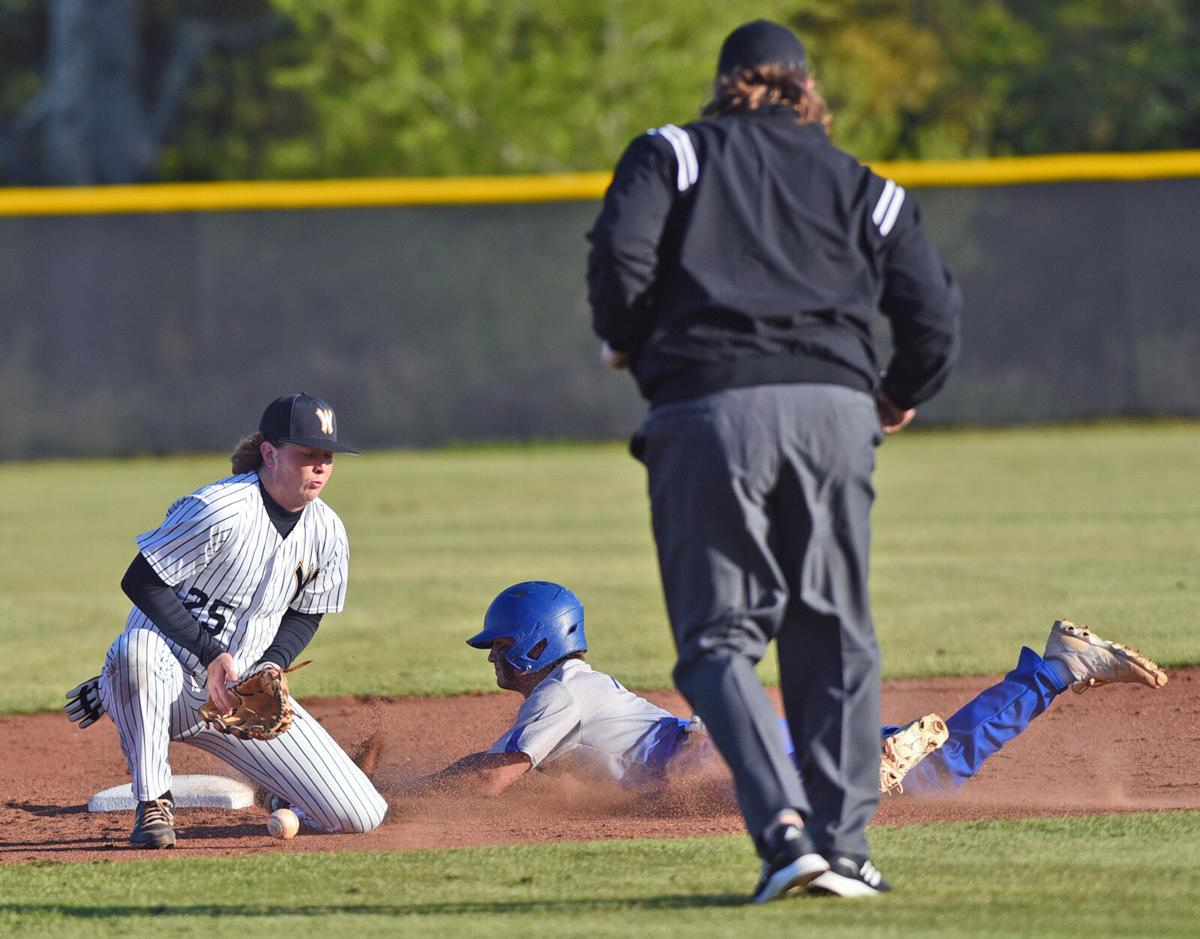 A Houston Academy player takes second base as Wicksburg’s Sawyer Rivenbark tries to come up with a throw during a game in Wicksburg on Friday.

WICKSBURG — It wasn’t pretty at times Friday night, but the Houston Academy Raiders and head coach Tony Kirkland will take the end result.

In a game that featured plenty of base runners and miscues, the Raiders capitalized on Wicksburg mistakes to build a big lead before holding off a Panther threat in the final inning for a 9-6 win in a Class 3A, Area 3 game at Wicksburg.

Houston Academy led 4-0, 5-1 and 9-3 before the Panthers scored three runs in the bottom of the seventh and loaded the bases to put the tying run on base before reliever Tucker Jackson put out the fire with two straight strikeouts to end the game.

Wicksburg coach Jarrod Wagner said the Panthers gave away too much to have a chance at winning. The Panthers gave 21 free bases off five errors, seven walks, four wild pitches, a passed ball, a hit batter and a balk.

“At the end of the day, we made too many mistakes to win and they did a great job of capitalizing on those mistakes,” Wagner said. “Normally, defense is one of our strong suits, but it wasn’t great today. We gave them some extra outs. It was uncharacteristic of us to play defensively like that.”

The teams complete the area series Saturday with a doubleheader at Northcutt Field in Dothan, starting at 1 p.m.

Both coaches quickly reflected to the past in anticipation of the doubleheader.

“I hope we come ready tomorrow,” HA’s Kirkland said. “I know two years ago – as we just discussed (with the players) – we beat them in the first game and came over here and lost two by one run (each), so we can’t be complacent. We have a job to do and I knew they (the Panthers) will be after us. We have to play our best to beat them.”

“We were in this position two years ago and the guys responded well,” added Wicksburg’s Wagner. “Hopefully we will tomorrow. We don’t really have much of a choice. We just have to come back and play better. I feel like we will play better.”

Both pitching staffs didn’t have a clean inning in Friday’s game, but timely double plays by the defense helped early.

Houston Academy pitcher Braydon Harvin induced two double plays in the first innings to wipe a runner and Wicksburg hurler Jackson Glover got a double play in the third. The Panthers also added another double play in the sixth inning when Glover made a diving catch off a bunt pop up and doubled a runner off first base.

The Raiders, though, got on the scoreboard in the second inning, cashing in on a little wildness by Glover. Hughes Dean walked to open the inning and moved to second on a sacrifice bunt by Jack Waller.

With Chapman Andrews at the plate, Glover threw a 2-2 wild pitch that got through the legs of catcher Payton Crutchfield and rolled to the backstop. Crutchfield thought the ball stayed around the plate and couldn’t find it. By the time he realized it went to the backstop, Dean was racing around third to score.

The Raiders padded their lead to 4-0 in the fourth. A single by JT Ackerman and walks to Dean and Waller loaded the bases. After a strikeout, Max Burgreen ripped a three-run double over the centerfielder.

Wicksburg pushed a run across in the bottom of the inning. With one out, Zeke Kelley placed a double to left and moved to third on a wild pitch. He scored on a ground ball out by Beau Sellers.

Houston Academy matched that with a run in the top of the sixth to make it 5-1.

Consecutive errors by Wickburg – a missed grounder and a throwing error—put two on for HA. After a force out at second left runners at first and third, a passed ball allowed Dean to score from third base.

Wicksburg closed the gap to 5-3 with a pair of runs in the bottom of the sixth. Tristan Hill reached on an error on a short fly ball in right field and Glover singled to open the inning. Both runners moved up on a fly ball and Hill scored during a force out at third. Following a Holden Wade double, a passed ball allowed pinch runner Tyler Campbell to score.

Houston Academy then scored four runs in the top of the seventh to build a 9-3 margin in what proved to be valuable insurance runs.

Jackson walked to open the inning and moved to second on a wild pitch. An error on a dropped throw at first allowed JT Pitchford to reach base. After a Pitchford stolen base, Sheldon Ott was intentionally walked to load the bases.

JT Ackerman hit a grounder to the third baseman, who threw to home for a potential force out, but the throw was off the mark, pulling the catcher off the plate and allowing Jackson to score.

Dean followed with a two-run double to right and Waller added a sacrifice fly to drive home Ackerman to make it 9-3.

The Panthers came roaring back in the bottom of the seventh to challenge the Raiders.

Walks to Trey Summers and Hill sandwiched around a hit by Eli Williams loaded the bases.

Jackson entered in relief of Harvin and issued a wild pitch to allow Summers to score and Kelly followed with a RBI single up the middle to make it 9-5.

Sellers drew walk to re-load the bases. Wade hit a slow grounder in the shortstop hole and the throw to first was off the mark for an error with a run scoring to make it 9-6.

With the bases still loaded, Jackson got two straight strikeouts to snuff out the threat and end the game.

Wicksburg had eight hits, including three Kelley. Williams, Hill, Glover, Wade and Sawyer Rivenbark had one each.

Harvin picked up the pitching win for HA, working six plus innings. He gave up five runs, four earned, and seven hits, while striking out and walking five each.

“He is a little ill right now because he didn’t get it done in the seventh inning, but he gave us all he had,” Kirkland said. “He threw very well. He had good location and threw his change-up well for strikes and had his curve ball working. He was keeping it mixed up.”

A walk-off win for Dothan and shutout pitching by Houston Academy, Brantley and G.W. Long on Friday night has set up Saturday’s Dothan Diamond…

Shutouts, close games and a tie contest highlighted the 20-game opening night of the 2nd Dothan Diamond Classic Tuesday at the Westgate Softba…

If a game was played at Rip Hewes Stadium under the watch of J.T. Radney, there was no doubting who was in charge.

Bauer Sharp hit a two-run homer and Te’Relle Georgie-Mills blasted a three-run homer during a five-run fifth inning that helped Class 7A No. 9…

After two double bogeys in the first five holes of his round Tuesday, Rehobeth golf standout Brantley Scott knew he had to regroup.

Morgan Ferguson and G.W. Long were busy blasting long balls Monday and Ferguson was also busy striking out Elba batters too in pacing the Clas…

Houston Academy’s Braydon Harvin prepares to make a pitch during the second inning of a game against Wicksburg in Wicksburg on Friday.

A Houston Academy player takes second base as Wicksburg’s Sawyer Rivenbark tries to come up with a throw during a game in Wicksburg on Friday.