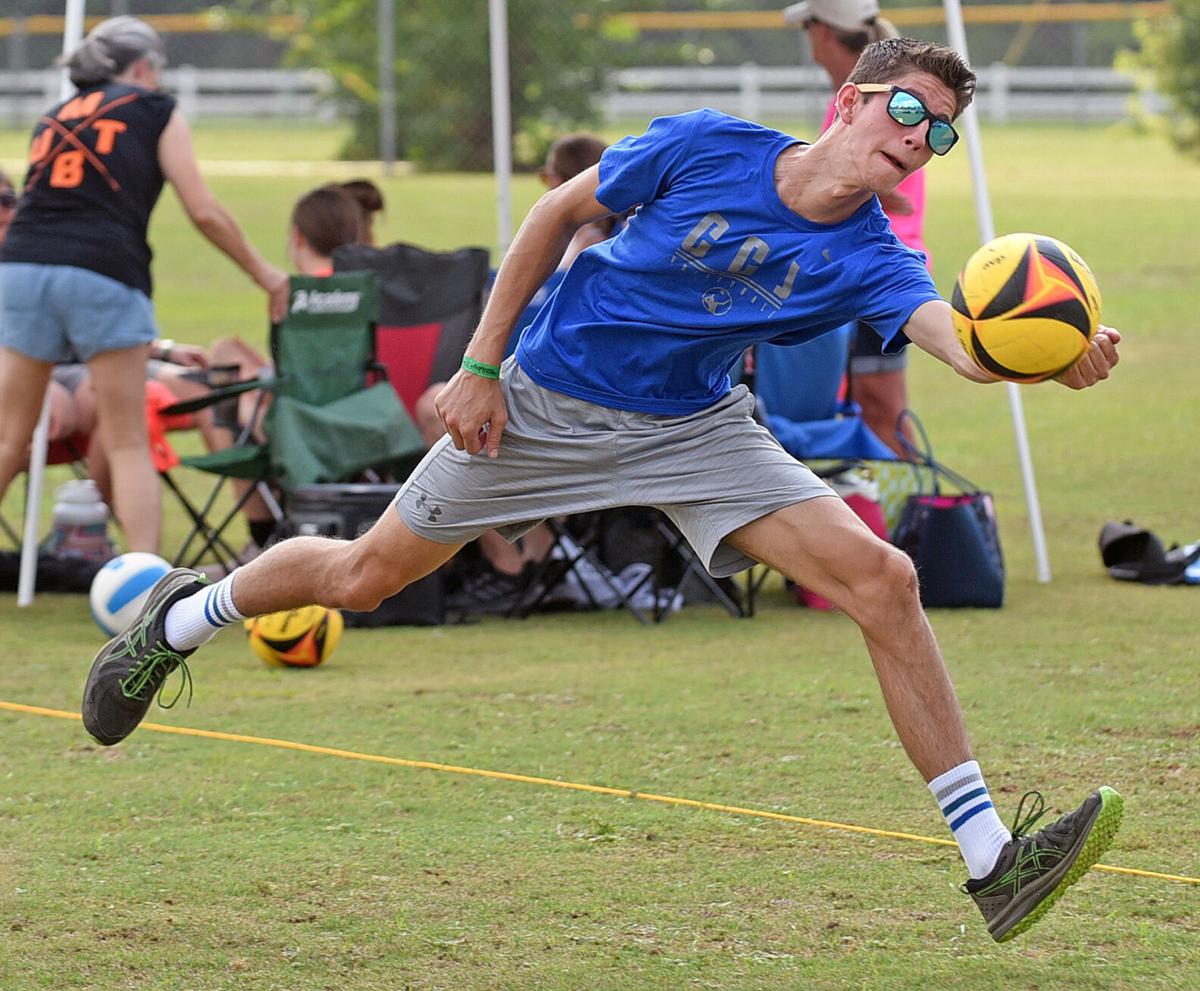 Joshua Edmonson reaches to make a play while playing volleyball with his team during the Alabama State Games on Saturday at Culpepper Park in Daleville. 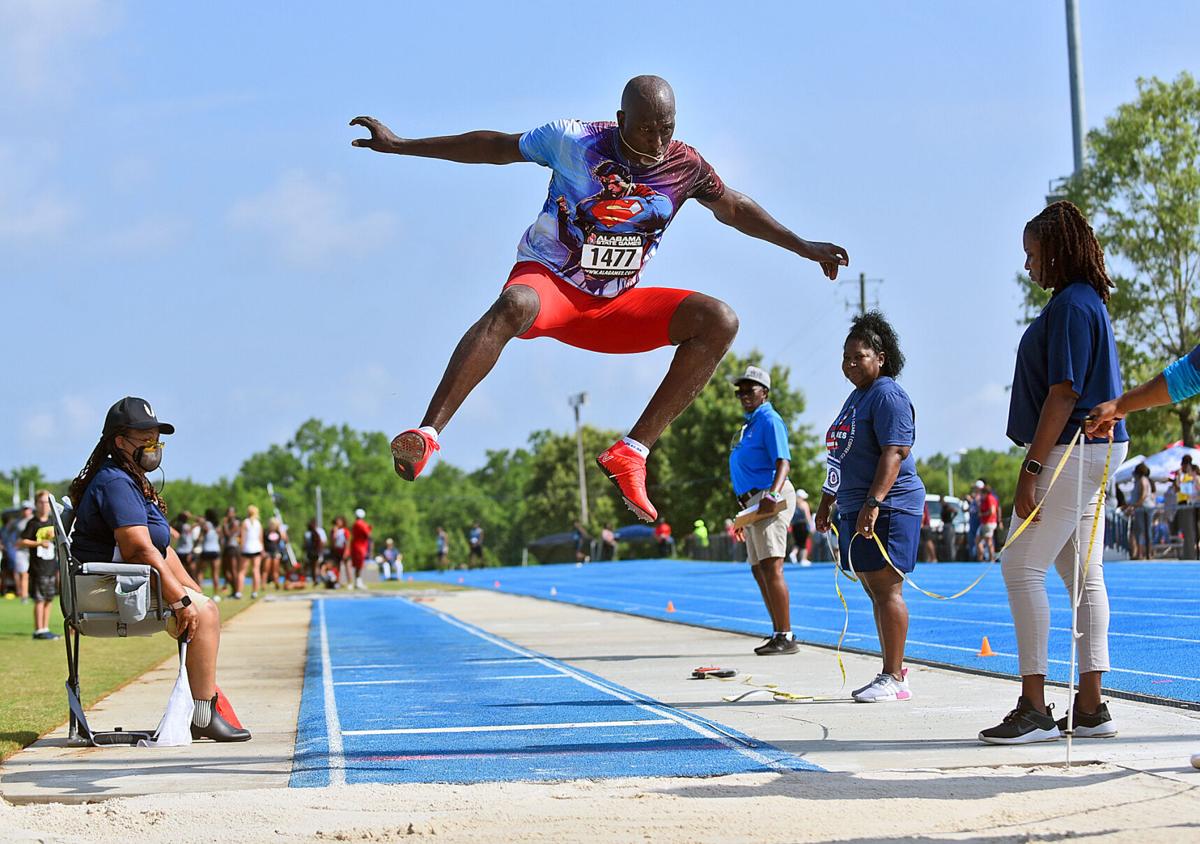 Reggie Hill of Montgomery competes in the long jump during the Alabama State Games on Saturday at Enterprise High School. 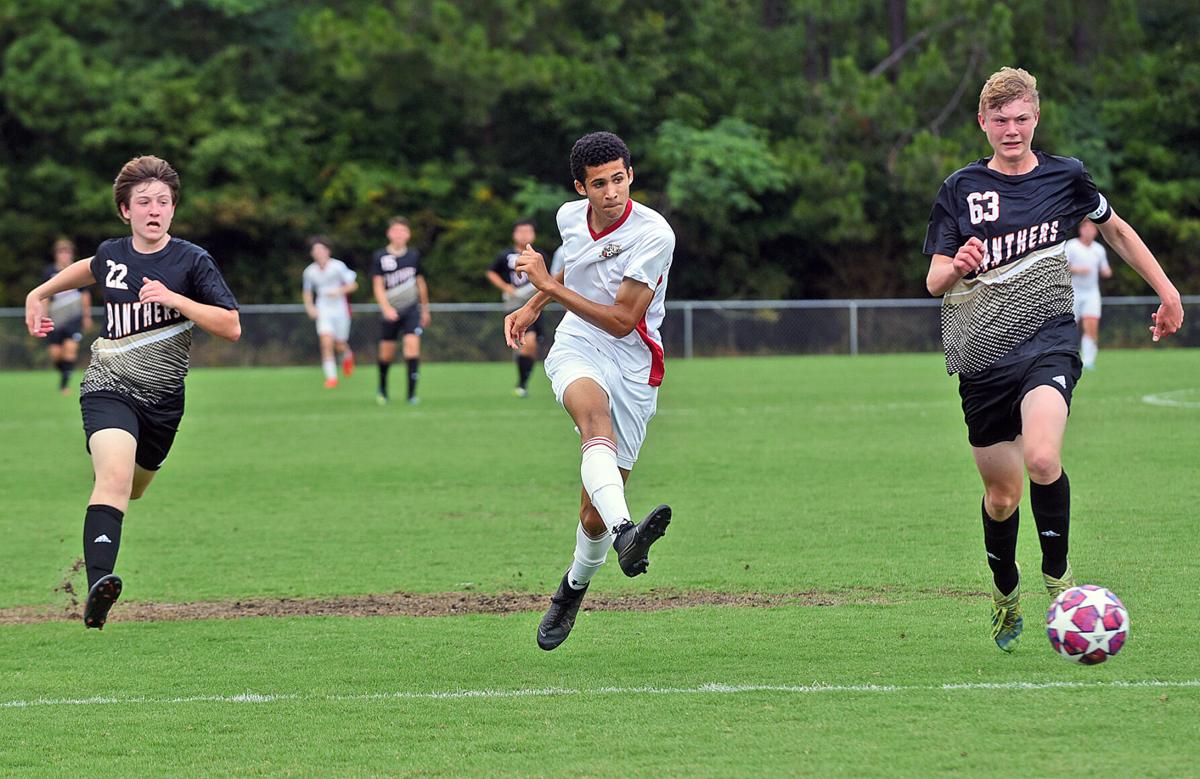 A player from Opelika makes a kick while competing against Pell City during a soccer match in the Alabama State Games on Saturday at Westgate Park. 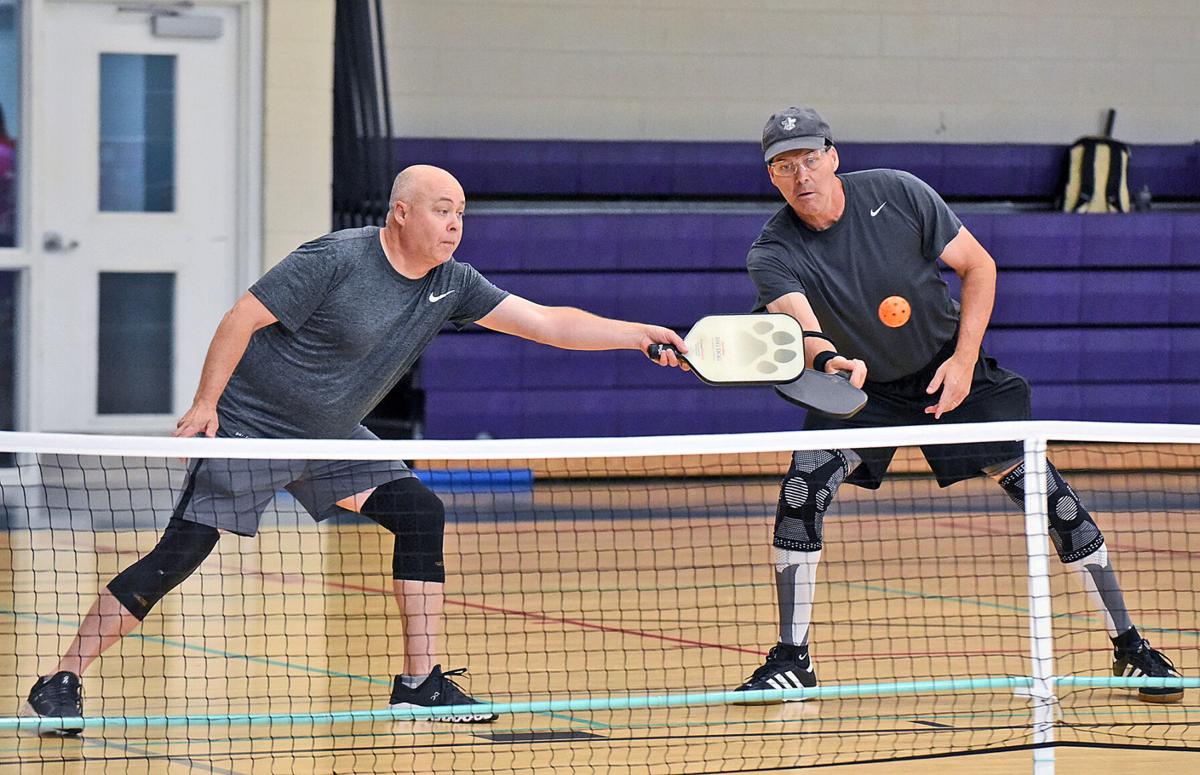 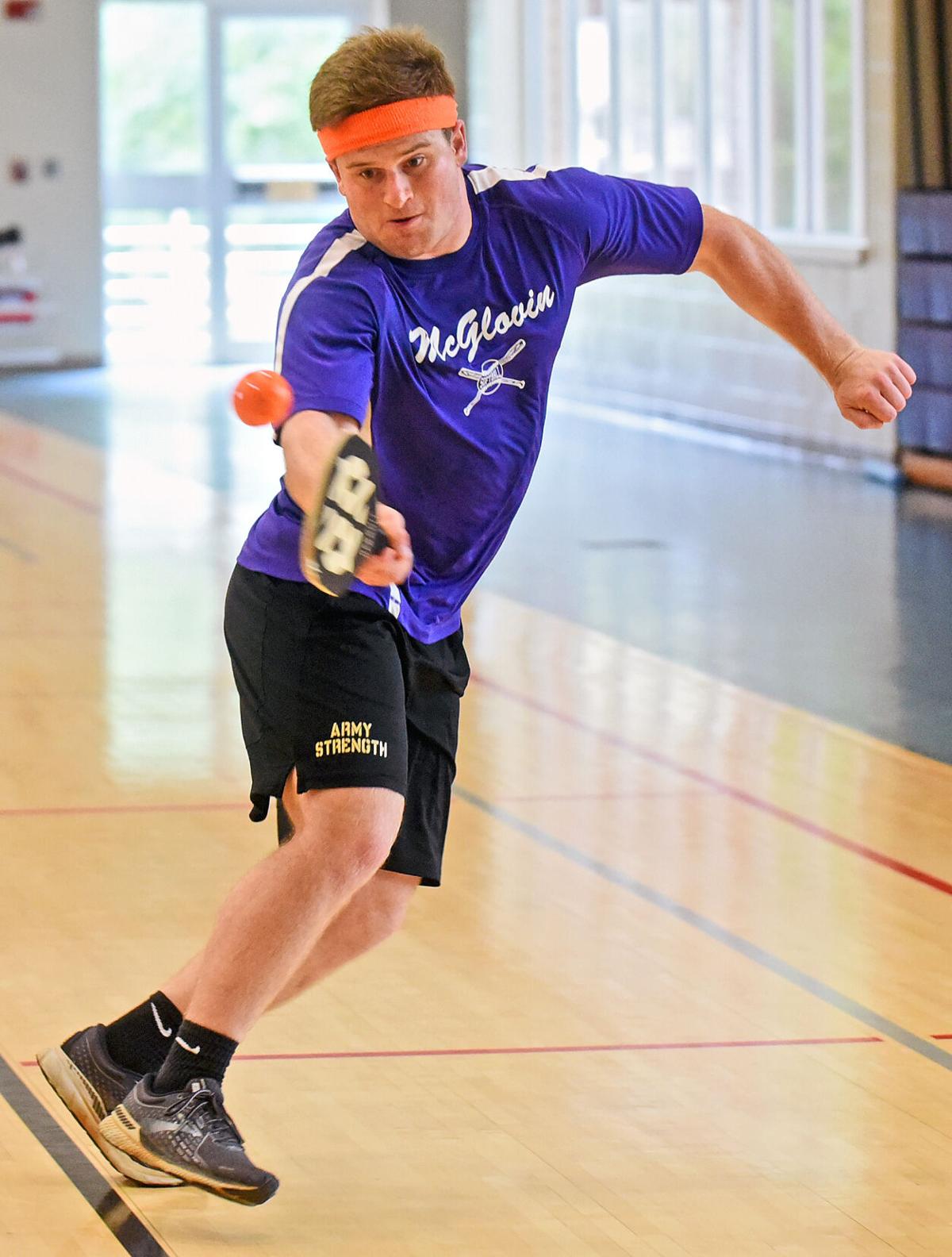 Anthony DiNallo makes a play while playing pickleball during the Alabama State Games on Saturday at Ridgecrest Baptist Church. 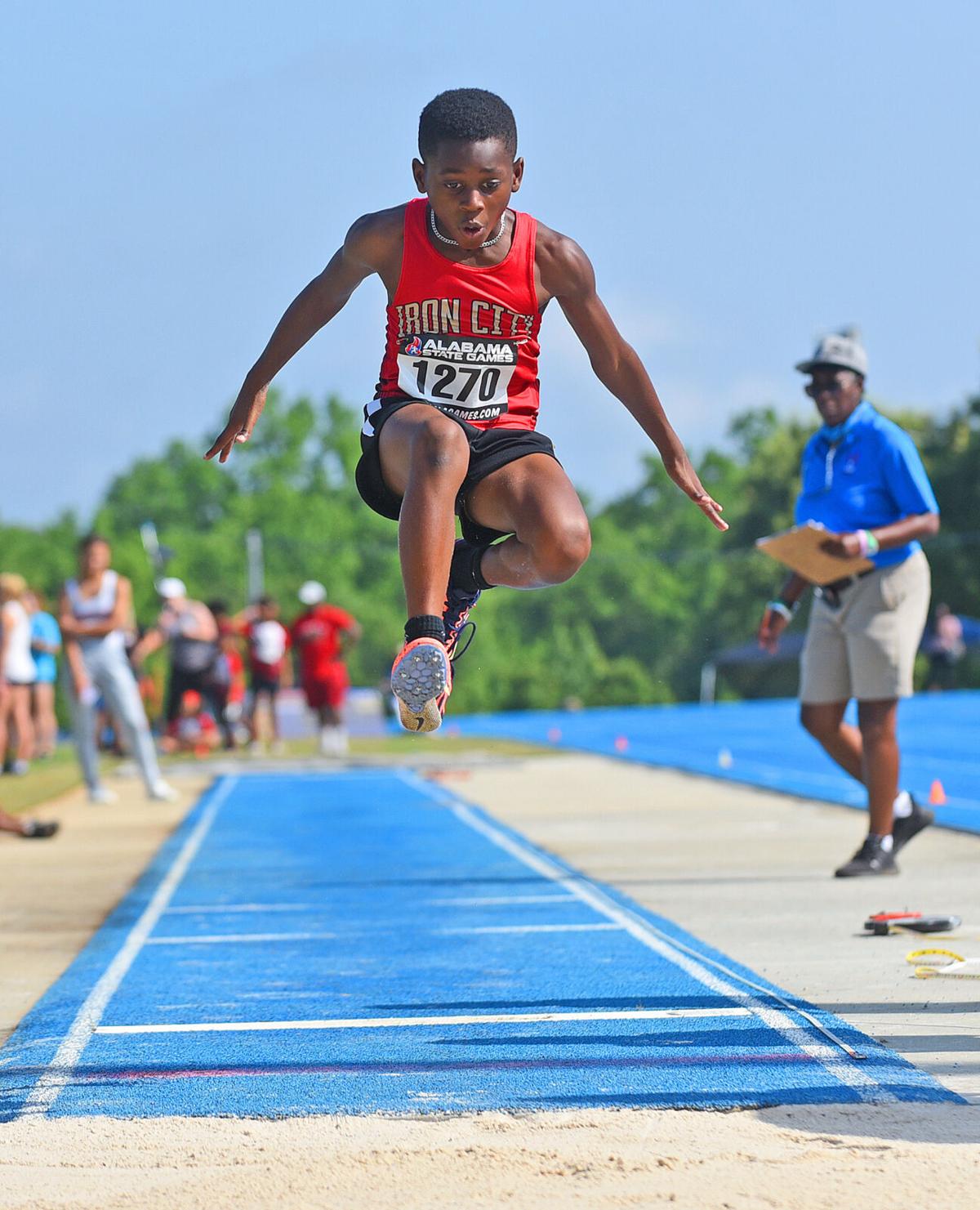 Above: Miles Jones, 9 competes in the long jump during the Alabama State Games on Saturday. 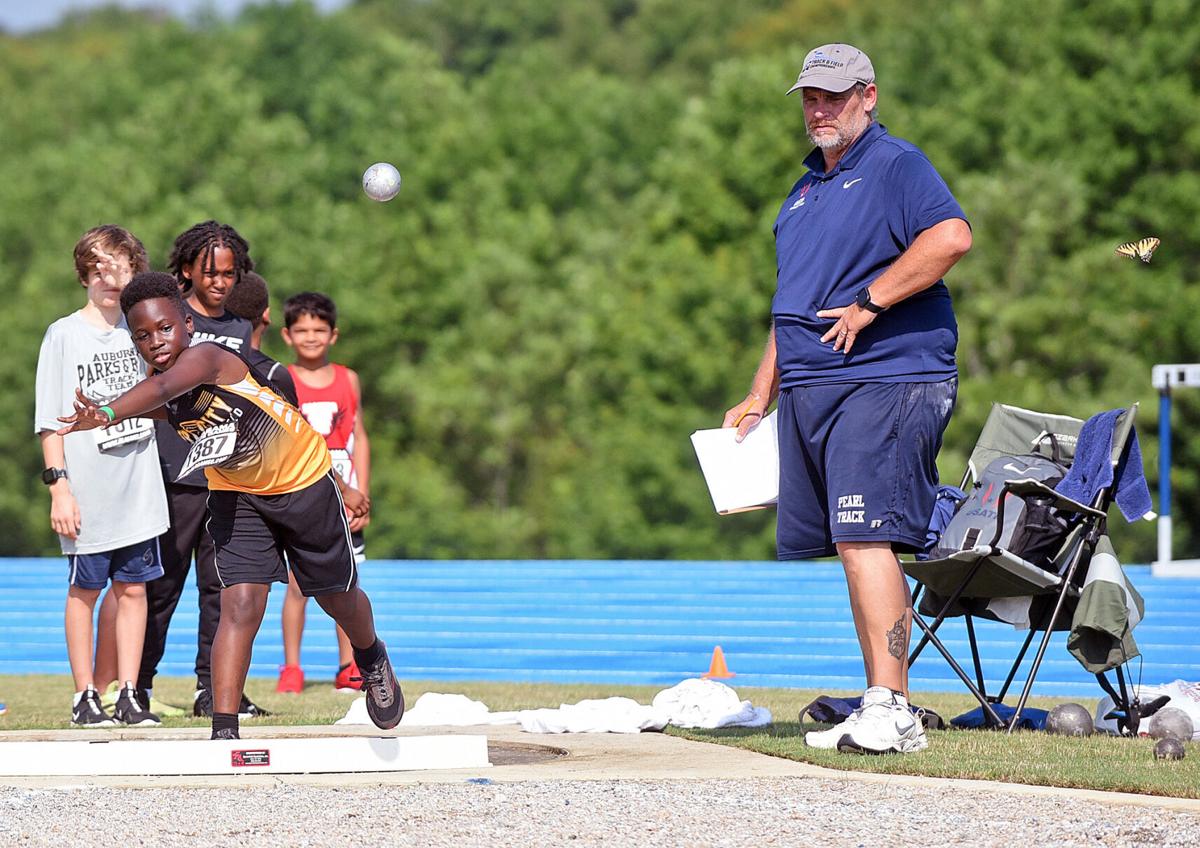 A young boy throws the shot put while participating in the Alabama State Games on Saturday at Enterprise High School.

As the only entrant in the Tour de Wiregrass, I crank up the 2015 Altima and head toward the Westgate Complex for the first view of the athletes taking part in the 38th annual Alabama State Games on Saturday.

In line with my starting time of pulling out of the driveway, most of the Olympic-style games start around 9 a.m., though there were a few early risers already taking part in competitions, such as the 5K runners over at Ozark, Air Rifle & BB gun shooters in Enterprise and gymnasts in Dothan.

They say the early bird gets the worm, but I figure 9 a.m. is plenty early enough to shake off the morning cobwebs, get a swig of iced tea and start my journey.

Stage 1—DothanThe Westgate parking lot is quickly filling up and soccer matches starting as an overload of players and teams necessitate the use of multiple baseball fields along with the regular soccer venues for the weekend of play.

One youngster holds an American flag as he makes his way through the parking lot while youth players wearing colorful jerseys move up and down the fields close by at a rapid pace. Plenty of fans line the sidelines under tents to have some shade from the bright sun beaming down.

As I take a roundabout near the Westgate Tennis Center, I notice players are already busy serving and volleying during tournament play there. I continue the loop and make my way to the back of the complex, where high school-aged and adult players are going at it on the main soccer fields.

Without stopping – remember, I’ve got my own duties – I head towards the exit and take a right onto U.S. Hwy. 84 next to Adventureland Theme Park. Glancing back, I notice nobody is playing carpet golf at this time of the morning. Maybe that sport can be added to the schedule next year. If so, sign me up.

Stage 2—DalevilleSome 20 miles or so later, I take a right onto Alabama Hwy. 85 in Daleville and a quick left following the signage into R.A. Culpepper Park, where I view the first outdoors 4-on-4 volleyball matches held as part of the State Games.

Once parked, I catch some of the action on the two side-by-side courts – a group of teenage girls in colorful attire competing on one, and then some adults, two women and two men on each team, on the other.

While this is the first year outdoors volleyball has been held in the event and there aren’t many teams entered, I’ve got a feeling this will become a popular addition in the years to come. It looks like those involved are having a lot of fun.

Stage 3—EnterpriseI crank the car back up, head out and hop back on Hwy. 84 toward Enterprise High School for my next destination, site of the track and field events.

The parking lot is slam full on arrival and it’s easy to see this is one of the most well attended sports in the competitions. Athletes of all ages are taking place in multiple events – sprints, hurdles, pole vault, long jump – stuff going on all over the place.

I notice a couple sitting under a shade tree with entry numbers attached on their jerseys and medals being held.

After walking over and introducing myself, 65-year-old Lee Taggart of Birmingham tells me he has been competing in the State Games for several years in the 100 and 200 meter runs, and I learn his fiancee, Renda Samuels, who is 52, has been competing as well.

“I started out when I got a word from God that he renewed my youth,” Taggart said. “I got back out on the track. It’s been an adventure.

Samuels got back involved with running because of Taggart.

“This is my second year,” she said. “I ran when I was in high school.”

Both got first place medals in their age divisions on Saturday for the 100 meter dash. Taggart planned to run the 200 meter later in the day.

As for Samuels, she’ll just cheer on Taggart.

“I was supposed to do the hurdles, but I didn’t train like I should have back at home, so I’m going to pass it up this time and next year I’m going to be ready,” she said.

Stage 4—OzarkMy next stop would be the Taekwondo competitions at the Ozark Civic Center. It’s annually one of the most popular events during the State Games and there were competitors of all ages showcasing their skills and then patiently waiting as the judges determined the winners. The discipline shown during the routines is impressive.

Across the street, baseball games are being played at historic Eagle Stadium, one of the really terrific sports venues in our part of the world. If you’ve never been to a game there, do yourself a favor and take one in.

Baseball in Ozark is one of two sports that is scheduled to conclude on Sunday, the other being soccer in Dothan.

With my stomach starting to growl, I head back down Hwy. 231 to Dothan for a quick pit stop at the house for a grilled cheese sandwich, chips and sweet pickles before resuming the tour.

All athletes need to re-energize at some point during a grueling run. I’m no different.

Stage 5 – Dothan againNext stop, Ridgecrest Baptist Church and pickleball – a paddle sport that sort of combines tennis, badminton and ping-pong. It’s one of the fastest growing sports in the nation and it was my first time to watch a match.

The finals in the top division are taking place as I arrive – a doubles match between two college-aged students against two adults probably twice their age or more. It appears as though the young adults are in control, but the veterans are giving them a tough match.

I didn’t stick around to see who won, but did witness enough to understand why it would be an attractive sport for all ages.

It was time to venture over to Dothan Prep Academy to see wrestling. There are no masked men or caged matches like I grew up watching, but the action is fast and furious nonetheless with six different mats being used in unison. It was the first time wrestling has been held in Dothan as part of the State Games, and I was told there were around 70 competitors that signed up. The sport of amateur wrestling is growing in this area.

Final StageThe final stop on my Tour de Wiregrass is the Dothan Civic Center, where baton twirling is taking place in sync with music. The skills are quite impressive, I must say, as two teens twirl away in front of judges.

The huge contrast between wrestling and baton twirling well shows the variety the Alabama State Games offer. There is pretty much a sport for everybody.

I may not have been presented a medal for my ride in the Tour de Wiregrass, but I got a good view of what the Alabama State Games are all about. So did Dothan Eagle photographer Jay Hare, who captured some really neat images during his own journey. On second thought, he should be considered a Tour de Wiregrass entrant as well.

Maybe next year we’ll start training earlier and attempt to visit each of the 20-plus sports annually offered.

Perhaps there will even be some others joining us for the ride.

What was the craziest story in sports yesterday?

As a former player at Enterprise High School, Rhett Harrelson always felt the Wildcat boys basketball program had the potential to be a state …

Before the start of the past academic year, Slocomb junior Jaylen Nobles was aware that playing four sports might be “rough,” but he felt he n…

The Dothan American Rookie Ozone All-Stars capped its summer with a World Series runner-up trophy this past weekend.

The Wiregrass Cardinals 15U baseball team won the Grand Slam National Tournament in Panama City Beach, Fla., on Saturday by defeating the Iron…

As a University of Tennessee signee, most know Karoline Striplin for her basketball skills.

Although the AHSAA’s Alvin Briggs is entering uncharted territory as the association’s new executive director, he may very well face the same …

Joshua Edmonson reaches to make a play while playing volleyball with his team during the Alabama State Games on Saturday at Culpepper Park in Daleville.

Reggie Hill of Montgomery competes in the long jump during the Alabama State Games on Saturday at Enterprise High School.

A player from Opelika makes a kick while competing against Pell City during a soccer match in the Alabama State Games on Saturday at Westgate Park.

Anthony DiNallo makes a play while playing pickleball during the Alabama State Games on Saturday at Ridgecrest Baptist Church.

Above: Miles Jones, 9 competes in the long jump during the Alabama State Games on Saturday.

A young boy throws the shot put while participating in the Alabama State Games on Saturday at Enterprise High School.