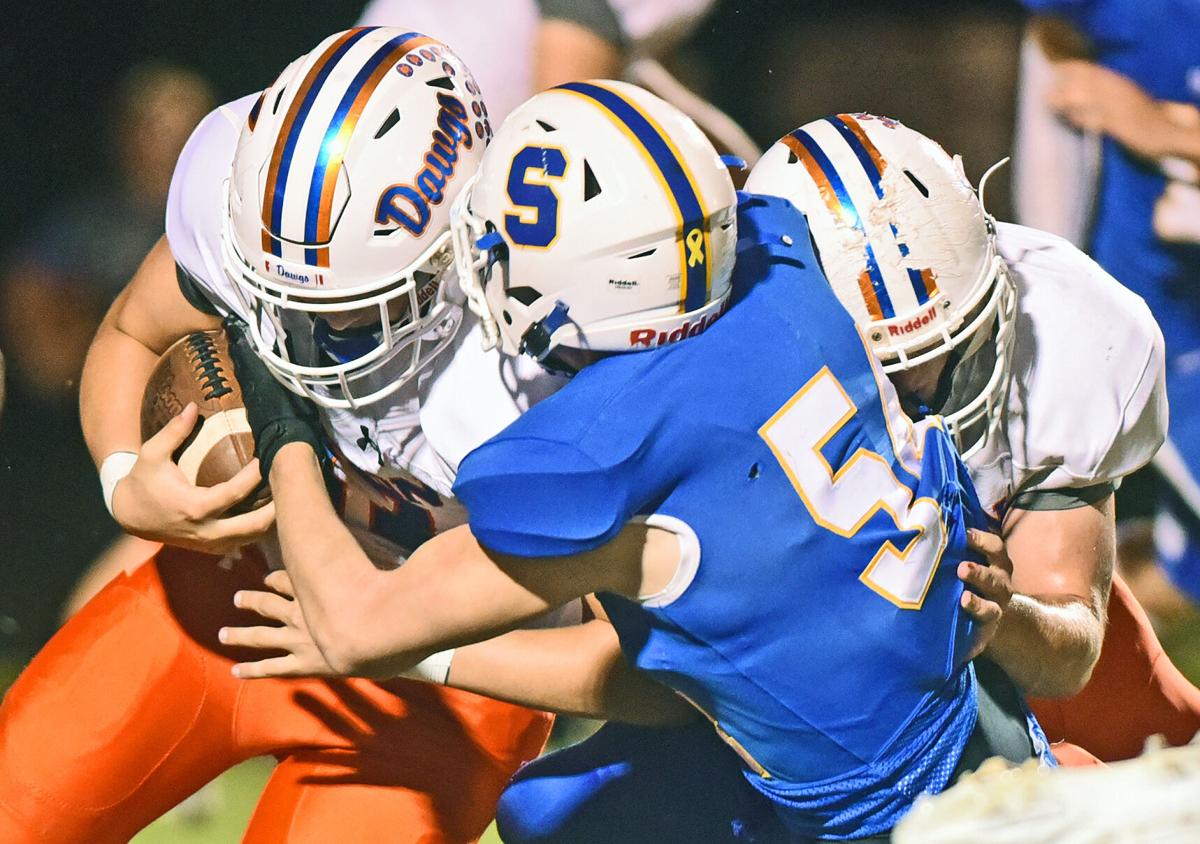 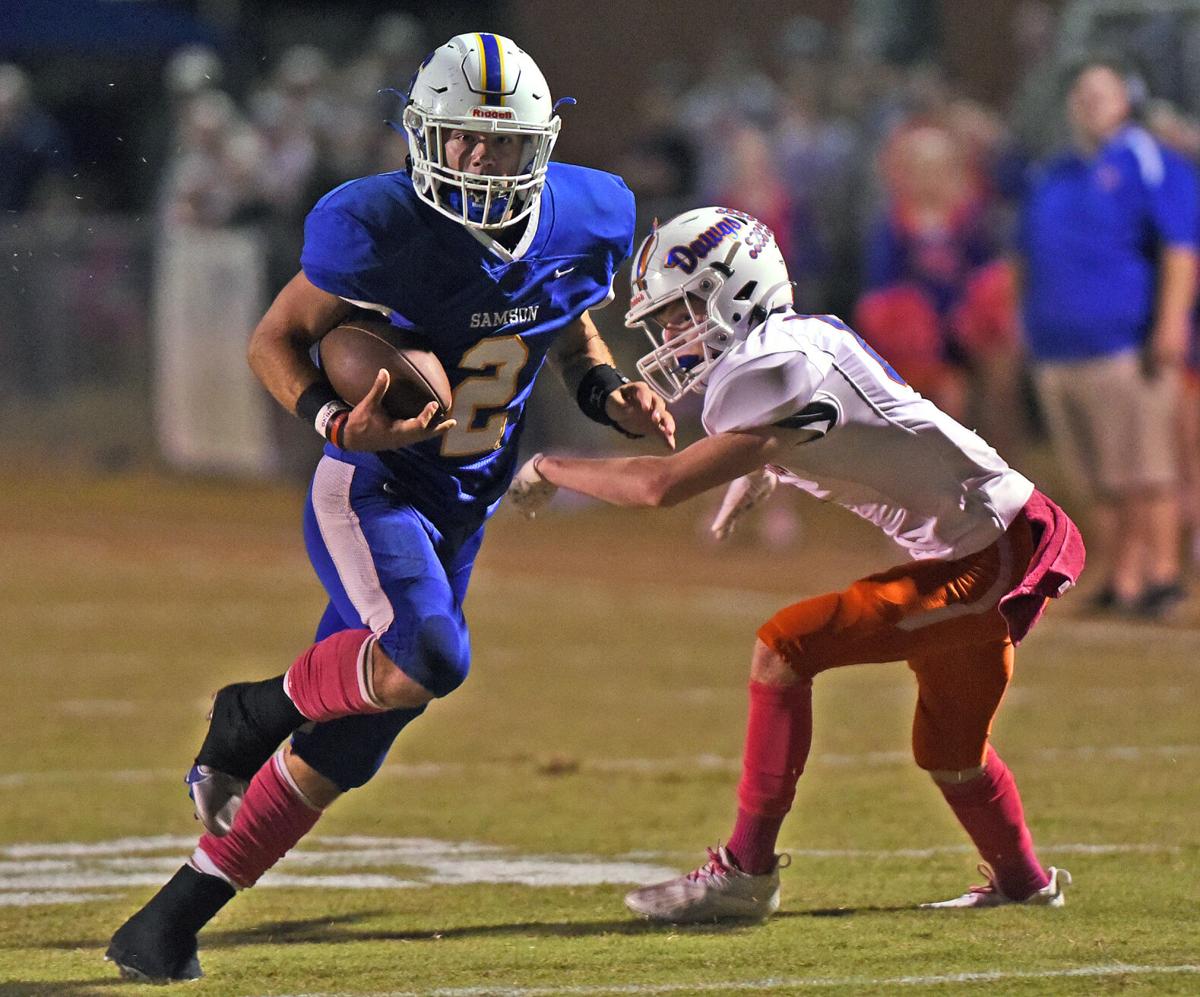 Samson's Braxton Brooks slides by a Kinston defender during a game in Samson on Friday night.

KINSTON — When Rudy Free took over as Kinston head football coach in 2019, he wanted to see the Bulldog players enjoy a lot of smiles over success.

On Friday night, there were record-breaking smiles from every Bulldog player on a special historical night in Kinston history.

Jeb Crosby scored on a 5-yard run on the first play of overtime and John Free booted perhaps the biggest extra-point kick in Kinston history to give the Bulldogs a 21-20 win over Samson Friday night at Samson’s Alva Hawke Stadium.

In addition, Kinston secured second place in Class 1A, Region 1, giving the program the opportunity to host its first ever state playoff game at home. Their 14 total playoff games have all be on the road.

The Bulldogs (7-3 overall, 5-2 in region play) are expected to face Central of Hayneville in the first round in two weeks after enjoying an off week.

“It just means everything,” Crosby, a junior, said of setting the historical feats. “It means the whole world to us. Our goal at the beginning of the season was to beat the school record and obviously go to the playoffs. It came out to our advantage to host. We have worked through the whole season for all this and I am proud of the whole team.”

The success comes after only one winning season since 2014.

“When I first got here, I wanted to see the look on their face when they see success,” Rudy Free, the head coach, said. “That is what I was looking for and I told them that if they kept working and doing what I was asking (it would happen) – and they did. This is a great group of kids. Just seeing the excitement in their face to see them do something that has never been done here just thrills my heart.

Samson (7-3 overall, 5-2 in region) dropped to the No.3 position in the region standings. The Tigers, who are off next week, travel to Linden in the first round of the playoffs in two weeks.

Kinston head coach Jason Wambles, a 1996 Kinston alum and a Bulldog head coach from 2009-15, was proud of his alma mater, even though it came at his team’s expense.

“Kinston came out and played good ball,” Wambles said. “That is what we expected. They have a good team. I am happy for them. That is home. They broke our season winning record. That is not a problem. I am proud of them.”

After Kinston tied it at 14 on a Crosby 1-yard TD run and an ensuing Cale Sumblin to Reece Hall pass for a two-point conversion with 7:15 left in regulation, the teams went to overtime.

Samson had the ball first in the extra period and scored on a 1-yard run by workhorse running back Joshua Lowery on 2nd-and-goal. The Tigers, who lost their place kicker earlier in the game, went for two, but Kinston’s Jayson Mikel stopped Samson’s Brodey Mixon on a run play to the left, leaving it 20-14 Tigers.

It was then Kinston’s turn to start at the 10. Before taking a snap, the Bulldogs shifted linemen from right to left and left to right and in doing so drew an offside violation on Samson, moving the ball to the 5.

It was the second time the play drew Samson offside, though it is designed more to get a favorable match-up on one side of the formation, said Free.

“It is to try and get them (the defense) shifted and to get our guys where we want them on our side (for a favorable match-up),” Free said. “We flipped our line so they flip-flop with us and we are trying to get them kind of misaligned. If they jump offside, it does work in that advantage too.”

On the ensuing snap, Sumblin, in the shotgun, took the snap, spun around and handed off to Crosby on a reverse to the right side. Crosby went out wide and finally hit the corner toward the side and sped down the sideline for a touchdown.

“It is designed to run outside, but I had to run a little more outside than I usually do,” Crosby said. “I broke a tackle and raced in. The line made it pretty easy and my outside blockers (wide receivers) made good blocks.”

John Free, Rudy Free’s senior son, then calmly booted through the extra-point kick to break the tie and give Kinston the win, 21-20.

While Kinston officially won it on the game’s final play, it may have been two series of plays in the first half that were even more valuable.

Samson dominated offensively in the first two possessions, moving inside the 10 on drives of 12 and 11 plays. However, on both the Kinston defense bowed up and stopped Samson, keeping the game scoreless.

“We are normally pretty good at punching it in but Kinston did a good job and had the right calls to stop what we were doing,” Samson’s Wambles said. “We just didn’t do what we needed to do in the first half to put them away. If we score those first two times, it is a different ball game.”

On the first series, Samson had it 1st-and-10 at the 11 and gained 5 yards on the first play off a Lowery run, but an incomplete pass was followed by Kinston defenders Dylan Davis and Blake Senn stopping quarterback Braxton Brooks for a 1-yard loss, bring up 4th-and-6 at the 7. Brooks then rolled to his left, but two Bulldog players stopped him in the backfield to end the threat.

Samson moved inside the 10 again on the next series. After a 6-yard gain by Brooks to the 2, Lowery was held to a 1-yard gain, setting up 4th-and-1 at the 1. Lowery again got the call, but the middle of the Kinston defense stopped him short of the goal line.

“We had two big stops early that really kept us in the game,” Free said. “We have 11 guys on defense that are not the biggest guys in the world, but they play so hard. They have done it all year.”

The Tigers, though, wouldn’t be denied on their next series. After forcing a punt, Samson took over at the 26. Six plays later, Konner Owens, running the wildcat package, scored on a 1-yard run off the left side. He also scored on a two-point conversion to make it 8-0 with 5:28 to go before halftime.

Kinston, with Sumblin in at quarterback after missing six weeks with an injury, directed the Bulldogs to an eight-play, 60-yard scoring drive. He was 5-of-6 passing in the series, capping it with a 21-yard TD pass to Senn on a pump fake to a receiver on the line with the slot receiver Senn sneaking out to the end zone for the throw. Samson’s Lowery knocked down a 2-point conversion pass attempt, leaving it 8-6 Tigers with 1:29 left in the second.

The Samson defense stepped up with a big play early in the third quarter to surge ahead as Sumblin had a pass go off the hands of a receiver and the Tigers’ Coe Kelly picked it off and ran 33 yards for a touchdown to make it 14-6 with 6:40 to go in the third.

Kinston got a big break early in the fourth quarter. After a 14-yard sack by Jayson Mikel and Jack Perry pushed Samson back to the 8 and forced fourth down, the Tigers were in punt formation, but the snap squirted out of the center’s hands and Samson had to fall on it at the 5.

“The ball was wet (from the dew) and when we snapped it, it just rolled out of his hands and that gave them a good opportunity,” Wambles said. “You can’t make those kinds of mistakes in a game like this.”

The Bulldogs capitalized, scoring on 4th-and-1 on a 1-yard run to the right by Crosby. Sumblin passed to Hall for the two-point conversion to tie it and set up the overtime.

Kinston’s offense struggled most of the night against a strong Samson defense that allowed only 137 total yards. Crosby earned 45 yards rushing on 17 carries and the return of Sumblin at quarterback sparked the passing game for 77 yards off 6-of-12 passing. Senn caught four passes for 70 yards.

“It gives us another dimension on offense,” Free said of having the 6-foot-4, 220-pound Sumblin back. “We can throw the ball a little more. Jeb is more of a running back and he had to fill in 5-6 games at quarterback and he has done whatever we have asked him to do.”

Brooks, who had his knee swell up after a hit late in the second quarter, had 65 yards rushing on 11 plays and threw for 52 yards on 4-of-6 passing before his injury.

“We are on our fourth-string quarterback (Coe Kelley) and when that happens, it kind of limits you on offense in what you do,” Samson’s Wambles said. “We lose two quarterbacks and that killed our game plan.”

Lowery rushed for 73 yards on 22 carries for Samson.

Defensively, Kinston was led by Mikel, who was in on 23 tackles, eight solos, and by Perry with 12 tackles. Crosby recovered a fumble midway in the fourth quarter when the Tigers were driving.

After three seasons as the head football coach at Enterprise High School, Rick Darlington is returning home to the state of Florida to become …

A year after the Downtown Dothan Hoops Classic was canceled due to COVID-19, it will return with a bang on Dec. 27 when county rivals Headland…

Two standout volleyball players, an elite cross country/track runner and a talented baseball player had a moment of a lifetime Monday at the P…

Samson's Braxton Brooks slides by a Kinston defender during a game in Samson on Friday night.