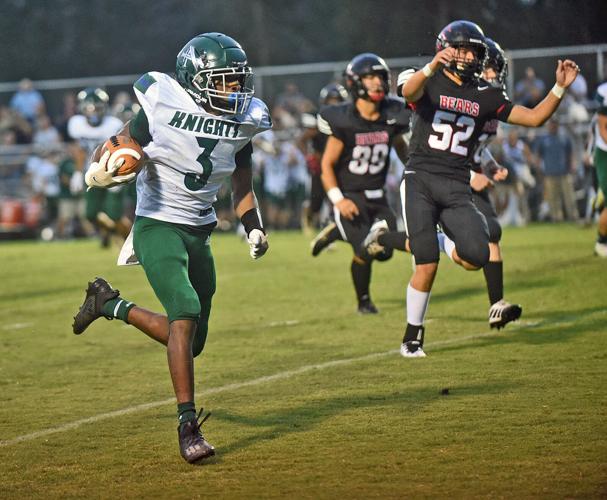 Northside Methodist Academy’s JJ Smith runs for a gain during a game against Cottonwood on Thursday night in Cottonwood. 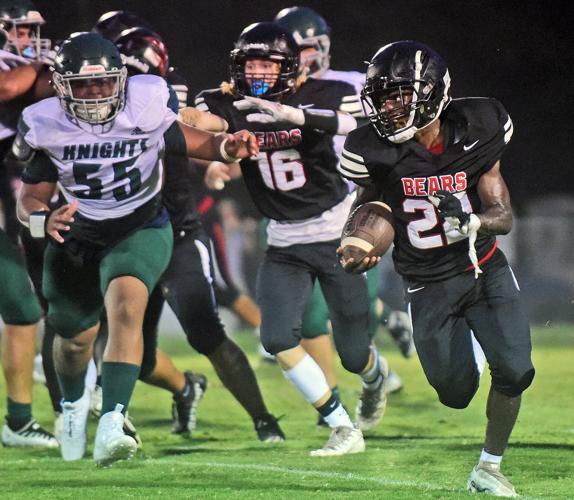 Cottonwood running back Anthony Pressley runs for a gain during a game against Northside Methodist Academy on Thursday night in Cottonwood.

For the third straight year, the game came down to the end. After a 25-play touchdown drive that lasted 11 minutes and 21 seconds, Cottonwood couldn’t convert on a two-point play to tie with 1:58 left and Northside Methodist held off a desperation pass on the final play to take a 28-26 win over the Bears at Cottonwood’s Hicks Field.

Ironically, it was the same final score and similar ending as last year only reversed as Northside Methodist missed on a two-point conversion in a second overtime of a Cottonwood 28-26 win. The year before the Knights held on for a 37-34 win as the Bears moved to midfield in the final minute.

“A great high school football game,” Northside Methodist head coach Toby Greene after Thursday’s win. “Both teams played their hearts out. It’s a shame either team had to lose. Both coaches should be and I am sure are proud of the kids for playing hard.”

Northside Methodist improved to 2-0 for the first time since joining the Alabama High School Athletic Association in 2019 and for the first time overall since 2015 when it as an AISA member and coached, ironically, by current Cottonwood coach Dustin Harrison.

With the Knights leading 28-20 following the third touchdown pass of the night by junior quarterback Harrison Hicks, the Bears took over with 1:19 left in the third quarter. They would march down the field on their long time-consuming drive, converting three clutch fourth downs and a 3rd-and-16 on the possession.

The last fourth down conversion was on the final play when running back Anthony Pressley took a toss sweep to the left and scored on a 1-yard run with 1:58 left, pulling the Bears within two at 28-26.

Bidding for the tie, Cottonwood quarterback Kaden Simmons rolled right then fired in the middle of the end zone to tight end Ethan McCardle, who was open. However, the throw was high and McCardle jumped, but could only get one hand on it and had the ball go off the hand out of bounds for an incompletion.

Cottonwood attempted an onside kick, but Northside Methodist’s Colin Blackwell recovered it at the Bears 49. The Knights, though, couldn’t get a first down and punted the ball back to Cottonwood, which took over its 28 with 25.1 seconds left.

The Bears threw three incompletions before completing a pass in a crowd near midfield, but the receiver was quickly tackled as the game’s final horn sounded.

The second half was dominated by three series that lasted all but two of the 24 minutes of the final two quarters.

The Bears took the opening possession 82 yards in 11 plays in nearly six minutes to cut the gap to 21-20 on a Pressley 5-yard scoring run with 6:11 left in the period. A try for two and the lead was stopped short by the Knights’ defense.

Northside Methodist burned up nearly five minutes of its own on the ensuing possession with a 12-play 57-yard scoring drive, converting three third downs on the series. Hicks threw a 3-yard pass to Jadyn Watkins on a 3rd-and-3 slant play with 1:19 left. Fitz Carter added the point after kick to make it 28-20.

Cottonwood then went on its impressive time-consuming touchdown march, overcoming three penalties including a 15-yard blind-side block penalty that wiped off a 44-yard TD run by Pressley.

The drive was sparked by a 6-yard 4th-and-6 conversion pass from Simmons to Ethan Gilley, a 17-yard Pressley run that converted 3rd-and-16 and a 2-yard keeper by Simmons that converted a 4th-and-2.

“We did a good job of executing (on the drive),” Cottonwood’s Harrison said. “We had several plays called back which made the drive last so long. We had a few explosive plays get called back, but our players did a good job of playing the next play, though, which is what we preach — to not cry over it because there is nothing you can do to change it. I was proud of them for that and for executing.”

Harrison added he “was really impressed with how the guys responded with some key third downs and fourth downs” on the series.

Both teams scored on their opening drive of the game. JJ Smith scored on a 32-yard run for Northside Methodist, two plays after Hicks completed a 47-yard pass to Stefan Gainey. Cottonwood answered with a 1-yard scoring plunge up the middle by Braylon Morris. Both teams missed the conversion attempt with NMA missing a kick and Cottonwood misfiring on a two-point pass attempt.

The Bears surged ahead 14-6 with 2:40 left in the half when Jalen Lettinhand scored off the left side on a 4-yard run and caught a two-point conversion pass.

The Knights, though, quickly answered. After a motion penalty, Hicks found Watkins across the middle on a crossing route and the Knight wide receiver caught it and turned the corner down the sideline on a 62-yard TD pass just 20 seconds after the Bears score. NMA converted a two-point conversion on a Hicks to Blackwell pass to tie it at 14.

Northside Methodist then forced a three-and-out and punt. Starting at the Cottonwood 46, the Knights scored in three plays when Hicks lofted up a pass to a streaking Tyler Quintero for a 35-yard scoring pass with 40 seconds left in the half. Carter’s point after kick made it 21-14 NMA.

“That was just a go ball,” Greene said of the TD pass. “That (Quintero) wasn’t the primary read. We talked about it and I told Harrison, ‘If they come up and press, take a shot at that play. That is always an option.’ In our offense, the quarterback picks the options and Harrison made a great decision and a great throw. Tyler caught it and ran with it.

“I am happy for Tyler. He caught a lot of big passes last year for us, but didn’t have any touchdown passes. We promised him that we had to get him one early in the year, so I am really happy that Tyler got his first varsity touchdown tonight.”

Hicks finished the game 10-of-13 passing for 178 yards and also had a key 19-yard run to convert a 3rd-and-17 on the final scoring drive in the third quarter.

“We were able to throw and catch tonight,” Greene said. “Harrison did a great job and the receivers did a good job of getting open. I was proud of Harrison because he showed a lot of poise. He ran the ball when he needed to and took some tough licks, but kept bouncing back.”

While Northside got most of its offense through the air, the Bears were ground and pound with 284 rushing yards. Pressley finished with 137 yards off of 14 carries with two TDs and Lettinhand had 107 yards on 18 carries with one TD.

Cottonwood’s Harrison reported after the game that receiver Dylan McCardle, who left the game by ambulance on the Hicks run in the third quarter, was expected to be OK.

“We think he is OK,” Harrison said, who got a report from McCardle’s brother after the game. “It was precautionary. They were checking his head and neck. He never lost conscious and he was squeezing my hand and he was able to talk.”

The Dothan boys basketball team defeated New Hope 61-36 on Tuesday afternoon to advance to the finals of the Red & Turkey Shootout in Tuscaloosa.

Houston Academy hit 9-of-10 free throws in the fourth quarter in defeating host team Ariton 53-46 in the Ariton Hoopsgiving Tournament on Wednesday.

Charles Henderson head coach Quinn Hambrite has experienced football the day after Thanksgiving once before, doing so as the defensive coordin…

Round one of the city of Dothan’s prep wrestling dual action belonged to Houston Academy.

Who has scored the most World Cup goals of all time?

Some prep coaches opt to pray, while others punt

Some prep coaches opt to pray, while others punt

Northside Methodist Academy’s JJ Smith runs for a gain during a game against Cottonwood on Thursday night in Cottonwood.

Cottonwood running back Anthony Pressley runs for a gain during a game against Northside Methodist Academy on Thursday night in Cottonwood.