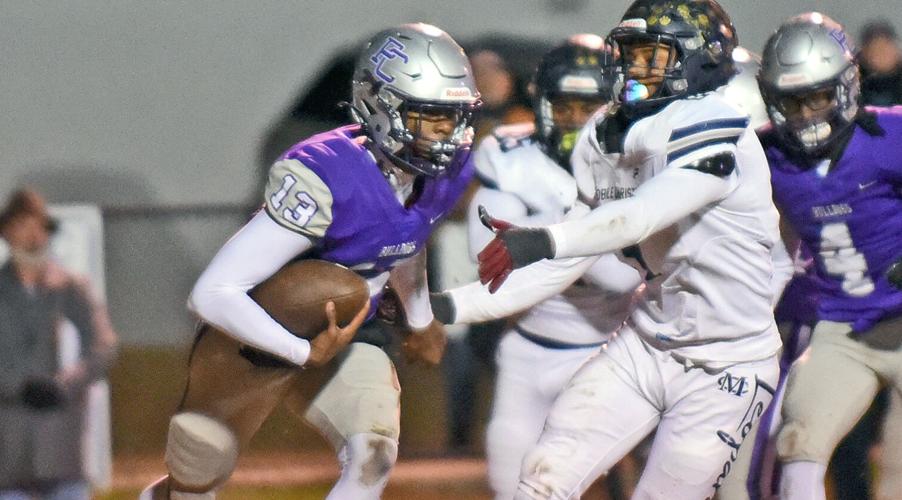 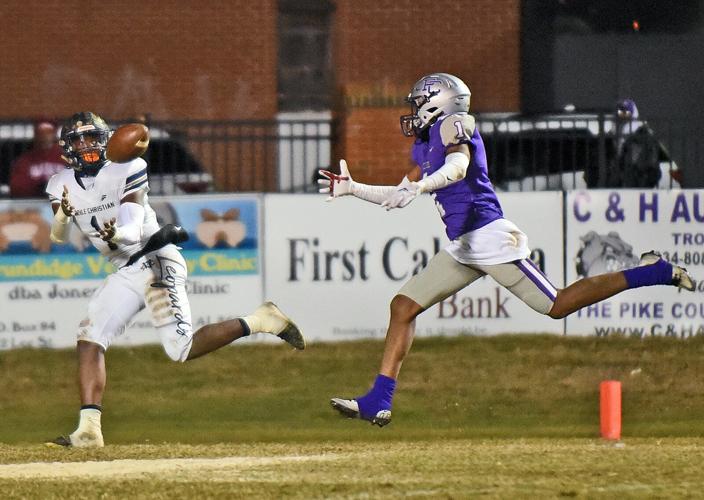 The Bulldogs couldn’t overcome the loss of two standouts early in the game, a rash of penalties, four turnovers and a stout Mobile Christian defense, falling to the Leopards 27-7 in an AHSAA Class 3A state quarterfinal game at Bulldog Stadium.

The Bulldogs finished the season with an 8-4 record, a year after finishing 0-9.

“It took a lot of hard work and a lot of dedication and believing we could do it,” said Pike County head coach Mark Hurt, who guided the turnaround in his first season at the helm of his alma mater.

“The kids bought it. I thought this (tonight) was a test unlike they have ever had – not the fact that the team we played was that way, but you don’t have all your guys and guys that normally keep you up and give you inspiration. That was a challenge. Those young guys have to step up and I think they will learn how to do it.”

The Bulldogs do-it-all star Ian Foster went down with a hip injury during the first series of the game when a Mobile Christian running back landed on Foster’s right hip while the PCHS star was making a tackle. He didn’t return to the game.

Late in the first quarter, running back Nemo Williams, Pike County’s leading rusher on the season with just under a 1,000 yards, was disqualified along with Mobile Christian center Bo Cagle when the two started shoving and punching after Cagle hit Williams in the back away from the ball.

“We lost half of our offense and a lot of our defense,” Hurt said, especially referring to Foster, who accounted for 26 touchdowns in receiving, rushing and in returns, both kick and interceptions. “Ian got hurt on the first play of the game. Nemo let his youngness get the best of him when somebody pushed him from the back.”

The Bulldog defense, though, played inspired ball for much of the first quarter, constantly harassing Mobile Christian quarterbacks and earning several sacks.

But the Pike County offense, without it star players, couldn’t get anything rolling against the Leopards defense, amassing just 75 total yards and five first downs on the night.

The mistakes also began to pile up as the Bulldogs had four turnovers and 10 penalties for 98 yards with most of the penalties as personal fouls.

The first major mistake came midway in the first quarter. With Mobile Christian backed up at the 10, a shanked punt bounced inside the 25. Pike County’s Que Carter decided to grab the football, but fumbled while doing so and Mobile Christian recovered at the 21.

The Leopards drove to the Pike County 19, but turned the ball over downs on a fourth-down incompletion to the back of the end zone.

While the Bulldogs stopped the drive, a potential first-score strike off good field position went by the boards with the early fumble.

Mobile Christian, starting with good field position at the Pike County 41 following a three-and-out and punt, moved to the Bulldog 16 but sacks by Ja’quan Sweeney and Carter snuffed out the threat as the Leopards turned it over on downs.

The Leopards defense, which bottled up the Bulldogs most of the night, helped Mobile Christian start at the 49 on the ensuing series. After two open receivers dropped potential touchdown passes, the Leopards went right back down the middle of the field, taking advantage of the absence of Foster in the secondary with a 34-yard Landon Snow to Michael Moore touchdown pass with 25 seconds left in the half. The extra point kick was good by Carter Lewis, making it 7-0 at halftime.

The game turned in the third quarter as mistakes and penalties plagued the Bulldogs and Mobile Christian took advantage with two touchdowns to build a 20-0 lead.

After Pike County’s Carter recovered a lateral fumble by Mobile Christian at the 44, the Dogs turned it over two plays later when Camden Lawson intercepted a pass off an intended wheel route by the Bulldogs.

Midway in the period, a 28-yard punt return by Moore put the Leopards in business at the Pike County 45. Two plays later following an 8-yard run and an unsportsmanlike conduct penalty on Pike County, Mobile Christian’s Ben Brewer took it around the right side from 26 yards out with 3:39 left in the period. The extra point was no good, leaving it 13-0.

Three plays into the Bulldog series, Pike County threw another interception off a deflection and the Leopards returned it to the PCHS 18. Two plays later, Brewer, on a jet sweep, took a forward toss from the quarterback around the right end 6 yards to paydirt. Lewis’ PAT made it 20-0 with 2:12 left in the third.

Mobile Christian threatened early in the fourth quarter, but Pike County’s Jamious Williams intercepted a pass in the end zone.

The Bulldog offense, which had only one first down and 29 yards through three quarters of play, had its best drive of the night with toss sweeps to Zay Carlisle earning 38 yards to the Mobile Christian 37.

The drive, though, ended when Brewer jumped in front of a pass on the outside and raced 70 yards for a touchdown to put the Leopards up 27-0 with 5:49 left.

The Bulldogs avoided the shutout when a bad punt snap went into the end zone and Carter recovered the fumble for a touchdown with 1:29 left. Cruz Juarez added the point after to make the final 27-7.

Hurt was already the turning the page of this season towards next year.

“We have a young team and we have a lot of good players (returning) and we are going to come back and pound the weight room,” Hurt said. “We will talk about all the things we went through this season and we will get better.

“We have a lot to look forward to. We have a good program and we will continue to make it better.”

J.T. Pitchford says putting down the basketball and concentrating solely on baseball was “a game changer” in his athletic endeavors.

During the first five games of the season, Dothan head coach Jeremy Bynum said his Wolves had shown glimpses of their offensive capability.

The preparation is complete. The stage is set. Now, it’s time for action.