Providence Christian School quarterback Grant Baker handles an exchange as he looks for running room against the Opp defense on Friday night at Providence. 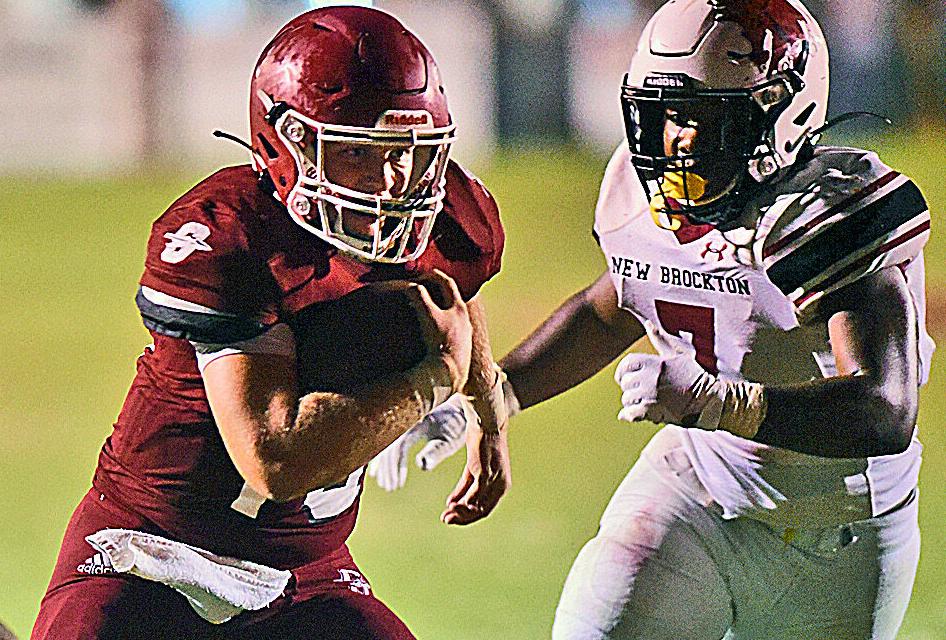 Slocomb quarterback Caulin Thomas runs into the end zone for a score during the third quarter of a game against New Brockton on Friday night in Slocomb.

Jennings was 13-of-22 passing for 275 yards. DaDa Stoudemire had three catches for 159 yards and Jackson Pierce had six catches for 75 yards.

Jennings had an 11-yard touchdown pass to Pierce in the first half, but the big play came on a 90-yard catch and run from Stoudemire. That and a Davis 56-yard scoring run accounted for Opp’s 20 first half points.

Providence actually led early by taking the opening drive 65 yards and scoring when Harrison Mims found Grant Baker for a 12-yard touchdown reception. Opp, however, led 20-6 at the half.

Each team scored once in the third quarter. Opp scored first on a 5-yard touchdown pass by Jennings to Robbie Gafford and Providence scored later on a Christian Durden 22-yard run.

Opp added a 3-yard Davis run and a 17-yard Jennings to Jabarri Hill touchdown pass in the fourth quarter while Durden scored late on a 72-yard burst.

Ariton sprinted to a 36-0 lead by halftime.

Quarterback Ian Senn was 14-of-19 passing for 198 yards and also had touchdown runs of 6 and 5 yards.

Jordan Smith rushed for 98 yards on 12 carries and had touchdown runs of 24 and 22 yards. Decorey Dozier and Terrell Gilbert each added 1-yard touchdown runs and Andyn Garris scored on a 10-yard run.

Garris also made a 23-yard field goal and was 4-of-4 on extra-point kicks.

Defensively for Ariton, C.J. McNabb had seven tackles, Dwayne Riley had five tackles and two sacks and Trevor Johnston had six tackles and a sack. Tuff Hand and Gaige Silavent each recovered a fumble.

Geneva 34, Straughn 21: Timothy McReynolds had 280 all-purpose yards and four touchdowns as the Panthers rolled to the victory.

McReynolds’ touchdowns came on a 24-yard catch from Logan Adams and runs of 1, 4 and 34 yards. He also had a big game defensively with six tackles and an interception.

Kingston Tolbert had a 23-yard touchdown run and had 67 yards rushing for the game.

Dayton Landingham had seven tackles, while Grant Pellot and Walt Watkins each had five. Preston Garner had an interception.

Slocomb 35, New Brockton 7: The RedTops tied an AHSAA state record eight passes and returned two of them for touchdowns in the victory.

Brody Campbell had a 55-yard interception return for a score and Jaylen Nobles returned an interception 72 yards for a touchdown.

Nobles and Campbell each had two interceptions in the game. Braylon Miller, Cade Birge, Asael Morin and Caulin Thomas each had one interception.

The eight interceptions ties the listed record on the AHSAA website, previously set by Talladega County Central against Woodland in 1999.

Defensively for Slocomb, Isai Moren and Michael Ward each had two sacks and Miller had eight tackles and one sack.

Carr rushed for 57 yards on seven carries and Jamarcus Brown for 44 on 14 carries. Whitworth had two receptions for 75 yards.

Greenville 33, Rehobeth 14: Brandon Austin ran in a touchdown and JT Collins threw a touchdown pass to Elijah Holmes for the Rebels, who fell to 2-5 overall and 0-4 in Class 5A, Region 2 with the loss to Greenville (5-1, 3-0).

Eufaula 33, Valley 0: Jamarian Lewis rushed for 212 yards and three touchdowns and threw for 152 yards and one score in the Tigers’ 33-0 Class 6A, Region 2 home win over Valley.

Lewis scored on runs of 81 and 55 yards in the first half as the Tigers built a 19-0 halftime lead. Brando Gonzalez made a 26-yard field goal and Eufaula got a safety when Valley snapped over the punter and out of the end zone.

In the third quarter, Lewis threw a 24-yard TD pass to Birch Cochran, who made a nice nifty move to avoid two defenders to reach the end zone.

Lewis capped the scoring with a 2-yard run in the fourth quarter.

In addition to his field goal, Gonzalez was 4-of-4 on point after kicks.

Defensively, Adrian Calloway was in on eight tackles, including three for losses and one for a quarterback sack. Dominic Floyd and BJ Hunter were in on six tackles, including four solos. Floyd and La’Devin Spencer both had an interception and Al’Tariq Paige recovered a fumble.

Eufaula improved to 3-4 overall and 2-2 in region play.

Cottonwood 36, Houston County 22: Artavious Shipman rushed for 170 yards on 19 carries and scored on touchdown runs of 32 and 4 yards as the Bears got the victory.

Raymon Bryant had 150 yards rushing on 15 carries and had two 5-yard touchdown runs.

Defensively for Cottonwood, Landon Thompson had eight tackles, while C.J. Carroll had six solos and two assists with a sack. Mekhi Anglin and Anthony Pressley each had an interception.

For Houston County, Isaiah McKenzie had touchdown runs of 3 and 4 yards and Sawyer Harris caught a 15-yard TD pass from Kahleel Johnson.

Alex Banks earned 65 yards on 11 carries with a 15-yard TD run, Tristan Smith had 56 yards on four carries with a 13-yard TD run and Derrion Crossley added a 10-yard touchdown run for the Warriors (4-3, 3-1). Justin Stanford recovered a Bullock County fumble in the end zone for the other touchdown.

Lawrence threw an 8-yard TD pass to Jalen Smith in the first quarter and Peyton McBride ran in a two-point conversion to make it 8-7 Yellow Jackets (0-6, 0-4).

The Eagles (4-2, 3-1) then scored 48 straight points before Lawrence threw his second TD pass, an 80 yarder to Braylon Bigham. The Jackets converted the 2-point conversion.

Andalusia 41, Headland 2: The Rams’ lone score was a safety of Andalusia’s quarterback in the end zone in the fourth quarter.

The outcome ruined the debut of interim head coach Reginald Melton, who took over on Friday. The Rams fell to 2-5 overall and to 0-3 in region play.

Kinston 35, Florala 20: Jeb Crosby rushed carries for 167 yards and four touchdowns on 30 carries as the Bulldogs rallied from a 20-7 second-quarter deficit to take a Class 1A, Region 1.

Drew Conner’s 40-yard interception return for a touchdown with a minute left helped sealed the Bulldog win. Kinston improves to 5-2 overall and to 3-1 in region. Florala dropped to 2-4 and 2-2.

Brantley 46, Samson 18: The Tigers lost to Class 1A top-ranked Brantley on the road.

For Goshen defensively, Kadavion Bristow had four tackles and Andrew Galloway had three.

For Barbour County, Larry Wilson led in rushing with 20 yards and Kareem Johnson had one reception for 15 yards.

Defensively, Jaylin Grubbs and Jayvarius Peterson had three tackles each, while Johnson had two tackles plus an interception and Kylan McLeod had two tackles and a fumble recovery.

Barbour County fell to 1-6 overall and 0-4 in region play.

The Knights seized a 14-7 lead after the first quarter, but the Patriots (6-1) scored two touchdowns in both the second and third quarter and another in the fourth quarter.

Pike Lib quarterback Cason Eubanks rushed for 106 yards on 10 carries and threw for 123 yards off 8-of-13 passing, while Zakevin Pennington rushed for 95 yards and three TDs on runs of 7, 2 and 38 yards. Kam Baker added 59 yards rushing and scoring runs of 2 and 1 yard. Ian Foster returned a punt 41 yards for the other score. Cade Renfroe was 6-of-6 on point after kicks.

Scout Kirkland scored both General touchdowns, the first on a 30-yard run, the second on a 4-yard run.

Edgewood 39, Lakeside School 34: Lakeside reached inside the Edgewood 50 final in the final three minutes, but turned it over on downs with 1:50 left and the Wildcats ran out the remaining time.

Thomasville (Ga.) 41, Early County 7: The Bobcats took the early lead and trailed just 20-7 after three quarters before No. 3-ranked Thomasville dominated the rest of the way.

J.D. Holmes scored on a 64-yard run in the opening quarter and Baylen Tedder kicked through the extra point for the early Bobcats’ advantage.

Holmes had 97 yards rushing on 10 carries for the game. Jeremiah Hutchins rushed for 40 yards on 13 tries.

Seminole County dropped to 1-4 on the season.

Providence Christian School quarterback Grant Baker handles an exchange as he looks for running room against the Opp defense on Friday night at Providence.

Slocomb quarterback Caulin Thomas runs into the end zone for a score during the third quarter of a game against New Brockton on Friday night in Slocomb.