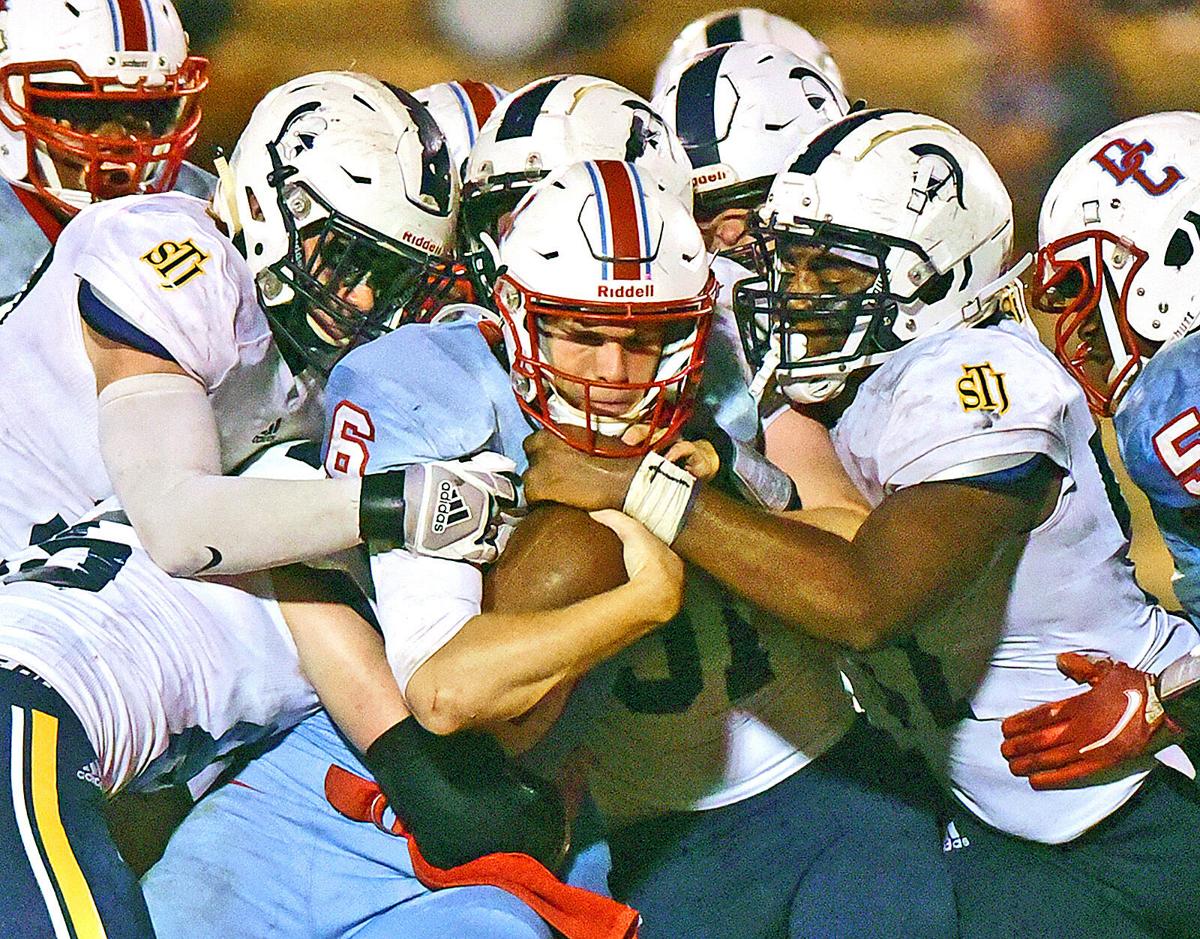 Dale County quarterback Alex Banks fights for yardage during a game against St. James on Friday night at Dale County. 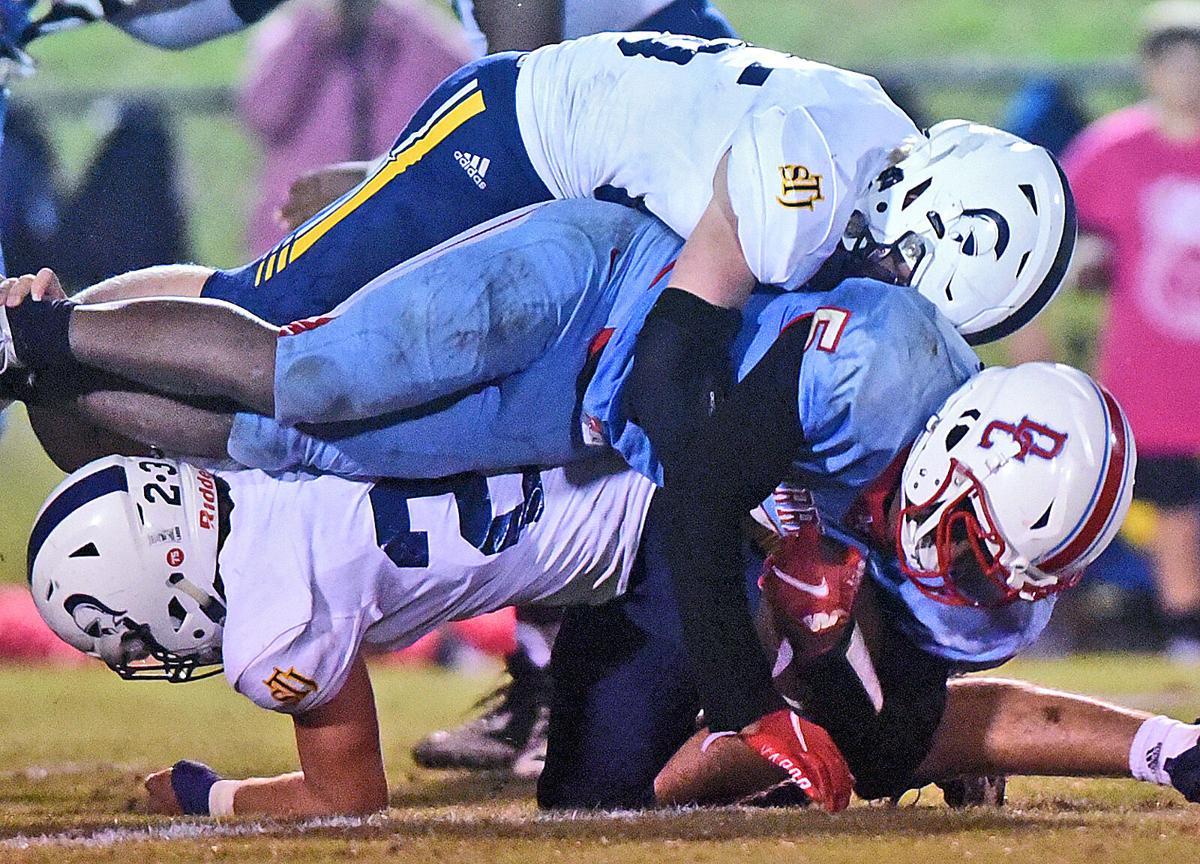 A Dale County running back fights for extra yardage during a game against St. James on Friday night at Dale County.

OPP – Terry Davis rushed for 159 yards and two touchdowns and caught a scoring pass as Opp won a Class 3A, Region 2 showdown over Wicksburg, 49-6, on Friday night in high school football action.

The Bobcats clinched a home playoff berth with the victory and improved to 7-1 overall, 5-0 in the region.

Jordan Kelley had a 99-yard interception return for a touchdown for the Bobcats.

Opp’s Gray Jennings was 8-of-15 passing for 51 yards, including a 34-yard TD pass to Davis. Jennings also rushed for 51 yards on eight carries.

ZaZa Lindsey had two carries for 47 yards and a score and Nathan Smith had three carries for 28 yards and a touchdown for Opp. DaDa Stoudemire had four catches for 22 yards.

Defensively, Cole Jennings had a big night with 10 tackles and a 9-yard sack. Robbie Gafford had seven tackles, Nelson Hall and Zack Hill each had six and Colby Ballard, Will Spurlin and Kelley each recorded five. Zeb Green had four tackles and a fumble recovery.

The Wicksburg touchdown came when Dylan Bayliss recovered a fumble for a touchdown at the end of regulation.

For the Panthers offensively, Jaylen Murry had 66 yards on 18 carries and five catches for 51 yards. Jackson Glover was 7-of-10 passing for 109 yards and Tyler Williams had 49 yards receiving.

Defensively for the Panthers, Mike Albertson, Jacob Cox and Maddox Burkhardt each had five tackles, while Logan Fowler, Charles Snyder and Izaac Murry each had four.

The victory was the first of the year for Northside Methodist after opening with six straight losses. It was also the first win for Toby Greene as NMA’s first-year head coach. New Brockton dropped to 4-4.

The Knights, though, scored four plays into their series on the screen pass to move ahead. The Gamecocks threw three incompletions and had a 9-yard gain on the next series, but it was a yard short of the first down and NMA ran out the remaining 1:14.

Stevens scored on runs of 6 and 4 yards in the first half as the Knights led 13-7 at the break. Fitz Carter converted the first extra-point kick.

Cashin scored the Gamecocks first touchdown on a 10-yard run and Jacob Payton added the point after kick.

For New Brockton, Jamarcus Brown rushed for 135 yards on 23 carries and Cashin 69 on 14 carries. Defensively, Cashin earned seven tackles, including two for losses. Anthony Silar had an interception.

Carver (Montgomery) 20, Eufaula 12: Jamarian Lewis scored on a 1-yard run early in the fourth quarter to pull Eufaula within two, but a two-point conversion failed.

The Tigers were near midfield in the final minute, but Carver’s Jaqueraius Thomas returned an interception 53 yards to snuff the threat out and give the Wolverines a 20-12 lead.

Eufaula opened up a 6-0 lead midway in the second quarter behind field goals of 28 and 22 yards by Brando Gonzalez.

Carver surged ahead at halftime 7-6 and increased the lead to 14-6 in the third quarter.

Lewis rushed for 119 yards on 35 carries with one score and threw for 132 yards off 13-of-26, but threw two interceptions, both by Thomas.

Pike Road 56, Headland 27: Headland had a strong offensive performance against top-ranked Pike Road, but couldn’t contain the Patriots (7-0, 5-0) in the Class 4A, Region 2 game.

Defensively, TJ Buttone and Jaxon Williams had an interception each for Headland.

Andyn Garris had a big night for Ariton (5-0 in Class 2A, Region 2) with a 77-yard punt return for a score, a 22-yard touchdown run and also kicked through 6-of-6 extra point attempts.

Jordan Smith rushed for 98 yards on 10 carries and had touchdown runs of 1 and 17 yards.

Defensively for the Purple Cats, Landon Tyler had a 69-yard interception return for a score. Trevor Johnston, Dwayne Riley and Tuff Hand each had five tackles. Lawson Leger had an interception.

Kobie Stringer threw for 141 yards on 7-of-10 passing with two touchdowns and rushed for 65 on eight carries with a 3-yard touchdown run for the Rebels.

Bryson Hughes caught both touchdown passes from Stringer, one for 25 yards and the other for 54. On the night, Hughes had three catches for 92 yards.

Anthony Pressley returned a kickoff 95 yards for a touchdown and compiled 183 returns yards in the game.

The 82 points is a new school record for points in a game for the Tigers.

Chrystyile Caldwell had a 24-yard TD run and returned an interception 76 yards for a score. Bryson Burks scored on a 37-yard run and caught a 39-yard TD pass from Brayden Johnson.

Geneva County 40, Houston County 21: Emmanuel Henderson rushed for 220 yards on 10 carries with three touchdowns and also threw a touchdown pass for the Bulldogs (4-3, 3-2), who stayed in the upper part of Class 2A, Region 2 with the win.

Henderson scored on runs of 65, 17 and 33 yards and threw a 13-yard touchdown pass to Grayson Bell as time expired to end the first half.

Isaiah Hutcherson had 101 yards rushing on 13 carries and also had eight tackles on defense, one for a loss.

Brandon Andrews had 44 yards rushing on nine tries and scored on touchdown runs of 1 and 4 yards.

Crashade Griffin had 7 ½ tackles and one for loss.

Slocomb 57, Daleville 0: Rashawn Miller rushed for 151 yards on seven carries and scored two touchdowns as the RedTops rolled in the Class 3A, Region 2 game.

Miller’s scores came from runs of 96 yards and 42 yards.

Jaylen Nobles had three touchdowns in the game, on runs of 7, 23 and 15 yards. Nobles also threw a 98-yard touchdown pass to Maddox King.

Asael Morin had eight tackles to lead the way defensively and Junior Eason recovered a fumble.

Kingston Tolbert scored the lone Panthers’ touchdown on a 2-yard run. He had 18 yards rushing for the game.

Greenville 20, Carroll 7: The lone touchdown for the Eagles came on a 27-yard pass from Keyshawn Cole to Takoda McLeod with 11:10 left in the game.

Goshen 15, Pike County 13: Szemerick Andrews rushed for 148 yards on 19 attempts and scored on a 26-yard run to lift Goshen to its first win of the season after seven losses.

Pike County (0-6, 0-4) scored on its first two possessions of the game. Kentavious Thomas raced 45 yards for the first score and Jakelmon Glasco scored on a 1-yard run for the second.

The Bulldogs converted the extra-point kick after the first, but missed on the second, leaving them with a 13-7 lead.

Goshen’s Andrews scored on a 26-yard TD run to tie it, but Andrew Galloway ran in a two-point conversion to put the Eagles up 15-13. The successful conversion proved to be the difference in the game.

Andrews also had seven tackles, while Jacob Saupe led the Eagles with eight.

Alex Banks threw for 316 yards off 20-of-31 passing for Dale County with touchdown passes of 82 yards to Derrion Crossley and 50 yards to Christian Ross. Banks also scored on a 4-yard run and threw a 2-point conversion to Crossley.

Ross caught nine passes for 147 yards with a TD and Crossley caught seven passes for 124 yards and a TD.

Samson 30, Red Level 8: Braxton Brooks rushed for 173 yards and threw for 87 yards off 6-of-8 passing with a touchdown as Samson won a Class 1A, Region 1 game over Red Level.

Josh Lowery rushed for 86 yards on 12 carries, while Gunner Glisson, Brodey Mixon and Mark Rivera all had short TD runs and Zay Peacock caught a 20-yard scoring pass from Brooks.

The Tigers finished with 368 yards rushing and 455 total yards.

McKenzie 26, Kinston 15: Kinston had its school-record tying four-game winning streak snapped by McKenzie in a Class 1A, Region 1 game.

Dillon Mims caught a 45-yard pass and Conner Hutto caught a 20-yard score, both coming from Justin Murphy. Scout Kirkland scored on an 8-yard run for the other TD for ACA (2-5, 1-2). Hutto, Mims and Jaxon Hendrich all caught a 2-point conversion pass.

Seminole County (Ga.) 22, Randolph-Clay 6: Zay Martin rushed for two touchdowns and Nick Cull added another as the Indians defeated the Red Devils in a Region 1-A game.

Cull, an Ole Miss commitment, also had an interception for Seminole County (2-4, 1-0).

Dale County quarterback Alex Banks fights for yardage during a game against St. James on Friday night at Dale County.

A Dale County running back fights for extra yardage during a game against St. James on Friday night at Dale County.