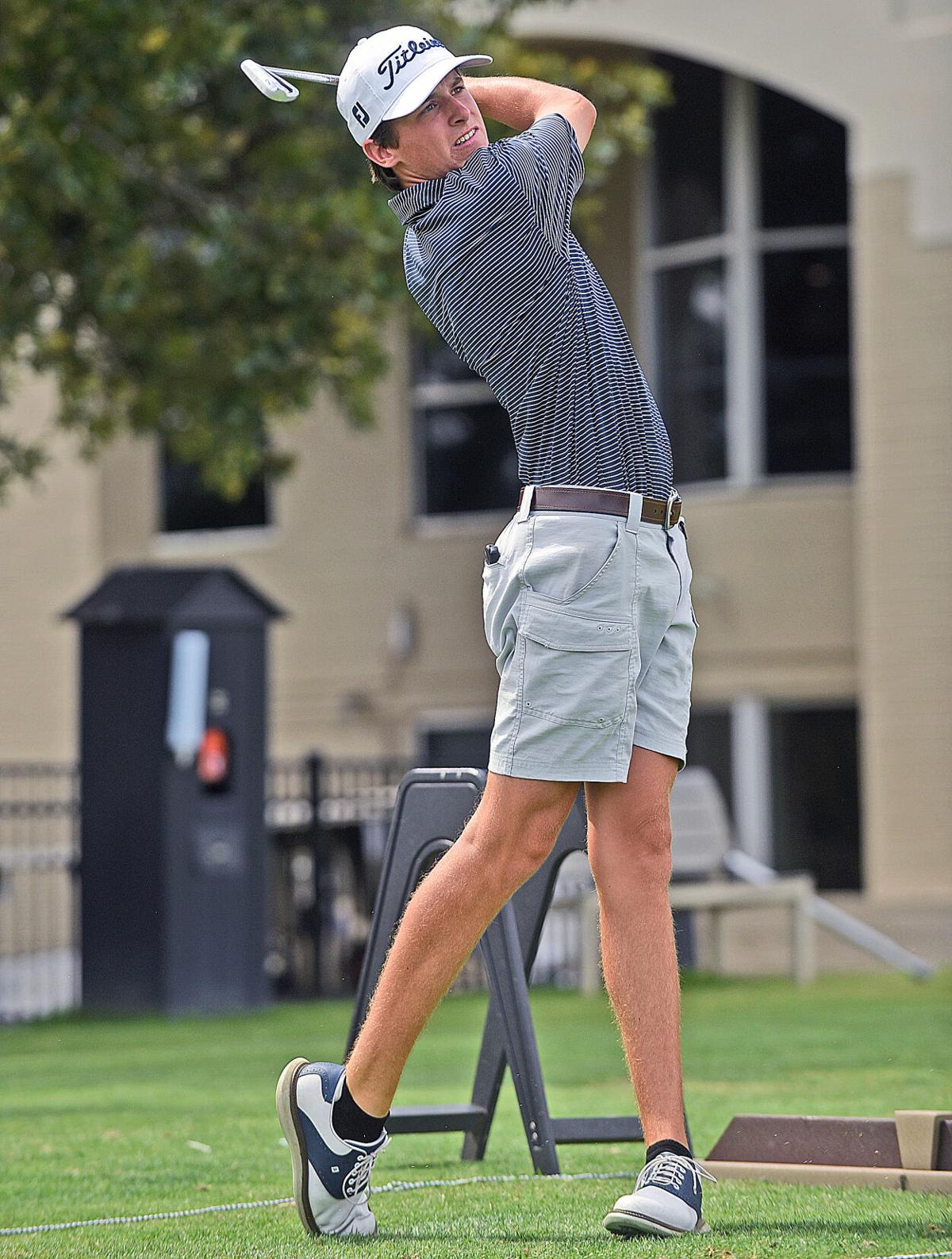 Dothan Eagle Golfer of the Year Brantley Scott practices on the range at the Dothan Country Club on Friday. 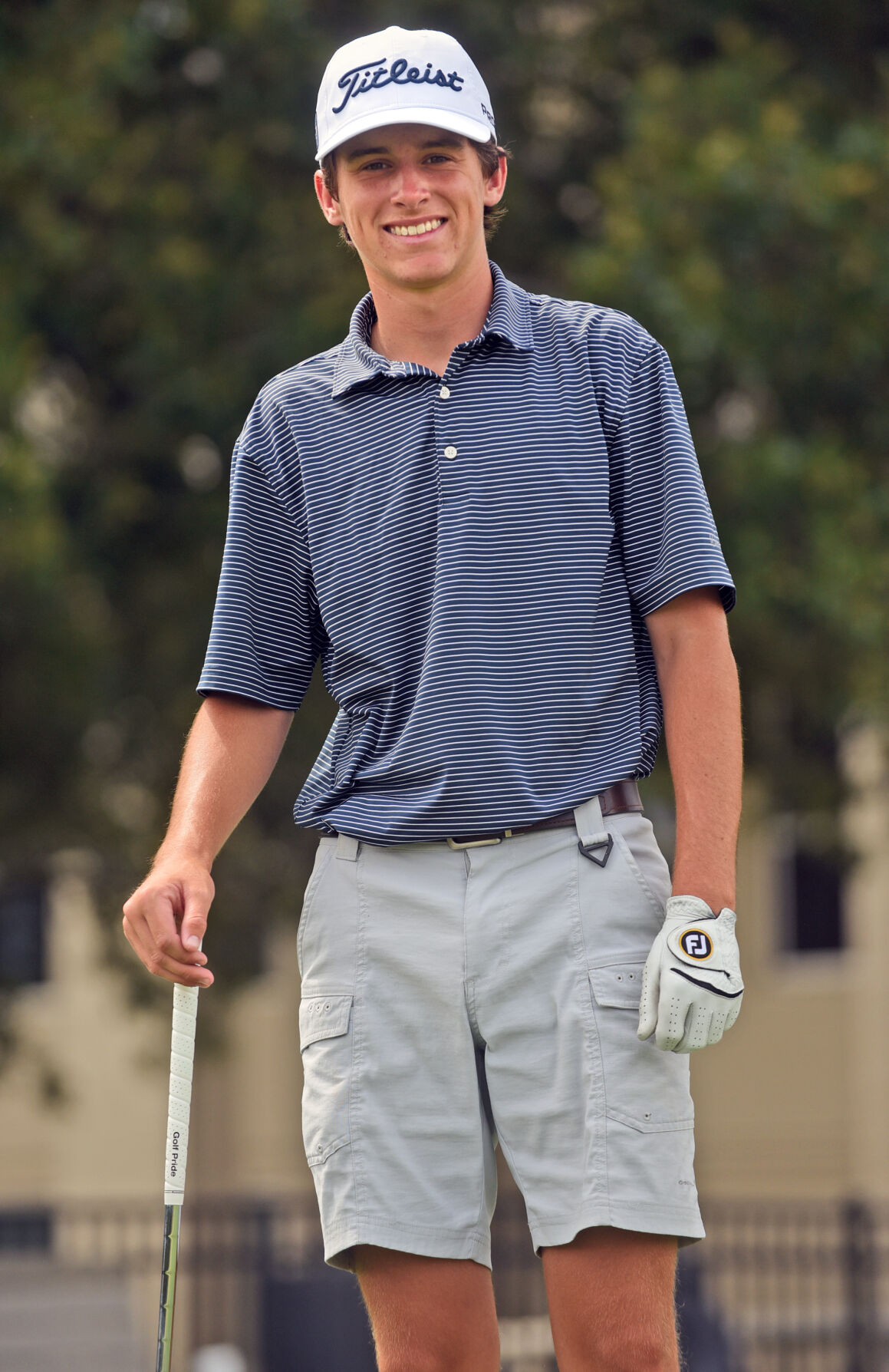 Brantley Scott poses for a shot at the Dothan Country Club.

Rehobeth’s Brantley Scott set a couple of goals for his high school senior year on the golf course.

“Honestly to play well,” Scott said. “I wanted a scoring average under 70 and I am pretty sure I accomplished that. Obviously I wanted to win state (as an individual). We also went to state (as a team), so it was a pretty successful season.”

Scott checked off all three – and something even more special.

The Rebel senior earned a perfect season, winning all 13 meets he competed in, including the AHSAA Class 5A state championships, while helping Rehobeth capture a school-best third-place state finish. Scott played under par golf in 10 of the 13 events and was even par in two others in earning a 69.6 stroke average.

For his unbeaten success and strong stroke average, Scott has been named the 2021 Dothan Eagle Golfer of the Year.

“It’s awesome,” Scott of being named golfer of the year. “Glad to see my hard work paid off.”

While he had goals for stroke average and taking the state crown, winning every tournament was not on the radar of the Troy signee until winning a highly-competitive Raider-Eagle Tournament at the Dothan Country Club on April 13.

He opened the state tournament at Mobile’s Robert Trent Jones’ Magnolia Grove course with a 4-under-par 67 and a one-stroke lead over Guntersville’s Paul Bruce. The second day of the tournament was rained out, leaving the first-round scores as the final results with Scott on top in his 13th and final event of the high schools season.

“To do that was pretty awesome to me,” Scott said of going unbeaten, adding it was a “huge accomplishment.”

He also started the strong season with a highly-competitive event – the David Miller Memorial Tournament in Mobile that featured a lot of the top golfers in all classes. He finished with a winning total of 1-under 71 at that meet.

The majority of the tournaments after that were local ones in Dothan at Highland Oaks or the Dothan Country Club, or in Enterprise at the Enterprise Country Club or Silver Wings (Fort Rucker). One other meet was at the Troy Country Club.

Rehobeth head coach Brandon Sunday said those in the state now know where Rehobeth is located, thanks mainly to Scott.

“He has pretty much put Rehobeth on the (golf) map is what he has done,” Sunday said. “He worked hard all the time and for him to win a state championship his senior year was huge for him and for the school.”

Scott’s success, as well as Rehobeth’s team appearance at the state tournament, has already had an impact on golf in the community, said Sunday.

On Monday, Sunday had a golf camp at Dothan National for kids 7-16-years old. There were more campers there than he expected.

“I was hoping for 10 and ended up getting 35, all from Rehobeth,” Sunday said. “I think it is directly related to it (the success) to be honest with you with all the publicity we got and Brantley winning it.”

Scott said the key to his unbeaten season was a matter of continued practice.

“Just making sure my game was sharp, a lot of practice, a lot of hours and dedication for sure,” Scott said. “I know this is what I want to do for a living so I knew this is what it was going to take to make it happen. It is just a confidence-booster to go undefeated.”

On the course, Scott said putting was vital to his success.

“In the past year, my putting has come up clutch when I needed it,” Scott said. “In these bigger tournaments, I have gotten the putter hot many times. You don’t play well if you don’t putt good. The putter has to be there.”

He said the strong putting actually began in late September when he played in the Southern Junior Harris English Invitational at Glen Aren Country Club in Thomasville, Ga.

“I shot 28 on the back nine,” Scott said. “My putter has not been hot like that ever. Something just clicked that day and they (putts) started falling. I was like, ‘You can make 20-footers. I can get the ball in the hole.’”

Sunday said Scott’s short game is as good as anybody’s in the state.

“His biggest attribute, in my opinion, is his short game around the green in pitching, getting out of sand and getting out of trouble,” Sunday said. “He does a real good at that.

“Really everything he does is good, but his short game around the green is really good. He will hit one in the sand and for someone else it might end be a bogey, but he gets it up there close and saves par.”

With his high school season completed, Scott is now preparing for summer events. He plays this Wednesday through Saturday in the Alabama State Amateur at the Pine Tree Country Club in Birmingham and then at the Southern Juniors at the Jack Nicklaus’ designed Great Waters Plantation in Eatonton, Ga., before playing in his hometown Future Masters at the Dothan Country Club June 24-26.

“I would love to bring home the trophy (at Future Masters),” Scott said.

After the summer, the 5-foot-11, 140-pound Scott will report in the fall to begin his college career at Troy.

Lebron James changing his number because of Space Jam

Lebron James changing his number because of Space Jam

Fresh off being hired, new Samson basketball coaches Jacob Nawlin and Josh Blalock have quickly gotten to work in their new roles.

As minister of Highland Home Church of Christ, Dean Kelly is used to leading the congregation and overseeing activities.

The church sermon before the finals of the 61st Masters Water Ski & Wakeboard Tournament in Pine Mountain, Ga., resonated with Dothan’s Ma…

Dothan Eagle Golfer of the Year Brantley Scott practices on the range at the Dothan Country Club on Friday.

Brantley Scott poses for a shot at the Dothan Country Club.