Free and open election coverage when you register today!
From now through Nov. 7, we're providing FREE access to election coverage, made possible by our subscribers. You can help support our work by becoming a subscriber today.
Log in Sign up {{featured_button_text}}
You are the owner of this article.
Edit Article Add New Article
You have permission to edit this article.
Edit

Democrats swing behind bipartisan virus aid bill; Biden calls it 'down payment' ahead of inauguration 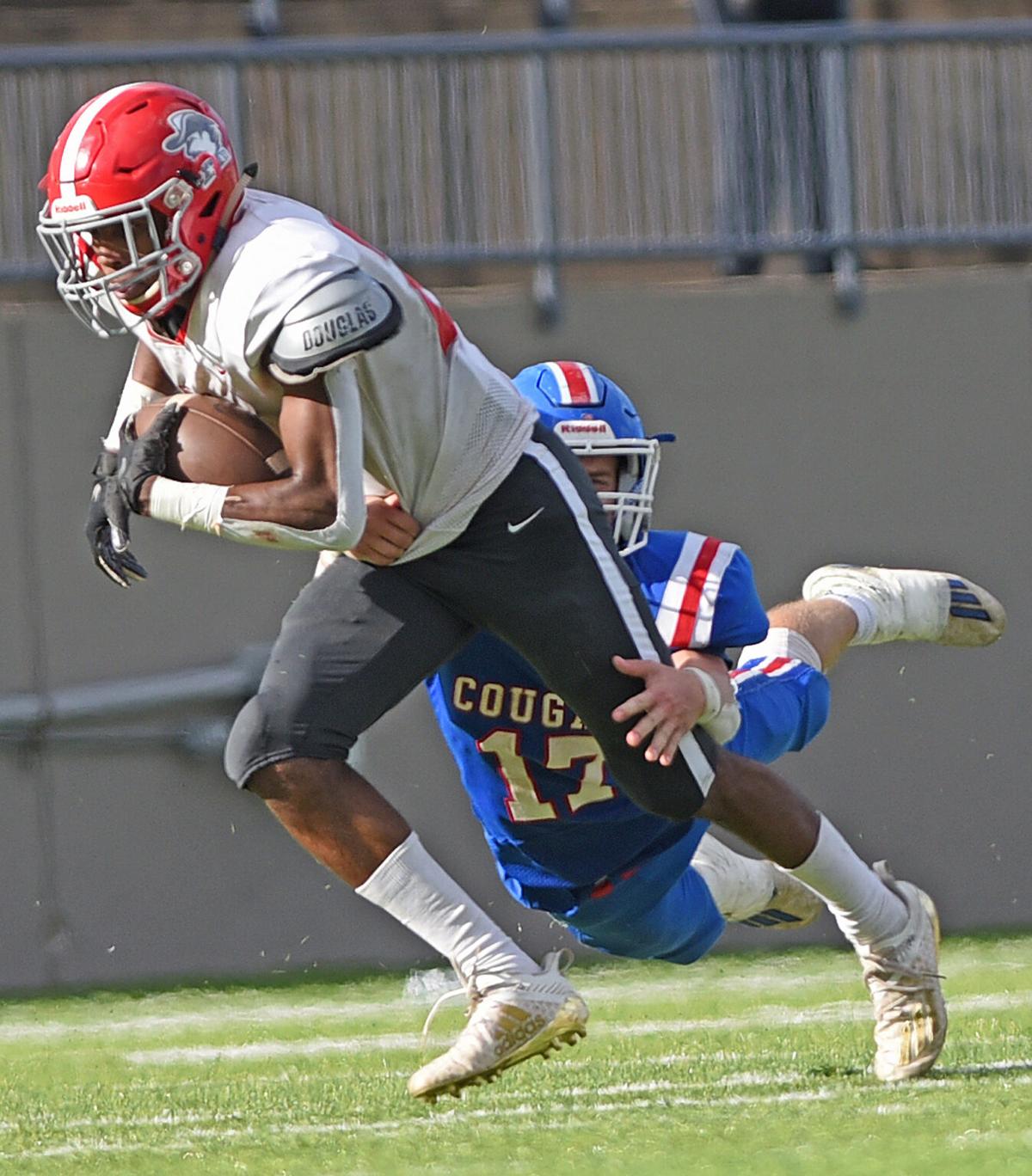 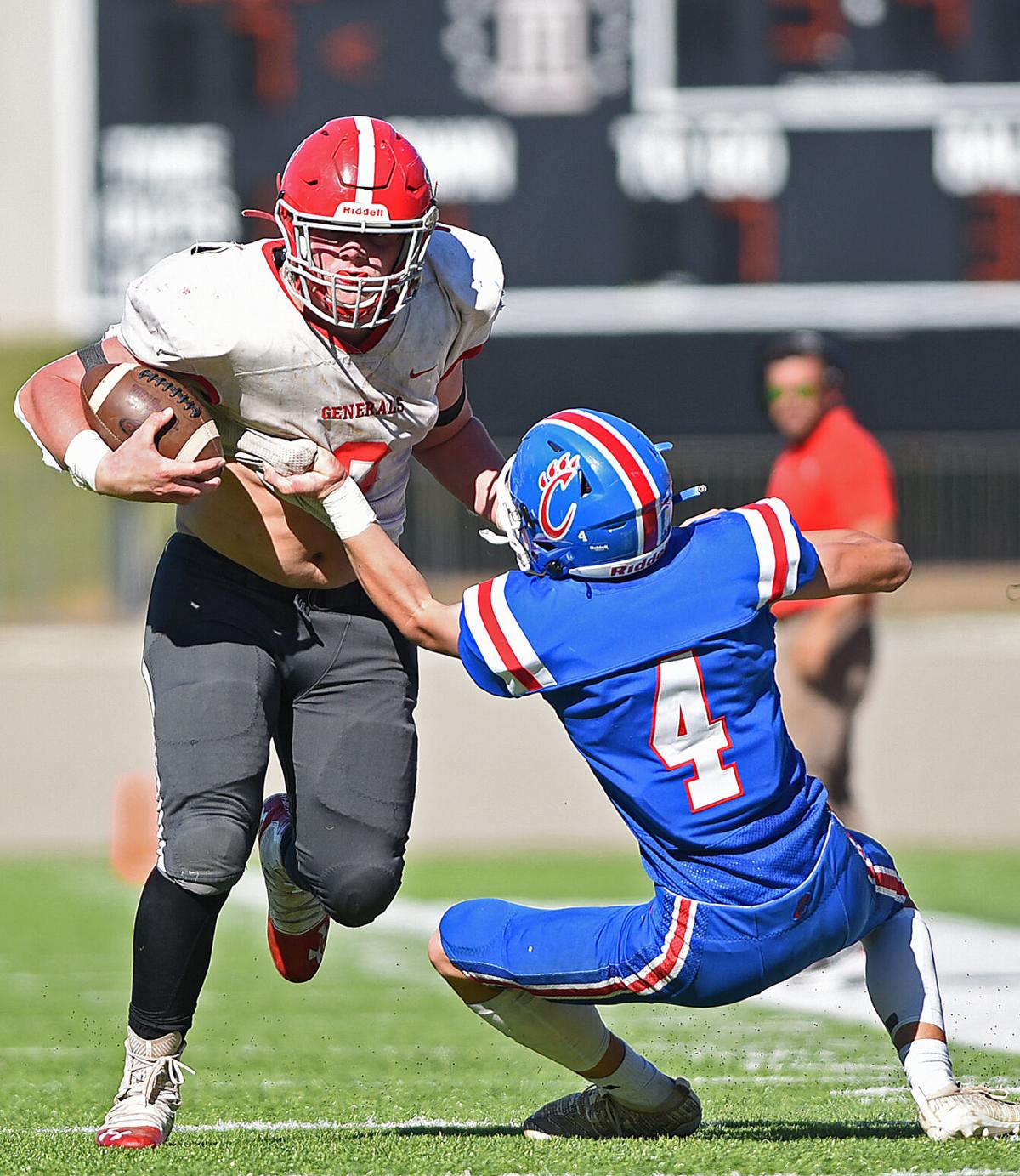 MONTGOMERY - In head coach Ashley Carlisle’s words, the Abbeville Christian Generals had a lot of fun during the first half of Friday’s AISA Class A state championship game.

Unfortunately, the second half was complete misery.

Four second-half turnovers, including one returned for a touchdown early in the third quarter, and a bruising Crenshaw Christian team proved to be too much for a banged-up General team.

The Cougars, under the direction of Wiregrass Sports Hall of Fame coach Wayne Grant, scored 34 second-half points to pull away for a 40-20 win over ACA at Cramton Bowl.

Abbeville Christian led 14-6 at halftime and 20-19 midway in the third quarter, but ran out of gas, said Carlisle, and the Cougars scored the final three touchdowns to pull away.

The title was the fifth in school history for Crenshaw (9-3), but the first since 1997. They also won titles in 1975 and 1993. It was the sixth state title for Grant as a head coach, matching five he had at Pike County. He was an assistant coach on a 2009 Pike Liberal state championship team.

Abbeville Christian fell in a bid for its first state title since 2015, but the Generals did return home with a state runner-up trophy. The Generals finished 10-3, their best win total since 2015 and a marked improvement from last year’s 3-8 record.

“It was a great experience and maybe some of our younger kids can build on it,” Carlisle said of the opportunity to play in the state finals. “The older kids, it will be something they will remember forever.”

The Generals turned it over five times overall, including the four in the second half. The Cougars converted those into 33 points. ACA also had 10 penalties for 72 yards, all in the first three quarters.

“I said going in we had to play clean, but we didn’t,” Carlisle said. “We had a couple of touchdowns called back (on penalties) and the turnover (to start second half) set the tone and the back-to-back touchdowns really got to us. Couple that with us being banged up coming in and had more injuries to it, we ran out of gas in the fourth quarter.”

The Generals also couldn’t contain Crenshaw’s running game in the second half. After earning just 82 yards on 19 carries in the first half against the ACA defense, the Cougars amassed 190 yards on 18 carries in the final two quarters.

John David Taylor led the assault, finishing with 180 yards on 17 carries with three touchdowns, the last two coming in the fourth quarter to help Crenshaw extend the margin. Quarterback Demetric Toney added 63 yards on nine carries and Christian Holloway had 23 on just seven carries with one TD.

Toney added 94 yards on 6-of-13 passing with one touchdown for Crenshaw, which finished with 366 total yards on 50 plays.

The General offense earned 290 yards on 59 plays, including 184 in the air. Quarterback Ryan Ledford threw for 167 of the yards off 12-of-21 passes with a 55-yard TD pass to Dre Cobb. Jackson Blalock was 3-of-4 passing for 17 yards, including an 8-yard pass to Brandon Early.

ACA actually started the second half with two turnovers and Crenshaw capitalized on both to turn the Generals’ 14-6 halftime margin to a 19-14 Cougar lead.

On the second half’s first series, ACA fumbled on a handoff exchange and the Cougars recovered at the Generals 24. Two plays later, Toney fired a pass outside to Holloway, who made three Generals defenders miss him down the sideline, including cutting inside on the last one, on way to completing a 17-yard TD pass. Blalock prevented Toney from scoring on a two-point conversion.

Three plays into ACA’s next offensive series, disaster struck again. On a play to the left, Blalock tried to make a late pitch as he was hit and the ball popped back on the ground and Crenshaw defensive lineman Tymon Knighten scooped it up and returned it 49 yards for a touchdown. The extra-point kick made it 19-14 with 8:40 to go in the third quarter.

The Generals, though, were able to overcome it six plays later as Ledford fired to Cobb on a crossing pattern. After catching it, Cobb shot through a gap of Cougar defenders in the middle of the field and sprinted to paydirt on a 55-yard throw and catch touchdown. A try for two failed, but ACA led 20-19 with 6:53 left.

Crenshaw answered on the ensuing possession to wrestle the lead away – for good as it turned out. Holloway scored on a 7-yard run off the left side with 5:20 left and Logan Owens ran in a two-point conversion to make it 27-20 CCA.

Abbeville Christian, behind two first downs, including an 18-yard Ledford to Cobb pass, moved to the Crenshaw 30 but turned it over on downs with a fourth-down incompletion.

The turnover bug then bit ACA again early in the fourth quarter.

A fumble on the second play of the fourth quarter was cashed in by Crenshaw in four plays on an 8-yard run by Taylor. Holloway converted the extra-point kick to make it 34-20 with 9:44 left in the game.

The Generals had a scary moment the play before the touchdown as Early was hurt and attended to on the field for several minutes. He left on a stretcher to a local hospital, but Carlisle, speaking after the game, said it was a precautionary measure. He was released less than two hours after the game.

“He got a stinger early in the week in practice,” Carlisle said. “It was just a precautionary thing. He was moving, but he was having tingling in his arms and when you have tingling, it throws up a caution flag.”

Nagging injuries were a problem for ACA in the second half as Cobb kept coming up lame with a hamstring injury and Blalock had to come out at one point because of a recurring ankle injury he has dealt with the last few games.

Three plays after the Crenshaw touchdown, Ledford tried to pass deep to the left side, but Crenshaw’s Jack Dillon Hewitt intercepted it and returned it to the 30. On the ensuing play, Taylor zipped into a hole in the middle and raced 70 yards for a game-sealing touchdown to make it 40-20 with 8:12 left.

Both teams came out with trick plays early in the game with both utilizing a wide receiver pass. ACA had its version intercepted, while Crenshaw had an illegal man downfield on its try.

Moments after the Crenshaw attempt, the Cougars moved to the ACA 16, but Dillon Mims intercepted a pass at the 6 and returned it to the 24.

On the first play after the pick, Ledford went deep and connected with Eli Seay on a 53-yard completion. Three plays later, Early scored up the middle on a 4-yard run. Cole Goodson added the extra-point kick to make it 7-0 ACA with 5:40 to go in the first.

Crenshaw answered with a 10-play, 57-yard scoring drive capped by an 11-yard TD run by Taylor. The extra point was partly blocked by Cobb and fell short, keeping Abbeville Christian up 7-6 with 1:02 left in the opening quarter.

The Generals then delivered the most impressive drive of the game – a 16-play, 51-yard scoring march that featured four fourth-down conversions. The touchdown came on one of those conversions when Blalock, on a speed sweep, went wide to the left before throwing in the end zone to Early for an 8-yard TD pass. Goodson added the point after to make it 14-6 with 59 seconds left in the half.

Crenshaw, behind a 39-yard kickoff return to the 40 and two 14-yard plays, moved to the ACA 17 in the quarter’s final seconds, but the Generals broke up a fourth-down pass on the half’s final play to deny the scoring opportunity.