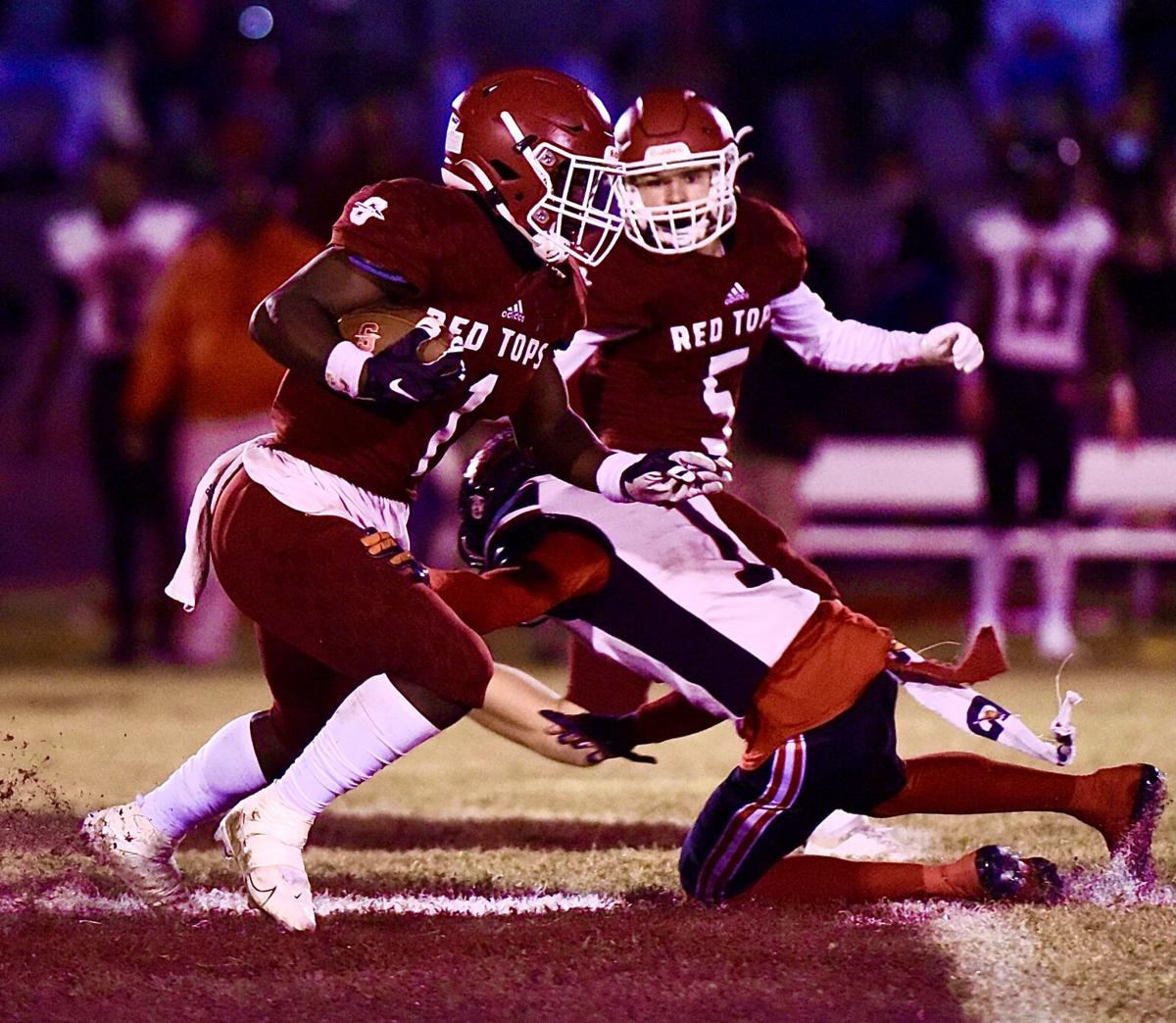 Slocomb running back Rashawn Miller runs for his second score during the first quarter against Hillcrest-Evergreen in the second round of the Class 3A playoffs on Friday night in Slocomb. 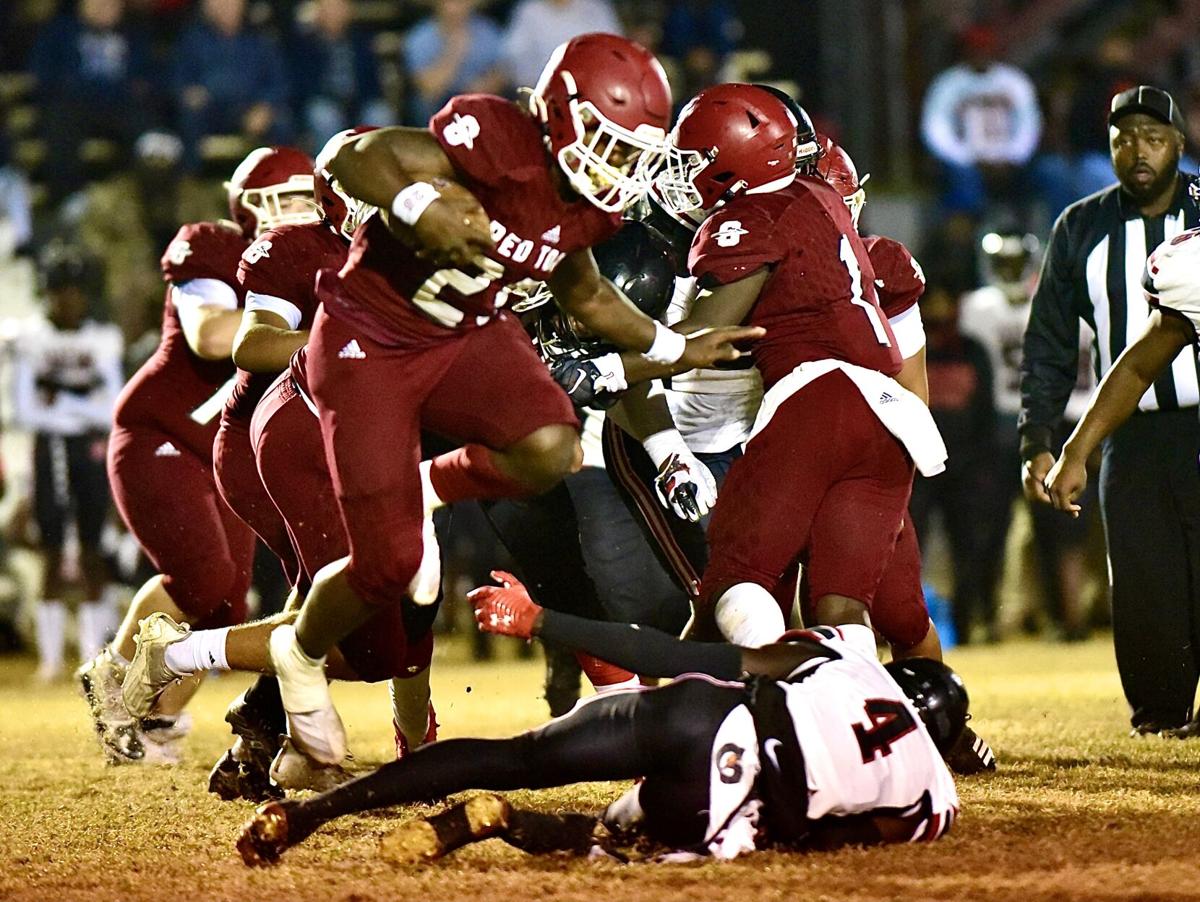 Slocomb quarterback Jaylen Nobles leaps over a defender for a gain during the first quarter against Hillcrest-Evergreen.

SLOCOMB — Big plays powered Slocomb to a 37-12 lead midway in the third quarter.

The RedTops, though, couldn’t maintain control in the final 17-plus minutes.

The Hillcrest of Evergreen Jaguars scored 27 unanswered points to surge to the lead and a last-play field goal attempt by Slocomb was partly blocked and fell well short as the RedTops fell 39-37 in a Class 3A second-round playoff game at Newton-Tew Field.

The outcome ended Slocomb’s year with an 8-4 record and a second-round appearance for the second straight season. The RedTops overcame a 2-3 start with six straight wins prior to Friday’s loss.

“I am so proud of these boys as we got off to a slow start,” Slocomb head coach Richard Tisdale said. “We had some COVID stuff early, had some linemen injured over and over, lost our quarterback Caulin (Thomas), but the second half of the season they never quit to win back-to-back region titles. We hadn’t done that since 2002-03.”

Hillcrest, 7-5 and winners of five of its last six games, travels to top-ranked Montgomery Catholic for the third round of the playoffs.

The Jaguars scored on four of their last five possessions after Slocomb opened up its 25-point lead. Senior running back Willis Likely scored on runs of 3 and 59 yards and quarterback Jermonte Stallworth added a 3-yard run and a 1-yard QB sneak to cap those drives. The 59-yard run capped a three-play, 97-yard drive, aided also by a 15-yard facemask penalty by Slocomb.

Likely earned 119 of his 182 second-half rushing yards during the four possessions and finished the night with 245 yards on 31 carries.

“We knew they could (come back),” Tisdale said. “That running back is so stinking good and their defense is good. We hit them on some big plays and we knew we had to big-play them. We knew we were not going to drive on these guys. In the fourth quarter, we were hoping to get two first downs to eat that clock up so they don’t have that last three minutes, but we couldn’t get over the hump.”

In the last 15 minutes, Slocomb had three straight three-and-out series and lost another series on an onsides kick recovery by Hillcrest.

Stallworth’s quarterback sneak put the Jaguars in front with 1:42 to go. However, the extra point failed, leaving it 39-37.

After a double penalty on the first kickoff (holding on Slocomb/facemask on Hillcrest), the RedTops’ Brody Campbell returned the ensuing kickoff to the 39. Five plays later, including scrambles of 15 and 18 yards by quarterback Jaylen Nobles, Slocomb had it at the Hillcrest 25 with 40.7 seconds left.

Now in field goal range, Tisdale had Nobles go off the right edge for 3 yards before losing a yard and then calling timeout with 1.8 seconds left after running the clock down. Tisdale said he didn’t want to risk losing yardage off a Jaguar blitz with another play, possibly making a field goal attempt longer or out of range.

After a timeout by both teams, the latter by Slocomb after trying to draw Hillcrest offsides, Slocomb attempted a 40-yard field goal from kicker Asael Morin, who boomed 44- and 40-yard kicks in last week’s opening-round playoff win and was 4-of-4 on field goals during the season.

The attempt though was partly deflected at the line by the Jaguars’ Korian Salter and fell harmlessly short of the goal post.

“I love Asael Morin like he is my own son,” Tisdale said. “I would do it again. You give me 50 chances, I would do it again and he would make the kick 49 times. There is not another player I would put the game on his shoulder before Asael.”

The RedTops capitalized on big plays and two Jaguar fumbles to take a 15-6 halftime lead to 37-12 midway in the third quarter.

On the second half’s opening kickoff, Braylon Miller stripped Kesharvis James during the return and recovered the fumble, setting Slocomb up at the 35.

Six plays later, Nobles went up the middle on a 12-yard scoring run. Morin added the point after attempt off Campbell’s hold to make it 22-6.

The Jaguars answered with a Likely 4-yard scoring run with 6:50 left in the third quarter.

The next 1:13 proved to a RedTop highlight reel.

Two plays into the ensuing series, Nobles fired deep to the left and hit wide open receiver Maddox King, who snared the reception and turned on the speed, diving over at the goal line to complete a 55-yard scoring strike. After an offside penalty on Hillcrest, Nobles scored on a two-point conversion, making it 30-12 with 6:08 left.

On the Jaguars’ first play, Likely fumbled at the end of a 20-yard run and Rashawn Miller recovered for Slocomb at the RedTop 39.

On the next play, Nobles, as he did several times in the game, moved forward like he was going to run, but instead quickly fired a pass. This one was to the right side to Josh King, who sped down the field to complete a 61-yard TD pass. Morin’s PAT made it 37-12 with 5:37 to go.

Hillcrest’s offense, though, kept rolling, while Slocomb’s offense struggled, going three straight three-and-out. The Jaguars also recovered an onside kick after closing the gap to 37-33 with 9:43 left. However, the RedTop defense held after the onside kick, but the offense went three-and-out and had to punt back to Hillcrest with 6:21 left.

The Jaguars then drove 56 yards in nine plays capped by the QB sneak by Stallworth to go ahead with 1:42 left.

Slocomb earned a 15-0 first-quarter lead behind two big scoring plays by Rashawn Miller – a 63-yard screen pass from Nobles and a 62-yard run. Nobles scored on a two-point conversion after an offside penalty on Hillcrest after the first score.

A 46-yard Stallworth to Jalen Likely scoring pass in the second quarter cut the margin to 15-6, but Rashawn Miller blocked the extra-point attempt.

Nobles threw for 221 yards off 8-of-17 attempts with a season-high three touchdown passes. He also threw one interception. Josh King had three receptions for 91 yards.

The RedTop running game had a tough time against a Hillcrest defense that featured a big front and eight players in the box. Slocomb managed just 138 yards on 31 carries with almost half coming on Rashawn Miller’s long TD run. Miller had 75 yards overall and Nobles 60.

Nobles led the Slocomb defense with 11 tackles and Braylon Miller had 10 stops.

Slocomb’s defense contained Willis Likely in the first half, but the Jaguar standout, behind a big offensive line, including 6-foot-2, 357-pound Brandon Lusane, broke loose in the second half.

“We tackled that joker pretty good in the first half, but as we got tired, he got stronger,” Tisdale said. “Our D-line is in there weighing 160 fighting their rears off against those big guys.

“We were getting run-throughs (into the backfield early), so their linemen went foot to foot with those big linemen and it took away our run-throughs and he would get behind them and find a crease. Several times we were making contact in the backfield, but it was just an arm or hand after we started sending guys off the edge. It was not enough to get him down.”

World Cup 2022: Which teams qualify for the Qatar finals?

World Cup 2022: Which teams qualify for the Qatar finals?

Both the Eufaula girls and boys teams won opening-round games on Monday at the Spartan Turkey Jam Tournament in Mountain Brook.

Turkey Classic set at Dothan Civic for Monday and Tuesday

All 10 players for Abbeville scored during an 81-42 win over Barbour County on Friday night in high school basketball action.

Wicksburg softball standout Ashton White had plans for college mostly figured out for some time.

Slocomb running back Rashawn Miller runs for his second score during the first quarter against Hillcrest-Evergreen in the second round of the Class 3A playoffs on Friday night in Slocomb.

Slocomb quarterback Jaylen Nobles leaps over a defender for a gain during the first quarter against Hillcrest-Evergreen.