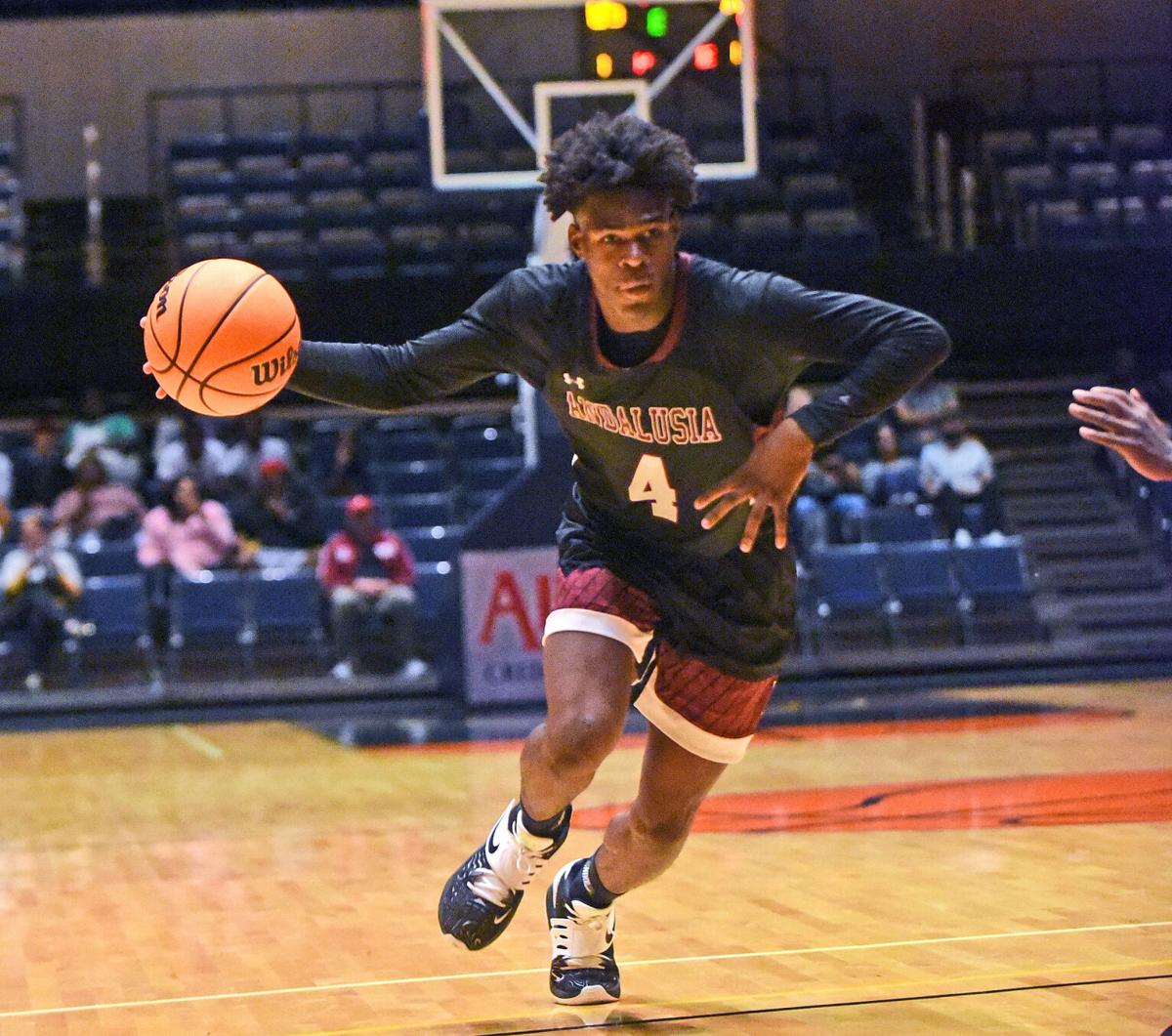 Andalusia’s Tevin Sigers drives to the basket during a game against Florala in the Turkey Classic Monday afternoon at the Dothan Civic Center. 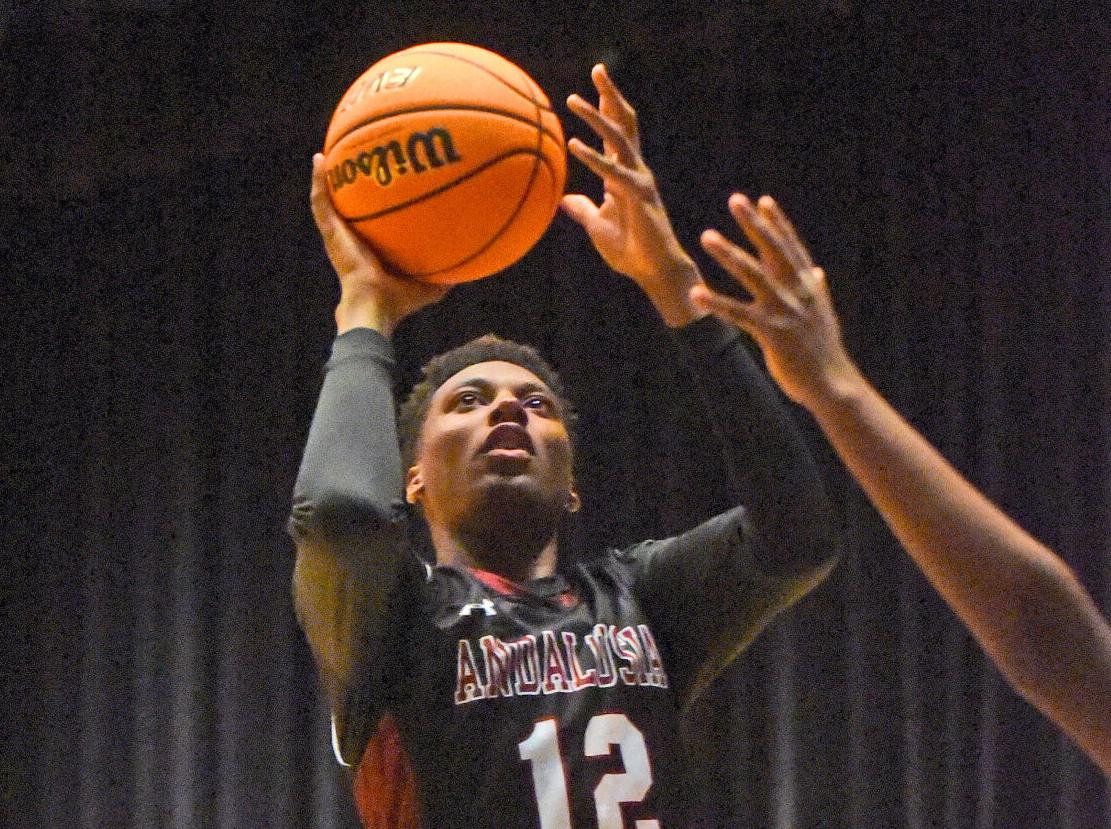 Andalusia's Jordan Stallworth fires up a shot during a game against Florala in the Turkey Classic Monday afternoon at the Dothan Civic Center.

Monday afternoon at the Dothan Civic Center in the Turkey Classic, it was obvious from the outset how the Bulldogs intend to play.

“We definitely want to get up and down the floor and cause havoc,” Mickles said.

Andalusia did enough of that to upend Florala 54-47 in the first game of the eight-team, single-elimination tournament.

The Bulldogs will next play on Tuesday at 10 a.m. in the semifinals against Malone, a 57-45 winner over Highland Home in the third game of the day.

In the second game on Monday, Georgiana broke away from LaFayette in the second half in rolling to a 70-55 victory. Georgiana advances to the semifinals Tuesday at noon to play Cottonwood, a 62-45 winner over G.W. Long in the final game of the night.

The championship game will be played Tuesday afternoon at 3, with the winner filling the final spot in the Downtown Dothan Hoops Classic, a 16-team tournament Dec. 27-31.

In the opener, with Florala displaying a methodical motion offense with set plays, Andalusia preferred to push the ball up the court when the opportunity presented itself.

The formula paid off as the Bulldogs converted a number of fast-break opportunities in gaining the victory.

“This is my first year here, so I really wanted to set our tempo and get the guys on the style of basketball we want to play,” Mickles said. “We really weren’t worried too much with what they did offensively or defensively. We just wanted to be ourselves and continue to get better.”

With the Andalusia football team advancing to the Class 5A semifinals this Friday, the Bulldogs weren’t at full strength.

“I’m missing like four guys from football and we’re just trying to put it all together,” Mickles said. “Those guys did a great job today and we look to just build on that.”

Mickles, who previously was head coach at Greenville for six years, said he always wanted to be part of the Hoops Classic and jumped at the opportunity for Andalusia to have a chance by way of this week’s play-in tournament.

“I’ve always wanted to get in this tournament (Hoops Classic) since I was in Greenville to get the experience of playing on this court,” Mickles said. “It’s just a great event.”

The game was tight in the early going and tied 21-21 following an inside basket by Florala’s Rayshon Coleman.

A made 3-pointer by Cammeyun Love put the Bulldogs back on top and Christian Sheridan scored inside to make it a 29-24 Andalusia lead at halftime.

The Bulldogs came out strong in the second half in building a 38-28 advantage when Tyler Sigers attacked the goal on a strong drive, scoring on a layup. The Bulldogs led 43-35 going into the fourth quarter.

Midway through the final quarter, Tyler Sigers made a steal and went the length of the court for a dunk to put Andalusia up 49-37.

But Florala never panicked and continued to run its offense and get up good shots behind the direction of head coach Troy Turman.

After an inside basket by Andalusia’s Hudson Kelly made it 54-39, Florala would score the remaining points of the game to make the final very respectable, starting when Coleman made two free throws and scored down low.

Andalusia was led by Tevin and Tyler Sigers with 13 points each, while Brendan Davison added 10.

Georgiana 70, LaFayette 55: The Panthers came out on fire in the second half in taking control of the game.

Leading 34-27 at the break, Georgiana outscored LaFayette 9-2 in building a quick 43-29 advantage, thanks in part to some aggressive defensive pressure that led to LaFayette turnovers.

The first three baskets in the run came on an inside basket by Zach Boggan, a 3-pointer from the wing by Jacob Lowery and a steal and slam dunk by Amari Feagin in displaying the versatility of the Panthers.

The Panthers built a 54-40 lead by the end of the third quarter and were never threatened the rest of the way.

Feagin led Georgiana with 17 points, while Josh Sims added 13 and Cobie Morgan 11 in what was a balanced scoring attack.

LaFayette was led by Vinay Singh with 20 and Antavious Woody with 12.

Malone (Fla.) 57, Highland Home 45: The Tigers scored the first 10 points of the second half after leading by just one at the break and held on for the victory.

Highland Home came fighting back and pulled within 37-33 on a tip in by Greg Tate before J.D. Gibson answered with a 3-pointer for Malone. The Tigers led 40-35 going into the final period.

Daniels hit a 3-pointer to begin the fourth quarter and followed that up with a made leaner in the lane as Malone extended the lead to 10 with 6:15 left.

The Tigers continued the onslaught with a driving basket by Javier McClennon and a 3-pointer by Gibson before Highland Home got its first basket of the quarter on a follow up by Ford Sloan.

Malone was led by Welch and Daniels with 12 points each, while Wilson added 11.

Cottonwood 62, G.W. Long 45: The Bears got off to a blazing start, leading 14-5 after the first quarter, in rolling to the win.

Cottonwood used tenacious defense along with its size and quickness to control the backboards and make shots tough on the Rebels in the early going.

Cottonwood drained six 3-pointers in the first half, getting two of them from Raymond Bryant and one 3-pointer each from Christian Williams, Jordan Williams, Harrison Lewis and Tyshaun Cunningham.

G.W. Long played tough in the third quarter and was within 40-32 as Blayne McDaniel drove the lane and scored.

Bryant scored the next two baskets as Cottonwood led 44-32 before Kobie Stringer drained a 3-pointer from the corner to keep G.W. Long within 44-35 with 2:06 left in the third. The Bears led 48-35 after three quarters.

Bryant hit a 3-pointer from the corner in the first two minutes of the fourth quarter to push Cottonwood’s lead to 53-35.

Andalusia’s Tevin Sigers drives to the basket during a game against Florala in the Turkey Classic Monday afternoon at the Dothan Civic Center.

Andalusia's Jordan Stallworth fires up a shot during a game against Florala in the Turkey Classic Monday afternoon at the Dothan Civic Center.