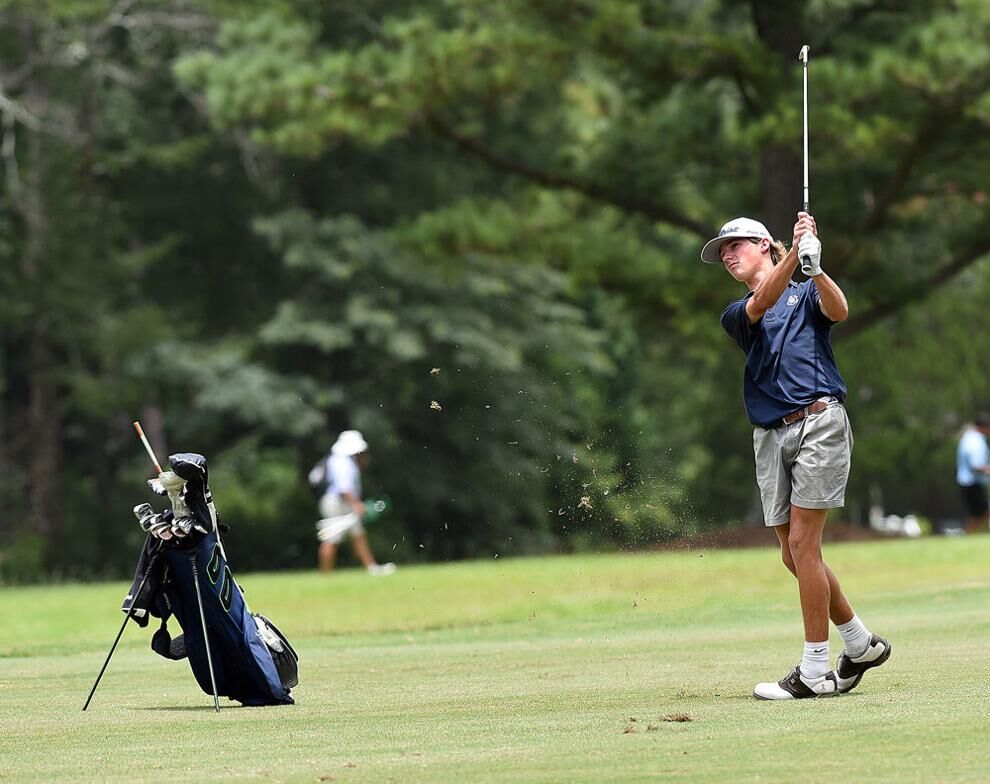 Carter Loflin is shown during his final round victory in the 2020 Press Thornton Future Masters at the Dothan Country Club. Loflin returns to defend his title at this year’s Future Masters. 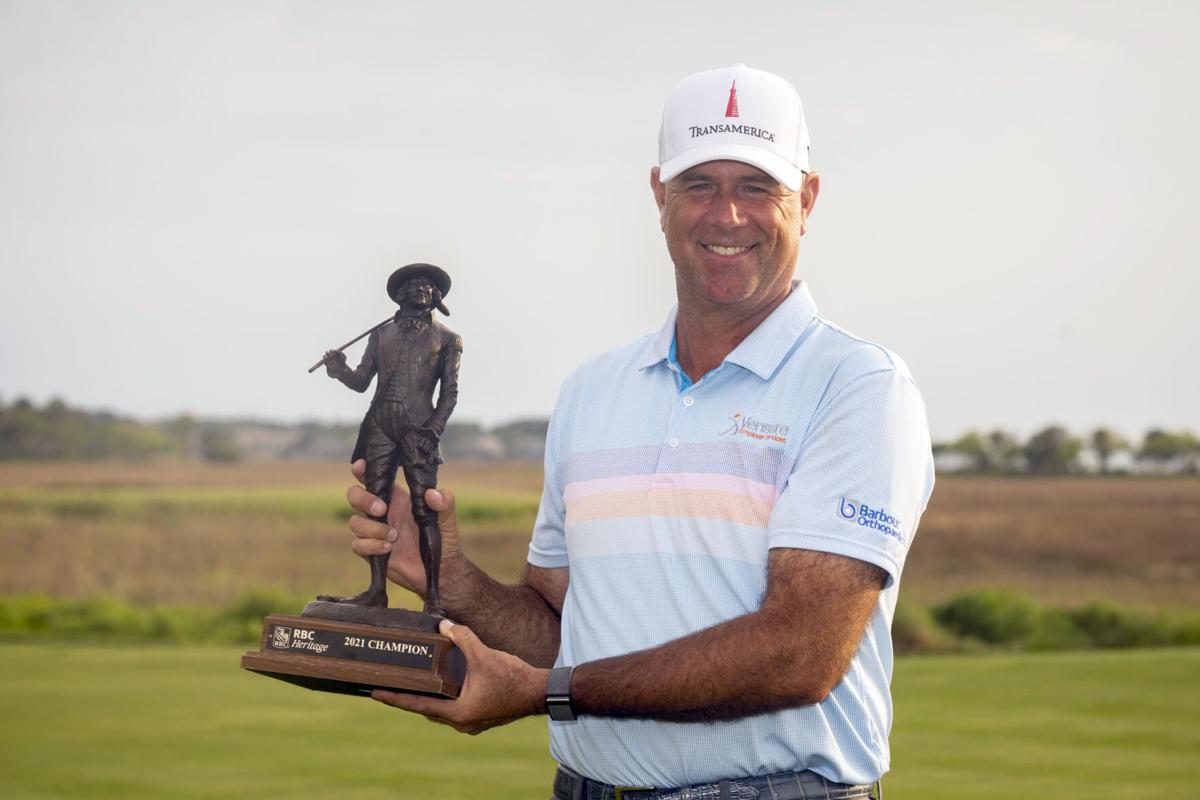 “I think playing against the best players in any sport is where you really find out what you’re made out of, and that’s what the Future Masters offered me,” Cink said. “It’s a step along the way in your progression towards becoming a professional golfer if that’s what you so choose to do, and a lot of kids playing the Future Masters will do that.”

Speaking to a gathering at the Dothan Country Club on Thursday via a Zoom video conference, Cink talked about his two wins in the prestigious junior tournament, while also speaking on his friendship with Carter Loflin, who won the tournament last year and is returning to defend his title in several weeks.

“Carter and I go back a long time,” Cink said. “Literally his mom came to us and said, ‘I’m going to have another one’ and that was Carter Loflin.

Loflin, a University of Georgia commit, will be trying to repeat as champion as did Cink, but obviously it will not be easy task.

“The depth of the field is just only getting better everywhere at every level,” Cink said. “The repeat wins like I had back in the 90s will become more rare just because of the sheer likelihood of others winning.

“It’s just a numbers thing. Carter is playing in a big tournament this week up here in Atlanta, so he’s testing himself against older people. But he’ll be ready to go come Future Masters time and I’m sure he’ll do just fine.”

Cink, a native of Florence who now lives in Duluth, won in 1990 in a down-to-the-wire battle against Daleville native Brian Gay, a longtime player on the PGA Tour.

“Especially that first one gave me the confidence to know that I belonged – I was one of the big fish,” Cink said. “We just hit good shot after good shot coming down the stretch and I just ended up being the one that eked it out by one shot over him. It propelled both of us to a lot of confidence in the coming years.”

In 1991, Cink and Chris Couch, another who reached the PGA level, were tied going into the final round and tied when their 18 holes were finished.

In a sudden-death playoff which began on No. 6, Cink went into the rough on his first shot and was about 10 yards short of the green on his second. From there, he chipped in for a dramatic victory.

“When I came in at (age) 18 I was probably the, or one of the top three favorites, and then to back that up and really pull through,” Cink said of what it meant to win. “At that point I switched roles from being sort of the local nobody to being the guy with the expectations.

“Either way it’s a part of golf to sort of conquer those emotions. To sort of feel like you don’t fit in and then accomplish (a win) and then also to be the guy that is expected to win and you do – those are two big, big jumps for me at that age.”

Big crowds aren’t the norm in junior golf, but it is at the Future Masters. Learning to play in that environment is another building block for young golfers.

“When you’re really young, you’ve got to deal with mom and dad, and then you have to deal with your peers,” Cink said. “Dealing with fans and with strangers watching you and inevitably kind of judging you too is something that you just have to learn how to do.

“It was cool to have that experience in Dothan. I quickly learned that paying attention to what they thought about me really didn’t matter. I learned quickly the best thing I could do is focus on what I could control, and that did not include the gallery. It taught me for sure how to compartmentalize my focus.”

The 72nd version of the tournament will offer other young golfers from throughout the country and world the same sort of challenges Cink encountered.

“We selected the field May 1 and we still have over 270 kids still trying to get in on a waiting list currently, who would come at the drop of a hat if we call them,” tournament director Kevin Klein said.

“Despite COVID and all the travel restrictions, we still have 30 states represented and five different countries. Georgia leads the way with 108 players. Internationally we’ve got Canada, Puerto Rico, Panama, Australia and South Africa as well as the United States represented.”

Locally, there are seven players entered in the 15-18 division: Mason Crowder, Jake McDonald, Brantley Scott, Matthew Streitman and Luke Thornton as Dothan natives, and Gibson Charlton from Enterprise and Jackson Cleveland from Troy.

There are three Dothan players in the 10-under division – Wiley Alford, Douglas Lee and Mac Steltenpohl.

“Steven Smith (DCC course superintendent) has done a tremendous job on the golf course,” Klein said. “He’s going to have these guys talking about these greens speed. We’ve also done some work to the 11 and 13 tee boxes. We’ve added a little bit of length back there to make it a little bit more of a challenge.”

Look to the Chargers and Seahawks to make the playoffs

Alabama State Games set for this weekend in Wiregrass

Ron Creel is a stickler for details, thus he showed patience and understanding as a board member approached him and noted her T-shirt for the …

Ozark’s Claassen back on DCC course

The 2-over-par 72 opening round score wasn’t exactly what Cole Claassen was hoping for, but there may not be anyone happier on the Dothan Coun…

Carter Loflin is shown during his final round victory in the 2020 Press Thornton Future Masters at the Dothan Country Club. Loflin returns to defend his title at this year’s Future Masters.