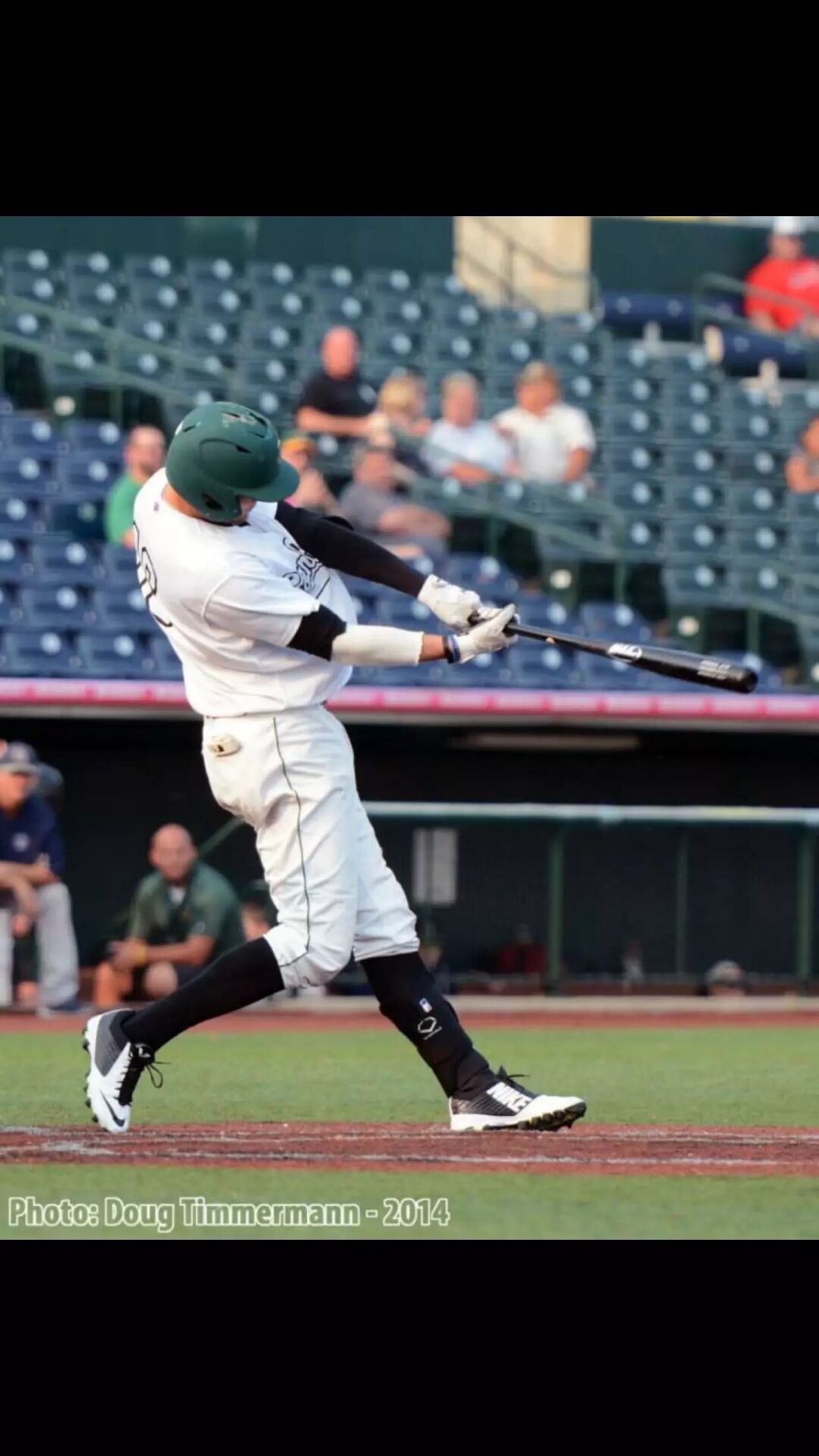 Former Carroll High and AUM standout Sam Judah connects on a pitch while playing for the Normal (Ill.) Cornbelters Independent League team. Judah was recently named AUM's Player of the Decade in baseball for 2010-19. 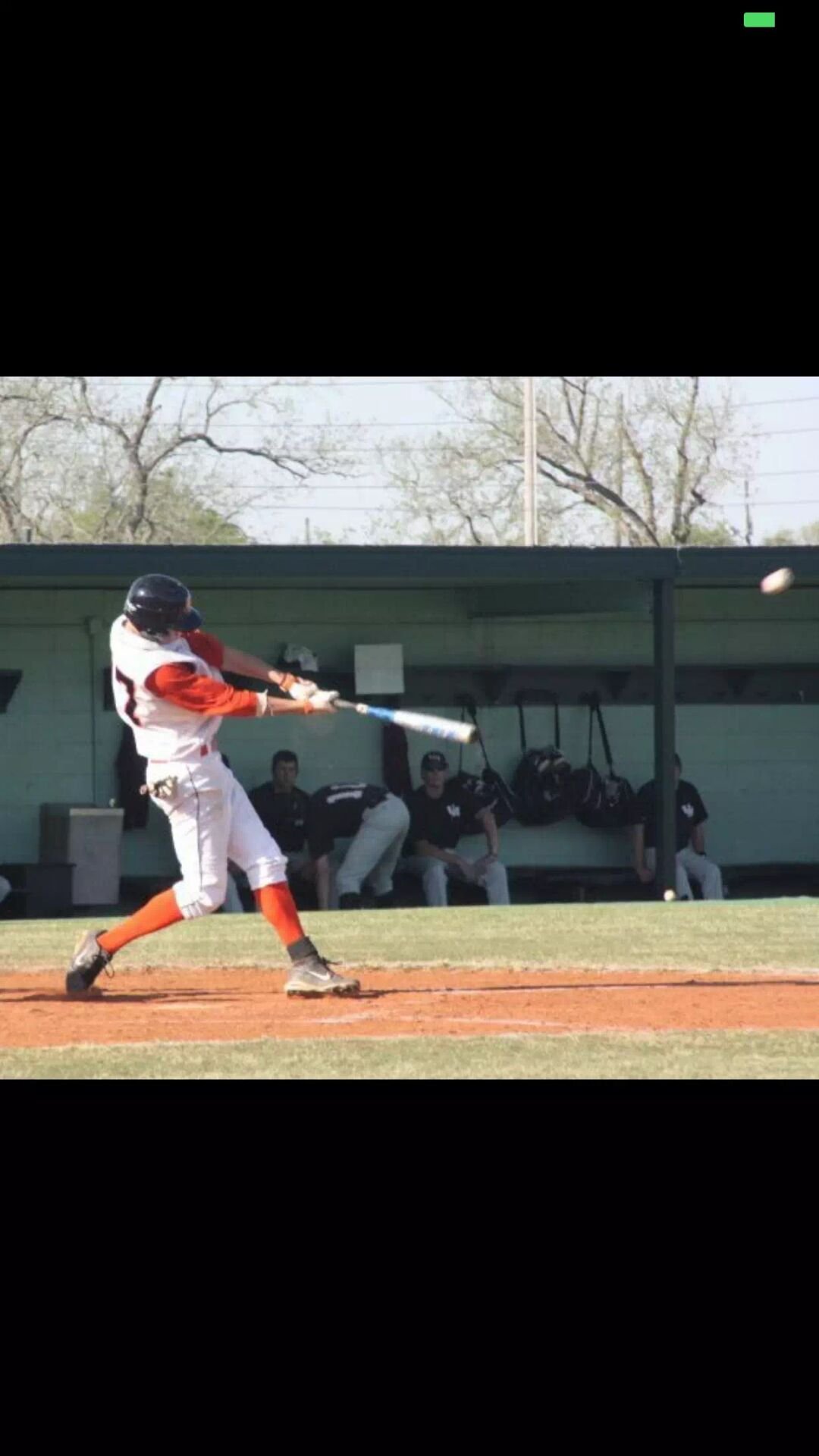 Former Carroll star Sam Judah makes contact at the plate as a member of the AUM Warhawk baseball team. Judah was named to the AUM All-Decade Team along with Opp's Cody Hall and Slocomb's Brady Eldridge. Judah was also named the Decade Player of the Year.

In late July, former Carroll High baseball standout Sam Judah got a text from a friend congratulating him on a big honor.

Judah, who played baseball at AUM in 2010-11 and later in several independent professional leagues, wasn’t sure why he was being congratulated.

He soon found out from the friend why – Judah was chosen as the AUM Player of the Decade (2010-19) for baseball.

“Actually one of my buddies I played with sent me a text, ‘Hey congratulations,’” Judah said. “I was like, ‘what are you talking about?’ He sent me a picture and I saw the article and read it. It brought back a lot of memories from those days of playing.

“Kind of felt like a joy. I put in a lot of work in those two years. For me to be represented like that kind of shows how hard I worked and that it paid off. It was a lot of happiness. It means a lot, I can tell you that.”

The school also named a 14-player all-decade team in the sport. Judah, a pitcher-outfield was part of that as well, and was joined on the team by two other players from the Wiregrass – Cody Hall of Opp (2011-12) and Brady Eldridge of Slocomb (2015-16). Both Hall and Eldridge were among the six pitchers chosen to the team.

Judah was selected the best of all the players for the decade.

“It is such an honor,” Judah said. “There are so many people to thank, my parents and to coach (Q.V.) Lowe for giving me the opportunity along with (assistant) coach Marty Lovrich, who is now the head coach.

“I was fortunate enough to play for a great program with a bunch of great guys who were competitors. It wasn’t just me. If it wasn’t for my teammates, none of it would have happened. I am thankful to them.”

In 108 career games over two years at AUM, he posted a career .379 batting average with 13 home runs, 92 runs batted in and 154 total hits. He also had 32 doubles, 10th most in program history despite playing just two years at the four-year school, and scored 71 runs.

As a relief pitcher, Judah earned 14 career saves, including 11 in the 2011 season. The career save total is tied for third best in program history, while the 11 saves in a season ranks fourth in Warhawk history. He finished with a 2-1 record and earned 45 strikeouts in 36 1/3 innings.

While at AUM, he was a two-time Southern States Athletic Conference first team All-Conference member

Judah credited Lowe, AUM’s longtime hall of fame coach, for most of his success.

“I think playing in that environment where you were relaxed and he had your back no matter what – he wouldn’t cuss you or on you. When you did mess up, he called you into his office, but other than that he let you relax and play and I think that was big part of my success at AUM, just playing for someone who let you relax, have fun and play the game the right way.”

But Judah said Lowe did more than teach him the finer details of the game.

“He taught me more about how to be a man than how to be a baseball player and I will always be grateful to that guy for that,” Judah said.

During his first year at AUM, Judah terrorized opposing pitchers. Overall in 50 games, he hit .428, the best average of the decade for the Warhawks and fourth best overall in program history, and earned 83 hits, including nine home runs and 21 doubles. He also drove in 56 runs and scored 43 runs.

The 21 doubles rank still fourth most in program history and his average of 1.66 hits per game ranked 13th nationally in NAIA Division I that year. He had multi-hit games in nearly half of the games (24 of 50) and had a 19-game hitting streak in one stretch. His batting average, homer and RBIs were all team highs.

He also appeared in 12 games on the mound that year, finishing with a 1-1 record with three saves. Opponents hit just .219 against him over 17 2/3 innings.

“My junior year definitely was hitting,” Judah said of his highlights. “I had a good year at the plate. Senior year was a little of a down year (offensively). I still ended up hitting .335, but I put it together on the mound. I had 11 saves. I didn’t have a great year hitting, but I was able to contribute to the team pitching-wise.”

After his AUM career, the 6-foot-4, 200-pound Judah played six seasons of independent pro ball, starting in the summer of 2011 in the North American League for the Lake County Fielders in Zion, Ill., just north of Chicago.

He then played one season each in the Frontier League for the Normal (Ill.) Cornbelters and the Sioux City (Iowa) Explorers of the American Association before returning to the Cornbelters in 2014 and 2015 and finishing his career with the Cam-Am League Trios-Rivieres in Quebec, Canada.

He finished his six-year career with a .275 career average (369 hits in 1,344 at-bats) with 27 homers, 205 runs batted in and 80 doubles. He made five pitching appearances, covering seven innings, and had no decisions or saves.

His best season was in 2014 with the Cornbelters when he was a Frontier League All-Star and a three-time league player of the week honoree. He finished that year with a .307 batting average, 13 home runs, 27 doubles and a franchise-record 82 runs batted in over 94 games.

One of the highlights to Judah came in Sioux City when Hall was also part of the Explorers.

After retiring from baseball, Judah helped coach at AUM for three years then at Parkland Community College in Illinois, where he was part of a World Series NJCAA team that finished third. He helped coach a year of high school at Charles Henderson in Troy in 2018 and last year at LSU-Shreveport.

He recently got out of coaching and is now in sales in Dallas, Texas.

Opp’s Hall, who played at AUM in 2011-12, won a decade-high 17 games over his two-year career with the Warhawks and posted a 2.05 earned run average that ranks second in program history. Hall also amassed 212 strikeouts that rank third all-time at AUM.

The year before, Hall had an 8-3 record with a 2.90 earned run average and 86 strikeouts to 20 walks in 90 innings pitched. He had six complete games and three shutouts. He earned SSAC All-West Division Team honors.

Slocomb’s Eldridge, who played at AUM in 2015-16 after two years at LB Wallace Community College, tallied an 8-4 record out of the bullpen in his two seasons, finishing with a 2.67 career earned run average and striking out 61 batters in 70 2/3 innings.

In 2015, the Slocomb native recorded a 2.27 ERA with three saves, including an eight-out save against Faulkner University in the SSAC Championship game. In that final year, he had a 4-2 record with a 2.90 ERA and 33 strikeouts in 31 innings.

Former Abbeville High three-sport star Jeremiah Harris was just hoping for a chance when he arrived on the Jacksonville State campus in 2017.

Jimmy Rane had a blast at the Talladega Superspeedway, much more so than he did on his first trip to the venue many years ago.

Former Carroll High and AUM standout Sam Judah connects on a pitch while playing for the Normal (Ill.) Cornbelters Independent League team. Judah was recently named AUM's Player of the Decade in baseball for 2010-19.

Former Carroll star Sam Judah makes contact at the plate as a member of the AUM Warhawk baseball team. Judah was named to the AUM All-Decade Team along with Opp's Cody Hall and Slocomb's Brady Eldridge. Judah was also named the Decade Player of the Year.