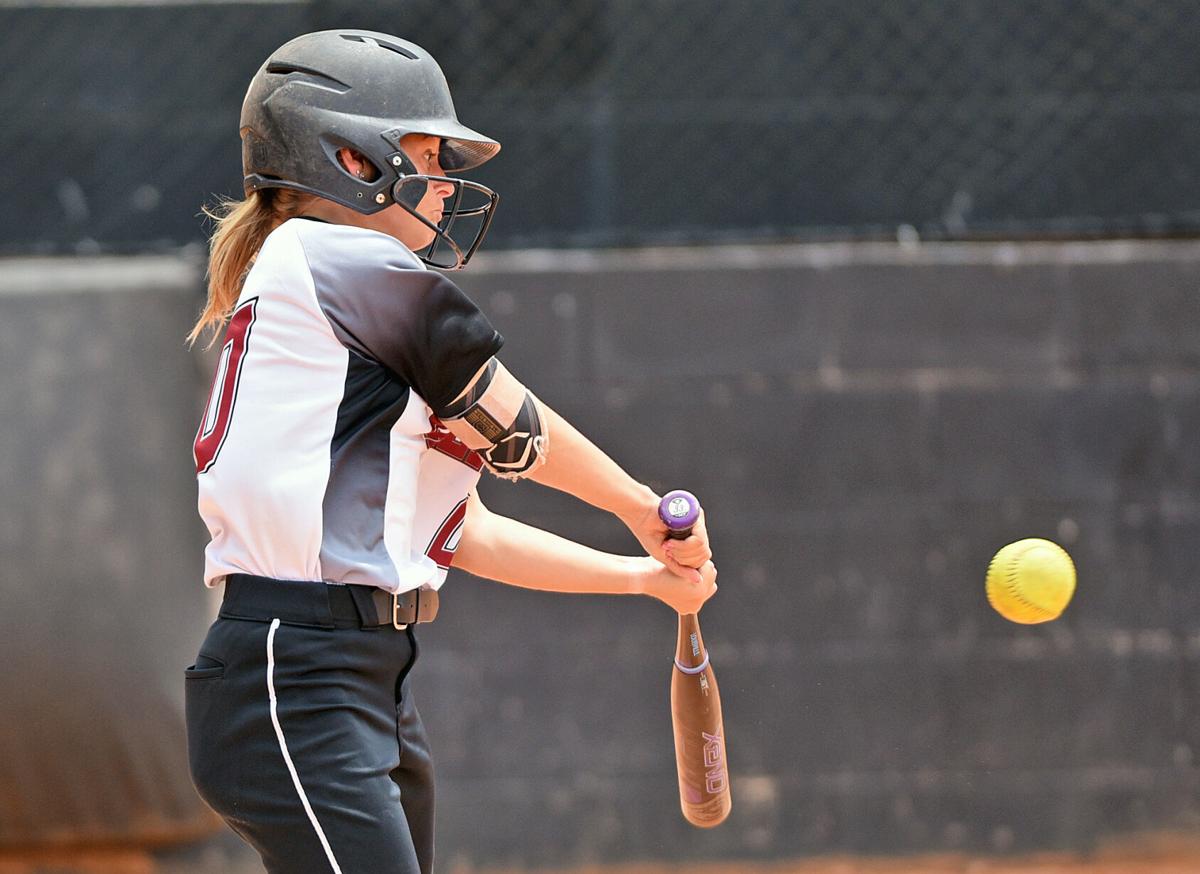 Wallace Community College’s Carlee Colbert gets a hit during a game Thursday against CVCC at the Wallace campus. 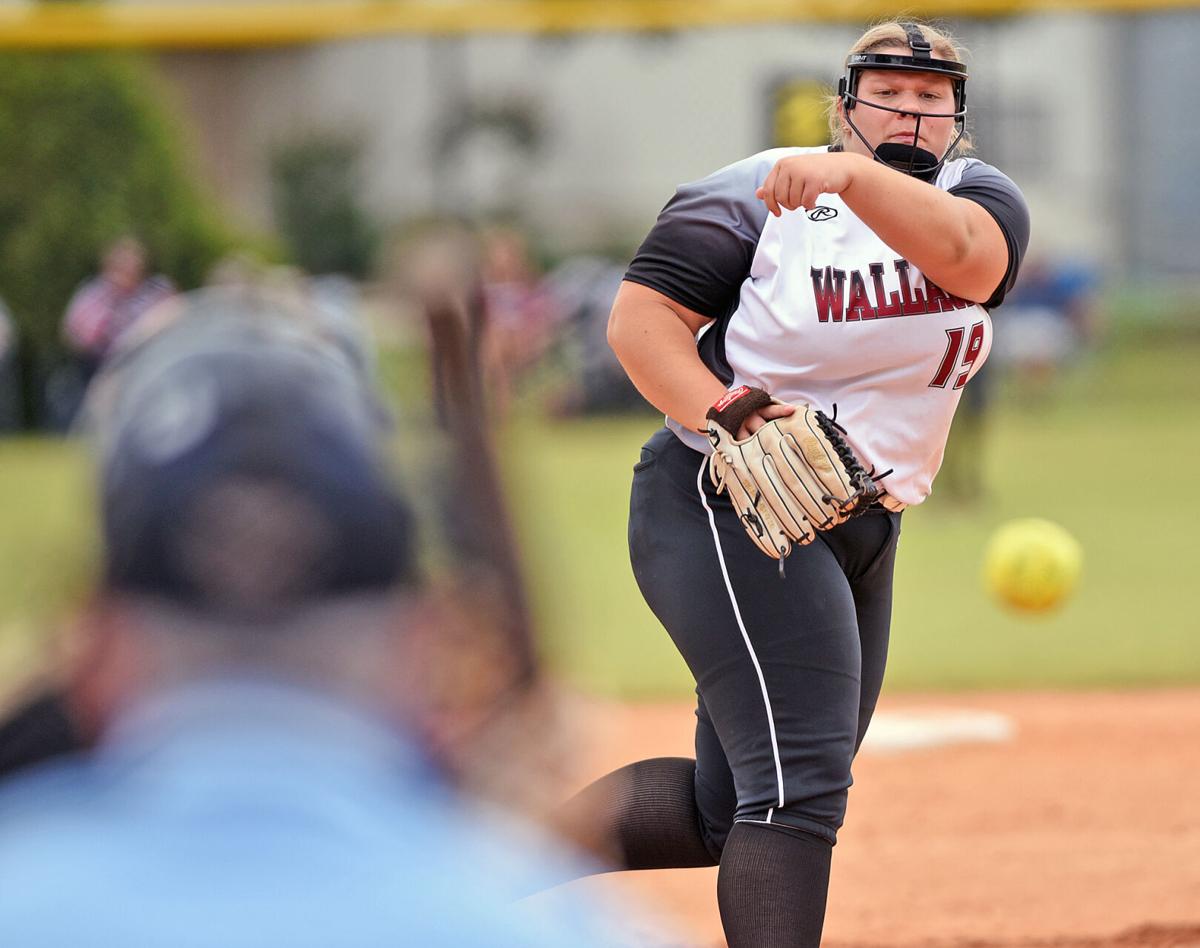 Wallace Community College pitcher Caroline Capps makes a pitch during a game against CVCC at Wallace on Thursday.

The Wallace Lady Govs split a doubleheader with CVCC in the regular-season home finale Thursday, holding on for an 8-7 win in the opener before dropping a heart-breaker 5-3 in the second game.

The end of Game 2 appeared headed to extra innings when sophomore Asia Jones lifted a two-out drive over the left field fence that at first glance looked to be a two-run homer before it was ruled just foul by the home plate umpire.

Wallace College coach David Russo, normally mild-mannered, couldn’t hold back his emotion in arguing the call, but to no avail.

Jones, who connected on a two-run homer in Game 1, struck out to end the doubleheader. The former Cottonwood star is a third-year sophomore who took advantage of the extra year of eligibility granted by the NJCAA due to the COVID-19 pandemic shutting down the season last year.

“A couple inches and we would still be playing,” Russo said afterwards. “The young lady who allegedly missed that home run by two inches has been through the promise land with us.

“She was here when we finished fourth in the nation and went to the World Series. That would have just been poetic for her to hit that home run to tie it.”

The Lady Govs came into the contest just ahead of CVCC for third place in the Southern Division standings. Wallace is now 17-10 in division play, 38-17 overall, while CVCC is 15-12, 22-28 overall.

The two teams play a doubleheader on Saturday in Phenix City to conclude the regular season.

Both teams will be playing for seeding position in the upcoming state tournament.

“This year with the pandemic and everything, (seeds) three through six play a single elimination, so this is really big more so than ever,” Russo said of where you finish in the standings. “The bottom line is everybody is going to be good who is there.”

In Game 1, CVCC jumped out to a 3-0 advantage after striking for a run in the first inning and two in the third.

But Wallace mounted a comeback in the next two innings.

In the bottom of the third, Jones scored on an infield hit by Peyton Rodie to get Wallace on the scoreboard and the Lady Govs pulled closer when Carlee Colbert sent a single between second base and shortstop to score Anna Poland, who had walked earlier in the inning.

After pitcher Caroline Capps retired the Pirates in order in the top of the fourth, Wallace struck for four runs in the bottom of the inning to take the lead.

After Madison Brown reached on an error and K.J. Braswell moved her over on a sacrifice bunt, Jones hit a two-run blast over the right-center field fence to give the Govs a 4-2 lead.

Emma Houston would score on a wild pitch four batters later with Rodie at the plate and Rodie delivered with a single to left field in scoring Grayson Laney to make it 6-3.

CVCC plated a run in the fifth to make it 6-4, but Wallace added two big runs in the sixth when Poland scored on an RBI double by Rodie and Colbert scored when Halie Jones ripped a single to left field to make it 8-4.

CVCC, however, went down fighting. After relief pitcher Josie Ingle got strikeouts on the first two batters of the seventh, a single and walk set up a three-run homer by Desalynn Nesbitt and just like that it was an 8-7 game.

Two straight hits put more runners on before Ingle got a fly out to deep center field to end the game.

In Game 2, Wallace got the early 2-0 lead when Meagan Smith singled in Poland and Laney in the second inning.

The Govs then got sloppy in the field in the third and CVCC took advantage with three runs to go up 3-2 despite two singles being the only hits in the inning as Wallace committed several errors in the field during the frame.

“We played great ball 13 out of 14 innings,” Russo said. “That inning we kicked a couple and that kept them in the game. But we battled back.”

In the bottom of the third, Asia Jones led off with a single and Emma Houston doubled off the center field fence. After Poland fouled out, Laney dropped down a bunt and was thrown out at first, but Jones broke home on the play and beat the throw to tie it at 3-3.

CVCC, however, regained the lead in the top of the seventh off Wallace starter Mary Michael Burnham when Carolyn Carter singled up the middle to score two runs and make it 5-3.

In the bottom of the inning, Smith walked and went to second on a bunt out by Brown. Braswell then flew out to left field and Asia Jones struck out after almost tying it with the long drive that was ruled a foul.

Megan Blackmon got the win in the circle for CVCC.

NBA Finals: What is the best result for the books?

Should there be concern around the Yankees?

Should there be concern around the Yankees?

Alabama State Games set for this weekend in Wiregrass

Ron Creel is a stickler for details, thus he showed patience and understanding as a board member approached him and noted her T-shirt for the …

Ozark’s Claassen back on DCC course

The 2-over-par 72 opening round score wasn’t exactly what Cole Claassen was hoping for, but there may not be anyone happier on the Dothan Coun…

Wallace Community College’s Carlee Colbert gets a hit during a game Thursday against CVCC at the Wallace campus.

Wallace Community College pitcher Caroline Capps makes a pitch during a game against CVCC at Wallace on Thursday.